This was going to be a very short post, because I thought that if I tried to write a longer post, I’d stroke out, Schumer ticks me off so much. But now it’s going to be slightly longer, because Schumer’s concept blew up after I started to write the post: None other than Elizabeth Warren has chimed in to support Schumer with, naturally, a plan, and Sanders has endorsed the concept of “essential workers.” So it looks like the Democrat Party is bestirring itself to propose an exciting program of complex eligibility requirements to aid a subset of workers on a temporary basis. As one does. But first let’s survey the zeitgeist:

Let’s start with a banner from Sunnyside in Queens, New York:

A nice sign from a very sunny Sunnyside pic.twitter.com/Zl86n5ZdjZ

The rainbow is cute, and the sentiment is surely not ill-intended, but “essential” workers?

Here’s another example (there are a ton):

I didn’t know there was such a thing as a “gratitude rock.” But again, “essential workers”?

And then there are the heartwarming jokes:

For the kids out there who may have been concerned, I have some reassuring news: Today I officially proclaimed the Easter Bunny an essential worker in Maryland. He therefore will be able to proceed with his hopping across the state, delivering Easter baskets to Maryland children. pic.twitter.com/Ul7jJoz99K

And of course the heartwarming commercialization:

? #Contest George is grateful that the #Easter Bunny is an essential worker that he wanted to hold a #cookie contest! RT &amp; comment 3 things that you are grateful for! Winner will receive a Small George Box. ? *Open to Canadian residents, must follow to qualify* #CookiesByGeorge pic.twitter.com/0jMDHh6rAI

Sometimes “essential workers” are reconceptualized as “front line” workers, so we can adopt a militaristic frame:

The Air Force Thunderbirds honored health care workers and first responders on the front lines of the coronavirus pandemic with a flyover above the Las Vegas Strip. https://t.co/jSNBbbjf0w pic.twitter.com/qMc3RjSg1b

And while the Air Force is doing its flyover only in support of health care workers and first responders, the “front line” worker concept is more capacious:

Leilani Jordan said she wasn&#39;t given gloves or hand sanitizer.

Is this what America is about? Or will we fight for protective gear, hazard pay, and paid sick leave for all frontline workers?https://t.co/rpkOV0z69B

(Note the source.) But consider this billboard in Memphis, and the commentary thereupon:

I bet those folks would prefer we come out of this with $15/hour, a union and paid leave over a billboard.

Congressional Democrats are trying to add $13 per hour hazard payments for frontline health care workers up to a total of $25,000 in the next coronavirus relief package, along with $15,000 incentives for people who join the medical workforce surge during the pandemic.

Senate Minority Leader Chuck Schumer said a so-called Heroes Fund could compensate nurses, EMTs and other workers for unanticipated risks as they confront a flood of new cases. Some workers have unsuccessfully sought payments from cash-strapped hospitals and other employers experiencing a downturn in business from lockdowns and cancelations of nonessential procedures.

“No proposal will be complete without addressing the needs of our essential workers by giving them hazard pay,” Schumer said on a call this week with reporters.

Doctors, nurses, and essential workers are putting their lives on the line every single day of this fight@SenateDems are proposing a bold, new program to boost premium pay for America’s frontline workers

We’re calling it a “Heroes Fund” because that’s who it’s for:

Note that Schumer makes the equation between “essential workers” and “front-line” workers, but does not define his terms except to imply that they not doctors and nurses. (Sanders includes grocery workers.) So right off the bat Schumer has complex eligibility requirements, much beloved of liberals, first because Schumer has to classify workers into “essential” and not “essential,” and second because you just know it’s all going to be means-tested. (I mean, if some trucker makes too much money, we don’t want him in the program, right?)

Before going on to the foundational problems with Schumer’s “Heroes Fund,” let’s take a brief detour into the plan that Warren has nimbly whipped up, where naturally the problems are in fine print: 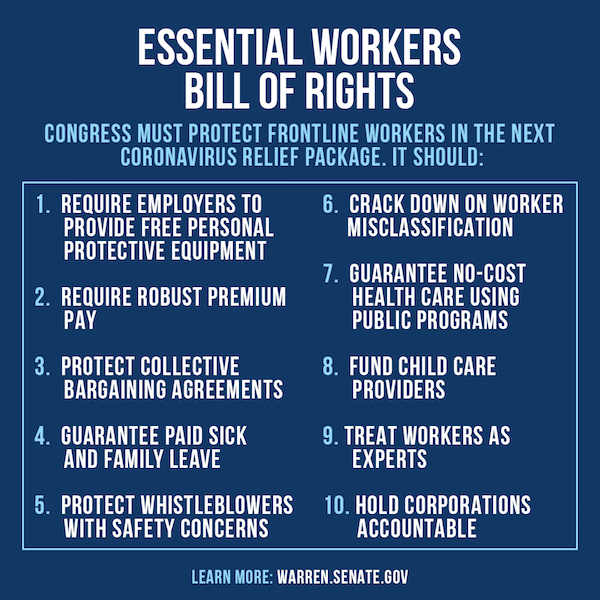 Leaving aside that there’s to be no Bill of Rights for workers who are not “essential,” look at #3: Collective bargaining agreeements are protected, but union formation is not encouraged (See again, the commentary on the Memphis billboard above). And #7: “No cost health care” for the duration of the pandemic, correct? Or are we now to have #MedicareForAll on a permanent basis, but only for “essential” workers? And so forth. Back to the problems in Schumer’s proposal. I can see at least three.

1. The distinction between essential and non-essential is impossible to make, and wrong

Chuck Schumer said Essential workers like Truck Drivers should get $25000 in hero fund??? Is this true? If so all I can say is finally the Truckers of America is being recognized. Because without us none of you would get anything. No food, medical supplies,ppe,fuel ECT!!

(Interesting to see how Schumer’s proposal got translated; clearly, $25,000 made it right through.) But the answer to “Is this true?” is “Nobody knows.” Schumer doesn’t talk about truckers. Sanders talks about grocery workers. Here’s another example:

So you can imagine the sausage-making here, as Congress determines which workers go to Happyville (are “essential”) and which go to Pain City (“not essential”).

Fortunately, the trucker provides a way out: “Because without us none of you would get anything.” But that applies to all workers. All workers are essential. (In other words, Tlaib has the right approach, not Schumer, unsurprisingly.)

2. The “front lines” are everywhere.

Imagine a nurse, who everybody agrees is essential. She works late, and needs a ride home. Is the cab driver essential? The cab driver needs to stop for gas. Is the attendant essential? The nurse orders a pizza when she gets home. Is the delivery person essential? I would argue that yes, they all are (since they are all essential to, as the Bearded One would put it, reproducing the nurse’s labor power, so they can go to work again the next day.) So where is the front line? Is at the nurse’s hospital? Surely so. But suppose she caught the virus. Then the front line is in the cab, at the gas station, and at the nurse’s front door, on the door-knob. And the cabbie, the attendant, and the delivery person are all on the front line too! So only the nurses gets a cut of the Heroe’s Fund? Wasn’t the cabbie a hero too, for picking up a nurse that could infect him? Or the delivery person, if they knew where the nurse worked?

3. All workers are heroes.

There’s no question the pandemic is bad, and that all workers are heroes for working through it. But there is a larger framework to consider. I don’t know if any of you remember as far back as ten years ago, but we had another Crash back then. Calculated Risk used to run a regular chart called the “Scariest Jobs Chart Ever.” Here’s an example: 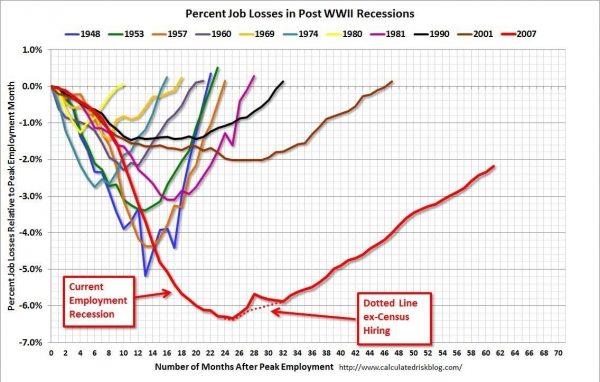 The red line is unemployment, and as you can see — and perhaps you remember — unemployment was very deep, very long to “recover,” and when it did, wages and working conditions weren’t as good as they were before (due to Obama’s miserably inadequate stimulus package, failure to address foreclosures, and failure to reform the FIRE sector instead of simply rebooting it, among many other policy failures). If you did live through that “scary” time, do you remember the millions who lost their jobs? The millions who lost their homes? The broken marriages? The suicides? I say all the workers who lived through those horrible years are heroes, and yet, c’est normal, no medals for them, no “Heroes Fund,” even though it was as destructive as any war. And everyone suffered, “essential” or not.

Schumer’s “Hero’s Fund,” if passed, would be insanely destructive of working class solidarity. It would create a “two-tier” system not just for a rancid contract from a corrupt business union, but for the entire country, in which “essential workers” were a legally classified labor aristoracy. Sanders, of all people, should see this divide-and-conquer proposal for what it is: An effort to set the working class at each others’ throats over wages and working conditions at a time when class solidarity, as shown by the rising wave of strikes, is most essential, and I am extremely disappointed that he supports the concept. I hadn’t thought his campaign was about deeming only a subset of the working class essential.