Yves here. I am old enough to have read the Wall Street Journal op-ed where Juanita Broaddrick gave a detailed account of Bill Clinton’s rape in the print edition. It was so credibly detailed, and Broaddrick had contemporaneous witnesses, that I was convinced it would spur lots of follow-on coverage. Boy, was I wrong.

BTW, this account skips over a detail I remember from the Broaddrick’s Wall Street Journal account (which I not only read several times, but discussed with quite a few friends ): Clinton grabbed, her, spun her to face him, pulled her close, and bit her lip to prevent her from pulling away as he pushed her on the bed. This is the sort of move that no woman would think to make up, and also shows how practiced Clinton was at sexual abuse. The op-ed, under Broaddrick’s name, is peculiarly not findable in an internet search (the search function on the WSJ site itself goes back only four years). That version contained the detail that Clinton lay on top of her for close to 20 minutes, and came a second time, but it was a shudder, more the sexual version of an afterthought.

One line victim-trashers often take is “Why didn’t she scream? Why didn’t she fight him off?” If you listen to the Tara Reade account, it was clear it happened very quickly and Biden backed off when he realized Reade was uncooperative. With Broaddrick, she was in a hotel room, with no one in earshot (and how well can you holler if some has your lip between his teeth?), with Clinton having hurt her to get his way and clearly capable of doing so again. And they were both their bosses, figures they regarded with esteem and probably fear.

Another big issue is women get extraordinarily strong cultural programming against using violence. That usually makes a lot of sense; men generally have a size and strength advantage over women and can usually beat the shit out of them in a fight. But now that I am in the room trying to work while crime shows are on (usually with the sound off), I too often see women, even supposed cop women, acting like fragile flowers when a gun or knife is pulled on them (the convention is only a tiny number of ninja fighter women, usually but not always Asian but always trim and capable of wearing a catsuit, get to be physically aggressive). There have been too many scenes I’ve witnessed where the law enforcement woman was not physically restrained (not pinned, hands free), where the attacker was at arm’s length, and in the cases with a gun, trigger not cocked. They are clearly about to be killed but instead of doing something sensible, like lunging to gouge out the perp’s eyes, they go all weep-y and plead-y, which per convention buys them enough time for their rescuers to come and save them. 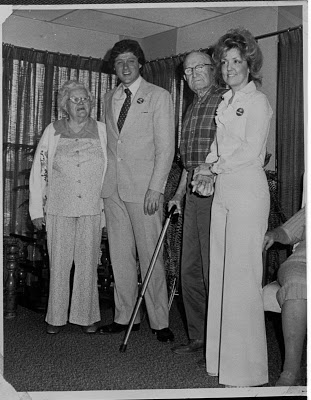 Juanita Broaddrick, right, with residents of her Arkansas retirement home and Bill Clinton in April 1978, the same month she alleges that Clinton assaulted her (source)

Hid among the grease and grime of the Tara Reade rape discussion — “Should we believe her? To what extent? Would Biden really do such a thing? But what if a public discussion leads to Trump’s reelection?” — lies the shadow of another rape accusation.

Undiscussed, rarely brought up, as carefully hid or moreso by the Democratic Party–supporting media as the Tara Reade story was, stands the rape charge by Juanita Broaddrick against 32-year-old Arkansas Attorney General Bill Clinton, a rape said to have occurred in 1978.

The facts are these (source: a nicely researched 2017 piece by Dylan Mathews at Vox). First, this is what Broaddrick says happened:

In 1978, Broaddrick was volunteering for Clinton’s gubernatorial campaign, and claims she met him when he visited his campaign office in her home town of Van Buren, Arkansas, that April. She says he then invited her to visit his office in Little Rock, which Broaddrick agreed to do a week later, when she was in the state Capitol anyway for a conference of nursing home administrators. Once she was at a hotel in Little Rock, she claims Clinton told her that he wasn’t going to the campaign headquarters and offered to meet her in her hotel lobby coffee shop instead. Once he arrived, she says he called her room and suggested that they have coffee there, since the lobby had too many reporters. Broaddrick says she agreed.

As she tells the story, they spent only a few minutes chatting by the window — Clinton pointed to an old jail he wanted to renovate if he became governor — before he began kissing her. She resisted his advances, she said, but soon he pulled her back onto the bed and forcibly had sex with her. She said she did not scream because everything happened so quickly. Her upper lip was bruised and swollen after the encounter because, she said, he had grabbed onto it with his mouth.

“The last thing he said to me was, ‘You better get some ice for that.’ And he put on his sunglasses and walked out the door,” she recalled.

Broaddrick’s story has no third-party witness, but quite a lot of contemporaneous corroboration:

• The director at the nursing home where Broaddrick worked told reporters “that she entered the hotel room shortly after the assault allegedly took place, and ‘found Mrs. Broaddrick crying and in ‘a state of shock.’ Her upper lip was puffed out and blue, and appeared to have been hit.’ Kelsey elaborated to the New York Times, “She told me he forced himself on her, forced her to have intercourse.”

• In 1999, three of Broaddrick’s friends told NBC News on camera that Broaddrick told them at the time that Bill Clinton had raped her.

• In addition, David Broaddrick “with whom Broaddrick was having an affair … also NBC that Broaddrick’s top lip was black after the alleged incident, and that she told him, ‘that she had been raped by Bill Clinton.'”

Opposed to this evidence lie the usual adversarial questions about why Broaddrick delayed so long to say something, why she chose the time she did to come forward, and what her underlying motives might have been. Bill Clinton was being impeached for the Monica Lewinski affair — pilloried, really, by Ken Starr’s special prosecutor’s office — when Broaddrick’s story was leaked to the public.

The response to this has been that Broaddrick, according to Vox, “had been courted to come forward about the allegations by Clinton enemies for years,” and refused many pleas that she speak out.

“She only came forward after she was interviewed by Independent Counsel Kenneth Starr’s office and her allegation leaked. Broaddrick told the [Wall Street] Journal [here] that NBC News reporter Lisa Myers pursued her for nearly a year before she agreed to an interview, and that she came forward because she wanted to rebut false rumors circulating after her statements to prosecutors (like that David Broaddrick had accepted hush money from the Clintons in exchange for silence).”

In short, if Vox’s account is correct, Broaddrick was almost literally the most reluctant of reluctant witnesses at a time when Bill Clinton was beset on all sides with eager ones.

Did Hillary Clinton Weigh In?

It’s an ugly story, both in the context in which it occurred — the dubiously moral, hypocritical Republican Party assaulting a presidency it never considered legitimate using charges they themselves were guilty of at the time — and in the Broaddrick story itself.

And the ugliness continued, according to Broaddrick, shortly after the event. In a 1999 interview she gave to the Drudge Report and quoted by Vox, Broaddrick said that “mere weeks after the alleged [1978] assault, Hillary Clinton had tried to thank her for her silence on the matter at a political rally.” Broaddrick:

She came directly to me as soon as she hit the door. I had been there only a few minutes, I only wanted to make an appearance and leave. She caught me and took my hand and said ‘I am so happy to meet you. I want you to know that we appreciate everything you do for Bill.’

Here her husband had just done this to me, and she was coming up to thank me? It was scary…I started to turn away and she held onto my hand and reiterated her phrase — looking less friendly and repeated her statement—-‘Everything you do for Bill’. I said nothing. She wasn’t letting me get away until she made her point. She talked low, the smile faded on the second thank you. I just released her hand from mine and left the gathering.

But if Christine Blasey Ford is credible (in my opinion, eminently so), then Tara Reade is credible at the very least — and so is Juanita Broaddrick.

The #MeToo Era: The Briefest of Lights in 40 Years of Darkness

Why bring this up? Because the alleged Broaddrick rape occurred in 1978 — and here we are, in 2020, with many of the same actors, all with the same loyalties, using much the same tactics to silence and sidestep the consequences of almost the same (alleged) crime, the forceable rape of a low-level female political associate by a high-level male with a history of intruding on women.

Has nothing changed for Democratic Party leaders in those 42 years?

It’s almost as though the #MeToo era, two and a half years at most, the briefest of lights in two dark generations, never occurred at all.