Yves here. This post underplays that Jesse Ventura wasn’t all that good as governor. For instance:

Ventura had a mixed record as governor. After campaigning on a tax cut, Ventura refunded part of a state surplus to taxpayers — payments he dubbed “Jesse checks.” He oversaw building of the Twin Cities’ light rail and provided more money for schools.

But he also butted heads with lawmakers and seemed to tire of the day-to-day slog of government. Toward the end of his first term he said he wouldn’t seek another.

“There’s no consensus whether he was a bad governor or an average governor,” Smith said. “There is sort of a consensus he was far too egotistical and self-centered, that the whole purpose was to serve his own fame and fortune.”

However, in comparison to Biden….

And recall that Tom was alone in calling Sanders as a possible serious contender in 2016 when he was polling at only 1%. 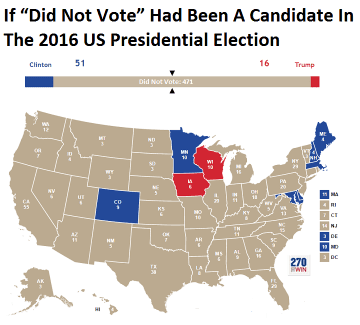 “If I were to become President, these wars in the Middle East would end. War is a money-making scheme done by the military industrial complex. I would start a war on the climate, a war on pollution. If the oceans die, we die.”
—Jesse Ventura (September, 2019)

OK, I’ve decided I’m going to test the waters. IF I were going to run for president, the GREEN party would be my first choice. I’ve endorsed the party and I’m testing the waters. #mondaythoughts #MondayMorning #MondayMotivaton #MondayMood

If indeed he runs, and he keeps talking like this (9:48 in the clip below)…

If I were to become the president, let’s say it that way, these wars in the Middle East would end. I take my foreign policy from Major General Smedley Butler, who wrote the book War Is a Racket, because war is that, it is a racket. It’s a money-making scheme done by the military-industrial complex. Our soldiers don’t fight for the United States; they fight for the corporations.

So to me, I would start a war on the climate, on pollution. I live in Mexico. I’m watching the oceans die before my very eyes. I’ve got news for you, ladies and gentlemen. If the oceans die, we die.

…he’s going to win a lot of votes from the #NeverBiden crowd on the left.

Or if he keeps talking like this: “Wealth distribution is completely out of line today. In fact, people have talked to me about the minimum wage. What about a maximum wage?”

Sounds a lot like Sanders, doesn’t he? He even has Sanders’ mark of authenticity — whatever he looks and sounds like, that’s who he is. Ventura’s also strongly pro-marijuana; listen to the clip starting at 7:22 for the striking reason why.

The whole interview from which this quote came is interesting, by the way, and it’s not terribly long. Aside from his marijuana story and the climate change quote, he discusses President Trump , the current state of the WWE, living without a cell phone, and how and when he will make up his mind about running for office again.

(His comment about Trump: “The first night of boot camp, there’s one person who will break down, wet their pants, cry for their mom. That’s Donald Trump.”)

Ventura, a former Navy SEAL, comes from a strongly libertarian point of view, but if one looks at this compiled list of his issues I don’t see much there besides his quotes on gun control to alienate many pro-Sanders but #NeverBiden voters. He’d have to update (or clean up) his past contrarian positions, but he won’t be the first (for example, Joe Biden) to have to do that ahead of a presidential run.

Tarred with an Alex Jones Brush

Ventura will have problems, of course. In the past he’s been on the record as a 9/11 skeptic and climate change denier, as this 2009 Guardian article shows — note the reference to his since-deleted TruTV show, “Conspiracy Theory with Jesse Ventura” — and there’s his occasional association with Alex Jones. He’ll also get no press, or “what a clown” press only, so he’ll get no good coverage at all that he doesn’t create himself.

On the other hand, he’s rather good at creating coverage for himself. Should he enter the race, Ventura would make an interesting 2020 wildcard — or a dangerous one, depending on your point of view.

I do think if he chose to run, he’d run seriously and to win. As one Minnesota commenter put it in a thread discussing his potential 2020 candidacy (emphasis added):

I voted for Jesse [for governor of Minnesota].

In the days immediately before the election Jesse was polling at 10%. And then he won.

This is because 1) polling models only look at “likely voters,” 2) 50% of the public doesn’t vote, 3) the Dem and GOP candidates were doctrinaire party stalwarts that no one really liked, and 4) the chance for a Fuck You/None of The Above from that 50% was overwhelming as the under 40 vote came out in huge numbers.

I know you said “he won’t win,” but he has and he could again. Trump and Biden are that bad and the Fuck You/None Of The Above vote could be at an all time high this fall.

Now, how was Jesse as governor? I liked him. He was no-bullshit candidate and speaker. He got us light rail and treated the job seriously. Somewhere I have an article that detailed his effectiveness, where someone mentioned that it took the Dems and GOP three years to learn how to team up against him so he wouldn’t be effective and they could prevent the ascendancy of the Reform Party he won on, but now that he’s in the news there’s so many new articles in my search that I can’t find it.

But on bottom line, he did well, and was well liked, and might have won again. He just grew sick of the bullshit politics and decided four years was enough and went on with his life. And I can respect that.

I’m not calling for a vote for Jesse Ventura, just noting that in this train wreck season, another locomotive may soon be added to the track, and not a small one.