Below we’ve embedded an important, high-level presentation on the political reverberations of the Covid-19 crisis by Tom Ferguson, who is one of the top experts on money in politics. I wish we had a transcript, but it’s not as daunting as it looks. Ferguson’s remarks take only the first 45 minutes; the rest is Q&A.

It’s worth your time because Ferguson looks at the official responses to the Covid-19 crisis and explains things that might seem nonsensical, above all, why so many governments are “reopening” even though polls pretty much everywhere say citizens want restrictions in place longer. Ferguson cuts into the problem by focusing on worker safety as the real dividing line.

The short version is “follow the money,” as in big businesses think ending lockdowns will help commerce, when as we know, that’s not proving to be the case. Core observations (at 16:19 and 17:22): 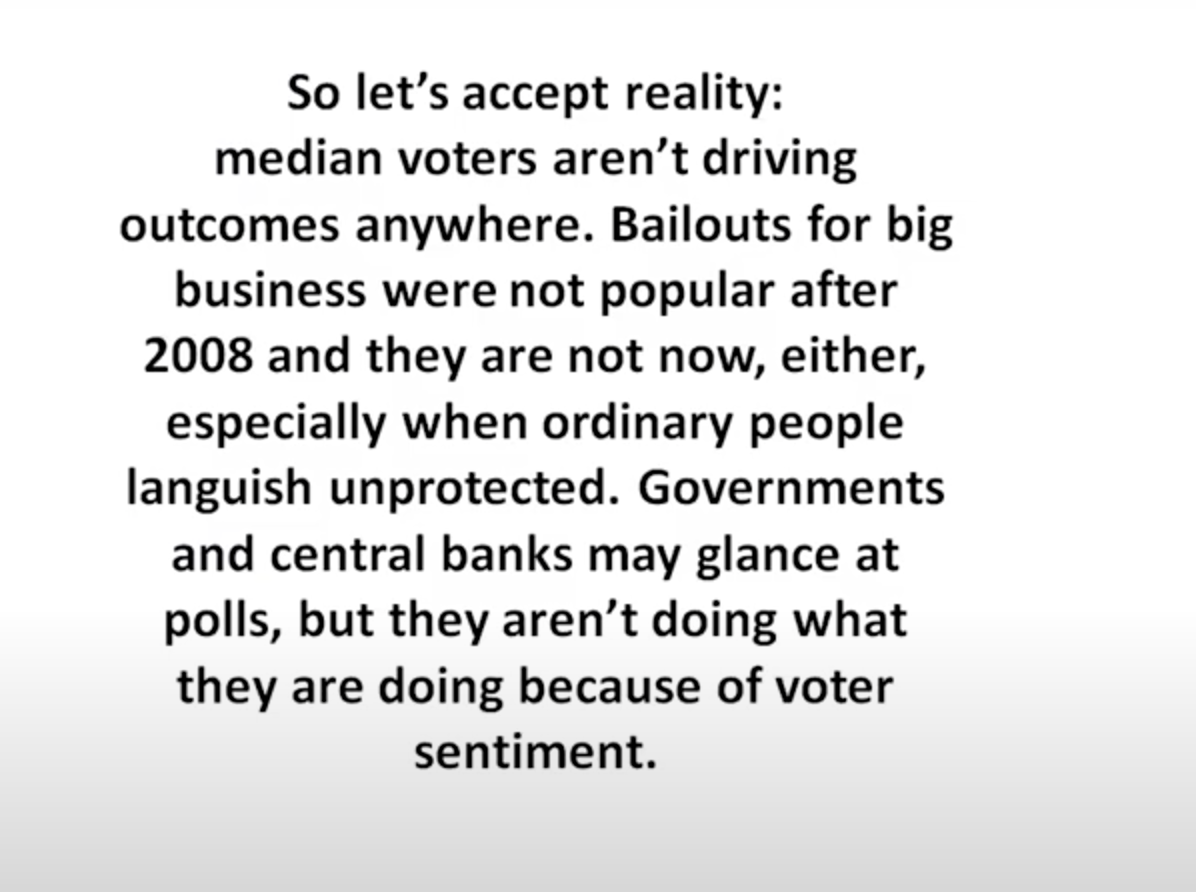 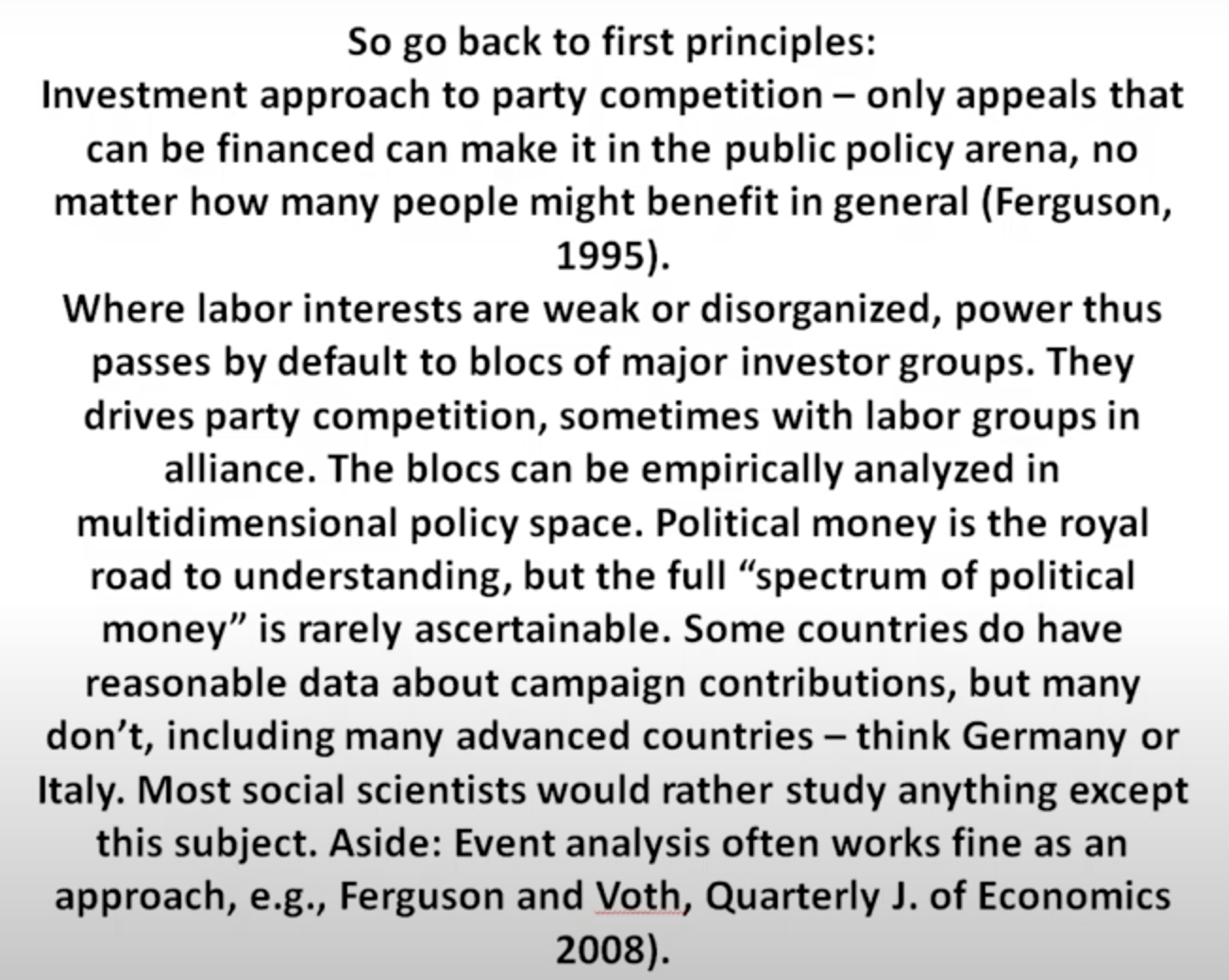 That reinforces neoliberalism. Despite the uses of war metaphors, where combatants would set up huge new bureaucracies to mobilize resources and people, governments are making interventions in the Covid-19 crisis though existing firms. But one war analogy that is more apt is that truth is always the first casualty. Ferguson comments on the terrible and inconsistent statistics about infection levels and deaths, which are due not just from the failure to run enough tests but as many suspected, also from the far from accidental failure to do the best job of counting, particularly of nursing home deaths. One reason Belgium has had such bad-looking results is that it’s been an exception, with officials making considerable efforts to keep accurate tallies.

The split on protecting workers versus businesses is largely but not entirely on class lines, with private equity playing an outsized role in pushing for an end to lockdowns. Ferguson notes that unions representing construction workers have been quietly pushing to end lockdowns, while white collar workers who are not in a much different position than meatpackers and retail store employees (in terms of working in close, high risk conditions) like health care professional and educators, have been acting in a somewhat radicalized manner (nurses and doctors speaking out; nurses engaging in walkouts; teachers threatening a strike in New York City, which led to school closures). This parallels the at least 200 strikes chronicled by Mike Elk at PayDay Report.

Notice this pushback it taking place despite safety needs operating against protests; Ferguson drily commented on the shrinking of the public space.

Ferguson does think there’s a sensible solution, although he recognizes it’s not likely to get done despite the relatively modest cost: 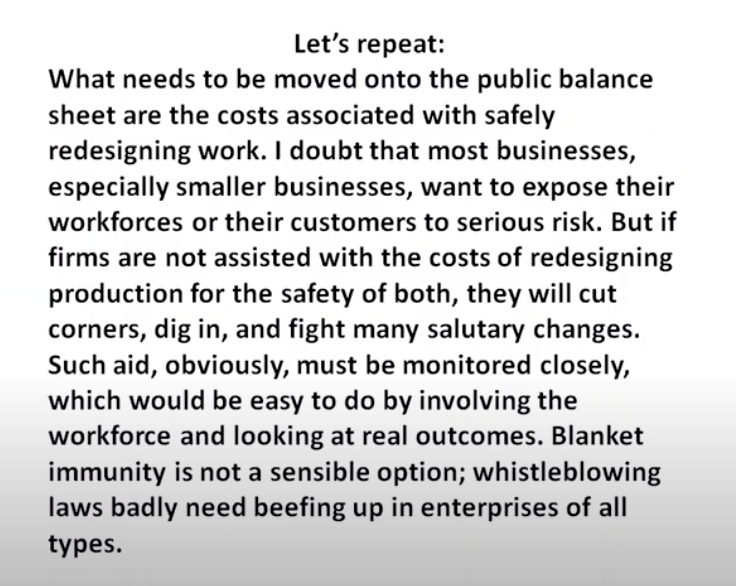 Ferguson also commented that the appearance that things were kinda-sorta stabilizing at a bad new normal (if you consider 25% unemployment, properly measured, a spike in childhood hunger, many unable to pay rents or mortgages and deferrals not long term solution) was deceptive. In the 2008 crisis, where the damage was more localized, even with large sectors impaired (residential real estate in certain countries; the banking system via housing-related derivative bets), there was lots of G-7 and G-20 communication and a good bit of cooperation. Trump’s America First policy has put the kibosh on that. Ferguson is particularly concerned about the parlous state of the EU/Eurozone. He sees a not-trivial risk of national politics taking the fore, above all in Germany, leading to actions that could produce another Credit Anstalt (with the most likely blowup taking place in the Italian banking sector). 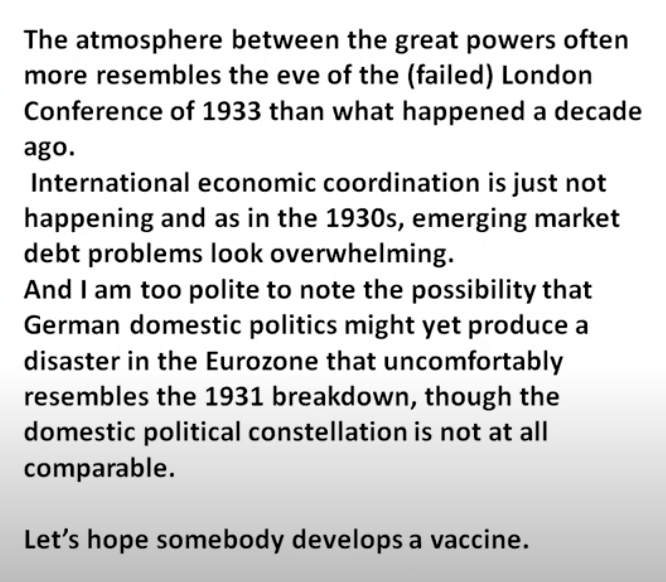 There’s a lot more meat in the talk and the Q&A, so I hope you can find the time to listen to it.

Sadly, the CEO of Merck confirmed what ought to have been obvious (as your humble blogger and Lambert have repeatedly pointed out in asides in posts and comments): a vaccine in even 18 months would be heroic. The comments from Merck are even more of a dampener by virtue of Merck being a big vaccine player. From the Financial Times today:

“It is not something I would put out there that I would want to hold Merck to,” the US pharmaceutical group’s chief told the Financial Times, adding that vaccines should be tested in “very large” clinical trials that take several months if not years to complete.

“You want to make sure that when you put a vaccine into millions if not billions of people, it is safe,” he said….

“Our experience suggests those are very aggressive compared to other timelines for getting a safe and effective vaccine,” Mr Frazier said when asked whether he thought the oft-repeated goal was realistic.

And Christine Lagarde confirmed that the Eurozone had taken a worse hit than in the financial crisis. Again from the pink paper:

The eurozone economy will shrink by 8 to 12 per cent this year, as the “sudden stop of activity” triggers a recession twice as deep as after the 2008 financial crisis, European Central Bank president Christine Lagarde has warned.

Ms Lagarde painted a gloomy picture of how the eurozone will emerge from the coronavirus pandemic as she told students on a live webinar that they faced “a massive economic crisis and one that was literally unheard of in peacetime for the damage it is causing”.

The ECB president, who will next week announce its latest monetary policy decision, said the “mild scenario” it outlined this month for a 5 per cent contraction in the eurozone economy this year was “in my humble view already outdated”.

She said the eurozone economy was “very likely” to end up “somewhere in between the medium and the severe scenario”, meaning the economy would contract by 8 per cent or 12 per cent. Adding that the bloc’s economy shrank 4 to 5 per cent after the financial crisis over a decade ago, she said “here we are talking about probably double that”.

As Ferguson said, “If you want a happy ending, watch a Disney movie.”