The controversy over CalPERS CIO Ben Meng’s decision to exit tail risk hedges just before a $1 billion payday is not going away as quickly as CalPERS would like. The Nassim Nicholas Taleb-affiliated fund manager, Universa, which managed the bigger and more lucrative hedge, has cleared its throat to debunk CalPERS’ excuses justifications for terminating the program despite it having the support of CalPERS’ consultant, Wilshire, and over the objections of staff. Now Universa itself has responded, via a letter to clients that we’ve embedded at the end of the post.

Julie Segal at Institutional Investor, who was first to write about the Universa missive, called it “scathing,” which is accurate as far as the substance is concerned, but not the tone, which is exceedingly polite.

For those of you who have not followed this fiasco closely, Bloomberg broke the story of CallPERS’ $1 billion tail risk hedge fail, which led CIO Meng to offer strained defenses. Taleb, who has little tolerance for intellectual dishonesty, roused himself to issue a high level rebuttal of Meng’s major claims, that tail-risk hedges were too pricey and not suited to long-term investors. Meng cited two papers that supposedly substantiated his views; we pointed out that one wasn’t even a study and that the second one, a 2012 article by AQR’s Antti Ilmanen,1 was off point in fundamental ways, such as relying on VIX, which is an at-the-money option, when Universa uses out-of-the-money options. A 2013 note by Taleb, which we are also embedding, eviscerates the Ilmanen piece. One tidbit that will hopefully entice you to read it in full: Taleb describes how Ilmanan cherry picked his data by excluding events like the 1987 crash.

CalPERS did respond to Taleb’s charges, but it amounted to broken record, as in simply repeating its assertions.

The Universa letter, written by former CalPERS officer Ron Lagnado, lays waste to Meng’s assertion that the Universa hedge was not suitable for CalPERS, and by implication, to pension funds generally.

Meng’s claim that tail risk hedges like Universa’s are too costly rests on his argument that he has other, cheaper “risk mitigation strategies”. Lagnado points out that the term is ill defined but then goes on to look at what sort of things Meng is referring to, which as we’ve seen is good old fashioned diversification by asset class. Lagnado looks not only at the results of a Universa-hedged portfolio compared to a widely used benchmark among pension funds, a 60/40 stock/bond portfolio, but he also performs the same analysis using CalPERS’ own returns. Both show that incorporating the Universa hedge delivered markedly better results for beneficiaries. From the letter (emphasis original): 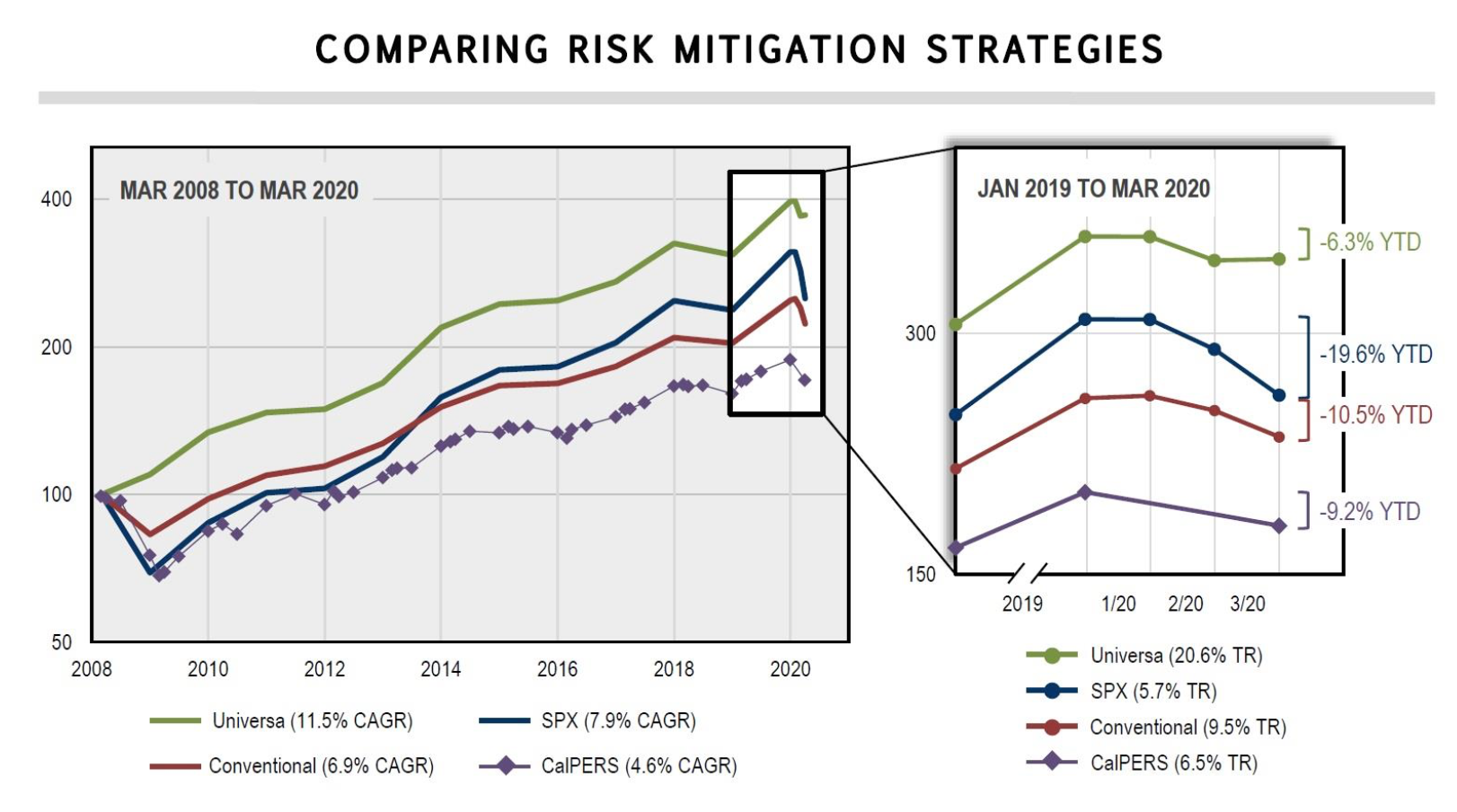 To be fair, we must point out that CalPERS alludes to further nuances of diversification in its portfolio, including an allocation to “factor-weighted equities.” Although the precise nature of that allocation is undisclosed, a passive investment in low volatility stocks might be involved. They also diversify across both public and private asset classes. (I am using only publicly available information in this memo.) While in this case study we are using the “conventional” risk mitigated portfolio as our CalPERS proxy, we do not want to be accused of a strawman argument. Therefore, we also have included on the chart for reference actual CalPERS portfolio return data points (using data that CalPERS provides on its website). Visibly, CalPERS has not been able to outperform the proxy that we are using historically.

…. the Universa tail hedge has demonstrably added tremendous value to its risk mitigated portfolio by lowering risk, observable in 2008 and 2020 YTD when the portfolio returns were +9.9% and -6.3%, respectively. Universa’s returns plainly show that this is most definitely not a comparison between two portfolios with similar risk, as Universa’s has been much lower.

Just as important, Universa’s risk mitigation also cost relatively little to employ. The benefit outweighed the cost; thus, the Universa risk mitigated portfolio CAGR bested the SPX CAGR by 3.6% over the total 12 years observed, which translates to a 47.9% gain in terminal wealth. It arguably added more value than could have been realized in any other risk mitigation strategy, at least that we know of (including long-duration treasury bonds).

Now admittedly, there are limits to how much hedging Universa can engage in without bidding up option prices. But that’s no excuse for not hedging as much of the CalPERS’ portfolio as feasible.

Ron Lagnado inserting himself into this controversy puts another issue into the spotlight: how Meng has been driving the most competent senior investment professionals out of CalPERS. Oddly, the press has been silent on this issue even though CalPERS beneficiaries are concerned. From public comments at the last board meeting by Robert Girling and Sherry Keith, speaking on behalf of CSU-ERFSA, one of the influential retiree groups:

CalPERS is afflicted with the worst crisis since the Great Depression and, based on a series of articles in the Wall Street Journal and other financial publications, it appears that the Chief Investment Officer is not up to his job. In the last two weeks, two of CalPERS best and brightest employees have quit to go back to the private sector. Ron Lagnado who has essentially — who essentially followed Meng’s career path as the fund’s Fixed Income quant and then became the deputy head of Asset Allocation…” — and in parentheses — “…(and is a CalPERS…” — or excuse me — “…. a Caltech PhD)…” — end parentheses — “…has just left to work for an options specialty firm.

Paul Mouchakkaa who ran Real Assets and did much to turn the real estate portfolio around and divest bad assets is going back to his native Canada to be a senior partner at one of the biggest Canadian real estate firms.

It is an open secret that Meng forced Lagnado and Mouchakkaa out.

Meng appears to be out to destroy what CalPERS had in the way of an investment brain trust. The previous Chief Investment Officer, Ted Eliopoulos, had established a team called Portfolio Allocation Subcommittee (PAS). Eliopoulos envisaged it as a tactical asset allocation group and staffed it with senior managers who had hands on active portfolio management experience with proven alpha generation, meaningful careers in finance in the private sector prior to CalPERS, a graduate degree, plus at least one of a macro orientation, experience working in different asset classes, or strong quantitative skills. The aforementioned Ron Lagnado and the recently-ousted head of real estate, Paul Mouchakka, were both members of PAS.

Meng’s efforts to cite the debunked-by-Taleb Ilmanen paper as a justification for blowing up a $1 billon payday are seen internally as further evidence of Meng’s dishonesty. The aforementioned PAS, at a meeting that Meng did not attend, did discuss the Ilmanen paper, as well an op-ed by Robert Litterman, which Meng had also invoked. But they were not considering ending the tail hedges. Instead, the focus was examining alternative approaches to taking the quantum of equity risk CalPERS required to meet its return targets while either hedging or allowing the fund to be more broadly diversified than the direction it was moving in. Meng has not taken up either approach. As one observer put it. “The fund is effectively betting it all on black with no hedges and very little diversification.”

It is becoming more and more apparent that Meng is dishonest. He lied to the board about exiting the tail hedges. Virtually none of the beneficiaries commenting at the last board meeting bought Meng’s lame claim that he hadn’t give a direct and false answer to a direct question. He’s continued to prevaricate with his attempts to rationalize exiting the hedges. And far more important, he’s tried to pretend to the board and the general public that he’s been engaged in “risk mitigation,” as in lowering risks to the fund, when he’s been taking more concentrated and hence riskier bets.

1 It is unfortunate that Julie Segal took the word of a CalPERS spokesperson that the Ilmanen article (which Segal calls “AQR’s research” when it was not an AQR document) as recent when it was published in 2012. Hopefully she will examine CalPERS’ claims in the future. A different Institutional Investor reporter ran a too-obviously planted piece on MSCI research that claimed to debunk tail risk strategies using options that were 10% out of the money. 10% is well within normal stock and index volatility ranges. It’s quite a stretch to call them “deep out of the money” in this context. This analysis is so disingenuous as to make it look like MSCI had to cook its analysis to prove its headline claims.