Pulitzer Prize winning reporter Mike Hiltzik has criticized the CalPERS board for “acting childishly” and wasting energy on “intramural bickering” and imposing sanctions on its pro-transparency, pro-accountability board members, first JJ Jelincic, more recently Margaret Brown rather than engage in oversight of the giant fund.

But rather than focus on executing its fiduciary duty, the board has doubled down on acting as the staff’s enforcer and attacking dissidents who call out incompetence and abuses. The campaign against Brown has risen beyond petty harassment, like locking her out of her office, to measures that look designed to undermine her ability to perform as a board member and negatively effect her campaign for re-election.

Brown has apparently had it with the CalPERS’ and its captured board’s range war and has filed suit, which we have embedded below. The form is a Writ of Mandate, which is a petition to the court to compel a government body either to undertake an action or stop taking certain actions.

The Brown Writ, is parsimonious and describes how CalPERS has instituted a “discipline” process for board members that makes kangaroo courts looks good; it’s the sort of thing you see in gangs and fascist regimes. It gives the board president, currently Henry Jones, the power to make charges and levy punishments, with no fact-finding, opportunity for rebuttal, independent adjudication, or appeal. In keeping with the totalitarian nature of the process, there is also no notion of the sanctions being proportional to the alleged offense; recall again that Hiltzik criticized CalPERS for even bothering to take action against board members for trivial lapses.

And in this case, the “lapse” was created by CalPERS.

One of the ways that CalPERS’ staff seeks to exercise control over the board, when the board is supposed to be in charge, is through restricting their communications.1 Brown’s alleged offense was using a Twitter handle @calpersmargaret, which CalPERS claimed was impersonating CalPERS. This strains credulity, since the name is clearly that of an individual, not an institution. CalPERS’ vendetta against Brown is even more obvious given that CalPERS hasn’t acted against former and other current board members who use “CalPERS” as part of their Twitter name: 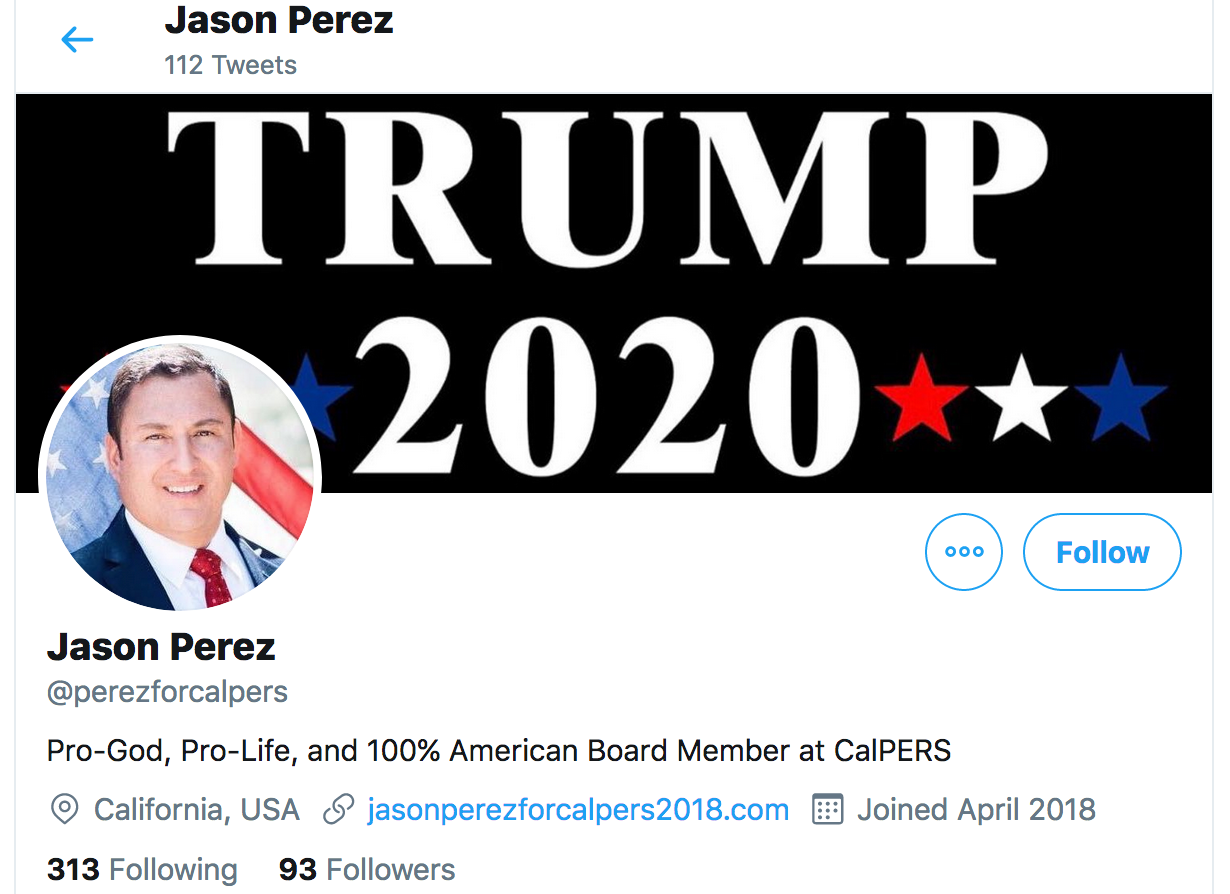 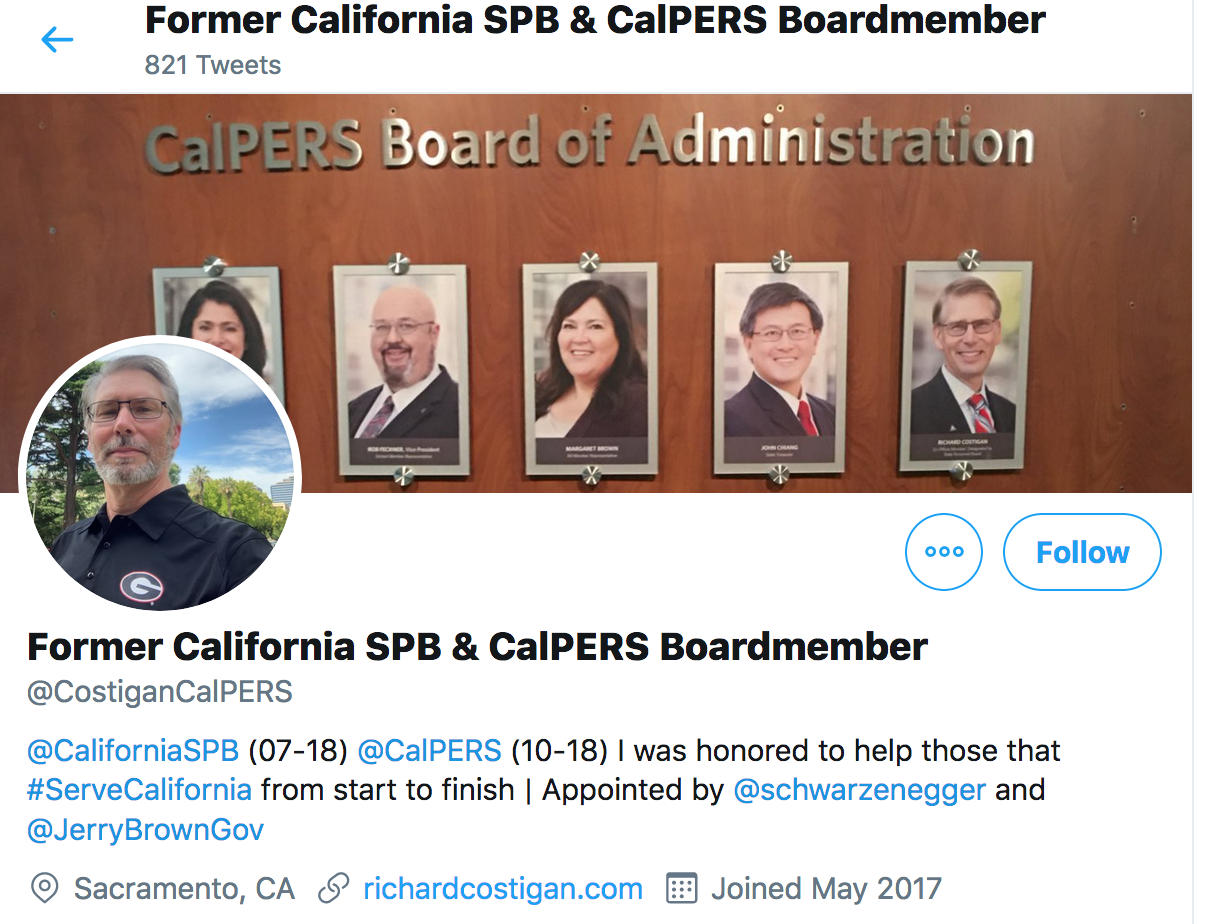 Other active Twitter accounts with CalPERS in them include @calperswatchdog, @Calpers_Andy, @CALPERSRND, @Calpers10 and @Calpers15.

Brown had had her account up for over eighteen months and had seldom tweeted (Facebook is her preferred social media platform). What apparently triggered official ire was Brown encouraging CalPERS beneficiaries to vote in the last board election! This was her final tweet:

Brown was supporting former board member JJ Jelincic, who was seeking to return. Given that other board members had endorsed the incumbent, the very Henry Jones who upon his being chosen as board president, then sanctioned Brown, his action looks like revenge, particularly given that the basis for the move was fabricated.

CalPERS did send Brown a cease and desist letter regarding her allegedly impermissible Twitter handle, But less than 24 hours after sending Brown that e-mail, CalPERS had gotten Twitter to suspend her account. That suggests that CalPERS had never intended to give her the opportunity to “cease and desist”; its demand to Twitter had to be close to simultaneous with their demand letter and may well have preceded it.

That also means the claim that Brown didn’t comply is bogus because she was denied the opportunity to comply. So the action against her is on fabricated grounds.2

CalPERS’ assertions about Brown’s actions, presented in its letter dated September 16, 2019 which we have embedded below, don’t hold up to scrutiny. As one CalPERS insider wrote:

CalPERS makes arguments beyond absurd. Their first argument is that Brown is violating the law that makes it illegal to use public resources for political campaigns. What they are saying is that the word “CalPERS” is a public resource. However, among the many problems with this are:

CalPERS claims that the Business and Professions Code 17533.6 “prohibits any person from using a state agency’s name, such as CalPERS, when the use could be construed as implying the state agency’s connection, approval or endorsement unless the person has the express authorization of the state agency.” However, this is flat out not what the law says. Instead, the law prohibits such use explicitly if the materials imply a government body’s “connection, approval, or endorsement of any product or service [emphasis added].” Brown is not selling anything, so this entire provision does not apply to her. Moreover, this provision of law contains an explicit safe harbor, where even if Brown were engaged in commercial promotion, it is only prohibited “unless the nongovernmental entity has an expressed connection with [emphasis added], or the approval or endorsement of, a federal, state, or local government, military veteran entity, or military or veteran service organization.” Since Brown clearly stated her connection to CalPERS in her Twitter account, this prohibition does not apply for this reason as well.

It is par for the course that the letter from non-lawyer operation chief Kim Malm also misrepresents the reach of CalPERS trademark.3 It is cringe-making to see Malm claim “….the use of the word ‘CalPERS’ for unauthorized purposes violates CalPERS federal trademark rights.” Really? Then pray tell how can critics and analysts talk freely about CalPERS? The CalPERS Ministry of Truth has not authorized anything other than happy talk.

In keeping with the discussion of the Business and Professions Code above, the purpose of a trademark is to identify and brand particular goods and services and to protect the company using the trademark from copycats.

There’s a long history of gripe sites that incorporate the name of the targeted company, such at www.goldman666.com, being recognized as non-infringing because they are clearly not competing with the business they are trashing. Indeed, as ars technica explained:

When we spoke with EFF staff attorney Corynne McSherry in 2007 about Lowes-sucks.com, she noted that “gripe sites like this are protected—in fact, [the courts] want people to speak freely and share information about their experiences with various companies.” She said that trademark holders sometimes lose sight of the point of trademark law, which is to protect consumers and provide them with good information about a company’s product. Gripe sites provide information on someone’s consumer experience, she said, which is not only allowed under trademark law, but protected by the First Amendment.

Jones is denying Brown reimbursement for CalPERS-related travel, such as to beneficiary meetings. This sanction explicitly negates her ability to execute important duties as a board member as stipulated by CalPERS

CalPERS has set forth board member obligations that are eligible for “release time,” as in CalPERS will reimburse any employer of a CalPERS board member for time spent on these tasks. From Item 6c at the Finance and Administration Committee board meeting on November 19, 2019, Board Member Employer Reimbursement:

The baseline hours represent the “routine” activities of Board Members, including offsites, workshops, and interviews; preparing for Board and Committee meetings; meetings with staff, consultants, beneficiaries, stakeholders, or industry experts; responding to individual constituency e-mail, telephone calls, or correspondence; and keeping current on pension fund and health industry issues.

See this worksheet from an April 2020 board meeting document. Virtually all of the items involve travel:

The travel ban clearly undermines Brown’s ability to perform her duty as one of only two board members elected to represent beneficiaries as a whole. Not only can she not meet with them in person to hear their concerns, but she is also being put at a disadvantage compared to other board members who can freely meet with beneficiaries.4

In addition, Brown is also being blocked from attending industry conferences. Brown has made a point of going only to forums in the US where she can obtain fiduciary duty training, Curiously, other board members see no incongruity in going on junkets to Europe, Australia, or South Africa despite the bad optics of such lavish travel when CalPERS is seriously underfunded.5

So it appears the CalPERS board and staff want to keep board members barefoot and pregnant uninformed and dependent on staff. Jones evidently does not want Brown to have information on which would help her evaluate the staff.

Not that it even takes all that much know-how to be better informed than the CalPERS board. Today’s Wall Street Journal had letters to the editor on the Journal article last week on CalPERS’ reckless bet to pile on risk via more private equity, private debt, and fund-level leverage when asset valuations are at record levels despite poor prospects for the economy for the next eighteen months and quite possibly longer. They were all critical. One particularly damning missive from Mark Holmlund of Glenbrook, Nevada:

All of this was accomplished at a fraction of Calpers’s cost and staffing.

It has to stick in their craw that despite their efforts to gag her, Brown was the focus of a prominent article in yesterday’s Financial Times: Calpers board member objects to $80bn leverage gamble. And as we’ve indicated, it’s appalling, yet at this point no surprise, that the rest of the board is so financially illiterate that they don’t share Brown’s alarm about the risks or having staff lie to them. From the article:

She added that when the board initially gave approval for adopting a 20 per cent leverage strategy, there was no discussion that most of it would be for private equity and private debt.

In other words, Jones’ and the staff’s juvenile campaign against Brown would merely be yet another pathetic proof of how far CalPERS has fallen were the stakes not so high.

I hope readers will consider donating to Brown’s litigation fund. Even a small contribution will help. And please circulate this post to California readers since bad CalPERS bets will come out of taxpayers’ hides. Brown is the only one on the board looking out for their interest, and it would be nice if they did more to protect her back.

1 For instance, board members don’t have access to CalPERS letterhead; they are treated like children and have to submit the text of any missive to staff, which then prepares and sends the letter. Needless to say, this amounts to a review by staff of board communications and gives them the opportunity to object and delay. By contrast, as a newly-hired associate at Goldman, I was issued my own stationery with the firm’s logo on it.

2 Moreover, Brown was denied the opportunity to keep her old account up and redirect it to a new account, which is what CalPERS eventually asked of former board member Richard Costigan. Note that it taken no action against current board member Jason Perez’s offending account. Apparently current board members who side with staff get special breaks.

3 Further reflecting CalPERS’ state of legal confusion, in its letter to the board about Brown’s suit, CalPERS tried asserting that Brown violated CalPERS’ copyright when single words cannot be copyrighted.

Note the letter tried to depict Brown as a recidivist. Brown did attempt to use a modified version of CalPERS logo in her campaign. CalPERS objected and Brown promptly stopped. And it’s separately irrelevant to bring in disputed matters from before Brown joined the CalPERS board.

4 CalPERS staff is particularly eager to dislodge Brown, so it is conceivable that an elected incumbent in another seat for which Brown would be ineligible (such as the public agency member seat) would be persuaded to challenge Brown when Brown’s term is up.

5 Henry Jones has been to South Africa at least twice on CalPERS’ dime.