Yves here. Tom mentions in passing the role of Pinkertons as goons for hire to crush early labor activists. Some employers like Ford went as far as forming private armies for that purpose. Establishing police forces were a way to socialize this cost. 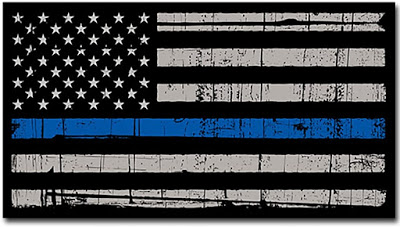 One version of the “thin blue line” flag, a symbol used in a variety of ways by American police departments, their most fervent supporters, and other right-wing fellow travelers. The thin blue line represents the wall of protection that separates the orderly “us” from the disorderly, uncivilized “them”.

[In the 1800s] the police increasingly presented themselves as a thin blue line protecting civilization, by which they meant bourgeois civilization, from the disorder of the working class.
—Sam Mitrani here

It’s a commonplace to say the primary job of police is to “protect and serve,” but that’s not their goal in the way it’s commonly understood — not in the deed, the practice of what they daily do, and not true in the original intention, in why police departments were created in the first place. “Protect and serve” as we understand it is just the cover story.

To understand the true purpose of police, we have to ask, “What’s being protected?” and “Who’s being served?”

Urban police forces in America were created for one purpose — to “maintain order” after a waves of immigrants swept into northern U.S. cities, both from abroad and later from the South, immigrants who threatened to disturb that “order.” The threat wasn’t primarily from crime as we understand it, from violence inflicted by the working poor on the poor or middle class. The threat came from unions, from strikes, and from the suffering, the misery and the anger caused by the rise of rapacious capitalism.

What’s being protected? The social order that feeds the wealthy at the expense of the working poor. Who’s being served? Owners, their property, and the sources of their wealth, the orderly and uninterrupted running of their factories. The goal of police departments, as originally constituted, was to keep the workers in line, in their jobs, and off the streets.

The following comes from an essay published at the blog of the Labor and Working-Class History Association, an academic group for teachers of labor studies, by Sam Mitrani, Associate Professor of History at the College of DuPage and author of The Rise of the Chicago Police Department: Class and Conflict, 1850-1894.

Keep in mind that there were no police departments anywhere in Europe or the U.S. prior to the 19th century — in fact, “anywhere in the world” according to Mitrani. In the U.S., the North had constables, many part-time, and elected sheriffs, while the South had slave patrols. But nascent capitalism soon created a large working class, and a mass of European immigrants, “yearning to be free,” ended up working in capitalism’s northern factories and living in its cities.

“[A]s Northern cities grew and filled with mostly immigrant wage workers who were physically and socially separated from the ruling class, the wealthy elite who ran the various municipal governments hired hundreds and then thousands of armed men to impose order on the new working class neighborhoods.” [emphasis added]

America of the early and mid 1800s was still a world without organized police departments. What the Pinkertons were to strikes, these “thousands of armed men” were to the unruly working poor in those cities.

Imagine this situation from two angles. First, from the standpoint of the workers, picture the oppression these armed men must have represented, lawless themselves yet tasked with imposing “order” and violence on the poor and miserable, who were frequently and understandably both angry and drunk. (Pre-Depression drunkenness, under this interpretation, is not just a social phenomenon, but a political one as well.)

Second, consider this situation from the standpoint of the wealthy who hired these men. Given the rapid growth of capitalism during this period, “maintaining order” was a costly undertaking, and likely to become costlier. Pinkertons, for example, were hired at private expense, as were the “thousands of armed men” Mitrani mentions above.

The solution was to offload this burden onto municipal budgets. Thus, between 1840 and 1880, every major northern city in America had created a substantial police force, tasked with a single job, the one originally performed by the armed men paid by the business elites — to keep the workers in line, to “maintain order” as factory owners and the moneyed class understood it.

“Class conflict roiled late nineteenth century American cities like Chicago, which experienced major strikes and riots in 1867, 1877, 1886, and 1894. In each of these upheavals, the police attacked strikers with extreme violence, even if in 1877 and 1894 the U.S. Army played a bigger role in ultimately repressing the working class. In the aftermath of these movements, the police increasingly presented themselves as a thin blue line protecting civilization, by which they meant bourgeois civilization, from the disorder of the working class. This ideology of order that developed in the late nineteenth century echoes down to today – except that today, poor black and Latino people are the main threat, rather than immigrant workers.”

That “thin blue line protecting civilization” is the same blue line we’re witnessing today. Yes, big-city police are culturally racist as a group; but they’re not just racist. They dislike all the “unwashed.” A recent study that reviewed “all the data available on police shootings for the year 2017, and analyze[d] it based on geography, income, and poverty levels, as well as race” revealed the following remarkable pattern:

“Police violence is focused overwhelmingly on men lowest on the socio-economic ladder: in rural areas outside the South, predominately white men; in the Southwest, disproportionately Hispanic men; in mid-size and major cities, disproportionately black men. Significantly, in the rural South, where the population is racially mixed, white men and black men are killed by police at nearly identical rates.”

As they have always been, the police departments in the U.S. are a violent force for maintaining an order that separates and protects society’s predator class from its victims — a racist order to be sure, but a class-based order as well.

We’ve seen the violence of the police as visited on society’s urban poor (and anyone else, poor or not, who happens to be the same race and color as the poor too often are), and we’ve witnessed the violent reactions of police to mass protests challenging the racism of that violence.

But we’ve also seen the violence of police during the mainly white-led Occupy movement (one instance here; note that while the officer involved was fired, he was also compensated $38,000 for “suffering he experienced after the incident”).

So what could we expect from police if there were, say, a national, angry, multiracial rent strike with demonstrations? Or a student debt strike? None of these possibilities are off the table, given the economic damage — most of it still unrealized — caused by the current Covid crisis.

Will police “protect and serve” the protesters, victims of the latest massive transfer of wealth to the already massively wealthy? Or will they, with violence, “maintain order” by maintaining elite control of the current predatory system?

If Mitrani is right, the latter is almost certain.