Those long enough in tooth to have been working in the later 1990s may remember the hyping of going freelance. The growth of the gig economy precariat has tarnished that allure, but there was a large contingent of high-end, high-skill workers who either went from project to project or had their own clientele and now are in diminished to desperate straits.

A new Wall Street Journal story focuses on Los Angeles as the city hardest hit by this unwind, due particularly to the prevalence of short-term, well-paid work in creative professions related to film, commercial, and TV production, as well as less top-of-mind fields such as hospitality and international trade. Another group laid low are personal service professionals, such as fitness trainers, voice and music coaches, and tutors.

An irony is that tech, which is riding high now, went through a bust like this in the dot-bomb era. Even consulting firms like McKinsey, which had gotten so addled on the Internet revolution that they bulked up and even took equity in lieu of fees (leading to hundreds of millions in writedowns) wound up shrinking its staffing in North America by nearly 50% over a two-year period. And while big firm consulting and tech recovered from this downdraft, it’s an open question as to how long it will take to get effective coronavirus vaccines and treatments, and in the meantime, how much of this formerly vibrant freelance activity can come back in this strained new normal. 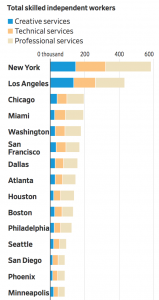 Even though the proportion of “skilled independent” workers is a smidge higher in San Francisco than in Los Angeles, both around 6%, San Francisco’s freelance elite skews towards tech. Miami, Austin, and New York are next, all coming in above 5%. California is taking advantage of Federal emergency program provisions that allow states to provide unemployment benefits to gig/freelance workers, as much as $450 weekly through year end. That means they also receive the Federal $600 per week supplement through the end of this month.

Los Angeles has gotten a double whammy by having the second highest number of Covid-19 cases in the US, despite  its famed sprawl, and seeing a recent spike in new infections.

And as the Wall Street Journal story recounts, Los Angeles’ recent limited reopening hasn’t led to much if any rebound in business for these freelance pros. That confirms a pattern we’ve described repeatedly: consumers restricting their activities is much more driven by their perception of risk, which is driven by factors like local Covid-19 death counts,  than government intervention. From the article:

Creative freelancers—with little job protection and incomes reliant on people leaving their homes—have been some of the hardest hit in the coronavirus-driven recession, according to economists. Performers, production crews, ride-share drivers and personal trainers were among the first to lose work and will likely be among the last to regain lost ground in the coming months, experts say…

Fitness coach Sophia Dalton, 37, said none of her clients are willing to train in person at the gym she uses in Santa Monica, which has reopened, due to fear of catching Covid-19.

She is down to 14 clients training by online video from a peak of 54. Several who quit are writers and performers who lost their own jobs and asked for refunds….

Stephanie Hoffman, 32 years old, a voice and piano teacher, lost most of her students when the pandemic forced people to stay home. One third have returned, but she fears they won’t stick, due to frustrations with virtual training. She had to cancel a live recital for her students, further damping their motivation.

Another example: know a very high-end trainer who rehabs professional sports teams, Olympic contenders, and Division One athletes. He used to both fly all over the US and sometimes abroad and have his clients fly in for treatment and programs, and he had several good people working for him. He’s now gone to live with on his family’s farm (I understand the caliber of the local schools is a factor in this interim move). It’s hard to fathom how he is getting by with pro sports in hibernation.

The Wall Street Journal’s readers sadly seemed not to get the point (despite the article being clearly written) that this piece was about skilled contractors and not Uber-type gig workers who are the focus of pending legislation (AB5) to have them correctly treated as employees. A few piped up to reinforce what the article was really about:

I live in LA, and the article is really about people who work in entertainment/media — every tv show, commercial, music video and movie is the result of anywhere from a few dozen to hundreds of people who work for the run of the project, then move on to another project. It’s everything from the building trades – carpentry, electrical, rigging/framing – to business services — legal, accounting, HR – to tech heavy work – video/sound editing — and finally, a lot of musicians — people who write and play the music you hear. All of these people are employees of the production, not AB5 type gig workers.

It’s a lifestyle/career choice and not for everyone. People hustle, build relationships and are always on the lookout for the next gig. But the work has been steady for decades, and then very suddenly the whole sector shut down hard.

New York has an analogous problem with live entertainment: theater, opera, dance, cabaret acts. And while there are always more people who aspire to sing and act than there are professional opportunities, it’s not clear what happens when the skilled professionals behind the scenes, like sound and lighting designers, stage managers, carpenters and painters, are thinned out.

It’s distressing just to see individuals who had jobs adequate to support them they could at least tolerate now un or underemployed and fearful about what happens next. It’s even more disturbing to see work disappear in a way that looks likely to result in the loss of some, perhaps many, not easily reconstituted capabilities. Perhaps some of these now idled creative freelancers will come back eventually more as journeyman-trainers of a new generation. But we are a long way from knowing how this movie ends.