Yves here. Those of you who remember the financial crisis and its aftermath no doubt recall how persistent real estate cheerleading was. So the notion that the flogging of Case-Shiller, very much a lagging real estate indicator, was merely the result of ignorance and laziness is charitable.

OK, dear reader, I feel like I’m fighting a one-man battle against media misinformation or something. I didn’t want to descend into housing-data purgatory with you, and you didn’t want to either, but now we’re on the way after the horrifically brain-dead misreporting in the media about the Case Shiller Home Price Index this morning by lazy-ass reporters, or increasingly by spaghetti-code algos, who didn’t bother to read the Case-Shiller methodology – or better yet, my past articles about the Case-Shiller Index.

These brain-dead reporters – or the spaghetti-algos that wrote the reports – went like this: National home prices rose 4.8% year-over-year in April, during the peak of the lockdowns and despite the pandemic, showing how vibrant the housing market is.

But that is bull malarkey because the S&P CoreLogic Case-Shiller Home Price Index doesn’t work that way. It lags massively behind. With the Case-Shiller Index – my favorite home price index because of the way it is structured – you have to be patient. That’s its big drawback.

The Case-Shiller Index operates on a “three-month rolling average” basis. And the price data is collected from public records. So the release today, titled “April,” was the three-month moving average for deals whose data became available in the county deed recorders in February, March, and April.

There is also a time-lag between when a deal closes and when the data becomes available in the county deed recorders.

This is not a secret. S&P publishes the methodology. And reporters should have studied it before reporting bull-malarkey and misinforming their readers, many of whom paid a subscription to be misinformed.

The Case-Shiller Index uses the “repeat sales method” where it compares the sales price of a house that sold in the current month to the price of the samehouse when it sold previously. To make it into the index, a house has to have been sold at least twice.

This sales-pair method makes the index immune to changes in the mix of houses that sold, which is an advantage over the common median-price indices. The index essentially tracks price changes for each house in the index separately over time and then builds an index out of the sales-pair data. The index provider also applies some algorithms to iron out certain issues, such as improvements made to the house over time.

First signs of the pandemic

It is in the number of “sales pairs” in April where we can see the first impact of the pandemic. I will use the sales pairs of houses in the index for the five-county San Francisco Bay Area (counties of San Francisco, San Mateo, Alameda, Contra Costa, and Marin) because it is this area that went into lockdown before any other area in the US, on March 17.

The index used 2,970 sales pairs for April in the Bay Area. Meaning, data points of 2,970 houses whose sales were made available in the public records in April, and which had been sold previously, entered into the index. That count was down 24% from April last year. This is the first sign of the pandemic’s impact.

In March, the sales pair count was down only 2% from a year ago, well within the normal year-over-year fluctuations of the sales pair count. In other words, the lockdown that started on March 17 had not yet, or had only barely, impacted the public records data.

The chart below shows those sales-pair counts by month for the five-county San Francisco Bay Area. This is an indication of home sales volume, which is subject to strong seasonality. The low month in terms of sales appearing in public records is always in February. The high months are June and/or July.

This year, February was also the low point, and there was a small uptick in March, but April, when home sales volume normally begins to surge, was stunted, which caused it to be down 24% compared to April last year (green arrow): 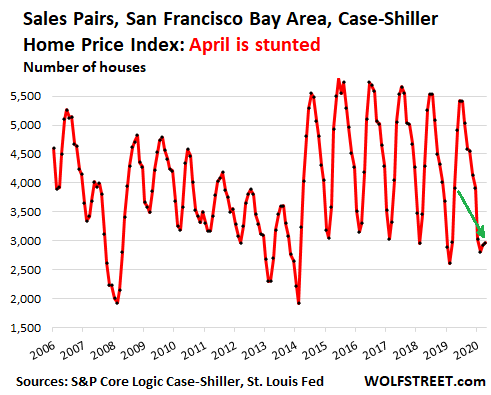 In other words, price changes in April were further watered down in the rolling three-month average by being seasonally under-represented in terms of volume.

So the Case-Shiller Index for “April” in the Bay Area, the first of the 20 city indices to reflect the pandemic, contains, roughly speaking, 80% of pricing data from sales before the pandemic, and 20% of price changes from sales during the pandemic.

The National Home Price Index, which was cited in the headlines this morning, was even less impacted by lockdowns and the pandemic than the San Francisco Bay Area index because all other markets in the 20-city index locked down later than the Bay Area.

So, what the national index told us today is nearly all based on home prices before the impact of the pandemic. It will be another three months – the index to be released on September 29 – before every month in the National Case Shiller Index’s rolling three-month average fully reflects home prices of sales that closed since the beginning of the lockdowns.  Each month will get us a step closer. And even then, it will take a while because house price data is sticky and moves slowly. So be patient.

Enjoy reading WOLF STREET and want to support it? Using ad blockers – I totally get why – but want to support the site? You can donate. I appreciate it immensely. Click on the beer and iced-tea mug to find out how: