The rich are so well insulated from the impact of the pandemic that they’ve managed not to see evidence of rising hunger in the US, like big lines at food kitchens. A new bit of evidence comes in the Wall Street Journal today, via a detailed account about how consumers are cutting back on grocery spending. With food such a core budget item, it seems likely that lower food spending translates into deeper cuts on other fronts.

The Journal attributes the falloff to the end of the $600 a week unemployment supplement in July. Grocers are sufficiently concerned that they are starting to offer more discounts.

The level of distress is almost certainly worse than the Journal reports, since the paper is relying on dollar spending. As most of you know, there’s been a lot of inflation in food prices even though the press has not taken much notice.

On top of that, I suspect, based on reader reports that some households are staring to up their stockpiles in anticipation of worsening levels of Covid in the winter, which could lead both to production problems and mini-buying panics. So if some are buying more to increase personal inventories, that means the adjusted average (in terms of purchases for current consumption) is even lower.

The Stop & Shop quote below is similar to other statements by industry players. Separately, I’m not sure how useful year to year comparisons are, since Americans have cut back on their restaurant eating and are consuming more at home, at least in part due to reduced restaurant and take out lunches for commuters. From the Journal: 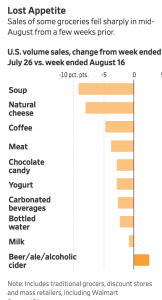 Gordon Reid, president of Stop & Shop, a grocery chain owned by Koninklijke Ahold Delhaize NV, said he expects price to be a challenge for consumers in the last quarter of the year and into next year. While Mr. Reid hasn’t seen a direct connection to reduced unemployment checks, he said customers have become more price-conscious….

While sales of groceries, such as frozen dinners, cereal, soup and coffee, are still higher than they were a year ago, sales growth has slowed compared with July and prior months in the pandemic. 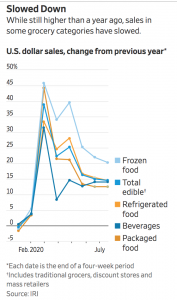 Grocery prices were broadly consistent with prior weeks, and restaurant dining held steady during that time, the IRI analysis showed, indicating that neither was a significant factor in the slowed grocery spending—further evidence that the halted unemployment stimulus was a driving factor. However, restaurant-data provider Black Box Intelligence said same-restaurant sales have declined less so far in August than in July, when including takeout, delivery and dine-in.

Some states with higher unemployment, such as Illinois, Nevada and New York, recorded a greater deceleration in grocery spending, according to IRI.

Fewer trips to grocery stores, along with smaller receipts per visit, are typical patterns during a recession….

The financial stress could lead to more people shopping at dollar stores, as middle-income consumers who wouldn’t normally shop there might start to, according to Morgan Stanley retail analyst Simeon Gutman….

The article also included anecdotes from shoppers at varying levels of distress, from one who has cut some grocery stores from her list and had become much more price-fixated in what she buys, to another who has lost her job:

Mary Proffitt, 63, who was laid off by her restaurant employer in Kentucky at the end of March, hasn’t received stimulus or unemployment checks since May because of a backlog in her state. She said she cut weekly spending on groceries by half to $100, and relies on canned and frozen vegetables. “I’ve never been this destitute before,” she said.

Krystal Ball also discussed how the divergence in conditions for the well off and everyone else is turning into a yawning chasm. She, like readers on the site, noted in particular the red-hot real estate market. That is not just in stark contrast with sharply rising mortgage delinquencies, already at 2012 levels, but as she points out, also with plunging consumer confidence and a high level of permanent job losses. And as Tom Ferguson pointed out in his TheAnalysis.news interview that we just posted, small businesses failures are set to continue, with an accompanying loss of jobs and owner wealth.

Krystal argues that the fundamentals are so poor that a 1929-level October crash is entirely possible, and that isn’t a hair-on-fire crazy idea, with so many non-permabear top experts warning that valuations are at nosebleed levels. But you don’t have to factor in a stock market crash to accept the proposition that the economy faces a world of hurt. A consumption-driven economy with a big drop in consumption is going to be a lot smaller.