Yves here. Because ordinary people have accepted so much abuse at the hands of the top 10% and their manager-stooges, the powers that be assume that the public at large will continue to consume their shit sandwiches. But the lack of meaningful resistance in the wake of the financial crisis doesn’t translate into continued passivity now.

First, the rich took proportionately greater hits initially, although they then quickly wound up better situated due to the recovery in incomes and asset values disproportionately favoring the better off. Second, the big way the middle and lower middle classes took hits was via the loss of home equity, through 9 million foreclosures than in most cases could have been forestalled through modifications that would also have left investors better off than foreclosure. It was the mortgage servicers, who were paid to foreclose but not to modify loans, who were in charge of this destructive dynamic. The Obama Administration wasn’t willing to break a sweat to force them to behave, despite having ginormous legal leverage thanks to widespread failure to transfer mortgages properly to securitization trusts, a problem that for ~80% of the mortgage securitizations, could not be remedied absent having a time machine.

One reason this large-scale wealth stripping didn’t lead to a revolt was the afflicted homeowners were isolated. Most had fallen into foreclosure due to suffering a crisis-induced income hit. Under our value system of “borrowers are guilty if they can’t pay” even when other borrowers who couldn’t pay, namely banks, got ginormous bailouts with no executive or board member suffering, the borrowers were stigmatized. Many also were ashamed and didn’t know or find people in similar situations until it was too late to do much about their situation.

Another factor that kept a possible resistance in check was that food stamp use under the Obama Administration. Confirming that the “recovery” left a lot of citizens behind, the number receiving food stamps rose though 2013 and remained elevated for the rest of his term. Oh, and that data obscures the fact that the Obama Administration cut food stamp benefits by $8.7 billion in 2014, with 850,000 suffering reductions of an average of $90 a month.

So keeping food in citizen’s bellies looks to have gone a considerable way towards keeping people struggling to survive enough afloat to keep them from taking desperate measures. The initial astute Republican move of generous unemployment payments and some additional income, along with a freeze on evictions, helped preserve most people’s living circumstances during the Covid shock. That is now coming unraveled with no second stimulus in the offing, any further eviction halts being up to states and cities, and the Trump Administration having shred the fallback safety net, food stamps. See our related post today on how consumers are already spending less on groceries, an indicator of widespread stress.

And now there’s a focus for a long-simmering, well-warranted sense among large swathes of the public of having been exploited, with far too many people in charge either profiting directly or refusing to intervene because it might impair their social and financial status. Police abuse, and the unwillingness of the well-off to impose curbs or reconstitute particularly rancid police forces is serving as a focus for anxiety and anger on many fronts. And it’s not as if white people are naive about their risk exposure, given more and more video evidence of police roughing up journalists and clearly harmless old people deemed to be too close to protests.

You know in your hearts that only a #SixtiesStyleMovement will address this situation.

You know in your hearts that electeds are impotent or bought, and elections alone will never be enough.

You know in your hearts that the day of Real Resistance is coming.

A general strike counts as real resistance.
—Yours truly

The next horrific murders are upon us. In the bland reporting of the New York Times:

Arrest in Overnight Shooting During Unrest in Kenosha, Wis.

An Illinois resident was arrested in violence that occurred during a confrontation between demonstrators and a group of men armed with guns as protests continued over the police shooting of Jacob Blake.

KENOSHA, Wis. — An Illinois resident has been arrested in connection to a shooting that left two people dead and another person wounded during a chaotic night of demonstrations over the shooting of Jacob Blake in Kenosha, Wis., officials said on Wednesday.

A court document from Lake County, Ill., shows that Kyle Rittenhouse, 17, was arrested in Antioch, Ill., on Wednesday morning after being charged with first degree intentional homicide in the fatal shooting that took place only hours earlier. (emphasis added)

The Times report portrays the event as “chaotic,” and it’s filled with details like this: “Tuesday evening was spent in a shifting, hourslong standoff between the police and protesters. Protesters assembled outside a newly erected metal barrier protecting the courthouse and threw water bottles, rocks and fireworks at the police.”

As we’ll see, the event was a lot less chaotic than it was reported to be. The order behind the chaos was cops appearing to work with the right-wing thugs to suppress the actual protesters.

This brings us to the shooter, Kyle Rittenhouse.

According to the Huffington Post report of the incident, “Police are investigating a group of men with guns who were lined up outside businesses a few blocks down the road from the courthouse, according to The New York Times. Ostensibly, the vigilantes were there to “protect” businesses from fires that had been set during previous nights of demonstrations. Though Rittenhouse’s connection to vigilante groups is unclear, he was quoted before the shooting saying that he considers himself a militiaman and was willing to use his rifle to “protect” people and property.”

And Rittenhouse was very pro-cop. “A now-deleted Facebook page that appears to belong to Rittenhouse featured almost exclusively pro-police imagery and photos of the suspect carrying guns. At some point, he changed his profile image to a “Blue Lives Matter” sign and held a fundraiser for a police nonprofit called “Humanizing The Badge.” 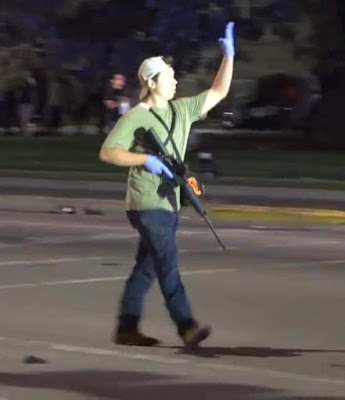 Kyle Rittenhouse in Kenosha (source)
“We’re going to push them down by you, ’cause you can deal with them, and then we’re going to leave”

What’s missing from these reports, both of which whitewash police actions, are details like these:

Cell phone video shows Kenosha Wisconsin police officers in an military vehicle telling armed White militia members they “appreciate them being there” and giving them bottled water; while in the background cops can be heard ordering protestors to disperse. pic.twitter.com/73SsfCUYWj

and these (click through to the video to hear, “cops told us, we’re going to push them down by you, ’cause you can deal with them”):

Here, a militia member says cops told them they would “push” the protestors towards them because they knew they could handle them. pic.twitter.com/S6lzmJfOJe

Heard with my own ears on the scanner in Kenosha last night: “I can’t tell if those are protestors or our guys” – says a cop as a group of 100 or so people was moving from one area to another. He was referring to the armed vigilantes “our guys” of course. #DefundThePolice

Even Rashida Tlaib understands what happened:

Look at him roaming freely while protestors are met with military war like equipment and tear gas. https://t.co/Va7wkf9X8l

There are more reports like these, which, of course, will either go viral, or go unreported by the media most people read and listen to.

It’s more than obvious by now that cops are siding with right-wing thugs, using them even, against whoever stands with the protesters. When will this end?

It will never end by ordinary, electoral means… 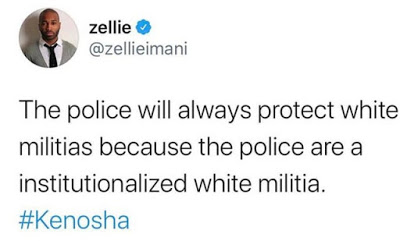 …until those elections are backed by the kind of organized, 1960s-style movement… 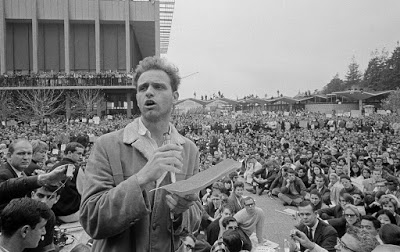 The nation may not be to that point yet, but it’s not far away. That’s why big-media outlets like the New York Times want to paint these protests, all of them, as either “chaotic” or left-wing-violent only, and why they hide the state violence that incites and encourages those violent responses. A real left-wing movement — a 1960s-style revolt, a real rising of the people — is the stuff of nightmares for editors at the Times, and many of its readers as well.

Yet … what will make a change that makes real change? Electing more Democrats? If they’re the right ones, yes, that’s needed but not enough.

Will the eighteenth protest after the thirtieth police murder of the hundredth or two-hundredth victim, black, brown or poor, of state-enforced austerity and racism — will that finally make a difference?

We’ve seen this movie. Trayvon Martin was murdered in 2012. How are things different today? What has America done since that sad day to make lives better and safer for the victims of our police — and the victims of the economic system that creates police victims?

You know in your hearts that the day of Real Resistance is coming.