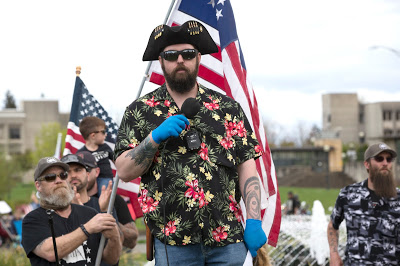 Boogaloo Boys. Are these people any match for the hegemonic state?

“When the government watches you 24 hours a day, you can’t use the word ‘liberty.’ That’s the relationship between a master and a slave.”
—Chris Hedges, speaking with Juliana Forlano

There’s more in Julianna Forlano’s Act.tv interview with Chris Hedges than I can do justice to in a short piece, but I will say he has all the answers; he’s figured it out.

Forlano’s questions are brilliant and she asks the right ones, from the meaning of the Assange extradition hearing to whether there will be a revolution in the U.S., what it will look like, and what the elite response will look like. His thoughts on the Sanders campaigns (both of them) are more nuanced than you might think based on Hedges’ oft-played soundbites, and they make perfect sense.

The same with Hedges. When you start from his starting point, what you see around you soon becomes perfectly clear.

A New Totalitarian State or the One We Have Already?

But let’s focus briefly on just one of the questions he was asked, about the possible emergence of a new, Trump-led totalitarian state, a possibility liberals and other Biden supporters are making much noise about these days. And like Hedges, let’s start from the right starting point, which is this:

Biden is the candidate of the elites, of almost everyone who counts in America. For them, Trump is an aberration, a mole that must be removed.

If that isn’t obvious, it should be — the evidence is everywhere, from all the non-Fox news sources, to the behavior most of our public figures, even to the behavior of a great many Republican leaders.

Given this as context, let’s look at the possibility of a “descent into Trump-led totalitarianism” during and immediately following the next election. In short, will Trump seize power, dictator-like, to win and rule like Mussolini?

1. Trump doesn’t have the backing of the military; they’ve made that perfectly clear. Without the military, the only possible coup will have to come from the courts.

2. Trump may have the instincts of a dictator, but he doesn’t have the skills or the desire to put in the work. Frankly, if he really wanted to be a dictator, he’d be one already.

He’s an egocentric, relatively mindless, easily distracted, lazy, unbright narcissist whose monomania is simply himself — the incoming adoration he basks in minute-to-minute; the minute-to-minute state of his pleasure; the joy he takes in disrupting any room he’s in before he leaves it.

Sure he’s a person like the rest of us in many ways — he’s functional, or his kids would put him away — and he has a feral understanding of interpersonal dominance.

But he does wake up each day asking, “How can I be more like Mussolini?” It doesn’t seem so. From all appearances, instead he wakes up asking, “How can I enjoy myself today? Where’s my fun going to come from? Let’s start with a couple hours of Fox, and see where things go from there.”

3. Finally, as noted above, Trump is not the candidate of the oligarchy, of the American hegemonic state and most of its “private” organs like CNN and the mainstream press. Biden is their candidate, and it’s been obvious since forever.

Bankers are perhaps agnostic about his election, but if they have pro-Trump preferences they can easily surrender them. After all, the bankers will make bundles either way. Same with the energy giants. Biden is talking a decent climate-change game, but his actions send messages everyone understands: “Fossil fuel profits are safe in my administration.”

The risk that the Democratic Party will disrupt the Establishment game has been dispatched. They kicked Sanders and his people off the Interstate months ago. Let them complain; it’s back roads for all of them now. As an alternative to Trump, the Party now offers a new Ronald Reagan, their sleepy iteration anyway, and they’re begging Reagan voters to vote for him.

Who among those who matter could complain about that?

Battles in the Courts, Not in the Streets

With this new context in mind, let’s look at the terror-porn fantasy, war in the streets with a Nazi Germany outcome, by considering these four cases.

• If Biden wins in a landslide, he’s in and nothing can unseat him. The Boogaloo Boys may take to the streets, and if so, the cops will coddle them. But if protest turns into a battle between Boogaloos and Biden supporters, the state will eventually shut the whole thing down and let it die off, as it did with the left-inspired George Floyd protests.

• If Trump wins narrowly — by less than the number of disqualified ballots, for example — there will be disruption for a while, but then it will go to the courts, probably a whole series of them, state and federal. Public life will be messy and uncomfortable for a while and people will take to the streets.

But when the courts decide the outcome, it will be over. Someone, most likely not Trump, will be president, though a Trump win is possible.

Keep in mind, Trump is not the candidate of the oligarchy, of the small clutch of people who actually run the country. Biden is.

So Biden has the edge. If the presidency can be handed to Biden it will be. If it has to be handed to Trump, it will be, but not because the Boogaloos and their fascist cop friends let the streets run red with anger. It will be handed to Trump because Trump’s case is too strong to overturn, even for the oligarchs.

And if you fear a Supreme Court coup like the one in 2000, ask yourself: Who was the candidate of the oligarchy in that election? Clearly it was Bush; even the mainstream press hated Gore, assigning his worst critics to cover his campaign. So of course when the Supreme Court decided in Bush’s favor, there wasn’t much fuss and enough affirmation that even the public stood down.

Yes, the Roberts Court is a right-wing court, but would even John Roberts, who sees as his primary mission “to protect the Court’s legitimacy,” let the Court rule for Trump if Biden’s case was strong enough to go with and all the elites were solidly on his side?

It’s possible, but I don’t think so. Remember, most of the Republican powerful hate Trump as well, and the oligarchy’s candidate is Biden. Republicans can take another shot in 2024, not that far away, and Biden in the meantime could prove useful.

In addition, a narrow Trump win will be questionable at best — it’s already looking a bit rigged — and easy to overturn if one is inclined to. If the Court does decide against Biden, the reasons will have to be solid, since oligarchic thumbs, many on Republican hands, will be tilting scales toward Biden throughout the process.

Bottom line: Roberts is a Republican. Which Republican powers will he listen to?

• Finally, if Biden wins narrowly, he’s in for sure. Again, it will take a bunch of court cases to sort it out, and the nation will look a bit of a mess for a while. But in the end, the candidate of the elites — the people with real power — just won’t be denied, especially if the alternative is four more years of that “moron” Trump’s sobriquet among most of them, including many who serve ostensibly work for him.

Yes, a close Biden win will spark a kind of war in the streets, at least for a while. But do you think the guardians of the state will let street punks, even their own street punks, put “that moron” back in power, when they have Joe Biden teed up and ready to go?

For the reasons noted above, I think even Justice Roberts will go along.

Biden was almost created for just this moment, to be the able caretaker of our predatory state at a time when most of the country would elect a stuffed doll just to be rid of Trump. In the short run at least, voters and elites alike just want someone to get the machine rolling again, regardless of what it does. With Biden in charge, the machine can shift back into high and return to course.

After our Trumpian nightmare, Biden looks like a dream. But not for long. Biden could bring his own nightmare. It’s after Biden wins and rules for a while — shows his own destructive inclinations — that a real war could begin.

I’ll make a prediction. After Biden takes power on behalf of the people he really represents — predatory elites who care only about themselves and will gladly let people sicken and die in droves so long as their profits are safe — the battle won’t be oligarchs versus Trump. That day is done; our lazy, incompetent captain of the hegemonic ship will be gone for good.

Instead, the combatants will be Biden and the ruling elite … against almost everyone else whose lives they control, citizens of a nation whose hurt they will never heal.

If you truly fear a modern civil war, fear it after the oligarchs retake control.

(Today’s title, “Civil War? What Civil War?” echoes the title of this Nicole Sandler interview — “Crisis? What Crisis?” — in which Nicole and I discuss many of these same subjects. If you click to listen, the interview starts at the 26-minute mark.)