Jerri-Lynn here. More analysis of the ongoing U.S. unemployment crisis, sparked as we are all well aware by the COVID-19 pandemic. I don’t think policy-makers have any idea what to do – or more accurately, what they could do that will be acceptable to their donors. Progressive economists have policy ideas, but alas there is little chance of them being adopted – that is absent much higher levels of social unrest.

Total continued claims for unemployment insurance (UI) under all state and federal programs rose by 380,000, to 29.6 million people (not seasonally adjusted), the highest since August 1, according to the Department of Labor this morning. This was the second weekly increase in a row, after the 2.2-million jump last week.

These 29.6 million people who continued to claim UI under all programs translate into 18.4% of the civilian labor force of 161 million: 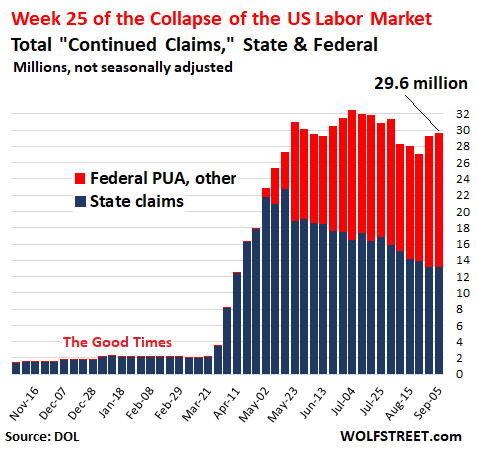 Red columns – continued claims, federal & other programs: +326k
The number of people on UI under all federal programs established by the CARES Act and some other programs rose by 326k to 16.4 million (not seasonally adjusted):

Initial claims under the federal PUA program for contract workers jumped to 839k in the week ended September 5, from 748k in the prior week (not seasonally adjusted).

Initial claims under state programs rose by 20k to 857k (not seasonally adjusted) in the week ended September 5, remaining in the same range now for five weeks, and there has been no improvement: 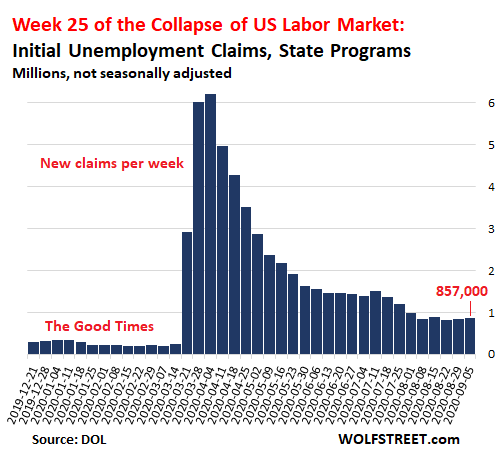 State plus federal PUA initial claims combined jumped to 1.70 million (not seasonally adjusted). These are people who’d newly lost their work and filed for UI during the week ended September 5, translating into a monthly rate of over 7 million people who are still losing their work and file for UI.

The Picture That Emerges

That 1.7 million people getting newly laid off and filing for UI in the last week is a deterioration of similar terrible numbers over the four prior weeks. This means that these companies are still shedding massive numbers of people. At the same time, a smaller number of people that had received UI have gotten a job, and continued claims deteriorated further to 29.7 million claims. This is a huge number of people on UI, and it has gone in the wrong direction for the second week in a row.

There is a churn and a shift going on, with some companies and sectors hiring large numbers of people – retailers, ecommerce operations of all kinds including fulfillment and shipping, restaurants, the lodging industry, etc. – while other industries are now shedding jobs. This includes small and medium-size businesses that have received PPP loans whose effective data range has now expired.

And it includes large companies, including tech companies, where wages are higher. After having vowed during the early phases of the crisis not to do so, they’re now laying off staff. It’s a sort of sector rotation of layoffs. Read… The Second Wave of Layoffs is Here, Now Hitting Well-Paid Jobs