This is Naked Capitalism fundraising week. 1430 donors have already invested in our efforts to combat corruption and predatory conduct, particularly in the financial realm. Please join us and participate via our donation page, which shows how to give via check, credit card, debit card, or PayPal. Read about why we’re doing this fundraiser, what we’ve accomplished in the last year, and our current goal, more original reporting.

Patient readers, this will be a quite skeletal Water Cooler, because for some reason the Command-V (Paste) keyboard combination stopped working, along with the capital “” (r). The Command key works, the “V” key works, but they just don’t work together. (They are not even recognized by System -> Keyboard -> Shortcuts, where I was trying to be clever by adding a shortcut key combination to replace the one that should be built in.) Since I am copying and pasting constantly while I blog, that’s a real problem, and using the menu would drive me crazy (besides killing my productivity).

I spent a good deal of time fiddling with various parameters and restarting the machine, but to now avail. So I will go forth tomorrow and get a new USB keyboard, since the Arrow keys on this one are shot anyhow. (This is my USB keyboard. I could use the built-in keyboard, except most of the right side is dead, including the Delete key. So that’s not really a way forward.) The bright side is that the Apple USB keyboards feel very good! –lambert

I’ve always wanted to know what a penguin sounds like. Now I do!

Here are the United States regions: 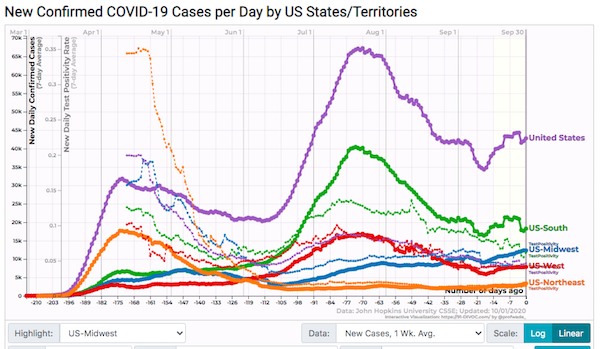 Flattening continues… Except for that unsightly uptick.

Here are the Swing States as I conceive them (see below): 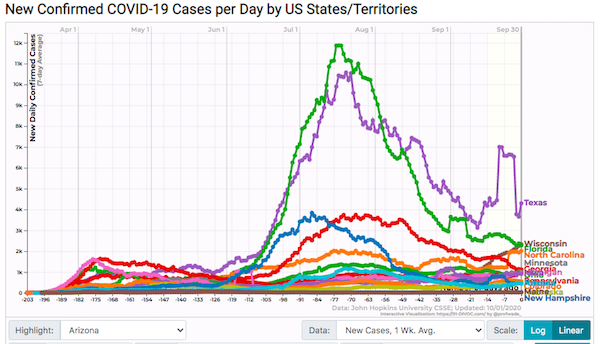 Click the map to create your own at 270toWin.com

Here is an early voting calendar. Maybe we’ll have a whole series of October surprises, since election day is gradually being devalued as an event.

And here are mail-in voting ruies, which naturally differ state by state.

“How to Vote in 2020: Everything You Need to Know” [Bloomberg]. “Casting a ballot in the U.S. isn’t always easy, with a complex web of varying state rules governing how and when you can vote. The Covid-19 pandemic has introduced even more complexity in 2020, as many states have made significant changes to allow for more early voting or voting by mail. More changes could come as lawsuits in several states wind their way through the courts. That’s why Bloomberg News is answering these critical questions so you’ll know what you need to do to make sure your vote is counted in the 2020 election.”

Here are is an enormous spreadsheet on voting equipment, so you can check your own jurisdiction (hat tip, UserFriendly. I should really aggregate these onto a map…).

Two further observations on the debate:

First, I watched the debate yesterday (after listening to it once) on a big screen with a group of Democrats, who were a lot less raucous than I expected; they didn’t treat it like a sports event, so there was no whooping or hooting. Watching, it turns out, is different from listening. What’s interesting about Trump is that he is always in the moment. Say what you like about him, he is always listening and reacting. I would imagine that’s a very useful quality for a real estate salesman. (The same quality was also useful to him in 2016 with his A/B testing of messaging on crowds). The debate took place on a split screen, and that helped Biden and hurt Trump, because as Trump did his Trump thing, you could simultaneously see Biden’s stunned amazement at the unprecedented scene unfolding before him, a feeling shared by many in the audience. Occasionally, Biden would flash a smile; he has a good smile. However, I think the screen also hurt Biden. Biden would often turn away from Trump and Wallace, and address the camera directly, with a (no doubt prepared) speech. When he did — my very subjective impression, here — his startlingly blue eyes seemed fixed, and somehow too small. His skin, especially the skin of his forehead, seemed oddly papery. Though Biden doesn’t walk or stand like he’s frail, in those addresses he looked frail. Trump, by contrast, looked vital, despite his girth. I’d like to hear if other reads saw what I saw.

I didn’t watch the debate, but caught 2-3 minutes as I was setting up the coffee pot in the kitchen before bed as Husband watched in the living room. It was early in the debate I think (just after 2100) and already I couldn’t understand what they were debating because they were talking over one another and Biden called Trump a clown while Trump declared that Biden had lost the Left after Biden rejected some Bernie-style policy (this is actually a brilliant line of attack I thought). That was enough for me and I went straight to bed.

My mother watched some of it. She is a life-long conservative and deeply sincere Evangelical who voted for Trump in 2016 only in the hopes that he would destroy the path the Republican Party was heading down and force the Rs to moderate a bit. She has been deeply disappointed and she HATES Trump. She was going to grudgingly vote for Biden – she had already marked her ballot received in the mail this week. Her first ever D vote in a presidential election.

But she said she watched just for a few minutes last night and now she unsure she is going to bother turning in her absentee ballot at all.

Have any other readers seen the same? Laruse concludes:

It sounds like it was a full on Bread and Circuses style event that alienated a lot of people. My guess at this point Trump wins next month pretty handily.

Perhaps. If there are a lot of voters who reacted as Laruse’s mother did.

One further observation that’s been rattling around in my head for awhile: It’s on the central metaphor for lesser evilism. On Biden v. Trump:

Nina Turner, a co-chair of the Sanders campaign, told me she has no appetite for the choice she faces: “It’s like saying to somebody, ‘You have a bowl of sh*t in front of you, and all you’ve got to do is eat half of it instead of the whole thing.’ It’s still sh*t.”

The problem with that metaphor is that it still assumes the premise of lesser evilism; that is, it focuses on the fact that the Democrats are making you eat sh*t, albeit in lesser or greater quantities. It is possible, after all, to make the case that it really is better to eat half a bowl of sh*t; it takes less time, for example. You might swallow a manageable dose of e. coli, instead of a lethal one. And so forth.

I don’t expect to kill off the “half a bowl” (or bucket) “of sh*t” (or its cousin, a “sh*t sandwich vs. a sh*t sandwich with sh*t topping”) but I would like to propose a better one, a sort of thought experiment.

The International Weightlifting Federation has established classes for weightlifters, determined by body mass; the highest (heaviest) class is 192 pounds. Let’s assume — the metaphor starts here — that the problems of our country are a thousand pound barbell; a barbell so heavy only a weightlifter of the highest class can deadlift it.

We place The Barbell of Our Country’s Problems before two weightlifters. Weightlifter T is (as it were) a flyweight: 121 pounds. Weightlifter B is a welterweight: 148 pounds.

Neither weightlifter T nor weightlifter B can lift The Barbell of Our Country’s Problems. It doesn’t matter that B outweighs T by two whole classes and 47 pounds. It doesn’t matter that Biden is better, and Trump is lesser. They are not in the right class. Neither can lift the weight. Neither is adequate to the task. Neither is fit for purpose. The only differences between them will appear in how they injure themselves trying to do what they cannot do, and which sections of the audience cheer them on as they sweat and strain and fail. (So I suppose I am coming to agree with Laruse’s mother.)

So, that’s my new metaphor. I don’t think it’s concise enough for Twitter, though. Maybe some helpful readers can improve on it. Or shoot it down!

“Early Works by Edward Hopper Found to Be Copies of Other Artists” [New York Times]. It turns out that Hopper, as a teenager, copied at least two paintings, at a time “before the advent of modern art and its freedoms, [when] artists almost always got their start by copying. The conclusion is more interesting than the gotcha: “Mr. Shadwick’s discovery about those first paintings may also illuminate Hopper’s much later, most iconic masterpieces. Critics and scholars have always been intrigued by an awkwardness that Hopper allowed himself in many of his classic paintings: seas that look more painted than liquid in his famous ‘Ground Swell’; the awkward anatomy of his female nude in ‘Morning in a City’ or the stony faces of the diners in ‘Nighthawks.’ Now that we know that Hopper was never a painting prodigy, we can think of his later paintings as deliberately revisiting the limitations of his adolescence, and finding virtue and power there. That’s a classic move in American culture: To see the unschooled and homespun as more authentic — and especially as more authentically American — than the sophistries of those decadent old Europeans.” • I think we’d better start revising the canon…

“Strange Apprentice” [London review of Books]. “For a while in the 1870s – once, twice, maybe three times, each over a period of weeks and months – and then again briefly in the early 1880s, Cézanne and Pissarro painted together. At the time of the first visit, in early summer 1873, Cézanne was 34 and Pissarro 42. The age difference disguises a complex story. Cézanne was graceless, immature, belligerent, foolhardy in his early thirties, but when he went to work with Pissarro he had already built, in the previous five years, a tremendous way of painting: it seems best to call it his ‘first style’ rather than his early one, because the amalgam of Courbet’s thick handling, Manet’s aggression and Delacroix’s cold lasciviousness clearly issued from half a lifetime of brooding on what French painting had been and might become…. Nonetheless, Cézanne came to Pissarro to unlearn his first style, and, seemingly, to change his mind about Courbet, Manet and Delacroix; or at least about what might be made from them, from their attitudes (their subjects, their stances) and their materials. Provocation in art would give way to patience, to exposure to optical events.” • I like the, er, picture of Cézanne and Pissarro painting together. I wonder if that was something that the field easel enabled, along with painting en plein air.

Readers, feel free to contact me at lambert [UNDERSCORE] strether [DOT] corrente [AT] yahoo [DOT] com, with (a) links, and even better (b) sources I should curate regularly, (c) how to send me a check if you are allergic to PayPal, and (d) to find out how to send me images of plants. Vegetables are fine! Fungi and coral are deemed to be honorary plants! If you want your handle to appear as a credit, please place it at the start of your mail in parentheses: (thus). Otherwise, I will anonymize by using your initials. See the previous Water Cooler (with plant) here. Today’s plant (Carla): 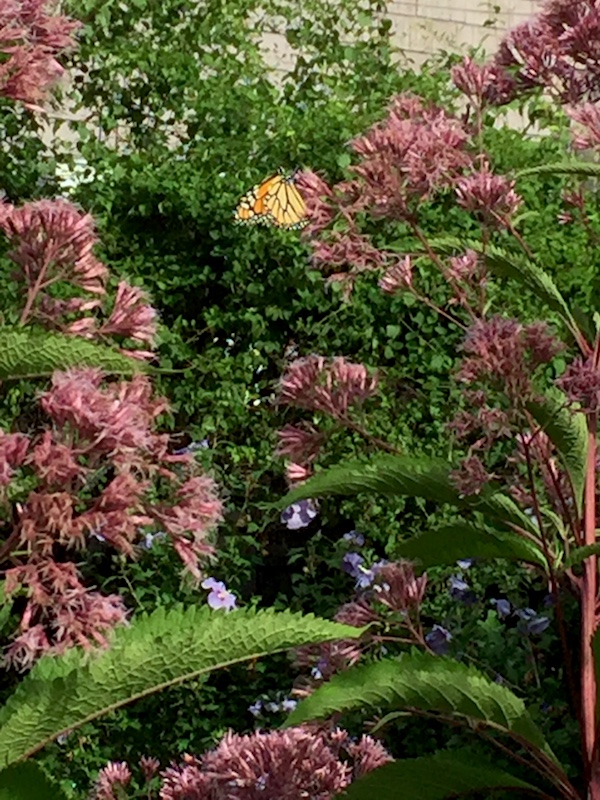