This is Naked Capitalism fundraising week. 1501 donors have already invested in our efforts to combat corruption and predatory conduct, particularly in the financial realm. Please join us and participate via our donation page, which shows how to give via check, credit card, debit card, or PayPal. Read about why we’re doing this fundraiser, what we’ve accomplished in the last year, and our current goal, more original reporting.

Yves here. Note the author takes pains to stress that the death rates in the three social-order-changing pandemics he analyzes were vastly higher than anyone expects to see from Covid-19. However, many of our systems are much more tightly coupled than before, so it’s possible to see more durable changes than, say, the Spanish flu wrought.

Before March of this year, few probably thought disease could be a significant driver of human history.

Not so anymore. People are beginning to understand that the little changes COVID-19 has already ushered in or accelerated – telemedicine, remote work, social distancing, the death of the handshake, online shopping, the virtual disappearance of cash and so on – have begun to change their way of life. They may not be sure whether these changes will outlive the pandemic. And they may be uncertain whether these changes are for good or ill.

Three previous plagues could yield some clues about the way COVID-19 might bend the arc of history. As I teach in my course “Plagues, Pandemics and Politics,” pandemics tend to shape human affairs in three ways.

First, they can profoundly alter a society’s fundamental worldview. Second, they can upend core economic structures. And, finally, they can sway power struggles among nations.

Sickness Spurs the Rise of the Christian West

The Antonine plague, and its twin, the Cyprian plague – both now widely thought to have been caused by a smallpox strain – ravaged the Roman Empire from A.D. 165 to 262. It’s been estimated that the combined pandemics’ mortality rate was anywhere from one-quarter to one-third of the empire’s population.

While staggering, the number of deaths tells only part of the story. This also triggered a profound transformation in the religious culture of the Roman Empire.

On the eve of the Antonine plague, the empire was pagan. The vast majority of the population worshipped multiple gods and spirits and believed that rivers, trees, fields and buildings each had their own spirit.

Christianity, a monotheistic religion that had little in common with paganism, had only 40,000 adherents, no more than 0.07% of the empire’s population.

Yet within a generation of the end of the Cyprian plague, Christianity had become the dominant religion in the empire.

How did these twin pandemics effect this profound religious transformation?

Rodney Stark, in his seminal work “The Rise of Christianity,” argues that these two pandemics made Christianity a much more attractive belief system.

While the disease was effectively incurable, rudimentary palliative care – the provision of food and water, for example – could spur recovery of those too weak to care for themselves. Motivated by Christian charity and an ethic of care for the sick – and enabled by the thick social and charitable networks around which the early church was organized – the empire’s Christian communities were willing and able to provide this sort of care.

Pagan Romans, on the other hand, opted instead either to flee outbreaks of the plague or to self-isolate in the hope of being spared infection.

This had two effects.

First, Christians survived the ravages of these plagues at higher rates than their pagan neighbors and developed higher levels of immunity more quickly. Seeing that many more of their Christian compatriots were surviving the plague – and attributing this either to divine favor or the benefits of the care being provided by Christians – many pagans were drawn to the Christian community and the belief system that underpinned it. At the same time, tending to sick pagans afforded Christians unprecedented opportunities to evangelize.

Second, Stark argues that, because these two plagues disproportionately affected young and pregnant women, the lower mortality rate among Christians translated into a higher birth rate.

The net effect of all this was that, in roughly the span of a century, an essentially pagan empire found itself well on its way to becoming a majority Christian one.

The Plague of Justinian and the Fall of Rome

The plague of Justinian, named after the Roman emperor who reigned from A.S. 527 to 565, arrived in the Roman Empire in A.D. 542 and didn’t disappear until A.D. 755. During its two centuries of recurrence, it killed an estimated 25% to 50% of the population – anywhere from 25 million to 100 million people.

This massive loss of lives crippled the economy, triggering a financial crisis that exhausted the state’s coffers and hobbled the empire’s once mighty military.

In the east, Rome’s principal geopolitical rival, Sassanid Persia, was also devastated by the plague and was therefore in no position to exploit the Roman Empire’s weakness. But the forces of the Islamic Rashidun Caliphate in Arabia – which had long been contained by the Romans and Sasanians – were largely unaffected by the plague. The reasons for this are not well understood, but they probably have to do with the caliphate’s relative isolation from major urban centers.

Caliph Abu Bakr didn’t let the opportunity go to waste. Seizing the moment, his forces swiftly conquered the entire Sasanian Empire while stripping the weakened Roman Empire of its territories in the Levant, the Caucasus, Egypt and North Africa. 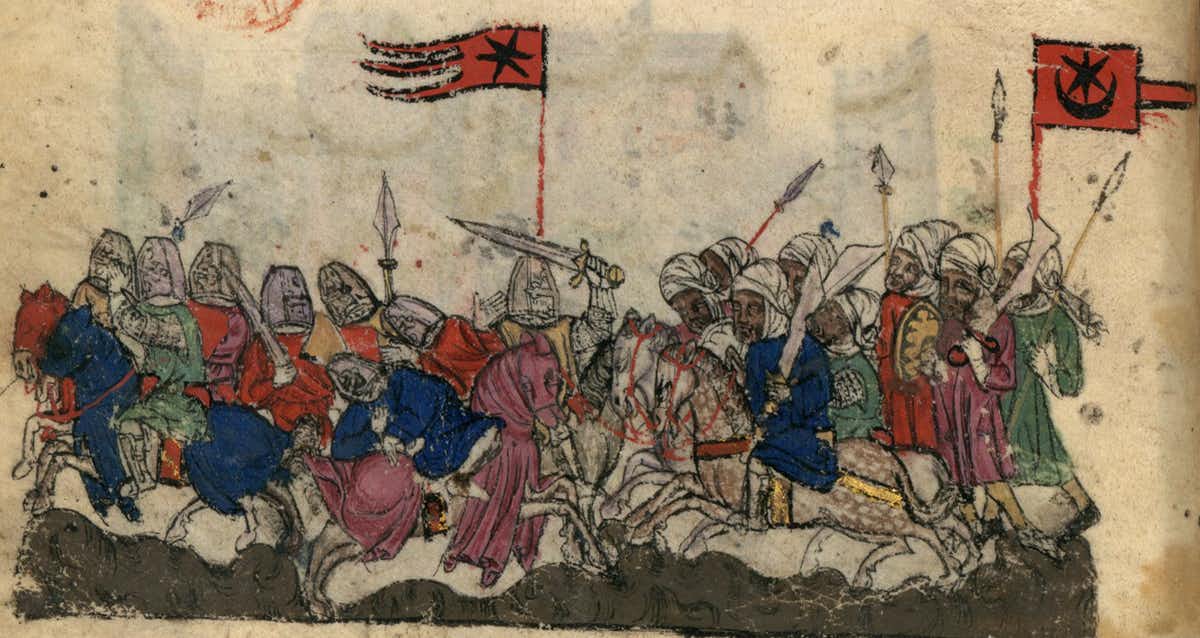 This last civilization – what we now call medieval Europe – was defined by a new, distinctive economic system.

Before the plague, the European economy had been based on slavery. After the plague, the significantly diminished supply of slaves forced landowners to begin granting plots to nominally “free” laborers – serfs who worked the lord’s fields and, in return, received military protection and certain legal rights from the lord.

The seeds of feudalism were planted.

The Black Death of the Middle Ages

The Black Death broke out in Europe in 1347 and subsequently killed between one-third and one-half of the total European population of 80 million people. But it killed more than people. By the time the pandemic had burned out by the early 1350s, a distinctly modern world emerged – one defined by free labor, technological innovation and a growing middle class.

Before the Yersinia pestis bacterium arrived in 1347, Western Europe was a feudal society that was overpopulated. Labor was cheap, serfs had little bargaining power, social mobility was stymied and there was little incentive to increase productivity.

But the loss of so much life shook up an ossified society.

Labor shortages gave peasants more bargaining power. In the agrarian economy, they also encouraged the widespread adoption of new and existing technologies – the iron plow, the three-field crop rotation system and fertilization with manure, all of which significantly increased productivity. Beyond the countryside, it resulted in the invention of time and labor-saving devices such as the printing press, water pumps for draining mines and gunpowder weapons.

In turn, freedom from feudal obligations and a desire to move up the social ladder encouraged many peasants to move to towns and engage in crafts and trades. The more successful ones became wealthier and constituted a new middle class. They could now afford more of the luxury goods that could be obtained only from beyond Europe’s frontiers, and this stimulated both long-distance trade and the more efficient three-masted ships needed to engage in that trade.

The new middle class’s increasing wealth also stimulated patronage of the arts, science, literature and philosophy. The result was an explosion of cultural and intellectual creativity – what we now call the Renaissance.

None of this is to argue that the still-ongoing COVID-19 pandemic will have similarly earth-shattering outcomes. The mortality rate of COVID-19 is nothing like that of the plagues discussed above, and therefore the consequences may not be as seismic.

But there are some indications that they could be.

Will the bumbling efforts of the open societies of the West to come to grips with the virus shattering already-wavering faith in liberal democracy, creating a space for other ideologies to evolve and metastasize?

In a similar fashion, COVID-19 may be accelerating an already ongoing geopolitical shift in the balance of power between the U.S. and China. During the pandemic, China has taken the global lead in providing medical assistance to other countries as part of its “Health Silk Road” initiative. Some argue that the combination of America’s failure to lead and China’s relative success at picking up the slack may well be turbocharging China’s rise to a position of global leadership.

Finally, COVID-19 seems to be accelerating the unraveling of long-established patterns and practices of work, with repercussions that could affet the future of office towers, big cities and mass transit, to name just a few. The implications of this and related economic developments may prove as profoundly transformative as those triggered by the Black Death in 1347.

Ultimately, the longer-term consequences of this pandemic – like all previous pandemics – are simply unknowable to those who must endure them. But just as past plagues made the world we currently inhabit, so too will this plague likely remake the one populated by our grandchildren and great-grandchildren.