Starlings in the Scottish skies Reuters (Re Silc). A murmuration.

Got any signal up here? Nokia to build mobile network on the moon Reuters

Convalescent plasma in the management of moderate covid-19 in adults in India: open label phase II multicentre randomised controlled trial (PLACID Trial) British Medical Journal. Conclusion: “Convalescent plasma was not associated with a reduction in progression to severe covid-19 or all cause mortality. This trial has high generalisability and approximates convalescent plasma use in real life settings with limited laboratory capacity.”

Players are terrified of COVID, but don’t want to speak up for fear of angering the NFL Deadspin

Ventilation and air filtration play a key role in preventing the spread of COVID-19 indoors USA Today. Note the importance of outside air. Also, leave the party early, before the “smoke” builds up.

OpenStack at 10 years old: A failure on its own terms, a success in its own niche The Register. Read all the way to the end.

The ‘Caspian Sea Monster’ rises from the grave CNN

was it just me, or did Biden describe his public option during the debate as kind of a backstop to medicaid for those who fall through that program’s (wide-in-some-states) cracks? in Biden’s plan would the public option be available to all who want it, or just ppl of low means?

“Fall through the cracks, according to Joe Biden. See the transcript:

What I’m going to do is pass Obamacare with a public option, and become Bidencare. The public option is an option that says that if you in fact do not have the wherewithal, if you qualify for Medicaid and you do not have the wherewithal in your state to get Medicaid, you automatically are enrolled, providing competition for insurance companies. That’s what’s going to happen.

“Available to all who want it,” according to the Biden campaign:

I assume the Democrats will go with what Biden actually said (and not “Joe’s Plan”) because that’s mean-tested, and doubles down on the “because markets” paradigm that would already have driven down costs under ObamaCare, were it true. In fact, costs increased, while gaps in coverage remained. Fortunately, it will only take another two or three Presidential cycles before the political class admits that the public option was a scam all along. You can do the math on the deaths; over time, they’re social murder on a pandemic scale.

This is about what I would have expected. Trump lost all 5 of his general election debates (2 against Biden and 3 against Clinton) per CNN polling. This was actually the second-closest margin out of those (he lost the final debate in 2016 by 13 points). https://t.co/0GdVORINS7

If they wanted to, Dems could destroy Trump on his — successful — 2016 con. Trump was going to drain the swamp and help the working class. He’s done the opposite. Biden could hammer him on that if he wanted to.

The heel didn’t turn into a face:

My big post-debate takes:
1. That was bleak as hell
2. Trump did not look like he felt great about that when it was over, Biden had something of the winner's spring in his step.

I'd be surprised if tonight's debate changed the minds of 3 people.

The named experts pushing a special tech regulator instead of antitrust enforcement are:

Mitch McConnell, 78, DENIES he has any health problems amid speculation over why his hands are badly bruised and covered in band-aids Daily Mail. VIvid photos, as is usual with the Mail.

‘It’s a Very Determined Power Play to Pack Our Court’ FAIR. To which the Democrat answer was a boycott? Were they wearing Kente cloth, too?

President Trump is benefiting from single-payer, single-provider health care. We all should STAT

People Need to Reclaim the Internet Craig Murray. But:

That's a major issue too. The fact that only a few American outlets even asked for credentials to cover the Assange case was awful. It's all related: they're constantly narrowing the parameters of permissible information flow. https://t.co/USLoG5LM1A

What I Learned in Twitter Purgatory The Atlantic. From September, still german:

I have been evicted from Facebook. No explanation. No appeal. I have downloaded "my information" and see nothing that explains it.

We are governed now in private, by entities that make their own rules and are answerable to no process. Disaster is inevitable. We are living it. pic.twitter.com/JBTFH2devl

Airbus set to boost production of world’s most popular passenger jet FT. Well, I guess Boeing can always go into the repair business.

Imagining the End of Capitalism With Kim Stanley Robinson Jacobin. I quite liked New York 2140; hat tip to the reader who suggested it.

No Matter Who Wins, The War Machine Wins Caitlin Johnstone

Antidote du Jour (via AM): 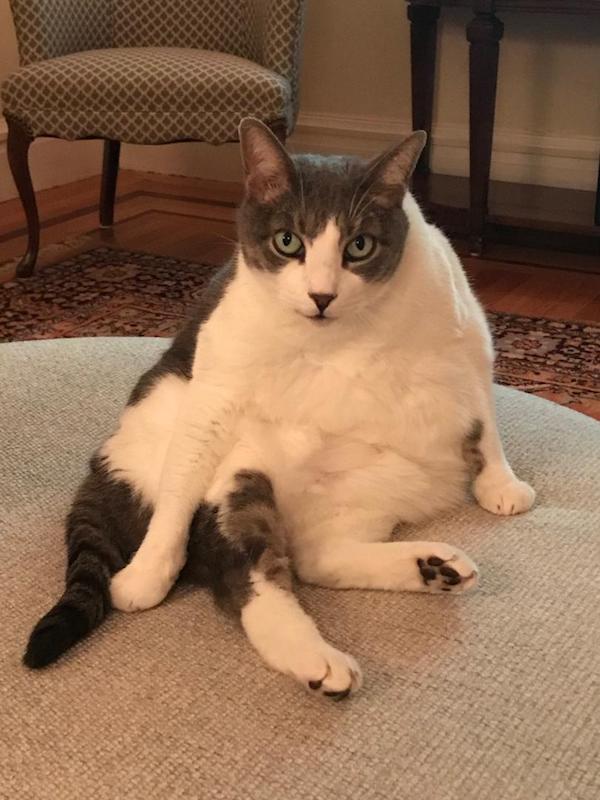 AM writes: “I think the fact that I took this picture makes me a bad cat parent but I couldn’t resist.”