Yves here. Yesterday, we published a post by Phillip Alvelda, Thomas Ferguson, and John C. Mallery: To Save the Economy, Save People First: Targeted Measures and Subsidies for Cost Effective COVID-19 Abatement.

With over ten months of data from dozens of coronavirus hotspots around the world, statements proclaiming the futility of lockdowns are now provably false. Strict lockdowns do work, and they work swiftly, within 4-6 weeks. They worked not only to suppress, but to virtually eliminate the virus in Australia, New Zealand, and Iceland, as well as in China, Korea, and Taiwan. Figure 1 below tells the story in one picture of new COVID-19 case counts by country….

The uncomfortable reality is that the pandemic doesn’t respond to political ideology, especially when it flies in the face of nature and reality. Those who resist lockdowns and containment measures early in the wave of infections are not, in fact, avoiding lockdowns. What they are really doing is guaranteeing that the inescapable lockdown will happen regardless, and will have to be more stringent, and for much longer, because they refused more moderate action earlier. (And it will cost more and more, all along the way until the virus is suppressed.) This conclusion follows from the way coronavirus infections ramp up exponentially and taper off much more slowly. All the economy-first boosters are really doing is trading off a few weeks of “freedom” up front for months of extra lockdown on the back-end once the hospitals are overwhelmed and allowing tens of thousands of people to die needlessly in the process.

Doubters should compare the recent trajectories of Belgium and Germany. In the face of the virus resurgence, they both instituted new abatement measures at the same time. But Belgium waited until the prevalence was 10x higher than Germany’s threshold to act. The economic difference? Belgium was forced to completely close the economy, while Germany took much milder measures to decrease maximum meeting sizes and adjust the restaurant capacity limits, but otherwise kept the economy open for business.

Some readers argued that the claim (underlined) had not been substantiated. The authors of the post respond (albeit a bit curtly due to competing demands):

The critic should take a longer look at the data.

The Belgian case shows that strict lockdowns work. But let’s begin with Australia. The data tells the story. (Each vertical line separates one week.)

Whether Australia decided to stay locked down or not is independent, to some extent, of how the lockdown worked.

You can see from the data… first lockdown…worked inside four weeks. Second one tool a little longer, close to eight weeks because they waited too long, and the lockdown wasn’t particularly strict, certainly looser than Wuhan, Singapore, Korea, or Taiwan, say. Supports our points exactly.

Tighter lockdowns with more stringent measures are required, and take longer to resolve, the longer you wait. 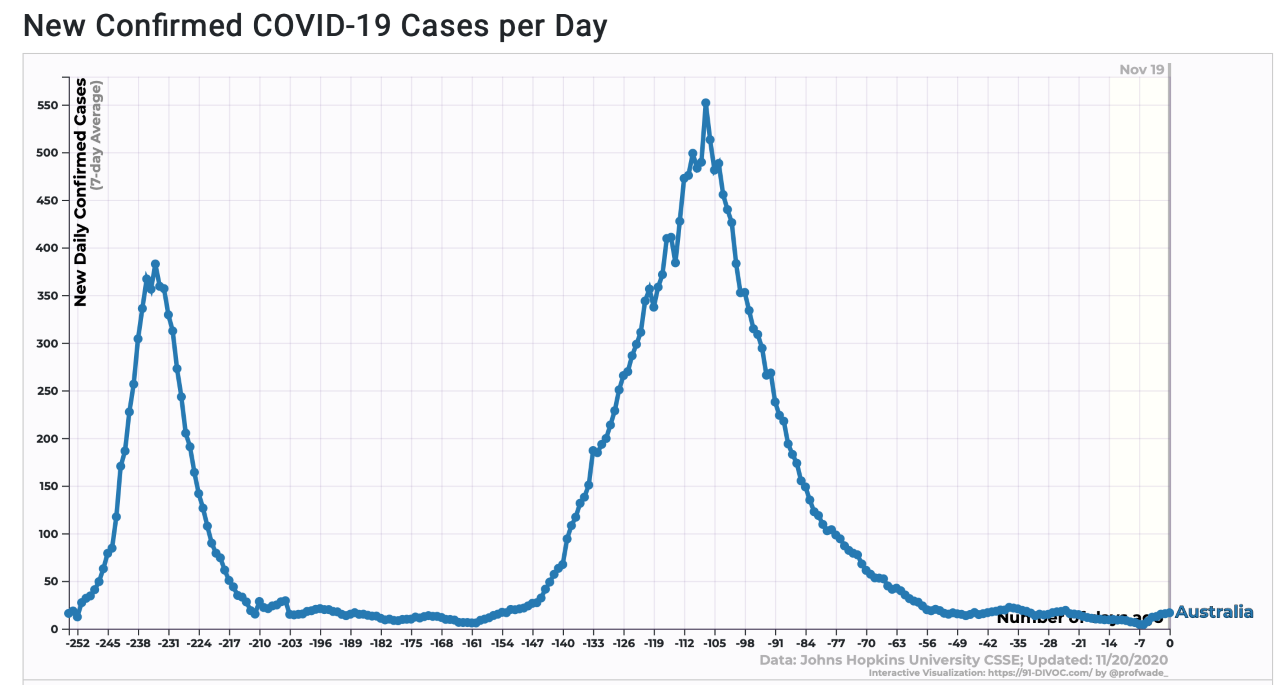 Other lockdowns, in calendar order: Wuhan, Bergamo, Korea, Iceland, Australia, New Zealand, Taiwan (after their outbreak) and as noted, Belgium.

Yes, multi-factor, but all around strict lockdowns. Others were leakier and slower, but still worked as long as they were maintained.

The claim about not observing best practices is pernicious nonsense. The data says what it says. Best practice is to focus on the data, not spurious arguments from authority based on editorial standards (themselves subject to conflict).