Lambert here: Readers may enjoy this article, but not, perhaps, for reasons the authors would have imagined….

Recent analyses suggest that pain is on the rise among working age adults in the US. Like many public health challenges, the burden of pain is unequal. This column explores why knee pain – the top joint problem in the US – differs by education. It finds that physical demands on the job and obesity each explain about one-third of the education gradient in knee pain and that there is an interaction between the two, with physical requirements on the job associated with knee pain primarily in those who are obese.

With a COVID vaccine on the horizon, what is the greatest public health challenge facing the US? The surprising answer, by many metrics, is pain. Chronic pain is one of the most frequent reasons adults seek medical care: it restricts mobility and daily activity, contributes to anxiety, depression, and dependence on opioids, increases disability, and costs over $500 billion annually in medical care costs and reduced productivity (Institute of Medicine 2011). And with half of adults reporting that they suffer from a musculoskeletal condition, chronic pain is among the most common medical conditions. Recent analyses suggest that pain is on the rise among working age adults in the US (Case et al. 2020). Like many public health challenges, the burden of pain is unequal – those with fewer years of education report more pain.

We set out to understand the experience of pain by education focusing on one important example, knee pain. We chose knee pain because of its leading role in disability – it is the top joint problem for Americans – and because clinical measures of knee anatomy permit one to measure the degree of physical injury quite well.

For people at every education level, musculoskeletal impairments stand out as the most common cause of functional limitations, such as the inability to walk a quarter mile, climb stairs, lift heavy objects, stand or sit for two hours, stoop or bend, reach, or socialise. Nearly two-thirds of people reporting such limitations in a national survey of US adults, the National Health Interview Survey, reported musculoskeletal problems as the cause. The burden caused by musculoskeletal impairments results in more claims for Social Security Disability Insurance in the US than any other health problem, accounting for 37% of new disability benefit recipients in 2018 (Social Security Administration 2019). Only mental illness comes close as a cause of disability insurance enrollment.

Nearly half of Americans (45%) in the National Health Interview Survey report that they had symptoms of joint pain, and among these adults, knees are by far the most common joint affected (62%). Figure 1 shows the percent of respondents reporting chronic knee pain (symptoms of pain, aching, or stiffness in the past 30 days that began at least three months prior) by age and education level. Two trends are notable. Even for young adults in their 30s, pain is less common comparing college graduates to those with fewer years of education. Second, while pain rises with age for all education groups, it rises more slowly among college graduates, with the greatest gap by education occurring at age 60 when roughly 30% of people in the bottom two education groups report chronic knee pain compared with 20% of college graduates.

With such large gaps by education and significant effects on function, medical costs, and productivity, it is important to understand why knee pain differs by education. In a recent paper (Cutler et al. 2020), we set out to do that. 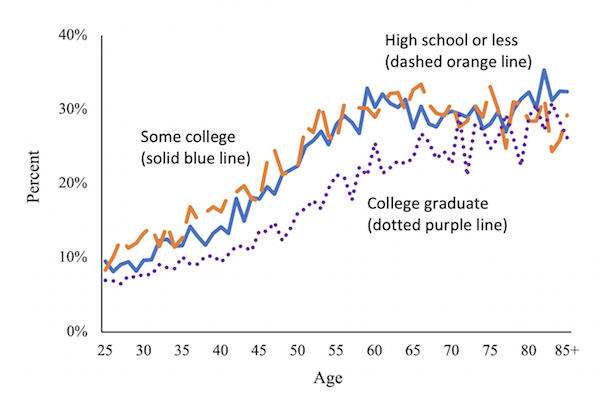 Physical Differences in Arthritis by Education

We began by examining whether damage to the knee is greater among people with fewer years of education. The most common cause of knee pain in older adults is arthritis, a condition whose severity can be measured by x-ray. Radiologists look for space between bones, bone spurs, sclerosis (hardening or thickening of bone), and loose bodies in the knee. We examined medical professionals’ reports on knee x-rays of older Americans participating in National Health and Nutrition Examination Surveys (NHANES), a series of studies which combine interviews with physical examinations. In the NHANES, there was remarkably little difference by education in the percent of x-rays suggesting arthritis (Figure 2). The difference in knee pain by education is a result of the fact that at every level of knee arthritis – including none – people completing fewer years of education report more knee pain. We relied on data from the OsteoArthritis Initiative, a longitudinal sample of about 5,000 people with or at risk of severe arthritis and pain. Two-thirds of the educational gaps in pain remained even after controlling for additional measures of knee damage beyond x-rays, including MRI-identified cartilage damage, meniscal tears, and bone marrow lesions, and reports of crepitis (creaking).

Figure 2 Severity of knee arthritis and pain conditional on arthritis

a) Population distribution by x-ray findings 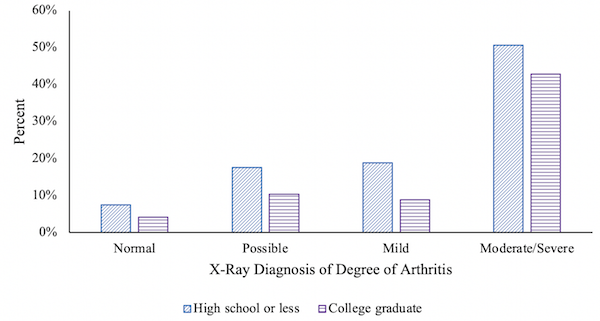 Note: Data are from the second phase of NHANES III, 1992-94, and are weighted to be representative of the US population. The sample is people aged 60-74 with both reports of knee pain and x-ray readings. Each observation is a knee.

Excess Weight and Physical Demands on the Job

Although the gaps in the rate of knee pain by education are not explained by differences in arthritis damage, at any given level of arthritis the load placed on a knee joint could differ by education. Two phenomena that are more common in adults with fewer years of education, excess weight and repetitive stressful motion, could increase the load placed on a joint (Okifuji and Hare 2015, Vignon et al. 2006, Sokolove and Lepus 2013). Figure 3 shows how reports of pain compare with measures of a person’s highest reported body mass index (BMI – a measure of obesity based on weight and height), and compared with an index of the physical demands of their job. Reports of knee pain rise in lock step with body mass, and pain also increases with the physical demands of one’s longest occupation. After controlling for obesity (at maximum BMI) and the physical demands of one’s longest-held job, the remaining gap in knee pain by education is only 30% as large.

(a) BMI at maximum weight 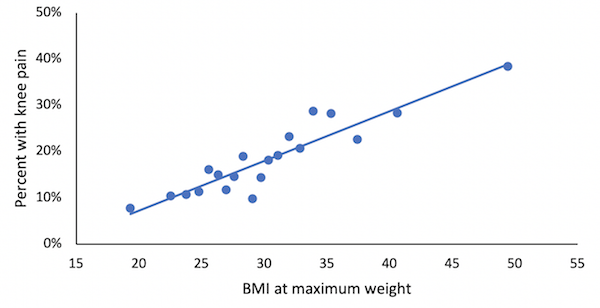 (b) Physical requirements on longest job 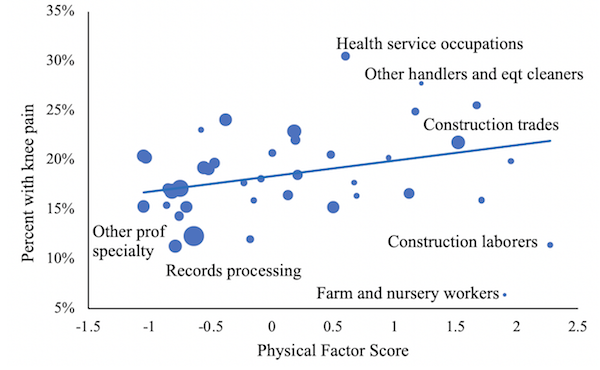 These remaining differences in pain could have a psychological as opposed to physical basis. For example, the same neurotransmitters in our brains influence both pain and mood (Marsala et al. 2015). Thus, it is possible for symptoms of depression to affect our experience of pain. Experimental evidence lends support to this notion, since people with depressed mood report more pain in response to the same stimuli (Nakao and Barsky 2007). We estimated how reports of pain differed by education controlling for measures of obesity, physical demands on the job, and several domains of psychological wellbeing including life satisfaction, positive and negative affect, sense of control, and psychological wellbeing. Though measures of depression were lower and psychological factors were more positive among people with more years of education, psychological variables had little relationship to knee pain.

Of course, people with less education are less likely to have health insurance and have less contact with the medical system when they do. Thus, treatment for pain may be less helpful in reducing pain. Upon reaching age 65, the age of eligibility for Medicare benefits, the probability of having health insurance rises more than 10 percentage points for adults with a high school degree or less education, while no such change occurs for college graduates, virtually all of whom have insurance coverage before reaching age 65. So, if access to care is related to knee pain, one would expect a dramatic increase in arthritis-related doctor visits, medication, or joint-replacement surgery at this age. However, none of these healthcare outcomes changes much at age 65, suggesting there is little role for medical care as an explanation of differences in knee pain.

So, what does the evidence on knee pain by education suggest about the future? Based on forecasts of employment by the Bureau of Labor Statistics through 2026, work-related physical demands are expected to rise. This may surprise most readers, but it stems from the large projected growth in occupations like home health aides, personal care workers, janitors and cleaners, and construction laborers. Furthermore, employment in occupations with low physical demands, like secretaries, is expected to continue to decline. There are no forecasts for obesity, but against a backdrop of cheap (not necessarily nutritious) calories, obesity has been rising steadily in recent decades. In 1988-1994, the percent of adults age 45-74 obese at their maximum weight was 41%, but this figure has steadily risen (reaching 55% in 2015-16), and the prevalence of obesity continues to be higher among adults with fewer years of education. Meeting the challenge of the ongoing risk of obesity and physical demands that fall with unequal burden among those with lower education is among the most important medical and social goals for the post-COVID era.