Yves here. THE CITY has mentioned trained “violence interruptors” before in its articles; here, they appear as a key element in a police reform experiment. Notice that the intent was to remove cops as the primary means for monitoring and enforcing neighborhood safety; people who were closer to the community served as the main eyes and ears, with the police at a remove but ready to step in. Although five days in one district is too limited a trial to declare victory, this test went well and strongly suggests that this approach merits more implementations and refinements.

As you’ll see from the article, some of the elements for success were situation-specific. The Brownsville area had a tense relationship with the police. NYPD moved one cop who’d roughed up some locals off the street and also replaced the precinct head with a an officer from the neighborhood. That commanding officer, Terrell Anderson, set out to rebuild relations with the community.

By Yoav Gonen and Eileen Grench. Originally published at THE CITY on January 3, 2021 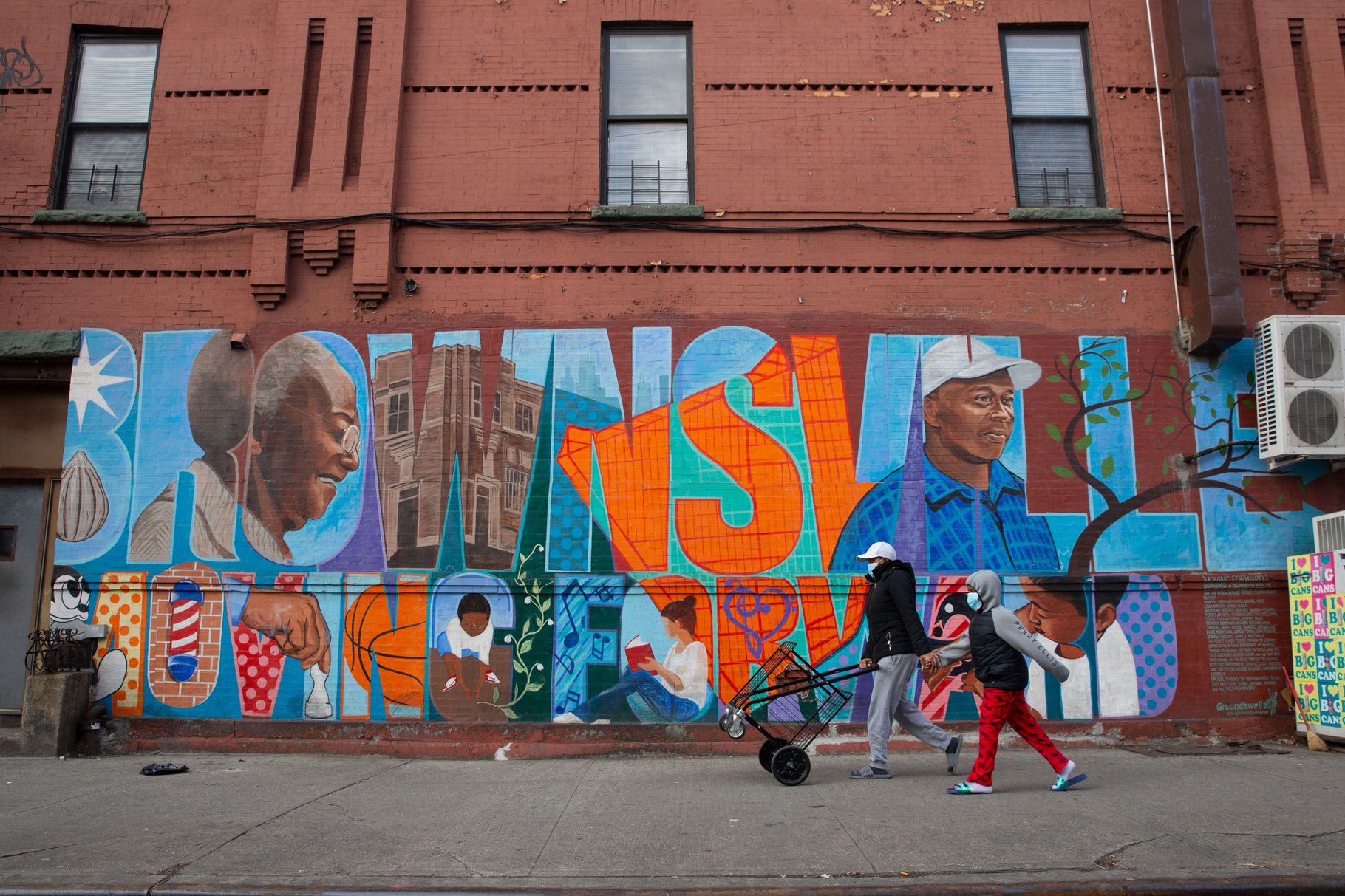 A Brooklyn community’s experiment to deal with a longstanding crime hotspot in a busy commercial corridor took a new approach last month: They pulled back on policing.

Cops from Brownsville’s 73rd Precinct withdrew from their regular posts on Mother Gaston Boulevard for parts of a five-day stretch in early December, while violence interrupter and crisis management groups watched over the two-block zone between Pitkin and Sutter avenues.

“This was ‘defund the police’ in actuality,” said Assemblymember Latrice Walker (D-Brooklyn), who grew up in the nearby Glenmore Plaza Houses.

The idea was for the groups, staffed largely by community members with prior involvement with the criminal justice system, to prevent minor incidents from escalating into violence or other crime.

Meanwhile, city agencies and nonprofits set up tents along the strip — surrounded by one of the city’s highest concentrations of public housing — to offer information on education, job and housing opportunities, as well as other services.

Only one 911 call, from a bus driver who mistakenly activated a distress signal, was reported during the pilot, police told community groups during a recent video conference.

And while the Brownsville Safety Alliance experiment was limited — covering just 50 daytime and evening hours during a cold week in the middle of a pandemic — elected officials and community leaders said it marked a significant step toward reimagining public safety.

The Brownsville Safety Alliance pilot was a huge success. This combination of community based organizations and city agencies will set a tone for the future as we embrace reform and reimagining public safety. Thank you to all the partners! You made this happen. We are listening. pic.twitter.com/v53LVIpsoP

Walker, who noted that cops were stationed nearby and available to respond as needed, said the pilot indicated that a visible police presence isn’t essential to keeping the peace.

“For the first time in a long time,” she said, “the block felt safe.”

Pilot participants and local leaders gave much of the credit to one person: Deputy Inspector Terrell Anderson, the newest commanding officer of the 73rd Precinct, who grew up in the neighborhood.

Police Commissioner Dermot Shea appointed Anderson to the position in June after the reassignment of his predecessor, Deputy Inspector Craig Edelman.

Edelman had become a subject of public backlash after a viral video showed him looking on as one of his officers, Vincent D’Andraia, allegedly threw a young woman to the curb during the summer’s anti-police brutality protests.

D’Andraia was temporarily suspended, pending a criminal case and ahead of a civil lawsuit recently filed by protester Dounya Zayer, who said she’s grappling with ongoing injuries from the encounter.

After the incident, NYPD brass transferred Edelman to a leadership role with a citywide gun violence suppression unit.

THE CITY later reported that Edelman and D’Andraia had been criticized for allegedly aggressive policing tactics in Brownsville long before the high-profile encounter — an approach that raised tensions between the NYPD and local residents.

Multiple community leaders referred to the police posts throughout the neighborhood at the time — including on Mother Gaston Boulevard between Belmont and Sutter avenues — as an “occupation.”

And despite the heavy police presence, drugs, violence and crime persisted on the commercial corridor, they said.

They also pointed to the police killing of Kwesi Ashun, who had schizophrenia, at a nail salon on Mother Gaston Boulevard in October 2019.

‘A Model for the Future’

The appointment of Anderson offered a chance for the community-police relationship to reset, elected officials said.

At a recent Zoom meeting about the project, Anderson showed up dressed in civilian clothes, which he described as a purposeful effort to emphasize that the pilot was a collaborative effort rather than something dictated by an authority figure in uniform.

He also spoke only briefly and kept most of the conversation open for feedback.

“Together we can come up with the right answer when we work as a collective,” she said, adding that she believes public safety should be led by community members. 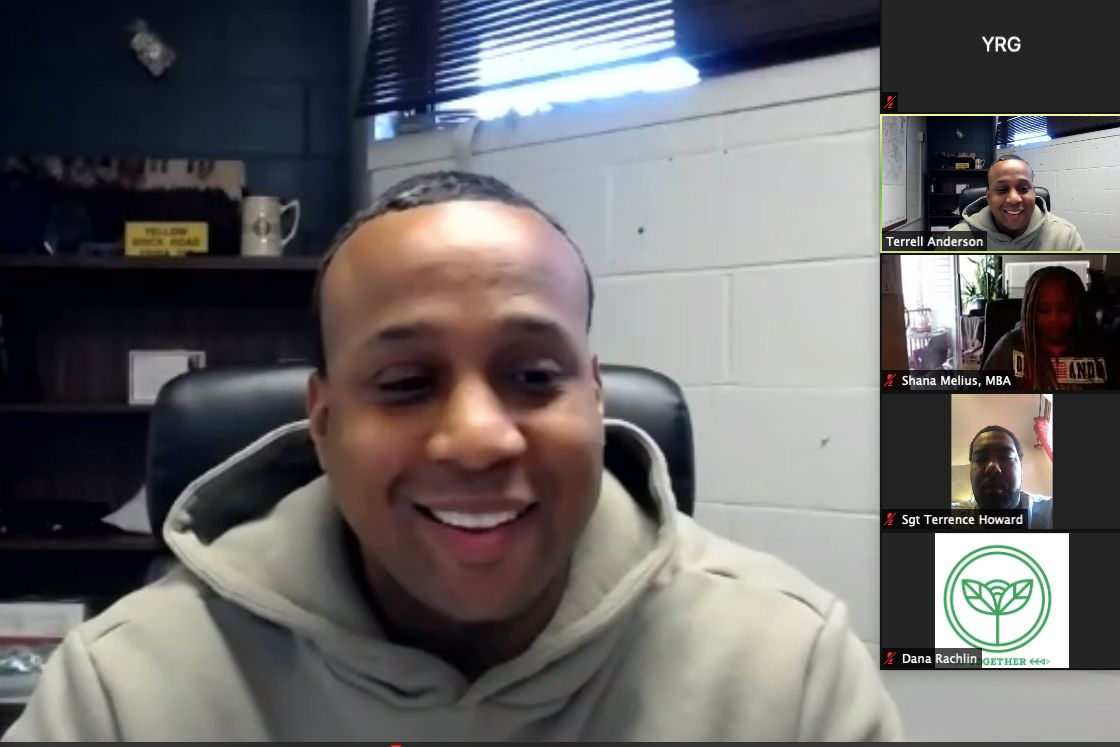 Anderson referred a request for an interview to the NYPD’s press department. Officials there asked for a list of questions, which THE CITY provided, before denying the request.

During the video conference, Anderson spoke highly of the pilot — and said he wanted to try it again in the warmer months.

“I’m learning through working with the different organizations how to be a better commanding officer and how to help my cops be better police officers as we move toward a future of reimagining public safety,” he said, according to a recording of the meeting. “But what was displayed was amazing — I think it’s going to be a model for the future.”

Mother Gaston Boulevard is a main artery and economic center for residents of the surrounding neighborhood, which includes seven public housing developments.

A laundromat, supermarket, pharmacy, multiple hair and nail salons and barbershops, two liquor stores and a handful of restaurants line the boulevard. Several drug treatment facilities are nearby.

Like other precincts in the city, Brownsville struggled with spikes in some serious crimes during the pandemic year of 2020 — including murders, which stood at 25 as of last week, compared to 11 in 2019.

On Tuesday, cops in the neighborhood shot and killed a man who allegedly attacked a woman and her dog with a machete.

Still, reported rapes, robberies and grand larcenies were down in 2020 as of last week, compared to the previous year, according to NYPD data posted online.

Ndeye Thian, who opened the Aida African Hair Braiding Salon in February — one month before being temporarily shuttered by the coronavirus crisis — said she feels safer doing business on Mother Gaston Boulevard with the police in sight.

But she also said she understood frustrations over the historically heavy police presence.

“People need jobs,” said Thian. “If you don’t have a job, you’re not happy. If I open this store and make my dollar, I’m happy. We don’t need the police to watch us all the time.” 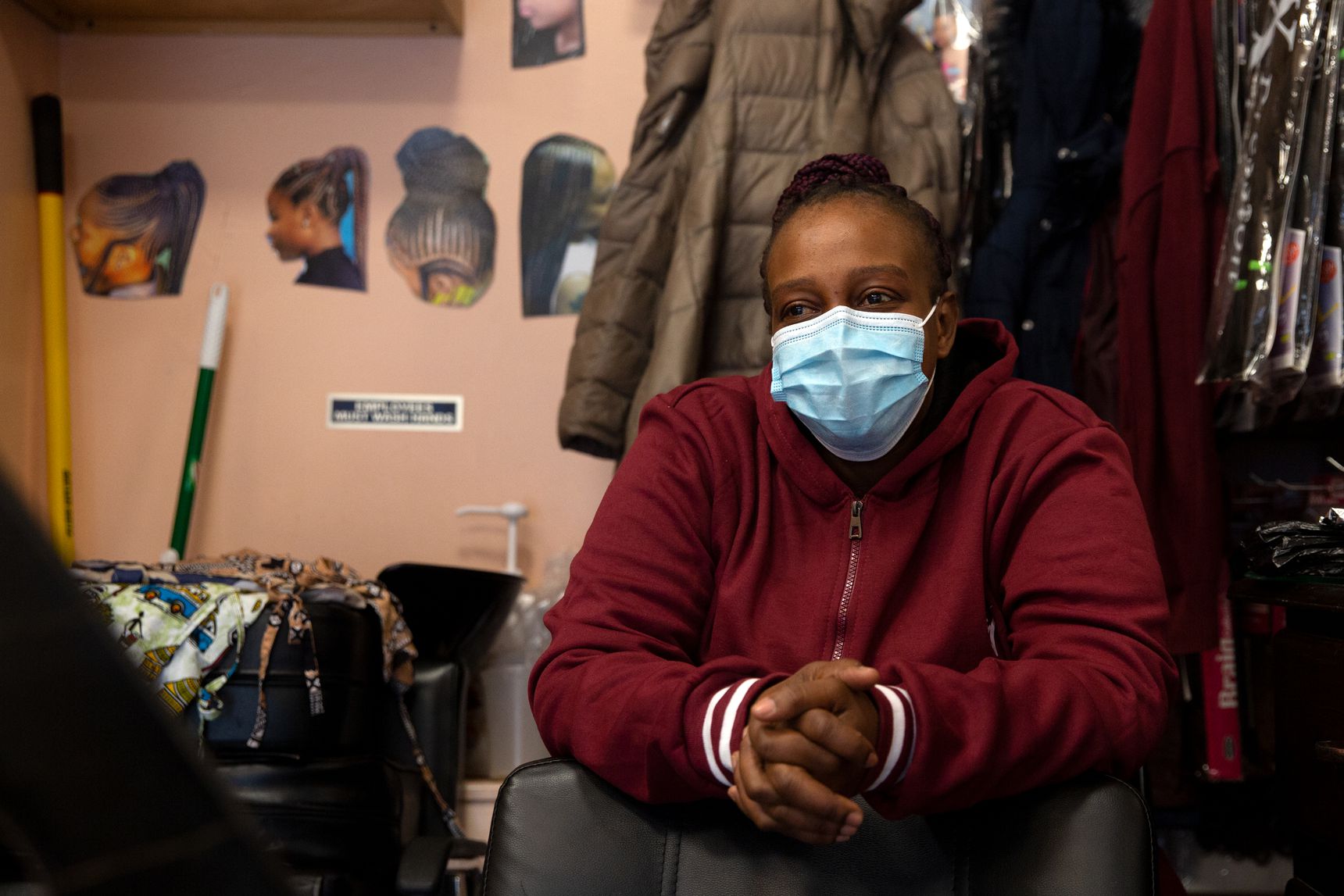 Her employee, Fatima Touré, said she took advantage of the resources offered during the pilot program to find homework help for her son at a table run by the city Administration for Children’s Services.

“It make[s] a difference because I think these people here, the mentality, maybe [if] they see those people help them more… they think people care about them more,” she said.

“If there’s not police on the block, I can’t open the store,” said Smillie, a 68-year-old part-time musician who has operated Brownsville Bike Shop for 37 years.

The Jamaican immigrant said he wasn’t aware of the pilot program — in part because he’s focused on the bottom line.

“I’m on the verge of going out of business,” he said.

Policing experts said it was difficult to say how meaningful a shift the Brownsville Safety Alliance pilot represents.

“You can withdraw patrol policing from a couple of blocks, but that doesn’t mean the police have disappeared,” said Jerry Ratcliffe, a professor of criminal justice at Temple University in Philadelphia. “They’re still pretty much seconds away if anybody calls and they’re very likely patrolling the areas that people [use] to get to those two blocks.”

Jeffrey Butts, who has done extensive research on cure-violence initiatives, also questioned how far the experiment could go.

“It’s radical messaging. Because, in retrospect, they’re saying, ‘Hey, look, we had no patrol activity in this area all this time, and nothing bad happened,’” said Butts, director of the Research and Evaluation Center at CUNY’s John Jay College of Criminal Justice.

“But that’s different than saying, ‘That’s our strategy from now on,” he added. “And you would not say that, because you don’t want to communicate to the community that we’re no longer protected by law enforcement.” 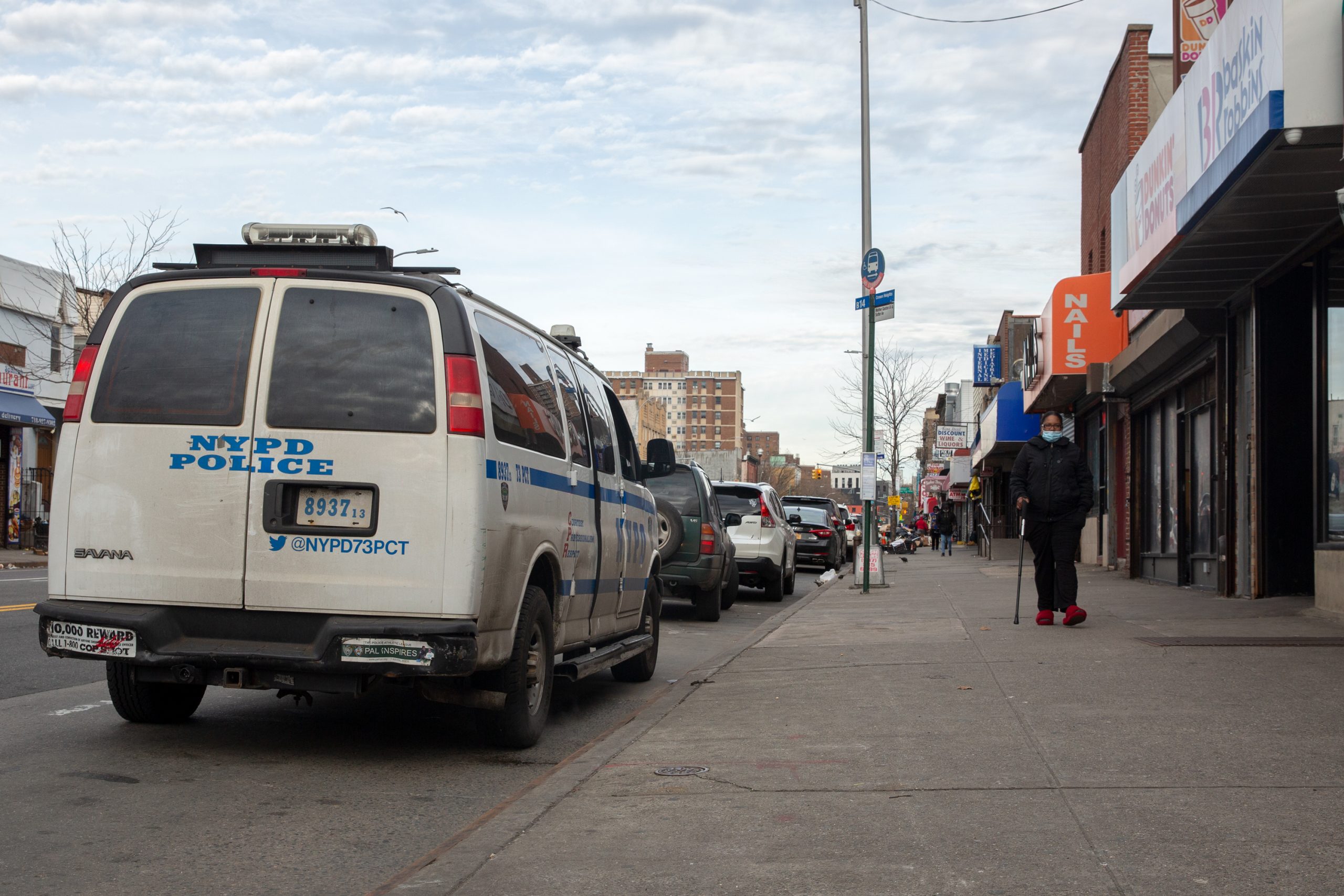 Anthony Newerls, the program manager for Brownsville In Violence Out (BIVO), the main cure-violence group in the pilot program, noted choices aren’t limited to traditional policing versus nonprofit anti-violence groups.

“That just shows that the partnership could be very significant if we have community-based organizations, that know the community and know the people, that certain things can get done and we can quote-unquote ‘police ourselves,’” said Newerls. “I think the partnership is what makes the system work. I don’t think you can have one without the other.”