Yves here. Yet another confirmation of FBI and police interference in domestic politics, this the shameful assassination of Malcolm X. Not surprisingly, this account hasn’t gotten the attention it warrants. 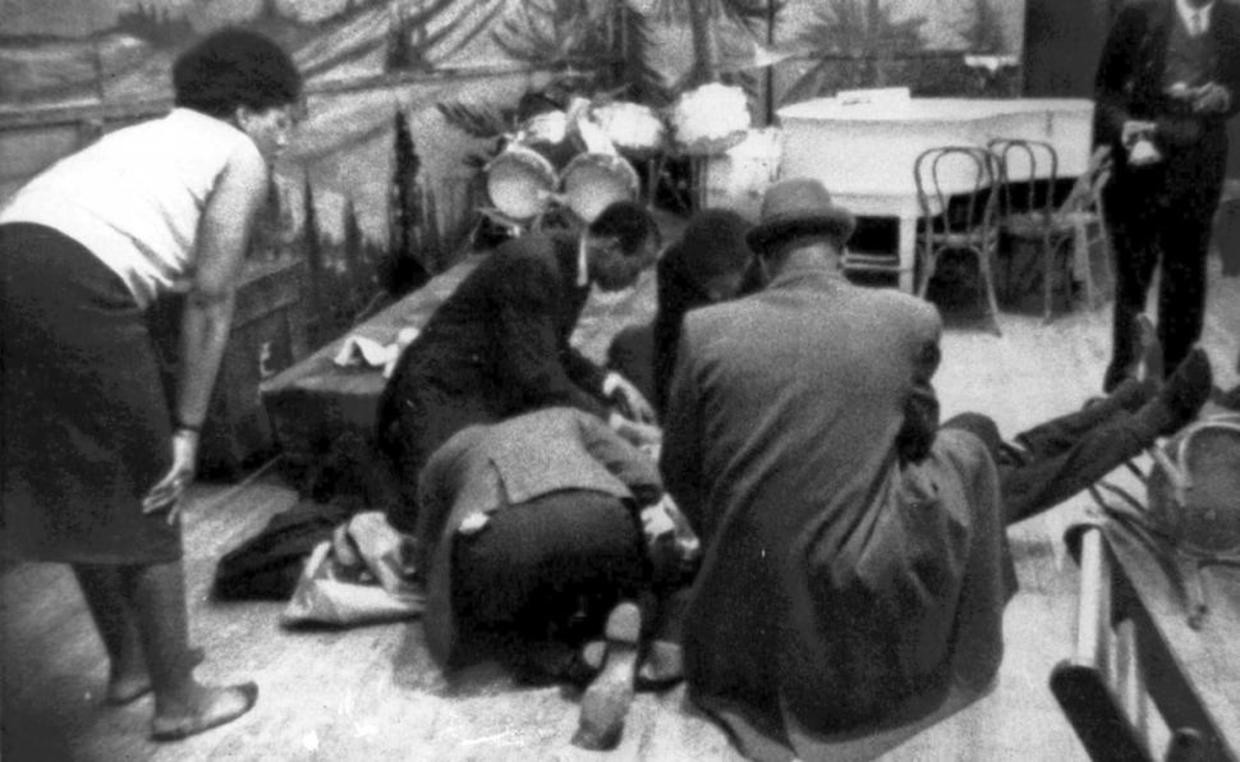 Followers tend to Malcolm X as he lies mortally wounded on the stage of the Audubon Ballroom in New York City, February 21, 1965. Malcom X was shot 15 times at point blank range.

A half-century after the death of Civil Right activist Malcolm X, lawyers revealed new evidence of NYPD and FBI involvement in his assassination.

The Manhattan District Attorney’s office, which had earlier re-opened the investigation in response to a Netflix documentary, said that “the review of this matter is active and ongoing.”

The new evidence comes by way of a deathbed confession by a former NYPD policeman who gave a letter to his family saying that he, the FBI and the NYPD were responsible for the assassination. His role, he claimed, was to make sure that Malcolm X’s security detail was previously arrested so that there would be no door security at the ballroom where the civil rights activist was speaking the night he was murdered.

Members of Malcolm X’s family have made public what they described as a letter written by a deceased police officer stating that the New York Police Department and FBI were behind the 1965 killing of the famed Black activist and civil rights advocate.

Raymond Wood’s letter stated that he had been pressured by his NYPD supervisors to lure two members of Malcolm X’s security detail into committing crimes that resulted in their arrest just days before the fatal shooting. Those arrests kept the two men from managing door security at the ballroom and was part of conspiracy between the NYPD and FBI to have Malcolm killed, according to the letter.

“Under the direction of my handlers, I was told to encourage leaders and members of the civil rights groups to commit felonious acts,” Wood’s letter stated.

“What Everyone Knows to Be True” Is a Lie

What emerges from this revelation and those in the Netflix documentary is the clear possibility that the FBI and NYPD masterminded the assassination ultimately carried out by Malcolm X’s enemies in the Nation of Islam, from which he had recently broken.

In other words, “what everyone knows to be true” — that Malcolm X was killed as a result of a feud with the Nation of Islam — is a lie.

Here’s the “official” version of the murder, courtesy of Wikipedia:

On February 19, 1965, Malcolm X told interviewer Gordon Parks that the Nation of Islam was actively trying to kill him. On February 21, 1965, he was preparing to address the OAAU in Manhattan’s Audubon Ballroom when someone in the 400-person audience yelled, “Nigger! Get your hand outta my pocket!”[189][190][191] As Malcolm X and his bodyguards tried to quell the disturbance,[N] a man rushed forward and shot him once in the chest with a sawed-off shotgun[192][193] and two other men charged the stage firing semi-automatic handguns.[190] Malcolm X was pronounced dead at 3:30 pm, shortly after arriving at Columbia Presbyterian Hospital.[191] The autopsy identified 21 gunshot wounds to the chest, left shoulder, arms and legs, including ten buckshot wounds from the initial shotgun blast.[194]

One gunman, Nation of Islam member Talmadge Hayer (also known as Thomas Hagan), was beaten by the crowd before police arrived.[195][196] Witnesses identified the other gunmen as Nation members Norman 3X Butler and Thomas 15X Johnson.[197] All three were convicted of murder in March 1966 and sentenced to life in prison.[198][199] At trial Hayer confessed, but refused to identify the other assailants except to assert that they were not Butler and Johnson.[200] In 1977 and 1978, he signed affidavits reasserting Butler’s and Johnson’s innocence, naming four other Nation members of Newark’s Mosque No. 25 as participants in the murder or its planning.[201][202][203][204] These affidavits did not result in the case being reopened. In 2020, the Netflix docuseries Who Killed Malcolm X? explored the assassination, which launched a new review of the murder by the office of the Manhattan District Attorney.[205]

And here’s what’s been added by the deathbed confession, courtesy of WABC in New York:

WASHINGTON HEIGHTS, Manhattan (WABC) — Fifty-six years after the death of Malcolm X, lawyers revealed what they called new evidence of a conspiracy, perpetrated by the NYPD and the FBI to assassinate the Civil Rights activist in Harlem.

Ray Wood was an undercover [NYPD] police officer at the time – his family and their attorney now claim Wood wrote a letter on his deathbed confessing the NYPD and the FBI conspired to kill the Civil Rights activist….

Wood’s family says in the letter that Wood wrote, he stated his responsibility was to ensure Malcolm X’s security detail was arrested days before the assassination.

The letter further states this move would guarantee Malcolm X not having door security at the Audubon Ballroom where he was killed….

Three Nation of Islam members were convicted in Malcolm X’s murder. Last year the Manhattan DA began a review of those convictions after meeting with representatives of the Innocence Project

Now, with the new evidence, the DA’s office says “the review of this matter is active and ongoing.”

Again, according to the Reuters report, the letter has since been released to the public.

First, it’s no secret that American security agencies like the CIA use non-CIA assets — in those days, often virulently anti-Castro Cuba expatriates — to carry out their operations. You can see echoes of this practice in the profile of the Watergate burglars.

Gordon Liddy (ex-FBI) and Howard Hunt (ex-CIA with a specialty in “regime change in Latin America”) were the planning team for Nixon’s “plumbers” operation, which, among other activities, carried out the Watergate break-in itself.

Directly involved in the break-in — the “boots on the ground” — were James McCord (ex-CIA), Frank Sturgis (ex-CIA and a undercover anti-Castro Cuban operative), Virgilio Gonzáles (Cuban-born “political activist”), Eugenio Martínez (a “member of the anti-Castro movement”) and Bernard Barker (an “undercover operative in CIA-directed plots to overthrow” Castro).

It would make perfect sense if the FBI and NYPD used Malcolm X’s political enemies to carry out the assassination-by-proxy of a man whom then-FBI director J. Edgar Hoover feared and hated.

I have to say, a deathbed confession attested to by so many people seems compelling evidence of their involvement.

Second, do you trust the Manhattan District Attorney to act against the interests of the NYPD in this case? The proper outcome would be murder indictments, even against the dead, and a conspiracy investigation, a “truth commission” if you will.

What are the odds of that happening? I’m surprised the case has gotten even this much coverage, which is very little. If you watch Chris Hayes (MSNBC) or Chris Cuomo (CNN) for coverage this week, I’ll bet you’ll watch in vain. My guess is, this is the first and only place you’ll read about it.

Finally, the 1960s were a time of widespread anti-Establishment rebellion. What are the implications of this revelation for the rebellious phase we’re obviously entering now?

American security state freely commits murder, even of American citizens, in every other country of the world. Why would it stop at murder in our own if it hasn’t in the past?

(I’ve launched a Substack site to greet the post-Trump era. You can get more information here and here. If you decide to sign up — it’s free — my thanks to you!)