Apologies for the dearth of original posts. Three got delayed for different reasons. Hopefully this big ration of links will partially compensate.

Fully vaccinated people can skip Covid quarantines, CDC says CNN (Kevin W). Kill me now. First, vaccines only 90% effective, and that assumes proper spacing of shots and handling. Already cases of people getting full blown Covid after 2 vaccines. And more important, as we have said repeatedly, we don’t know if these vaccines reduce transmission. They likely do to a degree, but the overwhelming majority of experts agree that a respiratory vaccine is exceedingly unlikely to achieve sterilizing immunity.

WHO expert group recommends use of AstraZeneca vaccine (Kevin W)

COVID maths: All the virus in the world would fit in a coke can Reuters

Covid vaccine: J&J CEO says people may get annual shots for the next several years CNBC

US will not accept World Health Organization findings out of Wuhan without independently verifying South China Morning Post (resilc). Help me.

Biden Administration Says Schools Have Reopened If They Are Open One Day a Week Wall Street Journal. Moving the goalposts is not going to impress parents who have to mind their children during what used to be the school week.

President Biden Meeting with Business Leaders on COVID-19 Relief C-SPAN. So they get relief. Ordinary people get “stimulus” as in they deserve help only as economic cannon fodder.

Trailer shortage fears as EU drivers question the viability of serving the UK The Loadstar (guurst). Consistent with what we said a while back. If shipping disruption continued, rates would have to rise high enough for haulers to feel it was worth their while.

It is time to wonder: is the EU–UK Trade and Cooperation Agreement (TCA), as drafted, actually going to be ratified? Euroblog (guurst_

Really interesting thread from Taylor about my contempt of court case. One thing it has undoubtedly shown is the complete lack of journalists in the UK MSM capable of writing something like this simple thread. https://t.co/FX6kXnS8eY

#Lula | "Brazil's Supreme Court decided today that former president Lula's defense team has the right to all of the leaked messages from the members of the defunct Car Wash Operation and former judge Sergio Moro, who convicted Lula and removed him from the presidential race." https://t.co/y6OL6BXb7y

India Will Drive Energy Demand For The Next 20 Years OilPrice

‘Made for TV,’ and where it got us Columbia Journalism Review

The House case today has resonated with many of us who remain angry over this attack on our Capitol. However, it is more emotive than probative. It is like showing the remnants of a fire. That does not materially show that the accused is guilty of the arson.

Trump is on trial for inciting an insurrection. What about the 12 people who spoke before him? Politico

Trump’s impeachment can answer a lot about the Capitol riot. But not who funded it. NBC (dk). Gah. Lambert made some back of envelope computation. It took very little dough to get the relatively small number (by historical DC demonstration standards) who traveled there transit costs and maybe a night or two of hotel/AirBnB.

Sanders confronts Tanden over past ‘vicious attacks’ The Hill

California Twentynine Palms: Explosives are missing from the nation’s largest Marine Corps base and an investigation is underway CNN

Twitter faces a political disaster in India, where it’s taking heat from both the government and protesters over the suspension of accounts Business Insider (Kevin W)

This was on the back of the hubris that LG Chocolate was the world-beating phone. But of course, the first iPhone debuted in 2007 right after Chocolate and changed the cell phone world forever. LG tried to switch gears, but it was too late – it lost out to Apple and Samsung.

Thieves Nationwide Are Slithering Under Cars, Swiping Catalytic Converters New York Times (David L). Surprised this is happening only now. They have platinum in them.

No more putting it off.

What Collapsed the Middle Class? Of Two Minds (UserFriendly)

All dressed up for Saturday Night. He was born in Asheville NC 9 years ago, and he’s got some bobcat in him. He was kind enough to pose before an Etruscan bowl reproduction. Flattering, I think. 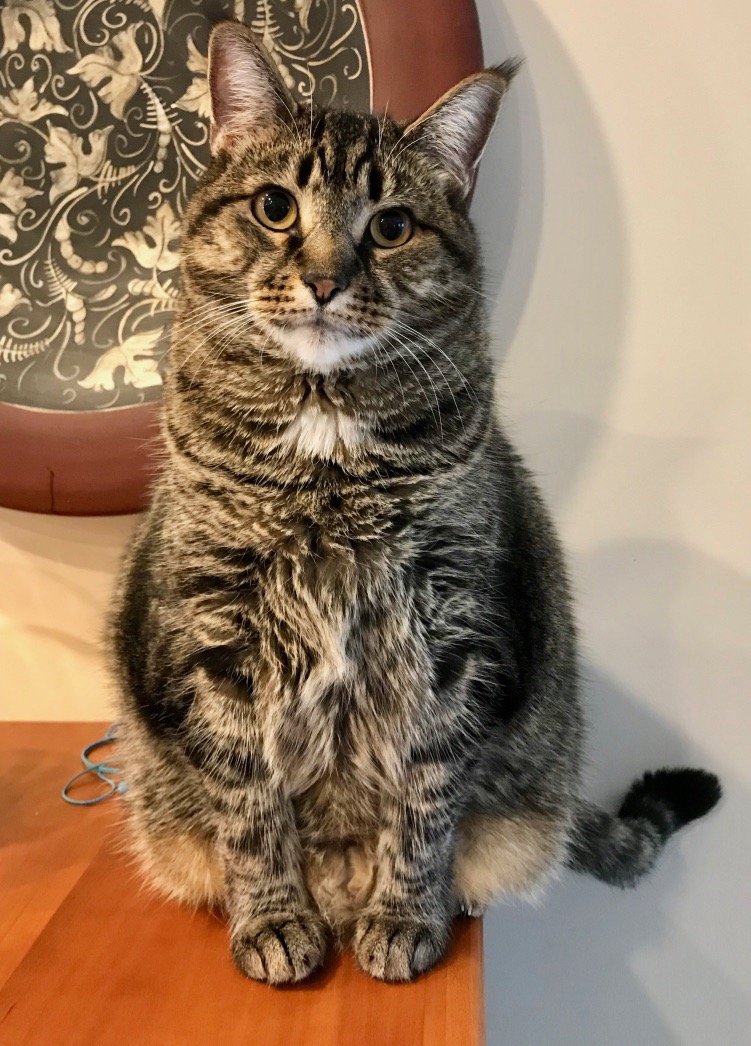 And a bonus (guurst). Must be from NYC: