Happy Groundhog Day! Are you snowed in?

Travel Photographer of the Year 2020 – in pictures Guardian

The More We Learn About Crow Brains, the More Humanlike Their Intelligence Seems Discover (David L)

Inevitable Planetary Doom Has Been Exaggerated Atlantic (resilc). Not sure anyone has suggested “planetary doom” although there was a ~300 million bad stretch after ~96% of life on the planet died. It’s civilization and present human population levels that are at risk. Plus hope isn’t a great motive for action. You can, for instance, just hope the forecasts are wrong, which is what most people seem to be doing. I am really tired of hopium. Fear is more effective.

It is outrageous that I can point to gobs of people in my field working on synthetic biology, “AI,” self-driving cars, and blockchain but not a single person researching septic tanks, mobile homes, trailer parks, or even housing more generally, even though these latter topics are full of technological issues and true human suffering that IS HAPPENING RIGHT NOW.

Thrown in twitter jail for being an artist pic.twitter.com/KzCTOZBRin

Line cooks are at the highest risk of dying from COVID, says UCSF study SFGate

80% of COVID-19 Patients May Have Lingering Symptoms, Signs MedPage

2) Moreover, they believe the 11 samples of #b117 variant that acquired the new E484K acquired them independently of each other (not just one single origin). This suggests convergent evolution taking place—where it evolves to acquire E484K separately—which indicates it is key. pic.twitter.com/RuIDxaRnni

Molecular Docking Identification for the efficacy of Some Zinc Complexes with Chloroquine and Hydroxychloroquine against Main Protease of COVID-19 Journal of Molecular Structures. This is the medical analogue to an economics theory paper. Provides a mechanism but still needs to be proven out in patients. And the search for treatments appears to have moved on. Ivermectin looking better than HCQ.

Why the Second Wave of the 1918 Flu Pandemic Was So Deadly History (Chuck L). From December, still germane.

The fact that that decision – to go for a hard Brexit – could be taken in that way, with no consultation, discussion, or even letting her own Chancellor know – is an extraordinary indictment of our constitutional arrangements. https://t.co/xpikpjO5Cq

Myanmar coup: Aung San Suu Kyi detained as military seizes control BBC. Resilc: “A year ago they were going to yank her Nobel Peace Prize for killing Muslims, now she is a beacon of democracy.”

Dubai creates ‘space court’ for out-of-this-world disputes The Times of Israel. Kevin W: “But if Dubai builds it, will litigants come?”

The Longer Telegram’ Is a Recipe for Costly Failure American Conservative

AOC hiding in her office during the insurrection. YouTube (UserFriendly). The full version is apparently annoying due to the excessive commentary.

White House Reporters: Biden Team Wanted Our Questions in Advance Daily Beast (furzy). Doing this from the Wayback Machine, as Furzy did, because Daily Beast has the WORST site imaginable. Unreadable and almost impossible to navigate.

Everything About The Biden Administration Is Fake Caitlin Johnstone (furzy)

Biden Wants the Government to Run on EVs. It Won’t Be Easy Wired

Robinhood was asked for $3 billion to cover the risk from the volatility in GameStop and other ‘meme-stocks,’ CEO Vlad Tenev told Elon Musk Business Insider

The GameStop saga is already headed to Hollywood Quartz (resilc)

Via Goldman Sachs: Last week was the largest active hedge fund deleveraging event since February 2009, with long positions sold and shorts covered in every sector.

THREAD: With #silversqueeze trending on Twitter, it appears that this week's market spectacle may well be in the silver market.

A perfect moment for a thread on the Hunt Brothers and their alleged attempt to corner the silver market… pic.twitter.com/nfgo9Ps9hD

The Future of Macroeconomics Institute for New Economic Thinking

Millennials are not only buying homes, they’re buying multimillion-dollar ‘starter’ homes — and it defies 2 common myths about the generation at once Business Insider

Antidote du jour. Normally I don’t deviate this far from our cute animal picture formula, but I liked this woodblock print sent by William B. Plus you have the panda snow vids and some great animal pix in the travel photo award winners at the top of Links if you need a bigger fix. 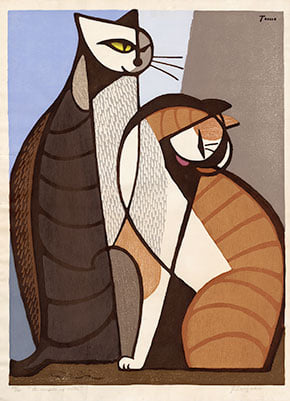