Yves here. Lack of social cohesion and trust wasn’t high in most advanced economies even before Covid, thanks to rising income inequality. Covid deepened existing fissures between the “freedom” types and most business owners versus those who preferred a vigorous government response, including restrictions on activity. At least in the West, the often less than stellar management of this public health crisis gave critics of intervention talking points. But the flip side is Asian countries, which generally had had experience with SARS, have suffered less damage to their economies and normalcy by taking aggressive action early on, which allowed them to be more selective about ongoing restrictions.

And it’s not as if high levels of social trust was key to greater success in Asian nations. For instance, readers have said South Koreans don’t have all that much faith in their government….but public health is an exception.

The story above is familiar. But it’s still worth cycling back to Sweden, which was touted early on as correctly staring down health risks to save their economy. It turned out, as this site and many others anticipated, the Swedish response was a lose-lose: markedly higher death rates than their low population density neighbors, yet similar damage to the economy as the rest of Europe. That confirms our oft-repeated point that the damage to commerce comes from consumers curtailing and modifying their activities, which they do even if there are no lockdowns. For instance, Google tracking of personal movements found it contracted in the various US states a week to ten days before officials imposed “shelter in place” type rules.

And since the odds of drive-by Sweden-failure-denialists trying to thought police in comments are high, we feel compelled to provide a few details. From The Lancet at the end of December:

In the second wave of the COVID-19 pandemic, the Swedish national response continues to be an outlier with cases and deaths increasing more rapidly than in its Nordic neighbours. On Dec 20, 2020, COVID-19 deaths in Sweden had reached more than 80003 or 787 deaths per 1 million population, which is 4·5 to ten times higher than its neighbours. This difference between Nordic countries cannot be explained merely by variations in national cultures, histories, population sizes and densities, immigration patterns, the routes by which the virus was first introduced, or how cases and deaths are reported. Instead, the answers to this enigma are to be found in the Swedish national COVID-19 strategy, the assumptions on which it is based, and in the governance of the health system that has enabled the strategy to continue without major course corrections.

From the BBC in late December:

Sweden’s king has said his country “failed” to save lives with its relatively relaxed approach to the coronavirus pandemic….

“Of course the fact that so many have died can’t be considered as anything other than a failure,” Mr Lofven told reporters.

Now to the collateral damage.

By Irene Peroni, an Italian freelance journalist based in Oslo, Norway. She has worked for BBC Monitoring and BBC News Online in the past, and is currently collaborating with a few Italian and Swiss media outlets, including Swiss-Italian radio RSI. Originally published at openDemocracy 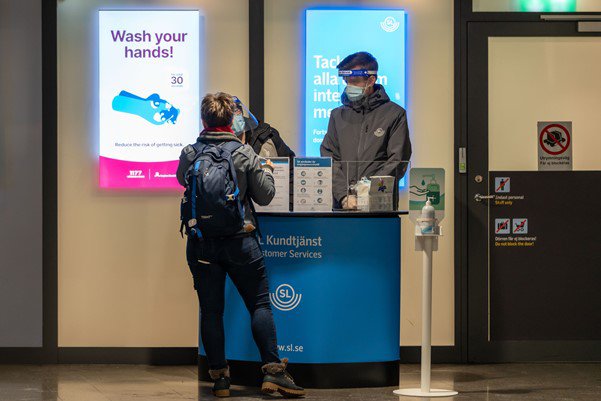 Sweden, a bastion of welfare and one of the countries that scores highest on pretty much anything to do with the wellbeing of its inhabitants, seems to have woken up to a serious identity crisis.The choice to adopt and follow a COVID-19 strategy unlike any other in Europe has recently led to an extreme polarization in an otherwise rather homogenous public debate.

Statistics prove beyond a shadow of doubt that the other Scandinavian countries, which enforced much stricter policies, have suffered considerably fewer losses.

Sweden’s state epidemiologist Anders Tegnell, who firmly opposed face masks and believed that measures should rely only on the Swedish people’s sense of personal responsibility, enjoyed overwhelming support in the early phases of the crisis.

Fan pages, mostly on Facebook, counted tens of thousands of members. His face featured on T-shirts, gadgets and even a tattoo, worn on the arm by one of his proudest admirers.

The alluring message that Sweden’s approach was right and everybody else’s self-isolation regime was hopelessly wrong reached well beyond the nation’s borders.

In other European countries, staunch critics of lockdowns pointed at footage of happy, bare-faced Swedes hanging out in crowded bars as evidence that the draconian measures imposed elsewhere were an unnecessary violation of civil rights.

The Swedish model became a symbol for anti-lockdown and no-mask movements across the world.

Beyond the ‘Opinion Corridor’

But now, one year after the first cases of COVID-19 were detected in Scandinavia, the situation has changed dramatically.

Tegnell himself is currently enduring massive criticism and even death threats.

In one instance, a citizen went so far as to argue that he should be “executed by a firing squad on live state television”.

And yet, despite the fact that both King Carl XVI Gustaf and prime minister Stefan Löfven in December publicly acknowledged that the Swedish approach had failed, Tegnell has never retracted anything, let alone made an official apology.

Until very recently, an astounding, near total lack of criticism, not only from public opinion but even from major opposition parties, characterised Sweden’s COVID. This might be due to the so-called åsiktskorridor (‘opinion corridor’).

This is a Swedish concept meaning that the public debate tends to take place within certain limits, along an established path. Those who disagree, often choose not to speak out. They feel out of tune with the rest of society.

Andreia Rodrigues, a 26-year-old law graduate from Portugal, started organizing protests in central Stockholm in the early days of the pandemic, when she realized that the lack of preventive measures could lead to a large number of casualties. She was met with suspicion and hostility.

“Especially during the first few weeks, many would tell us to go home if we didn’t like Sweden’s strategy,” she recalls.

“Others would shout ‘long live Sweden’, as if we were enemies of the country just because we expressed an opinion which differed from the mainstream one.”

There were some people who would send messages to express solidarity to her group, called “Save Sweden – COVID-19”, but would not want to join for fear of the stigma.

“They would write things like ‘what would my family and my colleagues say if they understood that I am critical of the strategy?’”

Keith Begg, a 46-year-old Irish/Swedish national, was another key figure who lobbied for a stricter pandemic strategy.

The moderator of a private Facebook page called “Media watchdogs of Sweden”, which is critical of Sweden’s COVID-19 strategy, Begg recently decided to move back to Ireland after his group was accused on public radio of deliberately trying to damage Swedish interests abroad.

“I received a letter in my postbox referring to me as a traitor, I got hate speech… calling me a dirty foreigner,” Begg told The Irish Times.

Haters deemed one group of people even more despicable than foreigners who had a critical view of Sweden: they were the so-called landsförrädare, ‘traitors’.

Early in spring last year, a group of 22 researchers, later referred to as ‘the 22’, published an open letter criticizing Sweden’s Public Health Agency in the daily newspaper Dagens Nyheter. They did so at a time when the vast majority of the population supported “the strategy”.

Lena Einhorn, a virologist and a member of the 22, knows how it feels to receive abusive mail and even threats.

Now that public opinion has shifted, it is someone else’s turn to be affected by “the shit we received this spring”, she told Swedish news agency TT.

She underlined that at the time, “prime minister Stefan Löfven did not express any anger for what we were being exposed to.”

But with the Swedish public more divided than ever, politicians appear to increasingly deny the obvious.

Tegnell himself went as far as to claim that “the Swedish strategy is actually similar to those adopted by all countries”, raising a few eyebrows among his Scandinavian neighbours.

Norway, for one, had repeatedly warned Sweden against its strategy early in the crisis – not least because it was pretty clear that pursuing such different paths would have damaged the close cooperation and exchange of workforces between the two countries.

The first time the authorities advised people to use face masks on public transport at peak time, was in December

While the then-US president, Donald Trump, and UK prime minister, Boris Johnson, gave up on their idea of herd immunity as a viable solution very early on, Sweden de facto stuck to it for much longer – and imposed the first measures far too late.

The first time the authorities advised people to use face masks on public transport at peak time was in December.

Some blame Sweden’s failures and shortcomings on the enormous power entrusted to the Public Health Agency, which is part of Sweden’s “administration model”.

Agencies are in charge of making day-to-day decisions in the areas they are responsible for.

It is very likely that once the threat is over, this model will have to be dismantled and rebuilt.

The handing of the pandemic will inevitably leave Swedish society deeply scarred and divided, while its repercussions might be felt way beyond the next general elections in September 2022.