Yves here. It is hard for me to find adequate words to describe the punishment Louis DeJoy and his fellow stooges deserve for wrecking an important institution that is also a critical lifeline for many small communities.

While I can’t prove it, I am predisposed towards Howie Klein’s theory that there is more than the Biden Administration could do to make the Postmaster General Louis DeJoy’s life miserable and are refusing to do so. And I don’t mean horse’s heads or men in raincoats showing up after hours for a private conversation and pulling their coat back to reveal a holstered gun (a former Bridgeport DA said that was a favored local method for getting recalcitrant people to shape up).

Sadly, the USPS Inspector General is not independent but reports to the USPS board. And it seems to be about mail fraud, as in normal people using the postal service to commit fraud, and at worst postal employees committing fraud (say by intercepting checks) but not the Postal Service defrauding customers through terrible service.

However, the USPS looks like it has become so crooked that it probably can’t stand up to much actual scrutiny. However, absent a credible allegation of fraud that implicates board members, it’s hard to see how to get someone with subpoena powers in there.

My pet idea would be to have Congress impose new transparency requirements on the USPS in light of its terrible performance. There’s an existing analogy: the New York Fed tried to claim it was exempt from FOIA because it had a special not-really-public status (unlike the Fed Board of Governors). Bloomberg, which was seeking documents related to the New York Fed’s actions during the crisis, went to court and won.

Here I am not suggesting trying to rely on existing law but creating new requirements. Having to hold board meetings in public, like CalPERS, with very few “closed session” exemptions, requiring the board to hear and record public comments, and requiring management and the board to release documents in response to FOIA (and even better, having stronger transparency rules apply to the USPS) might make the DeJoy gang rethink whether saying there would be worth not being able to hide their considerable dirty underwear.

It’s too bad we Americans can’t do anything like the old Ministry of Finance audits. Back in the stone ages of the 1980s, a Japanese banking regulator was having a drink with the local head of Merrill Lynch (this by the way is standard operating procedure in Japan, the really important conversations between regulators and the regulated happen in the evening with alcohol).

Merrill Lynch guy proposes doing something he suspects the MOF won’t like much. The MOF official says that the Ministry would take a dim view of Merrill going forward. Merrill Lynch guy says, “What are you going to do, it’s not against the rules.” Technically that’s true but irrelevant since then there were just about no written regulations, everything was done via administrative guidance.

The MOF official said, “How would you like to be audited every day?”

A MOF audit then consisted of MOF officials arriving shortly before the official opening of business, in grey uniform and white gloves. One person would blow a whistle and yell out, “The audit has commenced!” The rest of the team would rush into the office, slapping seals on all the file cabinets and taping computers. And then they’d haul employees one after the other into conference rooms.

Any other ideas very much appreciated. 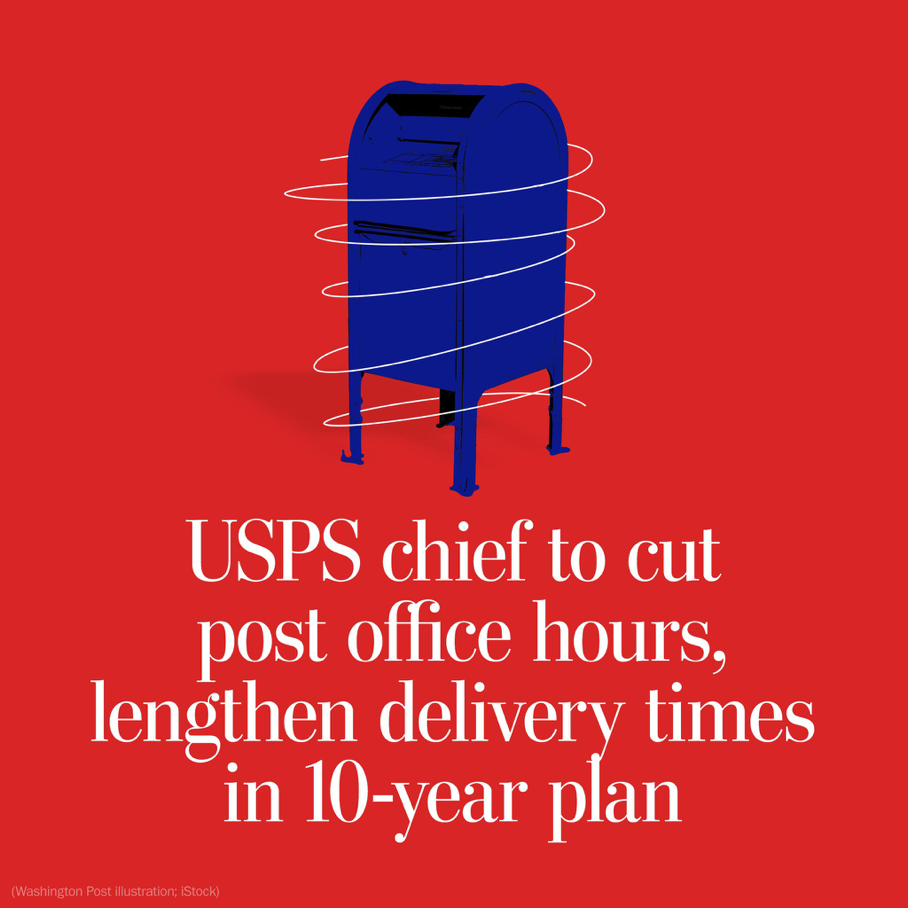 Many people are wondering why Biden hasn’t fired or suspended Trumpist postal saboteur Louis DeJoy whose goal has always been to wreck the postal system and who is continuing as though Trump were still in the White House. If Biden wanted to stop him, there have got to be ways to do so short of a much-deserved bullet between the eyes. This morning Washington Post reporter Jacob Bogage noted that “DeJoy will unveil the largest rollback of consumer mail services in a generation as part of his 10-year plan for the U.S. Postal Service, according to two people briefed on the proposal, including longer first-class delivery windows, reduced post office hours and higher postage prices.” This is super-unpopular with the public and at some point DeJoy’s cooties are going to run off on Biden– and congressional Democrats.

His his 10-year plan for the U.S. Postal Service? DeJoy shouldn’t have had a 10-minute plan for the U.S. Postal Service once Biden was inaugurated. He should have had a plan of looking for another job. Bogage reported that today’s announcement was “part of DeJoy’s strategic vision for the agency, one that has left postal advocates wary of any changes that could further diminish operations. Mailing industry experts have warned that substantial service cuts could drive away business and worsen the Postal Service’s already battered balance sheet.”

Flying right in the face of what the Congress and the White House claims is their vision– the one most voters opted for– DeJoy emphasized “the need for austerity to ensure more consistent delivery and rein in billions of dollars in financial losses, according to the people, who spoke on the condition of anonymity to discuss sensitive conversations. The agency is weighed down by $188.4 billion in liabilities, and DeJoy told a House panel last month that he expects the USPS to lose $160 billion over the next 10 years. The plan, which he told the panel was eight months in the making, is meant to reset expectations for the Postal Service and its place in the express-shipping market. It’s couched in the notion that the historically high package volumes of the pandemic era will persist, and reorients the agency around consumers who don’t use the mail service for letters, advertisements or business transactions as much as they once did. ‘Does it make a difference if it’s an extra day to get a letter?’ DeJoy told the House Oversight and Reform Committee in February. ‘Because something has to change. We cannot keep doing the same thing we’re doing.'”

Bogage noted that DeJoy was rolling out his plan ‘as Democrats have renewed calls for his ouster and the removal of the agency’s governing board, which backs him and the proposals. More than 50 House Democrats last week asked President Biden to fire the board’s six sitting members for cause– citing ‘gross mismanagement,’ ‘self-inflicted’ nationwide mail delays and ‘rampant conflicts of interest’– and to allow a new slate of Biden nominees to consider DeJoy’s fitness for office. Biden already has nominated two Democrats and a voting rights advocate to fill three of four vacancies (board Chairman Ron Bloom, a Democrat, is serving in a one-year holdover term) on the board of governors. If confirmed by the Senate, Democrats and Biden appointees would hold a 5-to-4 majority with the votes to remove DeJoy, if desired.” Is there someone who think Schumer should call a vote on these nominations… yesterday? Bogage– and convention media wisdom– claims “Biden cannot fire DeJoy” because “postal operations are purposefully insulated from the presidency and Congress to prevent politicians from tinkering with the mail system for political gain. The postmaster general answers only to the board of governors.” But I’m not so sure Biden is impotent as he’s pretending to be in this matter. He could certainly fire the board of governors (a majority of whom claims DeJoy is doing a good job)– and he should have done so already. And what makes this urgent– and makes me suspicious of Biden’s lethargy in the matter– is that “Most of DeJoy’s changes will not face regulatory road blocks. The postmaster general unilaterally controls operating hours at post offices, and the board of governors appears to back DeJoy’s changes to delivery times.” Today Bloom– the Democratic chairman of the board– joined DeJoy to announce the policies.

The Postal Service must consult the Postal Regulatory Commission on price increases, but the regulator issues only a nonbinding advisory opinion. A group of mailers is suing the commission to block the new pricing regimen, but DeJoy has signaled he plans to forge ahead with new prices regardless.

DeJoy plans to extend the service standard for first-class mail by a day, the people said, confirming a previous Washington Post report. The Postal Service currently aims to deliver local first-class mail in up to two days, and nonlocal mail in three to five days. The agency has missed those metrics for years but has struggled mightily during DeJoy’s tenure.

Over the holiday season, postal performance reached its worst levels in generations: 71 percent on-time delivery for two-day mail and 38 percent for three-day mail during the last week of December. Rep. Raja Krishnamoorthi (D-IL) compared those scores to unfavorable odds in a Las Vegas casino.
“Sending a letter should not be a game of chance,” he said.

The Postal Service’s delivery scores have rebounded in recent weeks, to nearly 83.7 percent for first-class mail the week of March 12. The agency attributed the improvement to more capacity in the air transportation network and the end of winter storms that delayed operations in much of the country.

The metrics remain well short of the agency’s marks from before DeJoy’s arrival last June. The week before DeJoy implemented his midsummer changes, the Postal Service delivered 90.6 percent of first-class mail on time. It hasn’t reached 90 percent in the eight months since.

DeJoy also plans to cut retail post office hours, the people said, a return to one of the changes he first implemented. The Postal Service’s Office of Inspector General found that the agency expanded lunch breaks in certain post offices beginning July 22 and often sought to match consumer demand with operating hours by closing post offices early. DeJoy suspended the policy after a public uproar and after members of Congress accused him of shuttering postal facilities in the run-up to the election.

DeJoy also has discussed an “imminent” postage rate increase with industry officials tied to a new ruling from the Postal Regulatory Commission that created a new pricing system. Industry officials said that increase could come as soon as this summer and be as large as 9 percent, a cost many say will be passed on to customers.

Corporate Democrat Carolyn Maloney (D-NY), a notorious bribe-taker and Wall Street puppet, who Pelosi made the colossal error of appointing chair of the Oversight Committee, is working with DeJoy on a so-called “postal reform bill” instead of just removing the requirement that the post office pre-fund 75 years of retiree healthcare at once. Maloney claims her bill will do that, which would save the post office $35 billion in liabilities– money the agency has not paid into the health-care accounts since 2011. If retired postal employees are integrated into Medicare– or if Congress ever passes Medicare-For-All– the Postal Service will save another $10 billion over 10 years. Postal banking would be the most effective way to deal with this– although that doesn’t fit in with the neoliberal wing– AKA the dominant wing– of BOTH political parties.

I sure hope Biden and the congressional Democrats aren’t allowing DeJoy to shoulder the onus for a bad way to solve a hard problem that they don’t want to tackle themselves. That would be pretty disgusting.