Yves here. This article confirms what various commentators have said based on observation: jobs in the restaurant, hotel, and retail sector have been hit hard by Covid. Those skew toward female and lower-income workers. The impact on them can be tracked through official data. 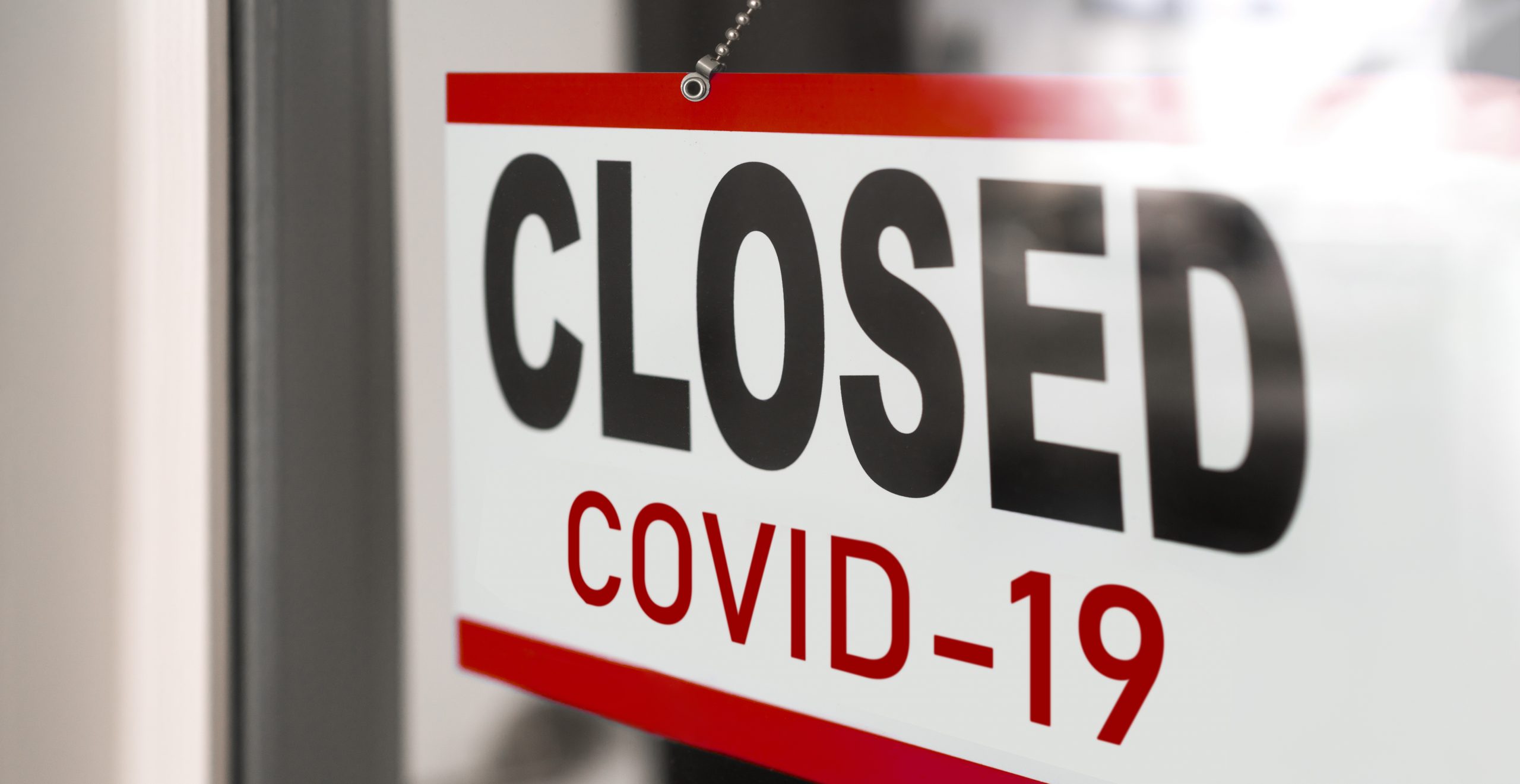 Understanding the impact of recessions on economic security, especially employment, motivates much of macroeconomics. Most analysis and commentary describe aggregate effects such as the peak-to-trough drop in employment, the rise in the unemployment rate, or the time it takes for employment to recover back to its pre-recession level. But as attention to rising economic inequality has intensified in recent years, studies have given more emphasis to the connection between recessions and inequality.

In a new INET working paper, we examine inequality in employment outcomes across social groups during recessions. We take a comparative perspective, studying results from two recent and severe US recessions: the “Great Recession” linked with the global financial crisis beginning in late 2007 and the “lockdown” recession caused by the COVID-19 pandemic. Comparing these two events presents an interesting case study to explore inequality in recessions.

The severity of a recession depends both on how much employment declines and the persistence of those declines. The primary job-months lost statistic in our analysis is designed to capture both of these dimensions. This measure simply adds up the difference between actual employment and pre-recession employment over the recession months. For example, if the pre-recession employment trend for a demographic group was flat and a person in that group lost a job in April but went back to work in July, that person’s experience would add three job-months lost to the total in their demographic group.

We calculate job-months lost with data from the US Current Population Survey stratified by gender, race/ethnicity, age, and education. Our results show: 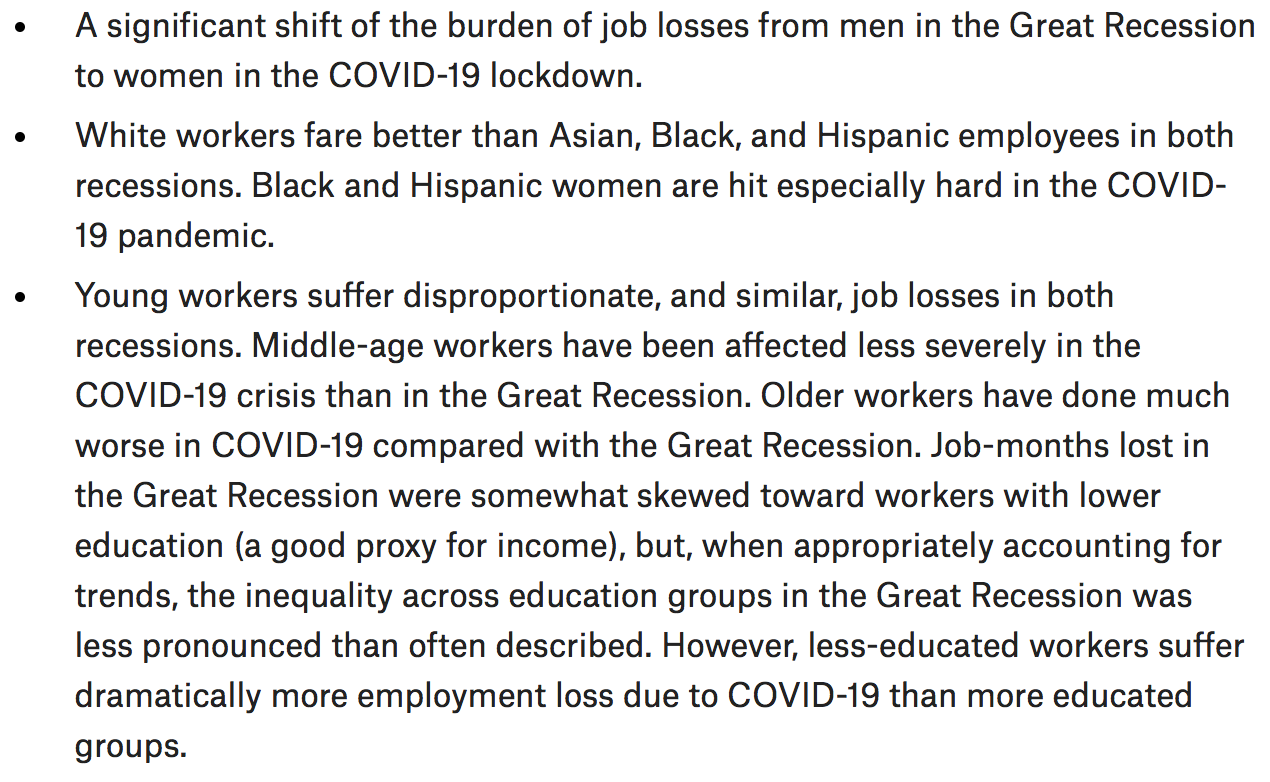 As Catherine Rampell writes in the Washington Post, “[p]ast research has found that the longer a worker is unemployed, the more difficulty that person will have ultimately returning to work — whether because of stigma, skill deterioration, severed relationships with past employers or other factors.”[1] These effects may have seemed to be less of a concern in the COVID-19 crisis as US employment appeared to bounce back very quickly in May and June of 2020. But the recovery slowed, especially as the pandemic reasserted itself in November and December of 2020. The percentage decline in total jobs at the end of February 2021 relative to the February 2020 peak was almost the same as the worst peak-to-trough employment gap in the Great Recession and labor force participation remains depressed. Permanent job losses and detachment from the labor force during the COVID-19 crisis will likely have widespread effects on employment prospects for years to come and these effects will be greater for disadvantaged groups.

Recessions are bad; inequality makes them worse. The need for effective intervention to offset the macroeconomic effects of recessions is reasonably well accepted among policymakers, especially in the aftermath of the Great Recession when the fiscal response was, according to many economists, inadequate. The additional evidence on inequality and recessions, especially the COVID-19 recession, increases the urgency for effective policy. Recognizing how recessions hurt the welfare of the most vulnerable members of society increases the significance of the social costs beyond what aggregate measures imply on their own. Furthermore, the unequal effects of recessions, and the persistence of these unequal effects after the downturn ends, slows or even reverses progress toward the worthy social goal of creating more equitable societies.

The connection between recessions, inequality, and macroeconomic policy has another, somewhat more subtle, implication. Our results demonstrate how individuals and families in lower socio-economic circumstances suffer more severe effects from the recession. The goal of social equity, therefore, implies they should receive disproportionate relief from policies designed to stimulate the aggregate economy. This point relates to the debate in the U.S. about the size and distribution of “stimulus checks” sent to American households. These payments are a fixed amount per person up to a certain income level, after which the payments phase out. Some economists oppose this kind of demand stimulus because much of it will be saved rather than consumed, leading to less impact on demand. The criticism has some relevance, especially in the midst of a pandemic when people cannot or choose not to spend on many discretionary activities to protect their health. But lump-sum payments of a constant amount across individuals have a much bigger proportional impact on lower-income households. A disproportionate share of these households will be affected directly by the pandemic and be in critical need of this assistance. For lower-income households that may have dodged income losses during the recession, the lump-sum payment will still be a welcome, and significant, financial boost. If they do not spend the funds, they can pay down debt or build some reserve for future financial shocks. These payments, at least during the pandemic, are a step toward the important social goal of greater economic equality.