Yves here. This post provides a very informative, long view of the shifting status of women in society. However, it is silent on how changes in the gender gap came about. In the last 100 years, women getting greater reproductive control was central to eing able to enter the workforce in large numbers. They were less hostage, particularly if they were single, to pregnancy upending their lives. And the opening up of more career prospects, particularly jobs with higher pay, meant it was attractive for women to defer child-bearing, be less dependent on a man when they did have children, and not make an enormous economic sacrifice if they stayed single.

I know very little about the standing of women in ancient society. But Michael Hudson has mentioned that women ran (and it sounded as if they were owner/managers) of beerhouses, and they were important back then.

But I hate to say, women are likely to remain subject not just to bearing more of the cost of childrearing than men, but also to their smaller size. Harvard Business School tracks lots of data about its graduates. The single variable that best explains how much they earn is height.

The international differences in women’s status are striking. When and where did those differences first emerge? Is women’s status improving everywhere today so that we expect global gender equality eventually? This column uses data from the Human Biological Record to explore women’s status over the last 5,000 years. The records show no long-run trend in women’s share in recorded history. Historically, women’s power has been a side-effect of nepotism: the more important family connections, the higher the women’s share. But self-made women began to rise among the writers in the 17th century before a broader take-off in the 19th century. Exploring these captivating and yet unanswered questions teaches us about the future of women and other emancipation movements.

Finding my path among a crowd of cyclists on an April morning, the frosty weather reminds me that Stockholm lies at sixty degrees north. I am not surprised that most of the cyclists around me are women. But in fact, I should be shocked if I were to think in a historical and international context.

Women have biked a long way to get here. They even adapted their clothing style to take advantage of the independence that this new, cheap mode of transport offered at the turn of the 20th century. Susan B Anthony, the American women’s rights activist, wrote in 1896: “Let me tell you what I think of bicycling. I think it has done more to emancipate women than anything else in the world” (Shrock 2004, Macy 2017).

Even in Sweden, the most gender-neutral country in Europe, just a few decades ago the cyclist crowd would be majority male, like most cyclist crowds in the world today (EIGE 2020). Cycling is, of course, only one dimension of women’s status, which range from legal rights, informal customs, to representation in positions of power.

What are the historical roots of these international differences? How far back do we need to go in history to find the root of divergence? Should we expect a convergence eventually?

The rise of women’s status has come with many struggles. First-wave feminism fought for women’s property and voting rights, leading to enfranchisement in developed countries during the 20th century. Starting in the 1960s, second-wave feminism targeted workplace and legal inequality. Following Generation X’s third wave in the 1990s, today we are living through the fourth wave of feminism as the spotlight of #MeToo justice reached men of power from all walks of life.

But was it really the case that half of the world population were repressed for the entire history of humankind, leaving half of the total brainpower unused? We had doubts from the beginning, as many outstanding women throughout history pop into my head.

What about Sappho? What about Joan of Arc? Female rulers held power in almost every civilisation, from Hatshepsut (the mighty pharaoh in 15th century BCE) to more than a millennia later when Cleopatra VII reigned over Egypt, to the “queens era” of Europe, usually dated from the 14th to 18th century CE, with prominent queens like Elizabeth of England and Christina of Sweden (Monter 2012).

Despite the debate on gender balance being front and centre in many societies, most research has focused on case studies of a few exceptional women or women’s status in a specific region in a particular era. Although these provide valuable insights, we still lack a unified view of how women’s status evolved over time and across countries.

Our work seeks to address these questions systematically and quantitatively and provide a unified view of how women’s status evolved over the entire 5,000 years of human history.

First, crowd-sourcing produces the largest voluntary collaboration in human history through Wikipedia and Wikidata. Second, machine learning transfers all this information to datasets like the Human Biographical Record, where we can use modern statistical methods to uncover historical patterns.1

As part of this research agenda, we attempt to write a quantitative history of women over the last 5,000 years (Nekoei and Sinn 2021a). This is an exercise in long-run quantitative history in the spirit of École des Annales (social history). We measure the female share of people at the top of the social hierarchy in each era as a proxy for women’s status. This measure echoes how we today use the female share in almost all our debates on women’s emancipation.

To our surprise, we document no long-run trend in the women’s share at the top when analysing 5000 years of recorded human history (Figure 1). While women’s share fluctuates around an average of 10%, the main positive outlier is the third millennium BCE, driven by a high women’s presence among Ancient Egypt’s observations in the Human Biographical Record and echoes Egyptian women’s equal rights to men. Women could initiate divorce, own and transmit property, receive an equal inheritance, and even achieve immortality (Lesko 1998, Bridenthal et al. 1998, Hughes and Hughes 2001, Johnson 2002)! 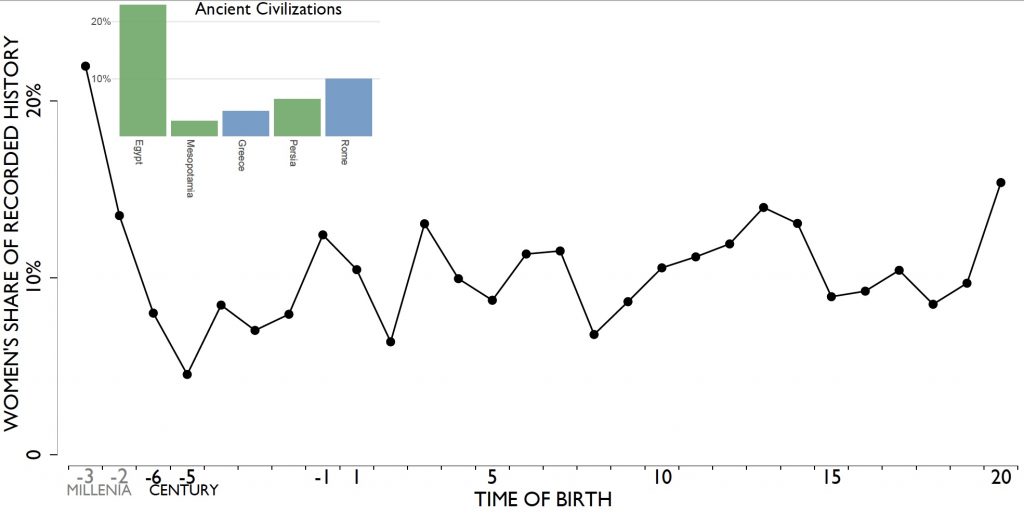 This finding puts women’s contemporary struggle for equality in historical perspective. Women’s emancipation is not a contemporary concept, but the world had actually progressed quite far already a long time ago, before regressing.

But the modern rise of women has a distinct and important feature. A closer look at the Human Biographical Record individual-level data reveals that for most of history, women who became part of the elite were either born into influential families or married into them. We show that women’s power has been a side-effect of nepotism: the more important the family connections, the higher the share of women at the top.

This relationship is present across time (in the time series) and geographies within a period (in the cross-section), but it slowly begins to break down in recent centuries. Indeed, Figure 2 shows a rising prevalence of women who were not born into families or married to males with power and fame, a group we call ‘self-made’. But where did this group come from? 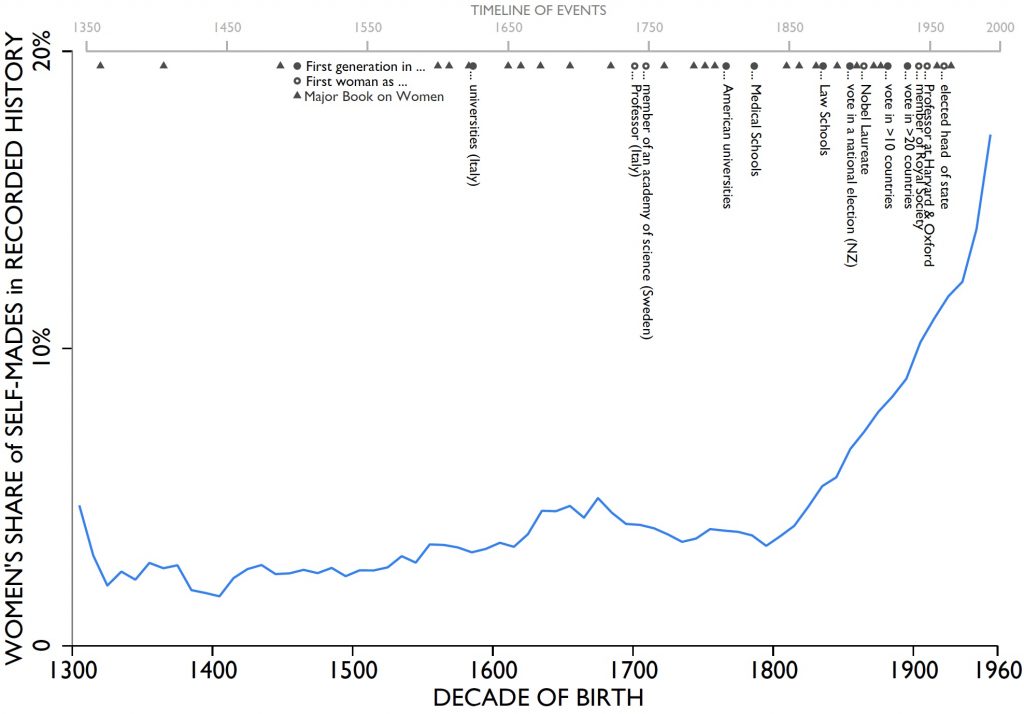 The first rise in the share of women among self-mades is recorded among writers and poets born between 1620 and 1660. It reflects the birth of ‘the feminine reading market’ in Protestant Europe (Figure 3). 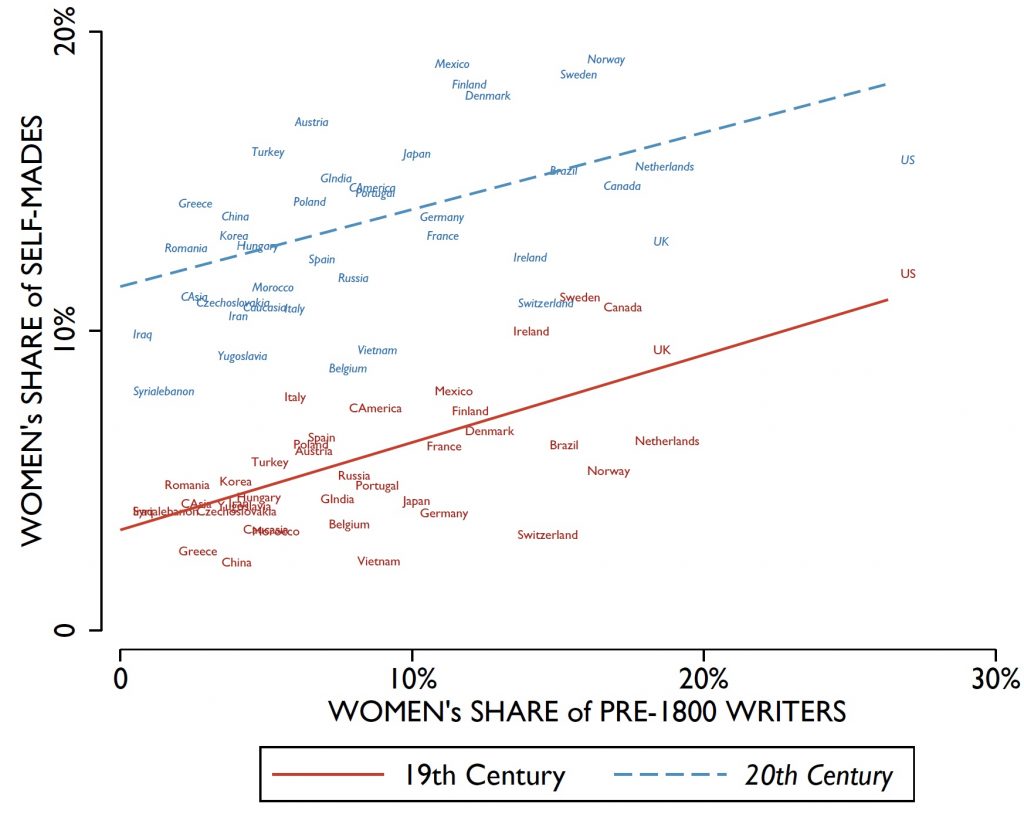 This market emerged in the context of increasing the literacy and purchasing power of women. The women writers and poets who supplied this market were educated by informal ‘household academies’, as universities during this period were closed to women (Figure 4). These highly educated women flourished in new informal public spheres: salons and the Republic of Letters. During the same period, both the marriage and labour markets awarded a higher return to women’s education. The new feminine reading market encompassed new genres, such as the novel, in a new language: vernacular, not Latin. The book market structure with many small buyers and less guild presence may have played a significant role in creating a space for self-made women to flourish.

A century and a half later, a broader take-off of self-made women started with the 1800 birth cohort – first among artists and scholars, followed by elected politicians, and finally appointed politicians. There is no sign of a slowdown in the rate of progress, and self-made successful women have become a ubiquitous phenomenon in the recent period.

A strong writer wave in the 17th century predicts a more substantial take-off of self-made women in the 19th century (Figure 5). This effect has persisted and created cross-country divergence. 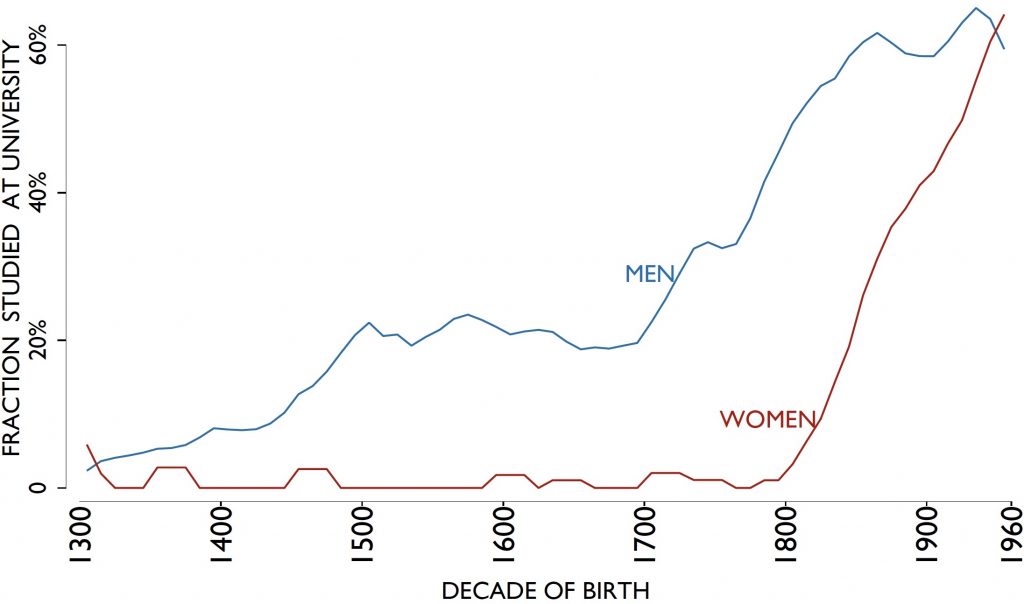 We interpret these historical patterns through the lens of a theoretical framework. Success has different dimensions – pecuniary or not, lasting or not – which all depend on three ingredients related to family connections, control of the individual (skill), and luck. Although all these elements are gender-neutral, their rates of return are not.

The framework illustrates that the return rate of family connections has fluctuated, while a gender gap in the return rate persisted. This led to the trendless movement of the share of women, but no change in self-made women’s share for most of history. The rise of self-made women – both the initial wave in the 17th century among the literary elite and the later broader take-off around the 1800 birth cohort – depicts a rise of return on women’s skill.

We arrived in front of the German school, where my daughter will jump off the bike. Here, Sophia Brenner (1659–1730) was exceptionally allowed to study when the school was only open to boys. In our data, she is part of the literary wave of women writers of the 17th century (Figure 3).

Latin, the language necessary for a professional career, was considered inappropriate for Sophia Brenner. But when the Latin teacher spotted her assisting a fellow with his Latin homework, the teacher asked and received the parents’ permission to teach her Latin too. Her coronation poem to Queen Ulrika Eleonora of Sweden in 1719 justifies her title of ‘the first Swedish spokeswoman for female rights’:

Our body is nothing but the clothes of our soul
the only difference between he and she,
as for the soul concerned, it is just as good,
yes, just as great, in many woman’s body.