Yves here. Tom Neuburger provides an important warning on the escalating campaign to silence politically inconvenient information and opinion by classifying anti-capitalist views as extremism and subjecting them to the weight of the surveillance/intel state.

However, I beg to differ in his assessment as to where the perceived threat to the officialdom lies. It is now the right, not the left, but you can be sure some lefties will be taken out and shot for the sake of looking evenhanded. What amounts to the left (as opposed to “liberals”) has been weak for a very long time.

By conrast, it’s well documented in the social sciences literature that in times of financial stress (as in post the financial crisis, and in particular, the wipeout of black wealth due to Obama’s failure to force mortgage servicers to make principal modifications to prevent foreclosures for borrowers with viable incomes), the center of political gravity typically moves to the right. The left is too politically weak to prevent a serious threat; look at how the Democrats successfully kneecapped a mere social democrat like Sanders in the primaries.

The reason the right is a perceived danger is that it undermines the legitimacy of the professional managerial class. The fact that the supposed elites are rattled by QAnaon and disrespect for masks (which they were late to embrace) and now vaccines (and sometimes conflates the two) is a sign of how insecure they are. However, the 1/6 Capitol seizure, as in the fact that a rag tag group with only a small contingent of tactically savvy troublemaker (and even then not armed) succeeded in storming what should have been a highly defensible buidling was taken as a proof of their vulnerability.

Having said that, the fight over voting right is an important battle, but let us not forget that Team Dem also plays disenfranchisement games, such as having few polling stations in low income neighborhoods in solidly blue states. But much lower-stakes matters are too often get the same or more airplay.

Finally, I also quibble with Tom’s subhead: “There’s some kind of civil war coming, and the state is getting ready to fight it.” First, there’s a lack of agency, when in fact Team Dem looks to be of the view that it can escalate with deplorables conservatives and win. Second, have they looked at a map, or for that matter which groups tend to be big on owning guns and practicing at target ranges?

Yes, for any specific encounter, the police can stomp on gun-armed wannabe rebels, since they have better armament (tanks, helicopter gunships, sound weapons, plus protective gear). But Biden invoking F-35 as a defense (against domestic terrorism) displays a peculiar lack of understanding of the terrain. Domestic insurgents, when they get their act in gear (big if in the case of the fragmented US) can wage effective low tech asymmetrical warfare.

And what happens if the cops refuse to shoot on people they regard as part of their communities, or don’t put up a full bore attack (they can legitimately invoke Waco, that they might win the battle and lose the PR war).

Have they not worked out that liberals and the PMC dominate in only a few concentrated geographic area, nearly all on the coasts, and not contiguous to each other? What happens if say the right wing Central Valley decides to send food only to flyover? What happens if enough truckers decide not to take routes that take them to cities like New York and San Francisco? The Mark Blyth observation, “The Hamptons are not a defensible position” applies to their situation generally. 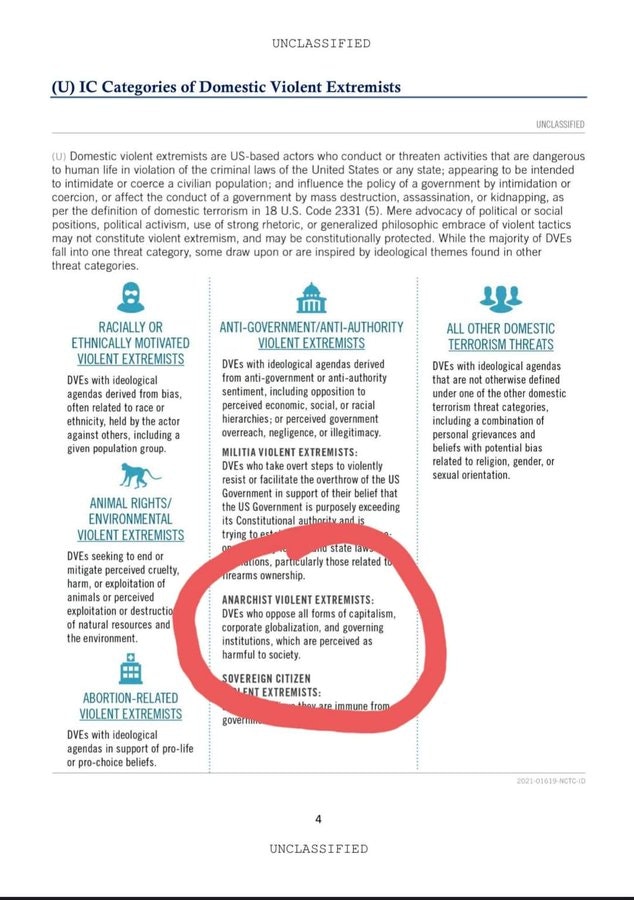 I’ve alluded to the new National Security laws that are coming. Resistance Liberals do and will praise these laws, thinking that the government is finally going to crack down on right-wing domestic extremism.

The government itself, of course, understands that (a) right-wing extremism is no threat to government at all… 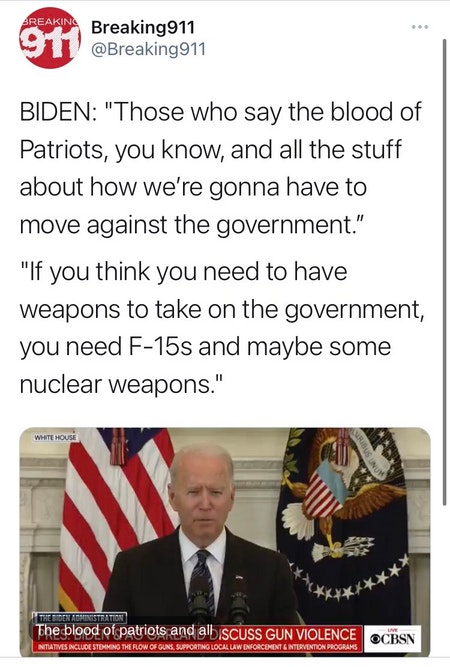 …and (b) half of the nation’s cop force, if not more, share right-wing views anyway…

No, the only real threat to the Establishment State these days is from the actual left, those opposed to the pathological and ideological worship of money (we call it “Milton Friedman neoliberalism” these days). Sanders posed such a threat, and the whole of the Democratic Party establishment combined to take him down:

If actual fascists take over the corporate state, they will be merged into the state, or the state will be merged into them. Fascist generally represent no threat to the corrupt flow of money that already forms the lifeblood of most governments, since Money always loves authoritarian rule. Pinochet is an excellent example of that. So is the little Austrian no one wants to name.

But if anti-corruption forces really get up a head of popular steam, it will be like mixing oil and water trying to get their goals to combine with the corruption that keeps the hyper-rich in power and place. The actual left is the actual “enemy of the state,” and the state well knows it.

Resistance to that resistance will be political, of course — witness the fate of the Sanders campaigns of 2016 and 2020. But it will also be armed as well, as it always is.

And then it brings us, by coincidence of synchronicity, to this from Forbes: “The U.S. Military Wants A Better Microwave Weapon. Will The Police Also Use It?”

Taken together, we can see the writing on the wall. There’s some kind of civil war coming, and the state is getting ready to fight it.

It’s just a fact — there’s a rolling civil war brewing in this country, a messy, badly led, ideologically-mixed-with-many-elements-suspect rebellion against all of the ways that Big Money screws small people, which is almost all of the rest of the country.

(Most of the professional class, that group in the top 10% but below the top 1%, is exempt from these rebellious impulses. They still have happy lives, and the world still looks to them as it looked to their mothers and grandmothers in 1955. They largely have no idea, for example, that police violence against the black, brown and poor is systemic, that it can’t be fixed by hiring better apples to replace the bad ones. Cops don’t want better apples, cops who will turn the bad cops in for their crimes. That kind of better apple gets shot.)

This rolling civil war in all its manifestations is what the new national security posture is concentrating to oppose. Again, cheered by Resistance Liberals, to their inevitable detriment and regret.

What’s on the horizon for us? Anything is possible right now, good outcomes and bad, but sadly the bad seems most likely to show up.

Biden is right: “If you think you need weapons to take on the government, you need F-15s and maybe some nuclear weapons.” Neither the rebellious left nor the rebellious right has any of that.

The only way the rebellious right will take power is via their treacherous pro-corporate elected and appointed officials, people like Amy Coney Barrett, who was put on the court, according to the folks at Breaking Points, not to wage culture war, but to ensure and enhance corporate power. Obamacare, bane of the cultural right, still stands — even Coney Barret defended it — but Goldman Sachs is defended at all costs and from all sides of the supposedly divided Court.

And the only way the rebellious left will take power is via the almost-entirely-closed political system. The first modern chance of that was in 2008 and the duplicitous “Hope and Change” campaign of Barack Obama. But he was never that guy. He was always this guy instead.

The second modern chance was the Sanders campaigns of 2016 and 2020, both quashed by establishment forces, who then folded the veneer of his ideas into their 2020 sales pitch. (And he, in all innocence I’m sure, let them.)

Which leaves both groups nowhere at all, and the mass of suffering people — the non-ideological soccer moms and put-upon three-job dads — have nowhere left to put their hope for change (there’s that theme again). Which means they will likely just take it till they can’t, then join whatever rebellion already exists.

• If the rebellion is still as badly led and ideologically iffy as it is today, at least in many of its elements, expect the arrival of the latest police weaponry, backed by Biden’s muscular anti-anti-corporate NSA and FBI to join to put them down.

We then enter the world of a heavily policed state, very heavily policed. But not to worry; that won’t last forever. The Climate Jack-In-The-Box will pop up sooner than anyone expects to scramble all outcomes and make policing styles the last thing on anyone’s mind. Mere survival, economic and physical, will take center stage after that, with policing — which can only devolve to direct and naked service of the rich — just one of the threats one must survive against.

• If the rebellion is reasonably well led, however — think of the early Free Speech, anti-war and hippie movements of the 1960s — there may yet be a chance for positive change, though in chaotic circumstances, nothing is truly certain. A well-organized and focused general strike, for example, would take this path.

• What’s most likely, though, is that we muddle along, taking a crumbling semi-stable middle road, living sad, long-suffering daily lives — better in the margins under Democratic administrations; worse in all ways possible under Republican ones — until the nation breaks apart under the stresses of climate catastrophe.

Think: If you see no improvement in the ultimate climate outcome, only degradation and devolution with riots and refugees every where you look, at some point the waterless American West can no longer be governed from the East. Nor can it govern itself, except in local chunks.

Even the folks at the IPCC, slow as they are, are starting to get it. From Phys.org: “Crushing climate impacts to hit sooner than feared: draft UN report.” If the climate can only get worse, this what the future looks like, or the start of it.

(And don’t worry, China haters. The Chinese will have exactly the same problem. They have two “breadbaskets,” spread roughly a thousand miles apart, and the early ancient near one, the one near Beijing, the one that spawned the Han civilization in the first place, will be under water.)

Will any of this evil occur? It doesn’t look so now. There’s still a game on — “How ’bout them Bears?” we still ask — and people still care about the next election, still think it matters if NCAA athletes are ripped off a lot or just a little less. And yes, in the short term all of that does matter. If you died next year, you were smart to focus on this day and the next.

But in the aggregate, that semi-comfortable thinking could only hold for the next five years or so. When the real tsunami hits, the one no one in power is looking at or working to help stop, I believe the fate of next year’s Bears will be moot. In some year, there won’t be a season at all to worry about.

Which makes, in the aggregate, what we do today doubly important. Yes, we must navigate our daily lives safely and well. But the rolling civil war and the tsunami that will end it better also be high on the list of what we care about. There are still things we can do to ensure better outcomes than the ones we and our children are likely, in the longer run, to see.