Upriver: A researcher traces the legacy of plastics Orion

Ivermectin for COVID-19 in Peru: 14-fold reduction in nationwide excess deaths, p<0.002 for effect by state, then 13-fold increase after ivermectin use restricted (preprint) OSF Preprints

Incidence of SARS-CoV-2 infection according to baseline antibody status in staff and residents of 100 long-term care facilities (VIVALDI): a prospective cohort study The Lancet. The Interpretation: “The presence of IgG [Immunoglobulin G] antibodies to nucleocapsid protein was associated with substantially reduced risk of reinfection in staff and residents for up to 10 months after primary infection”

US to donate 750,000 COVID jabs to Taiwan amid China row Al Jazeera

Myanmar’s National Unity Govt ‘No Longer Has Faith’ in ASEAN The Irrawaddy. Commentary:

Ten years ago when everyone wanted to claim credit for Myanmar's 'miracle' reforms, Asean credited its 'engagement' and many in the West credited its sanctions. Both were wrong. But that's why these are now the default policies. There's a false assumption of past effectiveness. https://t.co/0bZiRmcfVU

Bad faith and brinkmanship: NI Protocol on the edge RTE

White House admits CIA involvement in “War on Corruption” which jailed Lula and elected Bolsonaro Brasilwire. Operation Lava Joto began in 2014 and was still operational in 2019, so I guess we have both Obama and Trump to thank for Bolsonaro, good job, you beat the socialist.

With Biden’s 2022 budget, civilian agencies are due for a hiring spree Federal News Network

Justice Department withdraws FBI subpoena for USA TODAY records ID’ing readers USA Today. The lead: “The FBI has withdrawn a subpoena demanding records from USA TODAY that would identify readers of a February story about a southern Florida shootout that killed two agents and wounded three others.”

YOU LOVE TO SEE IT: The Stimulus Checks Really Worked Daily Poster

As I have been saying for some time, preventing #MedicareForAll was and is the #1 policy goal of Democrats. Here is their happy dance at having achieved it:

This after a vaccination program that was free at the point of care, with no co-pays, deductibles, or networks. Only the liberal Democrats could use a pandemic to herd people into buying (lousy) health insurance, and then present that as a policy triumph, after using single payer principles to defeat the pandemic (at least for this round). Will Temple Grandin please pick up the white courtesy phone? (Also, Obama looks bad; the con really shows on his sagging face now that he no longer has to pretend.)

‘This Should Be the Biggest Scandal in Sports‘ Sports Illustrated

The U.S. Needs a New Constitution to Address the Fundamental Wrong of Slavery Teen Vogue

The ugly truth behind your fancy rewards credit card Vox

We don’t know how to get dressed anymore WaPo. “We”? “Essential workers” — remember them? — have never forgotten, since they go to work every day:

That essential workers are heroes shit was the most condescending bullshit, second only to the insane ritualized clapping they were doing in the UK

40 years of the HIV/AIDS response The Lancet. Landing page for many articles.

40 years of AIDS taught us epidemiologic humility. We need to apply that lesson in fighting Covid-19 STAT

How to stop overthinking Psyche 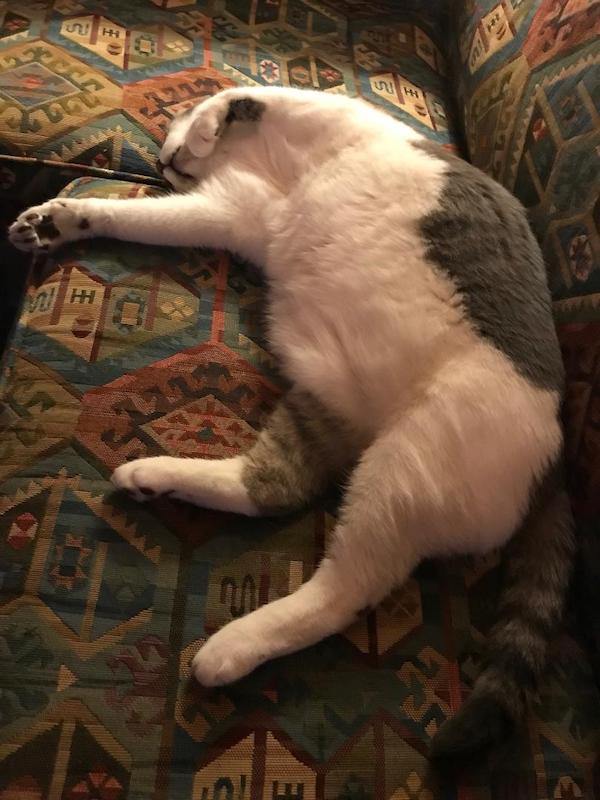 AM writes: “Another picture that I should not have taken of my lovely cat Emmett but couldn’t resist. Rubenesque…”