Yves here. While the authors of this study came across a very large and rich data set they could mine on the question of data privacy concerns versus privacy behavior, I wonder if China is an outlier due to the extent of government surveillance. To put it another way, spending time to dial down the amount of snooping done by Alipay apps may seem not terribly productive in light of the extent of official monitoring. And in keeping, the ones who are most concerned about snooping may actually be very cognizant of Edward Snowden’s warning, that the way to avoid being spied on is to minimize interaction with the Internet, and they feel they have no way to do that. In other words, they’ve thrown in the towel.

Online consumers tend to say they care about privacy but at same time choose to share their personal data either for free or for little reward. This column examines this ‘data privacy paradox’ using data from a survey of Alipay users. It finds no relationship between users’ self-stated privacy concerns and the number of third-party mini-programs on the site they agree to share their data with, and argues that this may be explained by users with stronger privacy concerns tending to benefit more from using these mini-programs. Rather than having innate data privacy concerns, consumers appear to develop concerns as a by-product of the process of using digital applications.

Data sharing is crucial in the development of the digital economy. As illustrated by the recent report from the Luohan Academy (2021), data sharing fosters connectivity, decision making, and trust. At the same time, privacy concerns attract growing attention, which is important for maintaining the sustainable development of the digital economy, as discussed in several recent Vox columns (e.g. Acemoğlu et al. 2019, Bergemann et al. 2020, Nguyen and Paczos 2020). A less understood phenomenon is the ‘data privacy paradox’, which refers to a general disconnect between consumers’ self-stated privacy preferences and their actual privacy-seeking behaviour – consumers in a wide range of survey and experimental studies often say they care about privacy, but at same time choose to share their personal data either for free or for small rewards. The presence of this disconnect is often used as evidence to argue either that consumers’ privacy concerns are not credible or that privacy is no longer achievable in the age of the data economy. Does the privacy paradox exist in realistic settings when consumers are faced with choices to share personal data with digital service providers? If so, what causes consumers to ignore their privacy concerns in data sharing?

The privacy literature has suggested a number of psychological and behavioural factors to explain the data privacy paradox, including consumers’ ignorance about the consequences of data sharing (Pew 2019); present bias, which causes consumers to overweight immediate convenience from using digital applications and underweight future cost of sharing personal data (Acquisti 2004); and illusion of control, which causes consumers to feel more in control when making data-sharing choices (Brandimarte et al. 2013). While these behavioural biases are clearly relevant, it remains unclear how consumers’ data-sharing choices are related to their demands for digital services.

In our recent study (Chen et al. 2021), we address these issues by conducting a survey of Alipay users about their data privacy preferences and then matching their survey responses with rich administrative data about their data-sharing choices on the Alipay platform to analyse how their data-sharing choices are related to their stated privacy preferences. Alipay is a highly popular payment and lifestyle platform with more than 900 million active users in China. In addition to its widely used payment system, it also hosts over two million third-party mini-programs, which are lightweight apps that run inside Alipay to offer a variety of digital services to Alipay users. To use a mini-program, a user must first authorise sharing of certain personal data with the mini-program. The requested data sharing varies across mini-programs from innocuous information, such as nickname, to highly sensitive information, such as the national ID number and credit score.

In policy discussions, a widely held view is that the privacy paradox exists because users simply cannot afford not to use popular digital applications. Because the mini-programs on Alipay vary substantially in the importance of the provided services and the sensitivity of the requested information, this setting provides an ideal opportunity to study how different users, when given the options, balance their privacy preferences with their demand for digital services. 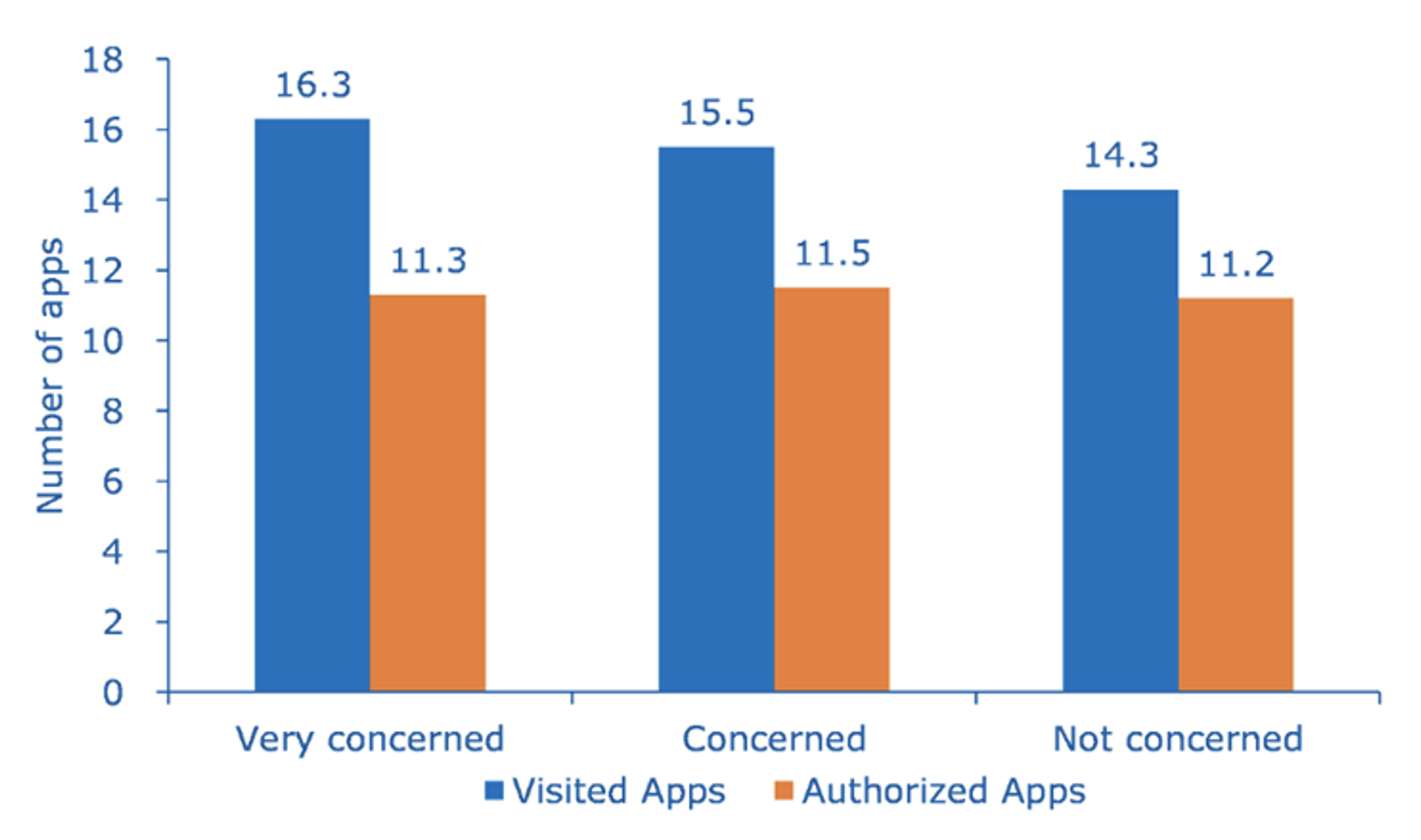 Even though one would expect users with stronger privacy concerns to be more reluctant to share personal data, these three groups of users with different levels of privacy concerns, on average, authorise data sharing with almost the same number of mini-programs, even after controlling for user characteristics such as digital experience, age, gender, and city, as well as mini-program fixed effects. This lack of difference in data-sharing authorisations is puzzling and confirms the data privacy paradox in a setting that is highly relevant to the digital economy.

It is tempting to attribute the data privacy paradox to noisiness and unreliability of survey responses. While survey responses are indeed noisy at the individual level, we find that at the group level, the privacy concerns stated in survey responses are positively associated with respondents’ propensity to take two privacy-seeking actions in Alipay: (1) cancelling previously authorised data sharing with mini-programs; and (2) changing Alipay’s default privacy settings, which tend to make a user’s information visible to other Alipay users. These findings thus validate the survey-based measure of privacy concerns.

Our study adds to the literature on the data privacy paradox, including Gross and Acquisti (2005), Goldfarb and Tucker (2012), and Athey et al. (2017). These studies have designed creative surveys and experiments to measure individuals’ privacy preferences (see Acquisti et al. (2020) for a recent review of this literature). By combining survey data with extensive administrative data, our study not only confirms the paradox in a highly relevant setting but also uses the paradox as an entry to analyse the nature of data privacy concerns. We uncover data privacy concerns as a preference developed through the use of digital applications, which, to our knowledge, is a new dimension not previously explored by the literature. This nature further implies that data privacy concerns may increase over time with the deepening of the data economy, making consumers more restrictive with their data sharing. This effect may in turn prevent the economy from realising the full promise of data sharing implied by nonrivalry and increasing returns to scale, two fundamental features of data sharing (e.g. Jones and Tonetti 2020, Farboodi and Veldkamp 2020, and Cong et al. 2020).

Our findings bring insightful implications for today’s discussion on data governance. Consumers may develop more privacy concerns in the process of adopting digital applications to meet their digital demands, the best way to protect privacy may not be to restrict data sharing, as it will hurt consumer welfare (Liu et al. 2020). Instead, promoting better privacy protections would be a more promising way to both harness digital dividends for consumers and promote sustainable development of the digital economy.