Yves here. Climate change reporting has had plenty of big stories to chase of late: baked Alaska, the superheated Pacific Northwest, oceans and Siberia burning, the odds of yet another bad fire season in California. But super heavy rains in New York City just produced severe subway flooding, and not with a hurricane Sandy storm surge as the proximate cause. The new normal of wilder weather puts even more stress on already creaky public transportation systems.

By Jose Martinez. Originally published at The City on July 9, 2021

Even on a dry day, the MTA says it pumps 14 million gallons of water out of subway stations.

But on Thursday, as a month’s worth of rain deluged the city inside of two hours, the vulnerability of the subway went on full display in videos of commuters wading waist-deep into pool-like stations.

The Dyckman Street station on the A line in Inwood took on 28,000 gallons of water, the MTA said, while the B and D line’s Tremont Avenue stop in The Bronx was flooded by 15,000 gallons.

“If the rain is coming down at 100 gallons a minute and the pumps are 50 gallons a minute, you’ve lost the battle,” said Robert Paaswell, a distinguished professor of engineering at the City College of New York.

The sudden soaking of stations in Upper Manhattan and The Bronx, which typically do not experience heavy flooding, underscored the exposure of a nearly 117-year-old subway system not built for the extreme weather wrought by climate change.

The downpour also highlighted the resiliency challenges still facing the MTA and the city at large close to a decade after Superstorm Sandy swamped stations, tunnels and railyards.

“This is a teachable moment,” said Lisa Daglian, executive director of the Permanent Citizens Advisory Committee to the MTA. “Unfortunately, teachable moments tend to come from other people’s misery.” 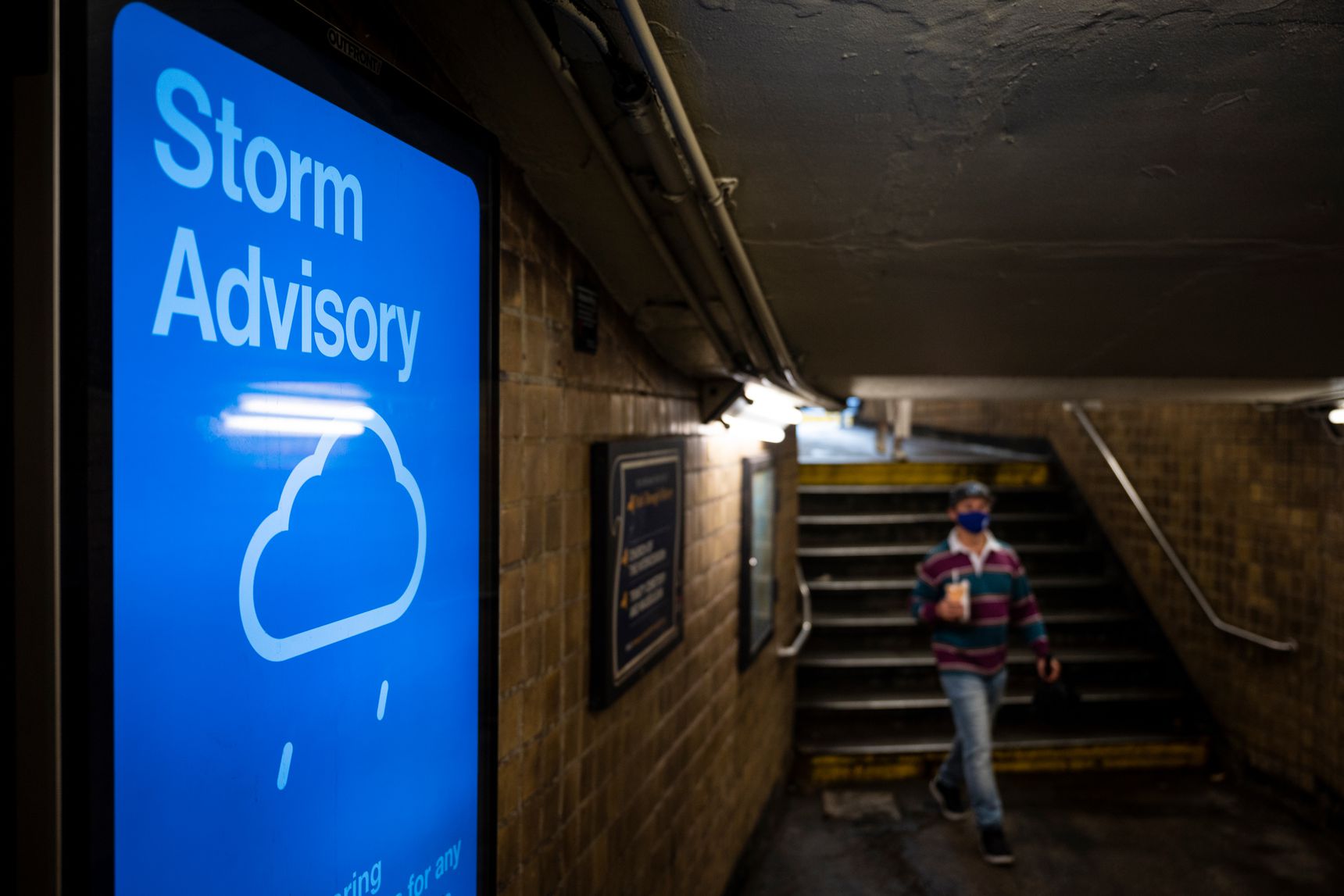 The MTA displayed a warning about rain inside the 157th Street Street station in Manhattan Friday morning.Hiram Alejandro Durán/THE CITY

Transit officials said Thursday’s flash flooding — which led to service being suspended for hours along the A line — overwhelmed the hundreds of pumps in the subway system, many in locations where workers had not been posted in advance.

Flooding From Street to Tracks

A transit source said the storm caused 110 scheduled trips to be canceled and 116 trains to arrive late. The rain also added to the mess at flooded stations as crews encountered obstacles while en route.

“They were trapped in traffic and because of closed roads,” said Sarah Feinberg, interim president of New York City Transit. “Because obviously, they’re trying to move pump trucks and equipment to those locations. It’s not like they can just bail out and walk.”

That was on top of the city’s drainage system already being pushed to its limits.

“If some of the gutters are not free of leaves or garbage, you have extensive flooding,” Klaus Jacob, a geophysicist at Columbia University’s Earth Institute, told THE CITY. “And when street flooding occurred in this mini valley in Upper Manhattan, the subway system essentially became a default sewer system.”

Prior to Sandy, Jacob had warned that the transit system had been “extremely lucky” at avoiding crippling damage from a major storm.

“I’m disappointed that the political process hasn’t recognized that we’re playing Russian roulette,” he said in a New York Times Magazine article one month before the 2012 superstorm.

The MTA has since embarked on a federally funded $8 billion push to strengthen underwater tunnels that flooded during the storm, along with protecting railyards and stations in flood-prone sections of the city.

Those efforts include installing floodwater protections at more than 150 station entrances and at 2,200 sidewalk grates, where water can pour into stations. Some stations in Lower Manhattan, where Sandy caused extensive damage, have vault-like doors that protect stations and rooms housing critical equipment. The section of the A line in the Rockaways, knocked out of service for months after the 2012 superstorm, has since undergone years of repairs.

Part of a ‘National Crisis’

Still, THE CITY reported in April that dozens of those projects designed to protect against future catastrophic weather events remain unfinished — including erecting miles of protective walls around subway yards in Upper Manhattan and Coney Island.

Jacob, who has done some pro bono work for the MTA on climate change resiliency, credited the agency for developing “very comprehensive plans” to protect transit infrastructure after the 2012 superstorm. But he said many of the “gadgets” come with a catch.

Some subway system ya got there. This is the 157th St. 1 line right now. @NYCMayor @BilldeBlasio pic.twitter.com/xyfTAUPPNu

“When they perform as designed and planned, then actually the reduction of inflow of water is fantastic,” Jacob said. “The problem is that many of those devices need crews to go there and activate them or install them.”

Paaswell, a former executive director of the Chicago Transit Authority, said that despite the MTA’s efforts to stem flooding, there is no way to fully flood-proof the subway system.

“They’re doing what they can,” he said. “But it’s like in California — if there’s an earthquake you can’t get ahead of it.”

The MTA’s 2015 to 2034 “Twenty-Year Capital Needs Assessment” and the New York Metropolitan Transportation Council’s “Plan 2045” both cite the need to improve the transit system’s resilience against major storms.

In addition, a September 2007 MTA report highlighted soft spots in the subway system after an August storm earlier dumped 1.7 inches of rain in less than an hour, disrupting service on every line during the morning commute.

Daglian said the lessons learned from earlier storms could have lessened the damage Thursday, but said transit systems face a “national crisis” when contending with extreme weather.

“There really needs to be a focus in the transportation legislation being developed now on proactive resiliency work to anticipate future problems,” she said. “That’s so as to not just respond to areas where there have been issues in the past.”