It appears that even economists are starting to recognize that changes in industry practice that managers and stock touts like to laud as innovation often aren’t beneficial but are extractive. Recall that Paul Volcker deemed the ATM to be the only financial industry innovation he’d ever seen. And as we pointed out in ECONNED:

But opacity, leverage, and moral hazard are not accidental byproducts of otherwise salutary innovations; they are the direct intent of the innovations. No one was at the major capital markets firms was celebrated for creating markets to connect borrowers and savers transparently and with low risk. After all, efficient markets produce minimal profits. They were instead rewarded for making sure no one, the regulators, the press, the community at large, could see and understand what they were doing.

It’s becoming evident that the same principles apply in other fields. This article debunks the idea that the opioid crisis was primarily or even significantly the result of depressed deplorables taking to self-anesthesitizing. Instead, as others have charged, the pill pushers got to be very good at creating addicts.

Over 90,000 Americans died from opioids in the year ending November 2020, bringing the death total since 1999 to over 850,000. This column argues that rather than rising demand for opioids for relief from pain or despair, it is supply-side innovations in the legal and illegal drug markets that have been the main driver of the opioid epidemic. The opioid cycle is a cautionary tale about how technological innovation can go terribly awry, and calls for more collective scepticism about innovations that allegedly cleanse pleasure-inducing drugs of their addictive properties as well as stronger penalties for companies that mislead the public about the risks of their products.

Over 90,000 Americans died from opioids in the year ending November 2020,  bringing the death total since 1999 to over 850,000.1 Opioids have killed far less quickly than COVID-19, but the scale of the carnage is similar. Opioid mortality is a significant reason why Americans have stopped living longer lives, as first highlighted by Case and Deaton (2015).

There are two competing perspectives about the cause of the opioid explosion, and they lead to different policy prescriptions.  One view emphasises the demand for opioids which has perhaps risen either because of an epidemic of physical pain or economic traumas such as inequality and joblessness.  To fix the epidemic then requires addressing those root causes, which could require fundamental reforms of our economic system.  The alternative view is that supply-side innovations in the legal and illegal drug markets increased opioid consumption.  That possibility leads to calls for tighter restrictions on prescribing and access.

A recent paper of ours (Cutler and Glaeser 2021) finds that while both theories have some validity, the supply-side explanation is far more important (see also Maclean et al. 2021).

Physical pain certainly predicts who got opioids. In the 2009-2010 wave of the Medical Expenditure Panel Survey, about 60% of people reporting two or more painful conditions, such as rheumatoid arthritis or interverterbral disc disorders, said that they had received two or more opioid prescriptions during their 2.5 years on the panel. Only 10% of individuals with no painful conditions and 20% of individuals with one painful condition had received two or more opioid prescriptions. Similarly, the share of a county’s population receiving disability insurance in 1990 or the share with end-stage cancer (Arteaga and Barone 2021) strongly predicts the flow of opioids and opioid-related deaths across place between 1997 and 2010.

But the national opioid epidemic cannot be explained by a secular increase in physical pain. The share of Americans reporting two or more painful conditions increased only slightly between 1999 and 2009. The number of emergency department visits for injuries declined over that period, and so did the share of Americans who reported moderate or severe pain. In our analysis, we estimated that changing levels of reported pain can explain only one-fifth of the increase in opioid use. If we control for pain that is severe enough to interfere with work, we find that only explains 4% of the rise in opioid use.

While opioids are meant to treat physical pain, many social scientists, including Case and Deaton (2020) themselves, have emphasised that economic dislocation can led to despair, which in turn can push people towards opioids. Yet opioid shipments were rising most quickly between 1999 and 2006, and Gallup data shows little change in life satisfaction during those years.  Life satisfaction dropped during the Great Recession and then rose again after 2012, but those data don’t correspond to the time series for opioid shipments, which peak in 2010 and then begin a secular decline. Moreover, the flow of opioid shipments between 1999-2010 is uncorrelated with the share of people at the county level who report that they are dissatisfied with their lives. The great shift was not in the level of reported pain or in feelings of despair, but in the willingness of doctors to prescribe opioids for pain.

Humans have had a complex relationship with the poppy plant. The harmful effects of opioids have been known for millenia. Yet there are periodic cycles where opioid use skyrockets and many become addicted. Cycles tend to begin with a new way of delivering opioids that is different enough from pre-existing variants that its makers can claim that it comes without risk. Thus, Freidrich Sertuner, an Austrian chemist, isolated morphine in 1804. It was incorrectly seen as being safer than opium. Serturner himself, and thousands of others – including many Civil War veterans – became addicts. Felix Hoffman, a German chemist working at Bayer, discovered heroin in 1897. The company told its customers that “heroin is completely devoid of the unpleasant and toxic effects of opium derivatives”. This claim also was untrue.

After a first optimistic phase, reality sets in and doctors and pharmacists realise the new formulation is not risk-free. Policy actions are often taken to relock the barn door. The Harrison Narcotics Tax Act of 1914 made it illegal to sell certain opiates, even with a prescription. Yet even when doctors refuse to prescribe morphine and heroin to addicts, they leave behind a stock of addicted consumers, many of whom turn to illegal suppliers. The ‘French Connection’ was infamous in the 1970s, though it was not unique.

The current wave of opioid deaths is much like the past. It began when Purdue Pharma began heavily marketing OxyContin in 1996 (Figure 1). The ‘contin’ system delayed the release of the drug into the body, which supposedly provided long-term pain relief and simultaneously alleviated the risk of addiction. Purdue had long been a marketing powerhouse, and it promoted OxyContin’s supposed safety relentlessly.  The company widely broadcast a 1980 letter to the New England Journal of Medicine, which was not peer reviewed and involved only inpatients, claimed that among “11,882 patients who received at least one narcotic preparation, there were only four cases of reasonably well documented addition in patients who had no history of addiction” (Porter and Jick 1990). Their sales pitch fell on fertile soil, in part because of a growing medical movement that focused on alleviating pain rather than just on treating illness.

It did not take long for the first hints of failure to emerge. By the early 2000s, increased opioid-related deaths were noted in Maine, West Virginia, and Kentucky (Tough 2001), all areas with lots of manual labour and thus high rates of pre-existing pain. Deaths rose apace with opioid prescriptions throughout the 2000s. 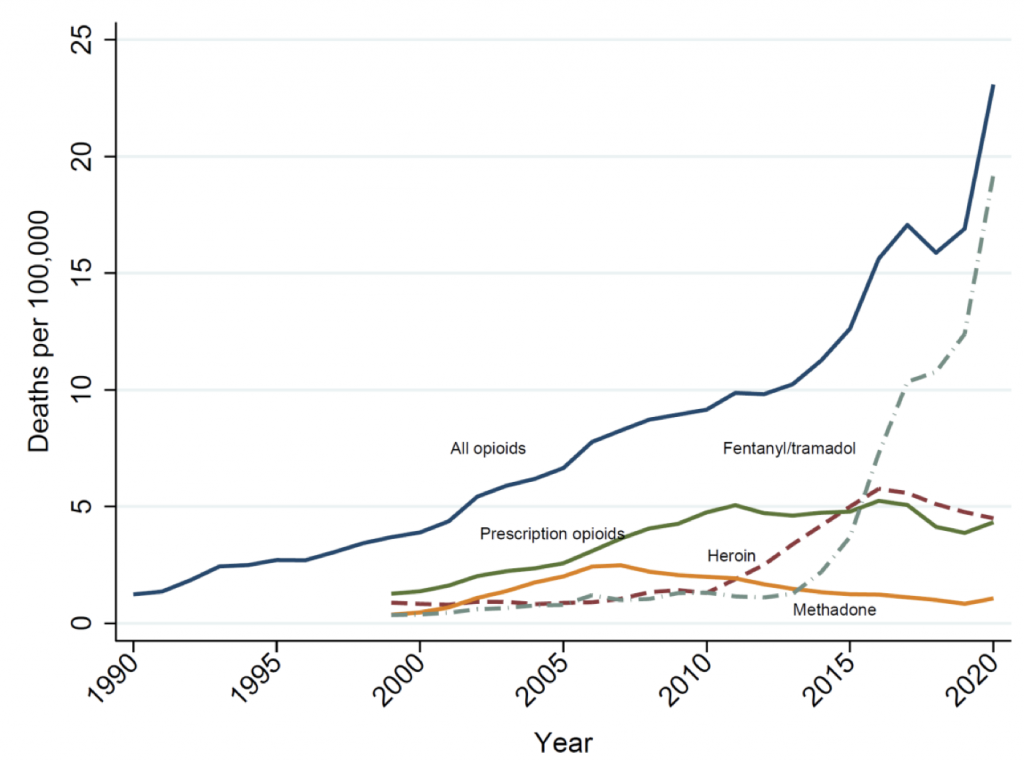 The rising death toll eventually generated a regulatory response.  Under pressure, Purdue Pharma produced an abuse-deterrent form of OxyContin in 2010 that made crushing and injecting the drug harder. As law enforcement cracked down on pill mills and doctors again became skittish about prescribing opioids, users turned to illegal drug markets. Entrepreneurs were more than ready to supply customers. Cicero and Ellis (2015) found that one-third of opioid users switched to other drugs immediately after the reformulation of OxyContin; the majority of those who specified a preferred alternative named heroin. Similarly, Evans et al. (2019) found no impact of the reformulation of OxyContin on overall drug-related mortality. An increase in the number of deaths from illegal substances offset the decrease in the number of deaths from prescription opioids. Quinones (2015) describes the highly efficient distribution network for heroin. Dealers used a system of drivers to carry Mexican-produced heroin right to one’s doorstep.

Yet heroin was not the ultimate endpoint. Fentanyl is more potent still and cheaper to produce; it does not require access to poppy plants. The precursor chemicals to fentanyl often come from China, though Mexico remains an important assembly and distribution point. Because the potency of fentanyl varies greatly from batch to batch, it is particularly deadly. Since 2014, fentanyl has become the most commonly implicated opioid in overdoses.

With the realisation yet again that opioids are not benign, the flow of new opioid prescriptions has fallen dramatically. It shows every sign of remaining low. But there is a large stock of existing users, many of whom will continue to use opioids illegally. Unfortunately, the pandemic made life worse for addicts: social isolation made escape into oblivion particularly attractive; pandemic-induced changes in suppliers made potency more variable; and reduced access to addiction treatment made supervised withdrawal harder. Hopefully, economic normalcy will reduce opioid mortality. That said, addiction treatment will need to be massively scaled up to safely reduce addiction (Lopez 2017).

The opioid cycle is a cautionary tale about how technological innovation can go terribly awry. If we want to reduce the risk of the cycle repeating anytime soon, we will need to change our approach to technology. This will require more collective scepticism about innovations that allegedly cleanse pleasure-inducing drugs of their addictive properties. In addition, we will need stronger penalties for companies that mislead the public about the risks of their products. To be sure, Purdue Pharma will likely cough up billions for its handling of OxyContin. But the Sackler family became fabulously wealthy from opioids, and it is unclear how much the family will be penalised (Lopez 2019). Health is too valuable and addiction too consequential to leave life and death decisions to the market alone.

Authors’ note: Cutler is involved in the multi-district litigation regarding opioids as an expert witness to the plaintiff counties suing opioid manufacturers, distributors, and dispensers.