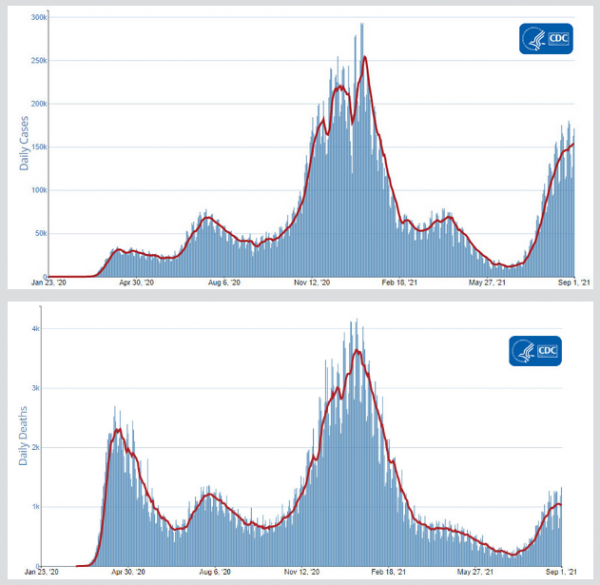 Charts showing Covid daily cases and Covid daily death through September 1. Note the difference in the ratio of new cases to deaths in the left third of the charts (source: CDC)

An uncomfortable fact. We have two problems with Covid in the U.S., not just one. They do overlap, but each on its own is responsible for the persistence of the virus among us.Let me explain.

‘Let’s You and Him Fight’

“I can hire one half of the working class to kill the other half.”
—Jay Gould (cited here)

First, people who are virulently anti-vaxx are being media-stirred to be even more anti-vaxx, because “freedom,” with new rebels added by the day. These people would exist anyway, but not in these numbers, except for the culture war that:

Once again, she was right

This was written after the January 6 riot, but note that it targets “Trump supporters,” meaning all Trump voters, including those who voted Republican just because they couldn’t stomach mainstream Democrats.

To put a number to it, that comment tars close to 75,000,000 voters out of the total voting pool of 160 million Americans. That’s a lot of people to disdain.

And this remark is certainly not alone. From just this month:

When Hilary Clinton told America that Donald Trump’s supporters were a basket of deplorables, she was right. What she failed to mention was just how damn proud of it they are!

It was wrong for Hillary Clinton to say half of Trump’s supporters belong in a basket of deplorables. They all do.

You get the idea. Half of the voting public is being driven up to hate the other half, and each side happily participates. As a result, we have a war that will never end unless those promoting it stand down. Which they won’t.

#ThankYouHillary for coining the term “Basket of Deplorables”. We wear that like a badge of honor.

…and made treating right-wing voters as if they were “deplorable” a badge of membership on the other.

Sending my horse into the feed store to buy ivermectin for me. Works every time.

…and this, from the queen of mainstream anti-Trump orthodoxy…

…which freely conflated using the horse version of ivermectin with using the FDA-approved, known-safe people version available in pharmacies.

So pharmacies are all now requiring dx codes for IVM. Wont fill if c19 related. Naturally if you are concerned about use of veterinary products, what you want to do is aggressively cut off human grade use under medical supervision. This sort of strategy has always worked out well

It’s impossible not to conclude that the pharmacy above is responding to Democratic ecosystem orthodoxy and violating its duty as pharmacists to do it. Reminds one of those (deplorable) days when right-wing pharmacies wouldn’t fill birth control prescriptions.

Because of all this, we may be closing in on the maximum percentage of Americans who will be vaccinated, until a greater enough number of deaths — tragedies that touch a great many more families and friends — lays all of us low and humbles the violently angry on every side.

Clearly, one hopes and prays not to see that outcome. Which sadly means one hopes this war won’t end.

Moderna, Pfizer, and AstraZeneca do not require that their vaccine prevent serious disease, only symptoms.
—Dr. William Haseltine

But all this public panic, anger and shaming of the unvaccinated by the vaccinated — what the Sun-Times calls “the pandemic of the unvaccinated”, for example — hides another fact. The Covid vaccines, as good as they are, were not designed to prevent infection in the first place, only symptoms.

This, from September 2020, was written by Dr. William Haseltine, formerly of the Harvard Medical School and a hero in the fight to genetically characterize AIDS (bio here and here):

Prevention of infection must be a critical endpoint. Any vaccine trial should include regular antigen testing every three days to test contagiousness to pick up early signs of infection and PCR testing once a week to confirm infection by SARS-CoV-2 test the ability of the vaccines to stave off infection. Prevention of infection is not a criterion for success for any of these vaccines. In fact, their endpoints all require confirmed infections and all those they will include in the analysis for success, the only difference being the severity of symptoms between the vaccinated and unvaccinated.

Measuring differences amongst only those infected by SARS-CoV-2 underscores the implicit conclusion that the vaccines are not expected to prevent infection, only modify symptoms of those infected.

It may well be true that these vaccines, to some degree, do protect against infection, but (to use a club brandished against those who recommend studying ivermectin) no clinical studies, to my knowledge, have established that, or have established the degree of that protection.

It’s certainly true that the world wanted these vaccines on the market on the fastest schedule possible. And it’s also true that they have saved a great many lives. Just look at the ratio of infections-to-deaths prior to the vaccine rollout, and the same ratio afterward (chart above).

But it is also true that it’s not just the unvaccinated who are infecting the vaccinated, since both vaccinated and unvaccinated can be Covid carriers and spreaders.

Which means that, even if the world were 100% vaccinated with these vaccines, the vaccinated who host the virus would provide ample breeding ground for variants.

In other words, with these vaccines as our only real defense, we may survive the virus living among us, but the virus among us may survive as well.

We all expect an effective vaccine to prevent serious illness if infected. Three of the vaccine protocols—Moderna, Pfizer, and AstraZeneca—do not require that their vaccine prevent serious disease[,] only that they prevent moderate symptoms which may be as mild as cough, or headache. [emphasis added]

If so, the unvaccinated are not responsible for that. Our global Covid strategy is.