The Wall Street Journal published an in-depth article on how male enrollment at two and four year US colleges is at record low levels, to the degree that some schools are skewing enrollments towards men to keep the gender ratio from being wildly out of whack.

Many of the men interviewed said they didn’t see that getting a sheepskin would be worth the cost. While it is rational not to take on a big debt load if the income payoff isn’t there, why would men be more likely to see college as a bad bet than women? Is it because men (or at least reasonably able bodied men) see that their fallbacks include jobs that can pay solid hourly rates, such as construction, carpentry, plumbing, or electrical work (although it takes training to become competent in the trades)? By contrast, some female-dominated positions that require credentials but not degrees, like certified nursing aides, are not well paid; home health care aides, retail, and waitressing often pay at or not much above minimum wage.

The piece tacitly accepts that many, clearly too many, wind up as student debt slaves, yet politely avoids looking at how that sorry outcome has come about.

Nevertheless, as the article makes clear, many of these men feel unmoored by not having a career path or plan, particularly since society has not let men escape their traditional role of being a provider (both men and women in couples are uncomfortable if the women has the higher income).

The key facts, per the Journal:

Men are abandoning higher education in such numbers that they now trail female college students by record levels.

At the close of the 2020-21 academic year, women made up 59.5% of college students, an all-time high, and men 40.5%, according to enrollment data from the National Student Clearinghouse, a nonprofit research group. U.S. colleges and universities had 1.5 million fewer students compared with five years ago, and men accounted for 71% of the decline.

This education gap, which holds at both two- and four-year colleges, has been slowly widening for 40 years. The divergence increases at graduation: After six years of college, 65% of women in the U.S. who started a four-year university in 2012 received diplomas by 2018 compared with 59% of men during the same period, according to the U.S. Department of Education…. 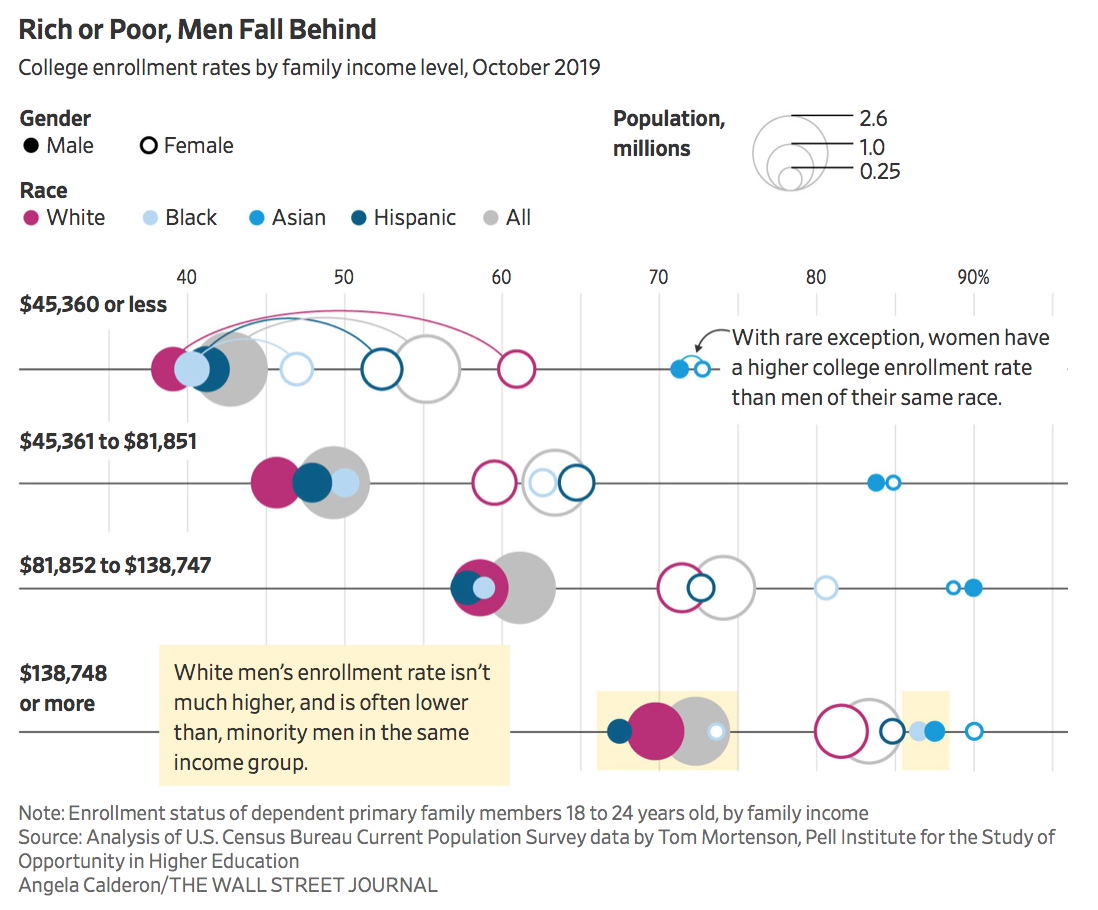 The college gender gap cuts across race, geography and economic background. For the most part, white men—once the predominant group on American campuses—no longer hold a statistical edge in enrollment rates, said Mr. Mortenson, of the Pell Institute. Enrollment rates for poor and working-class white men are lower than those of young Black, Latino and Asian men from the same economic backgrounds, according to an analysis of census data by the Pell Institute for the Journal.

Covid has played a role in this shift. Enrollment fell in 2021, even more among men than women, and the male decline was steeper in two year programs. Experts said a big factor was that working women had to stay home to care for children when schools went to remote learning, and many turned to their sons to help meet household budgets. Some of the ones in or about to start college quit.

But this trend was well underway before the pandemic, so the Journal looks for additional explanations:

Social science researchers cite distractions and obstacles to education that weigh more on boys and young men, including videogames, pornography, increased fatherlessness and cases of overdiagnosis of boyhood restlessness and related medications.

Men in interviews around the U.S. said they quit school or didn’t enroll because they didn’t see enough value in a college degree for all the effort and expense required to earn one. Many said they wanted to make money after high school.

In the Journal comments section, many readers went the Jordan Peterson route, arguing that the near-pervasive view in higher educational institutions that patriarchy was a major source of societal ills made them a male-hostile environment, so it should be no surprise that men were less keen about enrolling than they used to be.

But we don’t hear much of that sort of thing from the men the Journal interviewed. Instead, they seem to want to head in a direction but have no idea where to go. A few of their examples:

Daniel Briles, 18 years old, graduated in June from Hastings High School in Hastings, Minn. He decided against college during his senior year, despite earning a 3.5 grade-point average and winning a $2,500 college scholarship from a local veterans organization.

He took a landscaping job and takes home about $500 a week. Mr. Briles, a musician, also earns some income from creating and selling music through streaming services, he said, and invests in cryptocurrencies. His parents both attended college, and they hope he, too, will eventually apply. So far, they haven’t pressured him, he said.

“If I was going to be a doctor or a lawyer, then obviously those people need a formal education. But there are definitely ways to get around it now,” Mr. Briles said. “There are opportunities that weren’t taught in school that could be a lot more promising than getting a degree.”

Many young men who dropped out of college said they worried about their future but nonetheless quit school with no plan in mind. “I would say I feel hazy,” said 23-year-old Jay Wells, who quit Defiance College in Ohio after a semester. He lives with his mother and delivers pallets of soda for Coca-Cola Co. in Toledo for $20 an hour.

“I’m sort of waiting for a light to come on so I figure out what to do next,” he said.

Men as a whole are lagging women even before college:

Men dominate top positions in industry, finance, politics and entertainment. They also hold a majority of tenured faculty positions and run most U.S. college campuses. Yet female college students are running laps around their male counterparts.

The University of Vermont is typical. The school president is a man and so are nearly two-thirds of the campus trustees. Women made up about 80% of honors graduates last year in the colleges of arts and sciences.

One student from nearly every high school in Vermont is nominated for a significant scholarship at the campus every year. Most of them are girls, said Jay Jacobs, the university’s provost for enrollment management…

The young men who enroll lag behind. Among University of Vermont undergraduates, about 55% of male students graduate in four years compared with 70% of women. “I see a lot of guys that are here for four years to drink beer, smoke weed, hang out and get a degree,” said Luke Weiss, a civil engineering student and fraternity president of Pi Kappa Alpha at the campus.

The article concludes by contending that women have a better support system in the form of 500 women’s centers across the country, and that there’s resistance for providing men with similar help. I’m in no position to judge, since I have an aversion for groups, plus these women’s centers have incentives to proclaims themselves as effective, whether they were or not.

But there is a more sobering way to look at this trend. If the Jackpot is nigh, fancy degrees won’t offer much protection from the disruption.1 The men’s lack of a sense of direction may actually be an accurate reading that no career path is secure or durable, so why invest much in one?

1 The reality is in really bad times, medical skills are always highly valued. People will barter for care.