Yves here. Retirees are typically worried if their limited incomes are losing too much ground to inflation. Wolf Richter argues that the upcoming Social Security increase will fall short of inflation. Mind you, that’s what it’s been designed to do as a result of “reforms” implemented in the early 1990s. What I wonder is how the mix of goods showing hefty price increases (new and used cars, lumber, food) matches up with the typical senior consumption basket. Seniors do eat but they tend to underconsume home renovation and car purchases, for instance.

Among the inflation data released today by the Bureau of Labor Statistics was the Consumer Price Index for All Urban Wage Earners and Clerical Workers (CPI-W), which is used to calculate the Cost of Living Adjustment (COLA) for Social Security benefits. 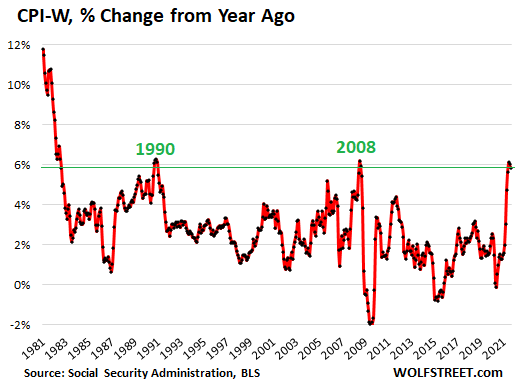 By comparison, the regular headline inflation number that was released today, CPI-U, rose by 5.3% year-over-year.

The COLA to be applied to Social Security benefits starting in January 2022 is based on the average year-over-year percentage increase of CPI-W in July (6.0%), August (5.8%), and September (to be released a month from now).

When the September value of CPI-W is released in about a month, we can estimate with some accuracy what the COLA for 2022 will be (red = estimate based on actual July and August and September projection of 5.6%): 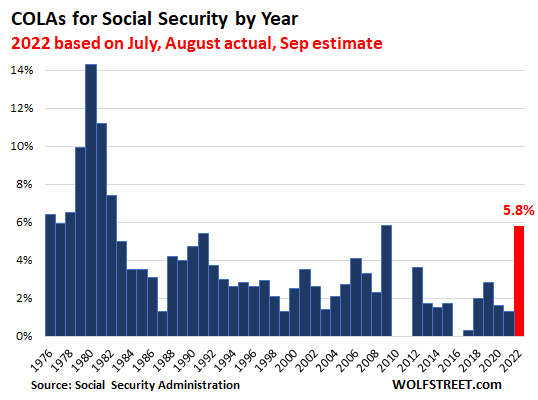 While this type of COLA will provide some relief from the price increases that have been gnawing away at fixed incomes, it will still be insufficient to compensate for the surging costs that individuals may face in housing and other major expenses, depending on their situation and location.

If the beneficiary rents in a city where rents have been soaring in the double digits, a 5.8% COLA won’t go far. If a beneficiary drives a lot, the 43% jump in gasoline prices is going to hurt. Used vehicle prices are up 32% from a year ago, new vehicle prices 7.6%.

Housing costs account for nearly one-third of the regular CPI. But the index for housing costs has been repressed by the method in which it is calculated. The index for rent rose only 2.1% and the index for the costs of homeownership rose only 2.6%, while home prices have soared at rates not seen in the decades for which we have data: 23% according to the National Association of Realtors, and 19% according to the Case-Shiller Index (I explain the disconnect in housing inflation and CPI with a stunning chart).

Then there are healthcare costs, which can be a major issue, despite all the parts of Medicare.

The COLA for 2021 was only 1.3%, which was based on the average of CPI-W in July, August, and September 2020, when CPI readings happened to be very low. So, given the price surges in 2021, that lousy 1.3% COLA this year is leaving many people deeply in the hole. And now, a lot of big expenditure categories have already outrun what might be a 5.8% COLA next year.

Inflation means the dollar loses purchasing power. And over time, COLAs will be purposefully insufficient to compensate beneficiaries for the actual loss of the purchasing power of the dollar as encountered in real life. If Social Security payments are the only source of income, actual inflation, as encountered in real life, will nearly guarantee a continual slow reduction in the standard of living.

For this reason, it’s important to have a nest egg with a combination of assets, and/or create or maintain an additional income stream for as long as possible, preferably something that is fun to do and keeps people active and engaged. Even a small-ish income stream helps out in a major way. Inflation, as encountered in real life, is the enemy of fixed incomes, even if those incomes are adjusted for inflation because those adjustments are likely insufficient to compensate for the actual loss of purchasing power of the dollar.