By Julie Dermansky, a multimedia reporter and artist based in New Orleans. She is an affiliate scholar at Rutgers University’s Center for the Study of Genocide and Human Rights. Visit her website at www.jsdart.com. Originally published at DeSmog Blog 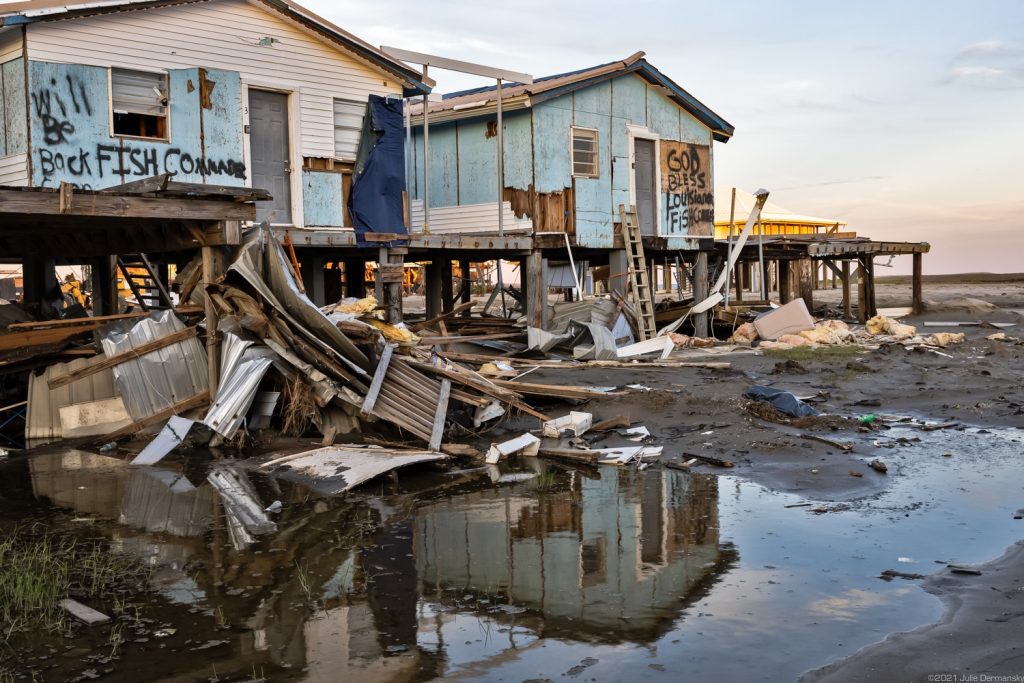 “Blah, blah, blah … Build back better. Blah, blah, blah …” Greta Thunberg, the Swedish climate activist, said this week, taking a jab at President Biden’s signature legislative agenda, which is currently imperiled by disagreements within his own party. The pair of bills — a $1 trillion infrastructure package that passed the Senate with bipartisan support and the $3.5 trillion Build Back Better Act filled with social and climate program expansions — purports to take on climate change, but Thunberg dismissed the legislation in her comments during the opening session of the Youth4Climate event in Milan, Italy, on September 28. She added, “This is all we hear from our so-called leaders: Net zero by 2025. By 2050! Words that sound great, but so far have led to no action.” 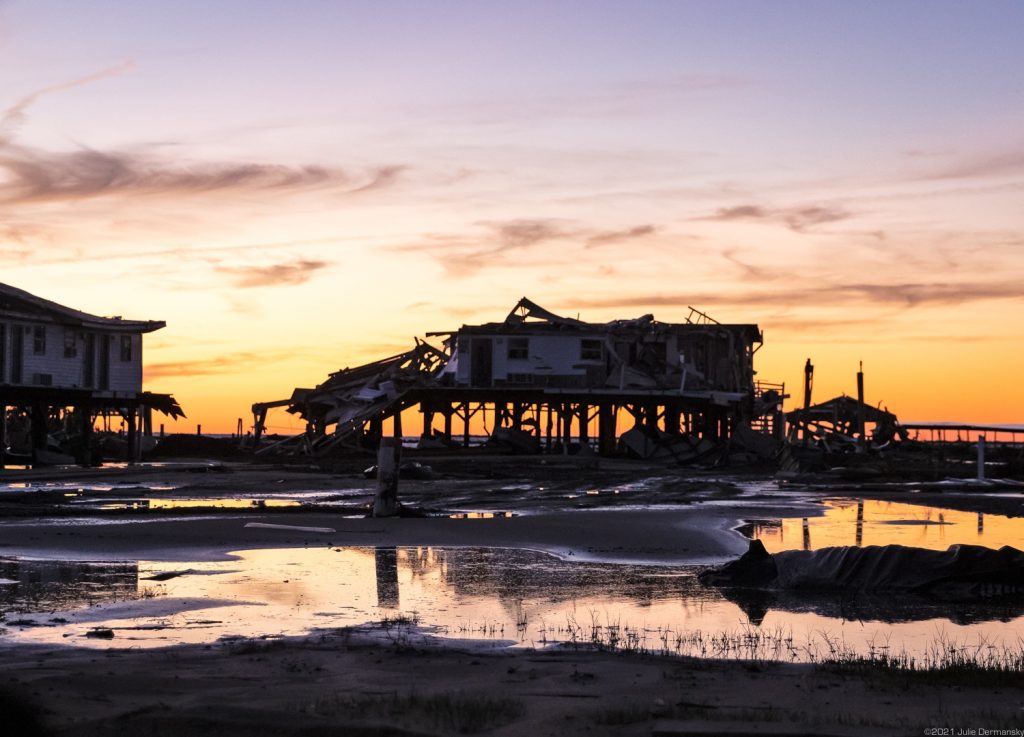 In hurricane-ravaged Louisiana, Traditional Chief Shirell Parfait-Dardar of the Grand Caillou/Dulac Band of Biloxi-Chitimacha-Choctaw Tribe can relate to Thunberg’s words. She has not heard a single word from any politicians about what “building back better” looks like in practice since Hurricane Ida destroyed her home and the homes of thousands of others in south Louisiana just over a month ago. And she is painfully aware of projections from the United Nations that carbon emissions are on track to blow past Paris Agreement goals by 2030, with even more devastating consequences to come from the additional global heating.

In early September, I photographed Parfait-Dardar in her destroyed home in Chauvin, Louisiana, about 70 miles southwest of New Orleans, where her family is facing the impacts of the climate crisis in real time. Later that month, she told me that she sees the continued destruction of coastal communities as a reminder that leaders have done little to protect us from the catastrophic impacts of global warming despite decades of warnings from climate scientists. 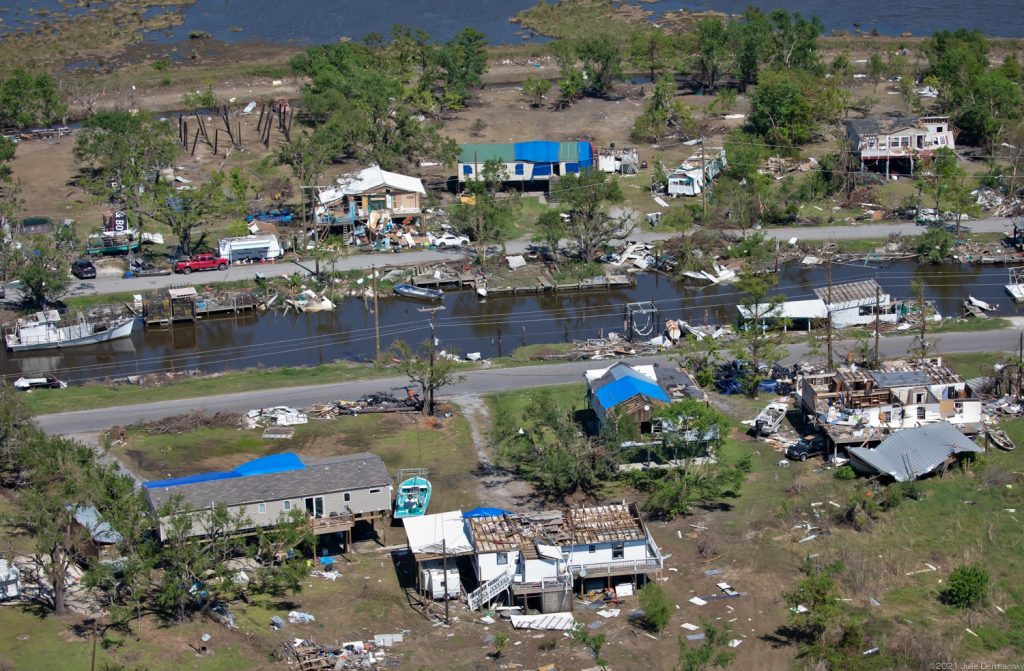 While she is honored to be an appointed member of the Louisiana Climate Initiative Task Force, which Gov. John Bel Edwards established in August 2020, Parfait-Dardar’s service doesn’t give her any special power to help those suffering around her, some of whom are still without power and water. Temporary housing for her and her community has yet to be supplied by FEMA. 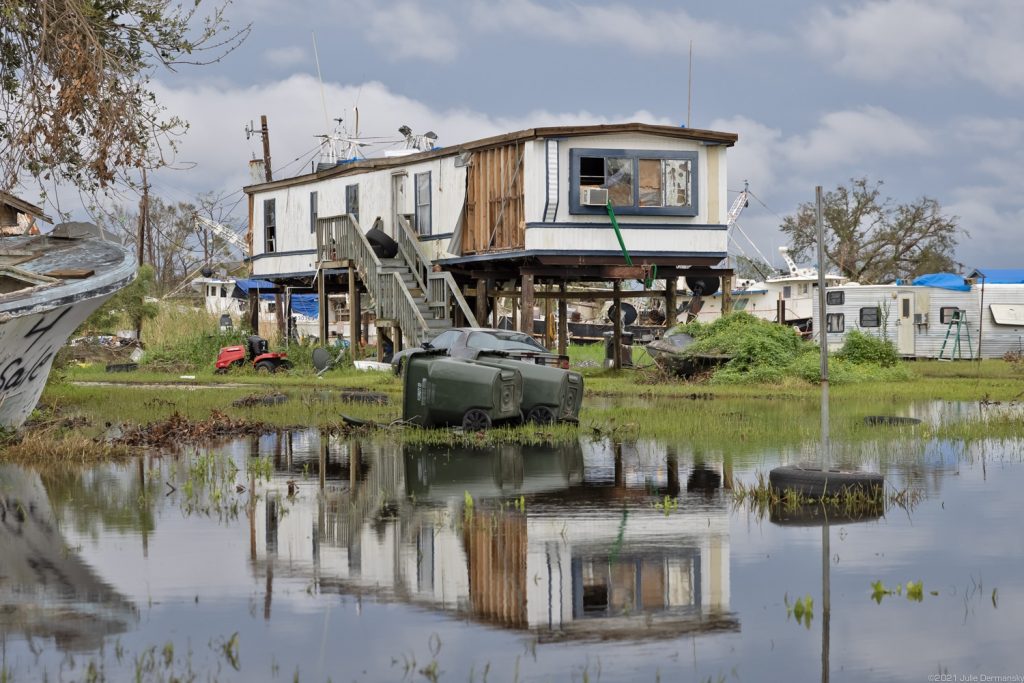 At a special climate task force meeting held on September 29, Chief Parfait-Dardar warned that the destruction caused by Ida “is a perfect example of what is going to continue to happen if we do not listen to the science and the wisdom of traditional ecological knowledge in respecting our environment and planet.” While she sees value in her work on the task force, she told me that her plans to build back better are not reliant on any government.  I have been documenting the impacts of Hurricane Ida in Louisiana for DeSmog since the storm hit the state’s coast as a Category 4 storm on August 29. While funding to rebuild after extreme weather events like Hurricane Ida is not part of the current infrastructure packages, my photographs capture the magnitude of the climate crisis’s impacts on the country’s existing infrastructure. 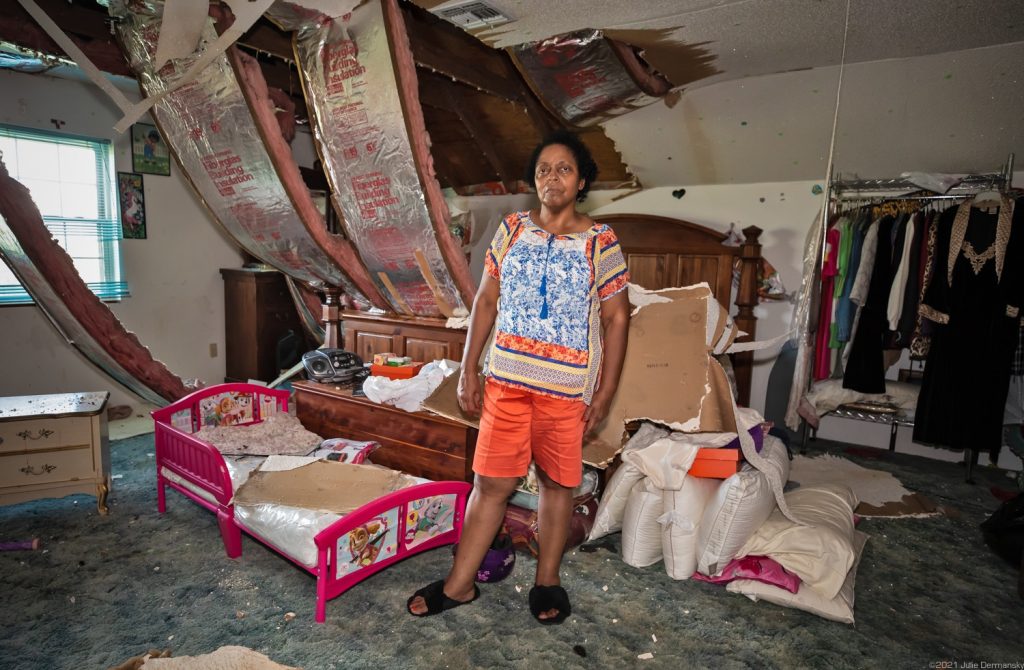 “The key word in climate action plan isn’t ‘plan’ but it is ‘action,’” said Harry Vorhoff, deputy director of the Louisiana Governor’s Office of Coastal Activities, New Orleans, during the recent task force meeting. “We need action now more than ever —and I don’t think it is any more apparent than it is today and action is more achievable when more and more people are saying that that there is no other option than action.”

Where such action will come from depends on whom you ask. Many progressive American politicians support passing both the bipartisan infrastructure bill and the Build Back Better Act as a move in the right direction on climate. However, critics say that funding in both proposals will let the fossil fuel industry off the hook and allow it to create new infrastructure that is incompatible with meaningful climate action. 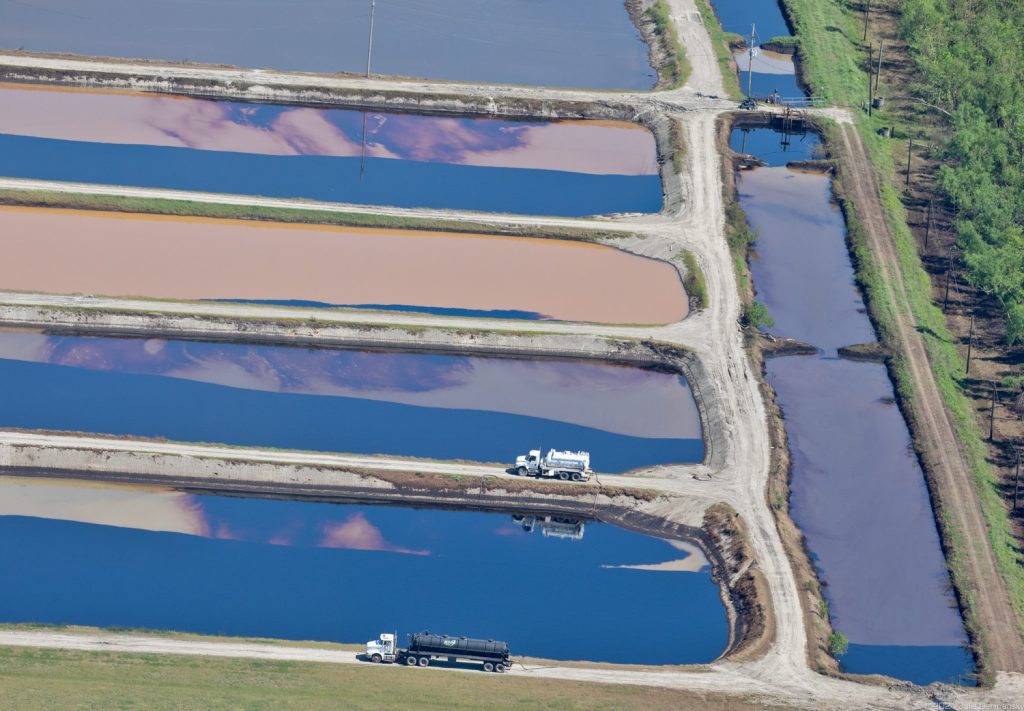 Five advocacy groups, for instance, wrote in a recent letter to Congressional Democratic leaders, “The inclusion of a carbon tax … gives a green light for the biggest climate scofflaws to pay to pollute and maintain a harmful status quo. We urge you to oppose a carbon tax and instead pursue other revenue streams to pay for critical infrastructure, such as eliminating fossil fuel subsidies.”

“Taking action to address climate change can strengthen our communities and our economy,” Gov. Edwards said on May 7 while announcing he is joining a bipartisan group of governors in committing to uphold the provisions of the Paris Agreement.

Gov. Edwards is the type of “so-called leader” Thunberg was referring to in her speech about words but not action. On August 19, 2020, he issued an executive order on climate change, committing Louisiana to net zero greenhouse gas emissions by 2050. Those plans heavily rely on approaches backed by the fossil fuel industry, a powerful lobby in the state, which include carbon capture and hydrogen fuel made from natural gas. Critics warn both will likely add to the problem of climate change. 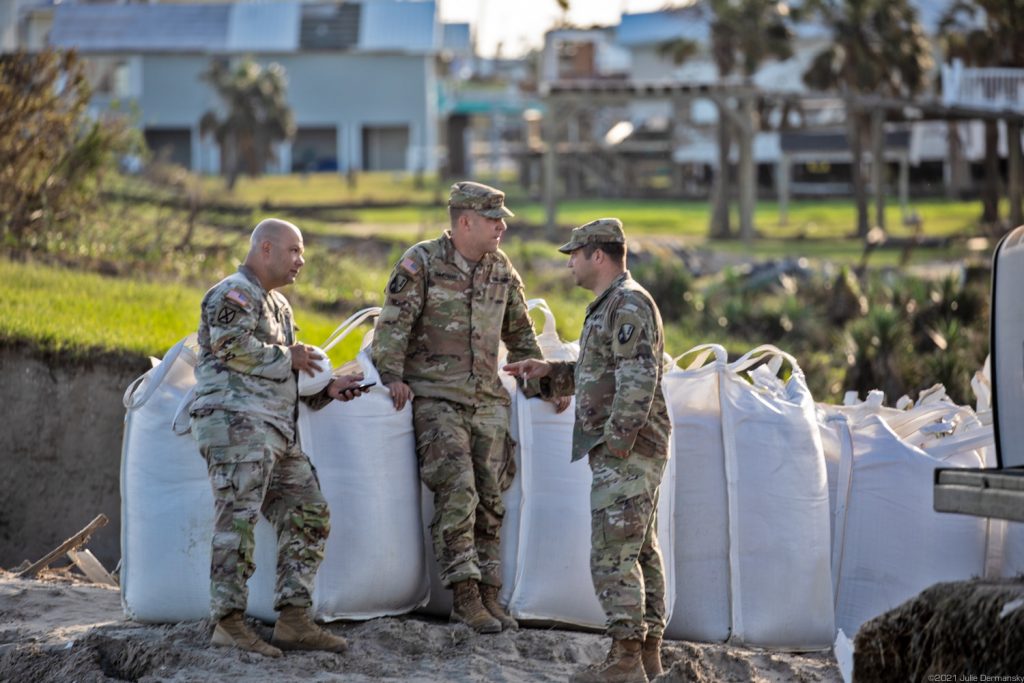 The Build Back Better Act and the infrastructure package do include billions of dollars in funding for climate resilience, allocating tens of billions for flood protection against wildfires and the development of new sources for drinking water in drought-stricken areas of the county, as well as funds to relocate communities in areas threatened by sea-level rise. However, critics warn the pair of bills also direct billions to the fossil fuel industry to create new infrastructure projects for carbon capture and hydrogen fuel made from natural gas, neither of which are commercially viable technologies. Instead, critics such as Pennsylvania State University climate scientist Michael Mann say such approaches give oil, gas, and coal companies a lifeline instead of incentivizing a transition to renewable energy.

“These tactics are straight out of The New Climate War that I write about: politicians using soothing promises of future technology that will magically fix the problem, as an excuse for ‘business as usual’ by carbon polluters,” Mann wrote via email. “The supposed ‘bi-partisan’ infrastructure package could potentially leave us worse off on climate through big giveaways to the fossil fuel industry in the form of subsidies — both direct and indirect — that actually increase the unfair advantage they have over clean energy producers.”

He adds, “What we really need is for congress to pass the ‘Build Back Better’ reconciliation package, which supports meaningful climate action, with the climate provisions intact.” 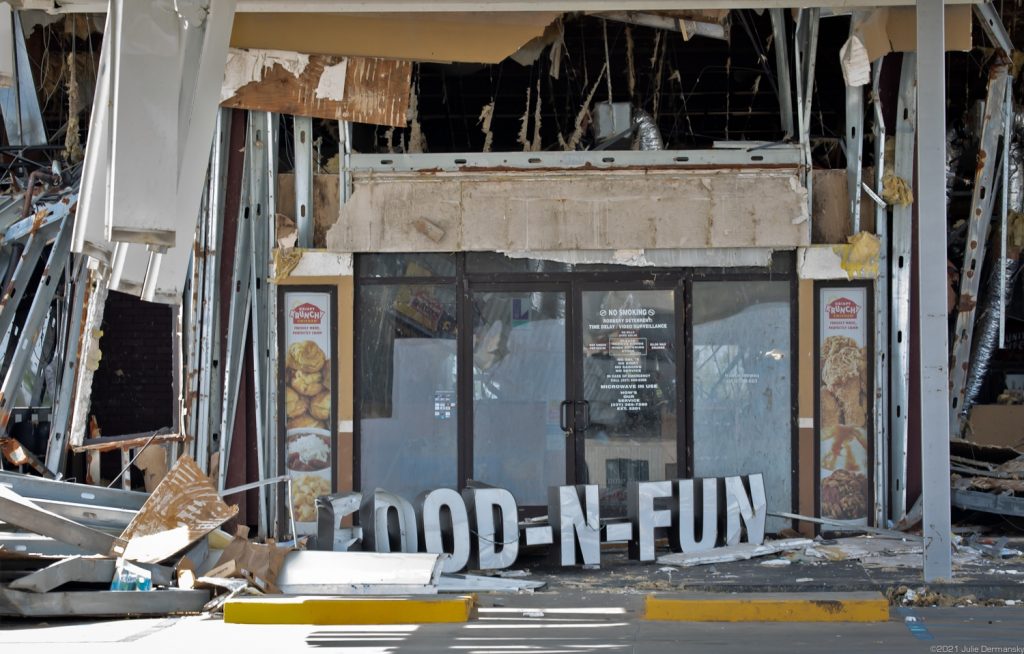 However, some advocacy groups including the Indigenous Environmental Network, Climate Justice Alliance, and Grassroots Global Justice Alliance have come out against both major pieces of legislation since they contend that each one includes some form of fossil fuel subsidies.

“Congress promised our communities they would work to solve the climate crisis and environmental justice once we elected them into office, but instead, we see them fighting to fund fossil fuels and false promises masquerading as climate solutions to the tune of billions of dollars,” a September 30 press release from the three groups states. “Rather than solving climate change Congress is exacerbating it.” They assert that the infrastructure bill has $25 billion slated for new fossil fuel subsidies and the Build Back Better Act includes at least $15 billion. 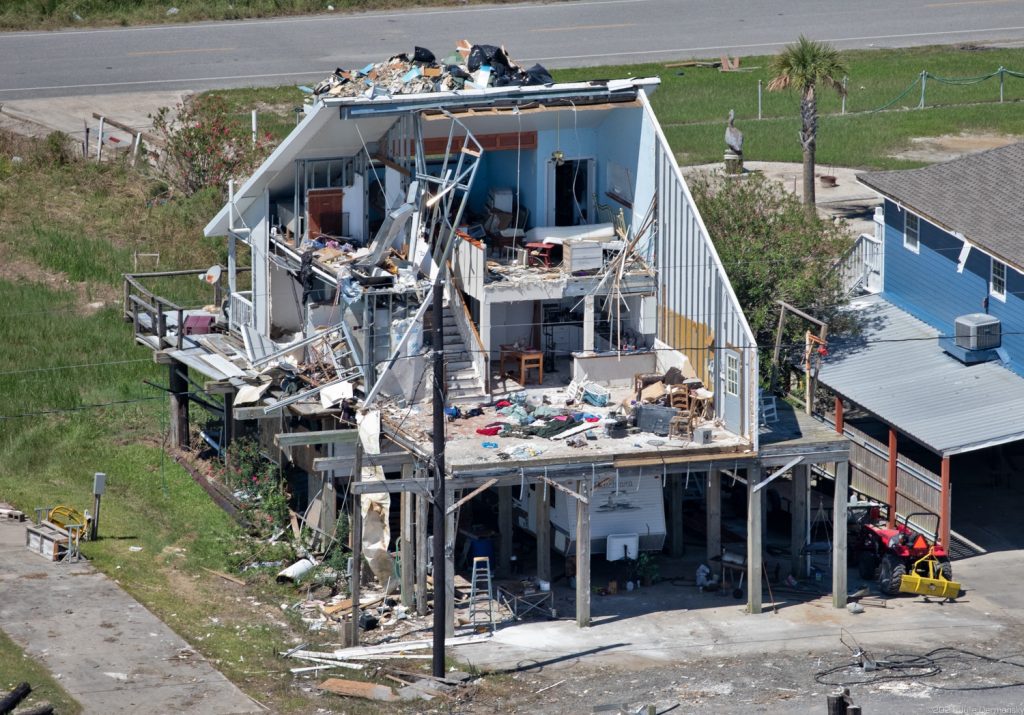 The release identifies what it labels as false climate solutions that would receive direct funding in the two bills, including the 45Q tax credit for enhanced oil recovery (the main use for storing captured carbon emissions), $1.9 billion in loan guarantees for carbon capture pipelines, liquefied natural gas (LNG), and “clean” coal programs, to name a few.

The groups claim that if the proposals pass as is, then “greedy and harmful corporations come out on top” because they say Congress has allowed “life-saving priorities” to be “watered down or completely abandoned through the process” of negotiating an agreement. “We know the true power lies with the people,” the groups state. “Rather than pretend this legislation does not perpetuate injustices to Indigenous, Black, and frontline communities and exacerbate the climate crisis, we will continue to stand with frontline struggles and uplift principles of environmental and economic justice. And we will continue to demand Congress do the same.

Thunberg used similar language in closing out her address to the youth conference: “Hope is not passive. Hope is not blah, blah, blah. Hope is telling the truth. Hope is taking action. And hope always comes from the people.”