Yves here. Admittedly I have a warped sample from here in Alabama, but our aides, who tell stories of the messes in their lives and those of family members (like how catastrophic a car breakdown or emergency root canal can be for finances) are giving me a far more graphic picture of the life of the just-above-poverty class is like. For instance, the mother of one aide’s boyfriend is dying slowly of gangrene. They keep cutting more pieces off her but the end point seems inevitable.

The point for this sort of intro is Wolf Richter keeps banging on about overstimulated consumers. This “overstimulation” has not helped the near poor down here, as far as I can tell. By contrast, I have no idea why it was deemed necessary for me to get a $1400 check. That money should have been used for a business mandate for all workers, including contractors, to take 2 days off for Covid shots and reactions, no questions asked. The businesses have to comply; they’d get reimbursed for missed days for hourly workers and salaried workers working <2 days a week remotely. The rule could also provide for big bounties for whistleblowers who reported violations and firings. Carrots like that would have helped a great deal in increasing Covid vaccinations, which like it or not, is a fixation of current policy.

But aside from the fact that our current leaders seem allergic to doing anything practical, another might be admitting that many people have serious enough reactions to make sick days an important policy measure.

Back when offshoring production by Corporate America to cheap countries was hailed as good for the overall economy, rather than just good for Corporate America, any fears about potentially exploding trade deficits were papered over with visions of the new American Dream: America was great at producing and selling high-value services – the financialization of everything, movies, software, business services, IT services, etc. Exports of these high-value services would make up for the imports of cheap goods. And trade would balance out.

Today, we got another dose of just how spectacularly this strategy has failed. The overall trade deficit in goods and services hit a new all-time worst in August of $73 billion (seasonally adjusted), according to the Commerce Department today.

The trade balance in services deteriorated to a surplus of only $16.1 billion, the lowest since 2011, while imports of goods reached the worst ever $239 billion, and exports of goods edged up to a record of $150 billion, thanks to $33 billion in exports of crude oil, petroleum products, natural gas, natural gas liquids, products from the petrochemical industry, and coal. 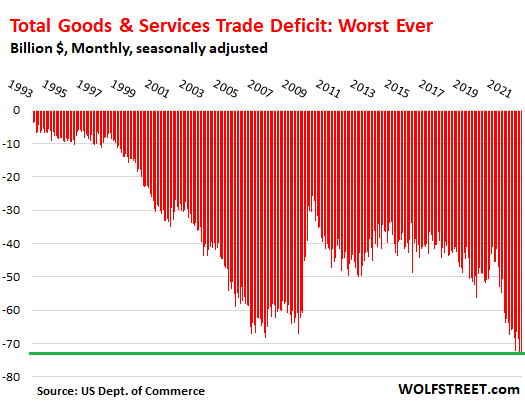 Following the Financial Crisis, the overall trade deficit improved substantially, as imports plunged as consumers cut back on buying imported goods. That was the one major strength in the GDP formula for those months, as nearly everything else cratered. But it didn’t last long.

During the Pandemic, the opposite happened: Consumer demand exploded, fueled by $4.5 trillion in monetary stimulus and $5 trillion in borrowed fiscal stimulus, for the most grotesquely overstimulated economy ever.

It fired up imports of goods and boosted foreign manufacturers and caused the worst supply-chain problems and transportation chaos ever, but did little for what would really move the needle: US exports.

Trade deficits are not a sign of a growing economy, and they’re not a sign of economic strength, but a sign of continued large-scale offshoring of production by Corporate America of consumer and industrial goods to cheap countries.

Imports are a negative in the GDP calculation; exports are a positive. And GDP in Q2 was hit hard by the record trade deficit and disappointed expectations. 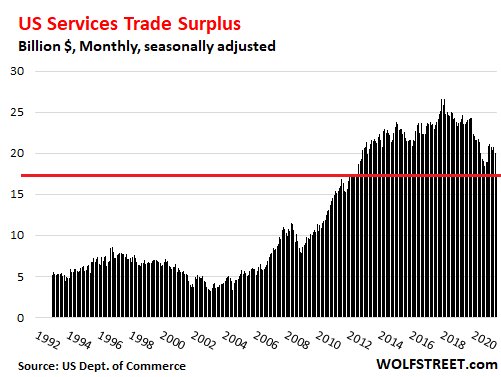 Turns out that in this American Dream-Not-Come-True, it wasn’t the American genius of exporting the financialization of everything, IT services, business services such as consulting and auditing, that would dominate, though they’re clearly very good. For example, Chinese property developer Evergrande, whose shares are traded, I mean were traded, in Hong Kong, was audited by an all-American institution of genius, PwC and got a clean bill of health. So these are truly high-value services exports.

Foreign travelers coming to the US for business, personal, educational, or healthcare reasons; their spending on lodging and other travel expenses in the US, and spending by foreign students on tuition, room, and board in the US are part of “services exports.”

In 2019, travel spending by foreigners in the US was the #1 category of exports and blew away the American genius categories of #2, business services, and the distant #3, financial services.

Then in 2020, foreign tourism in the US collapsed as borders closed. Over the first eight months in 2021, foreign travel spending in the US was still down by 70% from the same period in 2019. And in August, it was down 68%.

Business services, financial services, and fees from the use of intellectual property – the #2, #3, and #4 services exports in 2019 – grew this year, but not enough to make up for the loss in the travel category.

The table shows the major categories of exports of services in August 2021 and year-to-date 2021, compared to 2019. This is the American genius that is supposed to balance out the massive trade deficit in goods (if the 7-column table gets clipped on the right, hold your smartphone in landscape position):

The declining and small surplus in services (green in the chart below) and the huge and worsening deficit in goods (red in the chart below) paint the picture of US trade: Out-of-control imports of goods by Corporate America lead to out-of-control trade deficits in goods despite the surge in exports of products based on petroleum and natural gas. The exports of American genius — services — have never come anywhere near even papering over the massive trade deficit in goods. And it’s not even going in the right direction: 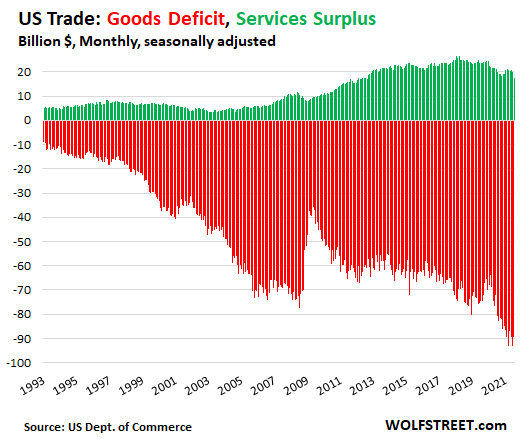