The Wall Street Journal just published a detailed story substantiating what many have suspected of Facebook, that it’s been censoring right-wing content. Admittedly, this finding is in “dog bites man: terrain. Gizmodo had ascertained that through an analysis of “Trending Topics” in May 2016, meaning well before the Trump win led Democratic/establishment screeching about Russian influence and clamping down on opinion suddenly deemed responsible and necessary.

However, Facebook operates on the premise that it can tell howlers to Congress and the public and large, and no one heretofore has been able to disprove its self-serving and dubious claims. So lifting the veil on Facebook’s process, such as it is, for booting content and providers from its platform serves to restrict its ability to prevaricate. It could even lead to a sensible policy or two.

The Journal story relies on internal chats and focuses on Breitbart as an object of Facebook restrictions. The picture is not pretty. Facebook appears to lack any clear-cut policies, which means employees views and arguments held way too much sway. Fox also gets hated-on by Facebook staffers, but there’s no indication in this story that there’s any smoking gun as far as Fox is concerned.

It’s no surprise that Facebook’s efforts at moderation are a train wreck. This tiny site has highly experienced moderators make considerable effort to keep the discussion civil and informative. Moderation does not scale.

And that’s before the wee problem of Facebook having what sure sounds like unduly fuzzy objectives. I find it hard to understand, save its presumably huge legal budget, why Facebook has put itself in the position of intervening in content as much as it does. This degree of control over content makes it hard for Facebook to deny that it’s a publisher, as opposed to a platform.

It’s puzzling that Facebook hasn’t attempted to stare down the thought police and banned content and sites only that peddled hate speech (as in the kind that could be successfully prosecuted) and exhortations to commit violence. Cracking down on misinformation? Seriously? After two plus years of Russiagate fabrications? As Lambert points out, the discussion among scientists on Covid aerosol transmission would have been expunged under the “misinformation” standard because both the CDC and WHO rejected it.

In fact, the Journal story both points out how Breitbart and other conservative sites were down-metered, yet also suggests they were treated too timidly because revenues:

In many of the documents reviewed by the Journal, employees discussed whether Facebook was enforcing its rules evenly across the political spectrum. They said the company was allowing conservative sites to skirt the company’s fact-checking rules, publish untrustworthy and offensive content and harm the tech giant’s relationship with advertisers, according to records from internal Facebook message boards.

The Journal account focuses on its new trove, and hence does not step back to give context. We’ve avoided saying much about Google and Facebook censorship of supposedly right wing and left wing sites because it’s at least as much an effort to winnow the Web down to fewer, orthodox voices But the interests of the officialdom don’t fully align with those of the tech platforms. For instance:

Right-wing sites are consistently among the best-performing publishers on the platform in terms of engagement, according to data from research firm NewsWhip. That is one reason Facebook also is criticized by people on the left, who say Facebook’s algorithms reward far-right content.

Breitbart was included in News Tab, which was launched in 2019. The product contains a main tier with curated news from publishers including The Wall Street Journal, New York Times and Washington Post, which are paid for their content. Breitbart is part of a second tier of news designed to deliver news tailored to a user’s interest, and isn’t paid.

Facebook said it requires sites included on News Tab to focus on quality news reporting and bars those that repeatedly share what it deems misinformation or violate its public list of community standards.

One thing that is sorely missing is what exactly Breitbart was publishing that was deemed to rise to the level of “misinformation” and hate speech. There’s not a single example of a debate over a particular Breibart story and how it wound up. Instead, Facebook performed a study….we aren’t told how…and Breibart got the worst marks in terms of trust: 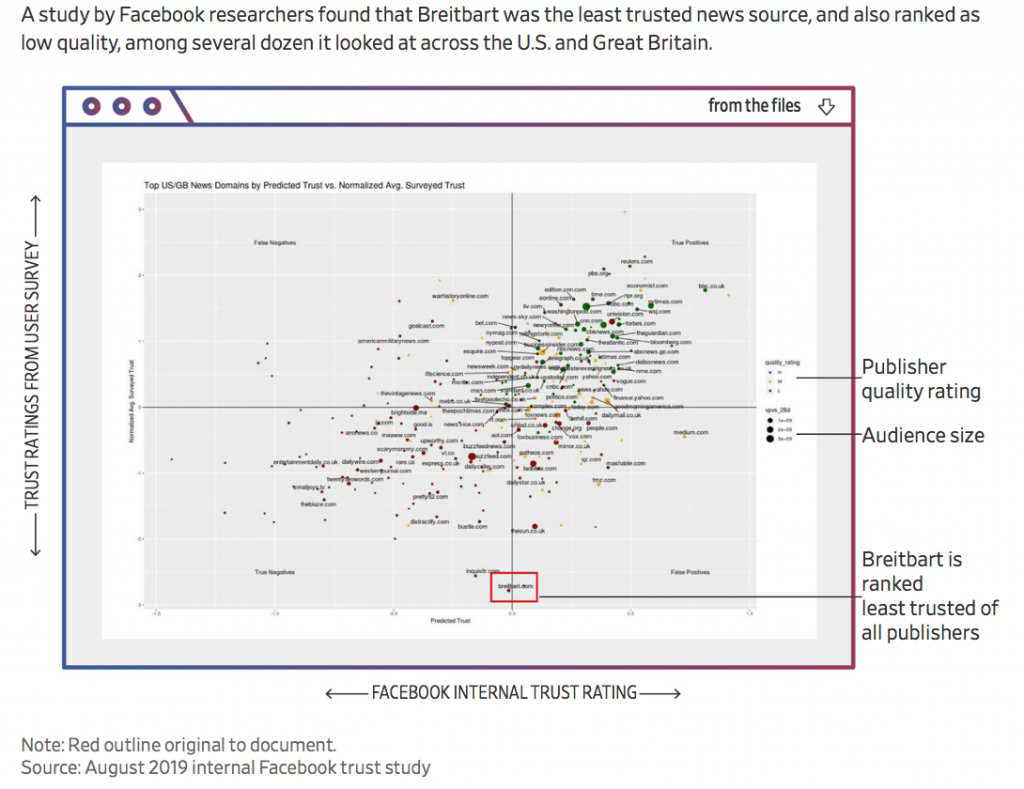 Interestingly, around the time of the George Floyd protests, the Journal found one employee calling for using them to purge Breitbart. The response was that Facebook needed to stick to its algos:

A senior researcher wrote in the chat that it would be a problem for Facebook to remove Breitbart from News Tab for the way it framed news events…because “news framing is not a standard by which we approach journalistic integrity.”

He said if the company removed publishers whose trust and quality scores were going down, Breitbart might be caught in that net. But he questioned whether the company would do that for all publishers whose scores had fallen. “I can also tell you that we saw drops in trust in CNN 2 years ago: would we take the same approach for them too?” he wrote.

What this article never states clearly is the elephant in the room, that Facebook’s users skew conservative, putting the more liberal moderators at odds with them. For instance, Breitbart retorts to the Journal that it is rated better among Facebook’s own readers than many mainstream media publications, which could be true. The flip side is that Facebook went so far as to insert conservative pundits into “Feed Recommendations” allegedly out of fear (I have difficultly believing the fear part, I am sure the operative reasons were mercenary).

The article discusses how many advertisers tried to avoid placement on Breitbart, yet wound up there. Facebook staffers try blaming that on Breitbart machinations. Huh? This sounds like dog ate my homework. And in any event, the advertisers should have stared Facebook about paying for ads they explicitly did not want placed.

There are only two news items mentioned: one a video of Trump reposting a Breitbart clip saying masks were unnecessary and touting hydroxychloroquinine, which was widely viewed across the Internet before being taken down and this one at the close of the story:

….regarding pro-Trump influencers Diamond and Silk, third-party fact-checkers rated as “false” a post on their page that said, “How the hell is allocating 25 million dollars in order to give a raised [sic] to house members, that don’t give a damn about Americans, going to help stimulate America’s economy?” When fact-checkers had rated that post “false,” a Facebook staffer involved in the partner program argued there should be no punishment, noting the publisher “has not hesitated going public about their concerns around alleged [anti-]conservative bias on Facebook.”

Diamond and Silk were able to lobby the third-party fact checker to change the rating down to “Partly False” and, with the help of the managed partner escalation process, all its strikes were removed, according to the posted summary and escalation documents…

The chat conversations the Journal reviewed show that inside the company, Facebook employees demanded that higher-ups explain the allegations.

“We are apparently providing hate-speech-policy-consulting and consequence-mitigation services to select partners,” wrote one. “Leadership is scared of being accused of bias,” wrote another.

This sort of thing is worth litigating? Seriously? First, it’s a pervasive conservative trope to accuse government officials of spending too much on themselves. Calling it hate speech is simpy hysterical.

And it is true that the March 2020 Covid stimulus bill contained $25 million for “salaries and expenses” for the House. But an actual pay increase would require approval of the House Appropriations Committee, and that didn’t happen. The money instead was going for stuff like pay to furloughed food workers and funding to kit out remote connectivity. One could argue that House members should worry about their own computers just like other employees told to work at home, but that wasn’t the point made.

USA Today quotes much greater exaggerations about House spending in the CARES Act from Facebook that appear to have been untouched by the moderators.

Oh, and as part of the CARES Act, which Trump had to sign before it became law, how was this a clean conservative shot even if accurate? Seems like this claim would set up for an easy rejoinder from someone on the other side of the ideological divide. But apparently goodthinking liberals have already written off the deplorables as beyond redemption.

In the hothouse world of the Beltway, the video bloggers Diamond and Silk matter because they are among the few black supporters of Trump, and have earned a perverse badge of honor of being booted from Fox for questioning Covid data (they are now on NewsMax). The Journal also fails to provide some key backstory, that Diamond and Silk claimed that they had been censored by Facebook and had received a message stating their content and message were “unsafe to the community.” That got them a Congressional audience. I am in no position to get to the bottom of this, but Wikipedia strongly insinuates that the Diamond and Silk claims of Facebook downranking are exaggerated if not fabricated.

In other words, Diamond and Silk’s off the mark shot at the House may seem important to the likes of Media Matters, but this is a nothingburger to most Americans. And a lot of people would find it disturbing that Facebook is engaging what looks like sentence-level policing.

I wish the Wall Street Journal would publish all the documents to allow for broader reading and calibration. But not surprisingly, what they’ve served up so far is true to Facebook’s unsavory brand image.