Not only have our soi-disant leaders apparently not learned anything since the start of Covid, they are acting as if the disease will bend to their wishful thinking and commercial/political needs. As we’ll explain below, the Anglosphere press and quite a few public health figures who ought to know better are putting the most possible spin possible on Omicron. This is the worst possible reflex now, just as it was in late January-February 2020.

When you are dealing with an event with potentially disastrous consequences, like a reactor going critical or water at an ocean shore pulling way way way back, potentially signaling the next wave is a tsunami, the prudent response is to assume the worst and act accordingly.

Nassim Nicholas Taleb, with co-authors Joseph Norman and Yaneer Bar-Yam, explained clearly on January 26, 2020 that the possibility of a pandemic (notice they were using the “p” word long before it made its way into respectable conversations) meant it was of vital importance to act quickly and aggressively. I will take the liberty of quoting liberally, but strongly urge you to re (or re-read) the entire short piece in full:

Clearly, we are dealing with an extreme fat-tailed process owing to an increased connectivity, which increases the spreading in a nonlinear way [1], [2]. Fat tailed processes have special attributes, making conventional risk-management approaches inadequate.

The general (non-naive) precautionary principle [3] delineates conditions where actions must be taken to reduce risk of ruin, and traditional cost-benefit analyses must not be used. These are ruin problems where, over time, exposure to tail events leads to a certain eventual extinction. While there is a very high probability for humanity surviving a single such event, over time, there is eventually zero probability of surviving repeated exposures to such events. While repeated risks can be taken by individuals with a limited life expectancy, ruin exposures must never be taken at the systemic and collective level. In technical terms, the precautionary principle applies when traditional statistical averages are invalid because risks are not ergodic.

Next we address the problem of naive empiricism in discussions related to this problem.

Spreading rate: Historically based estimates of spreading rates for pandemics in general, and for the current one in particular, underestimate the rate of spread because of the rapid increases in transportation connectivity over recent years….

Reproductive ratio: Estimates of the virus’s reproductive ratio R0—the number of cases one case generates on average over the course of its infectious period in an otherwise uninfected population—are biased downwards….

Mortality rate: Mortality and morbidity rates are also downward biased, due to the lag between identified cases, deaths and reporting of those deaths.

Increasingly Fatal Rapidly Spreading Emergent Pathogens: With increasing transportation we are close to a transition to conditions in which extinction becomes certain both because of rapid spread and because of the selective dominance of increasingly worse pathogens…

Fatalism and inaction: Perhaps due to these challenges, a common public health response is fatalistic, accepting what will happen because of a belief that nothing can be done. This response is incorrect as the leverage of correctly selected extraordinary interventions can be very high.

Reread the last paragraph. Public health officials are selling a combination of Pollyianism and futility (“we have to learn to live with it”) to rationalize their inability or lack of determination in dealing with Covid. This tendency would be in play regardless, but it’s made worse by public officials’ reluctance to take aggressive protective measures and crimp those normally banner fourth quarter revenues for retail, restaurants, hotels, airlines…the list goes on….as well as dare to suggest that families should prioritize their health over holiday merriment.

Twitter’s tending topics is revealing…in not a good way. I’ve looked at it multiple times over the last 8 hours and Omicron has been notably absent: 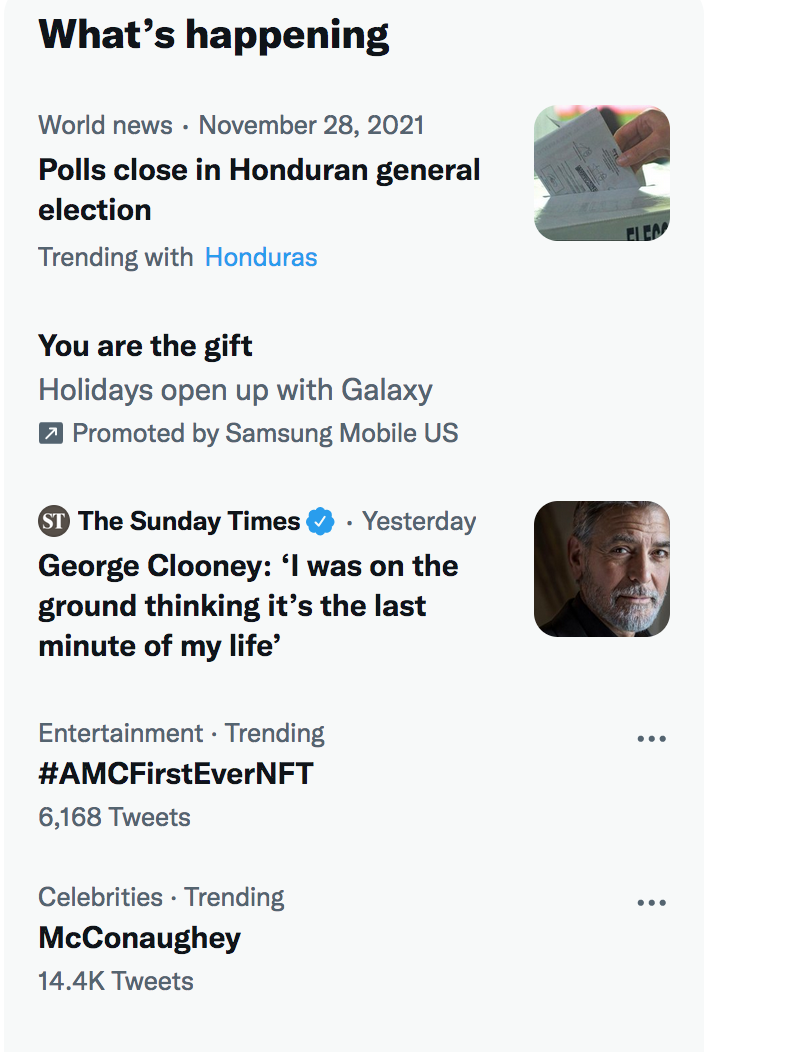 Similarly, there’s been way too much amplification of fake news. We’ve had to deal in comments multiple times with a misleading story in the Torygraph, not a prime venue for science reporting (the Daily Mail is vastly better, it gives straight up detailed but layperson friendly explanations of new papers, for instance) and was quickly picked up elsewhere, that the South African doctor who first sighted Omicron said was producing only tame symptoms. Dr. Angelique Coetzee herself objected to how her words were cherry-picked, but oddly her efforts to correct the reporting got little play. For instance:

A widely-shared quote from a South African doctor, saying Omicron causes only mild symptoms, is being taken out of context. She was referring to a small group of young, healthy people and warned of severe disease in other groups https://t.co/QNf2WGRwAJ pic.twitter.com/hJ3M3VglXW

By contrast, the data from South Africa speaks for itself:

Just a quick look at the big provinces:

Gauteng's average moved past 1000 yesterday in what has been a very rapid rise.
WC, KZN & EC have all turned the corner in the last few days and are now going up. pic.twitter.com/kXa0fLEmLP

But there’s now official happy talk, as opposed to incorrectly constructed happy talk, out of South Africa. From the text provided by Sky News in connection with an interview with South Africa’s COVID-19 adviser, Prof Barry Schoub:

…the Omicron variant is spreading rapidly across the country.

Prof Barry speculated that the sheer number of mutations could lead to the virus being ‘less fit than the Delta variant’ which is known to respond well to vaccines.

GM’s gobsmacked reaction: “How exactly did the mutations destabilize it while making the epidemiological curve going go vertical?”

And for those of you with a strong constitution:

I could barely get through this palaver. The one gratifying part was when the interviewer asked, with evident annoyance, “”Didn’t you say many times that this [Delta] was going to be the major variant we would have to contend with?”

Contrast this with GM’s take, baseddiscussions by experts on Twitter (which like the debates over aerosols, are showing Twitter at its best: real time sharing of information and ideas) and selected sites:

We’ll see what happens, but as things stand at the moment, once this gets into old people in the West, if the properties of that spike sequence indeed turn out to be as expected, there will be a large number of deaths in people with 3 doses and those with two doses 10 months ago are totally cooked. Every scientist who has actually studied the spike the last 20 months and has spoken so far is deeply pessimistic.

It will be at least two weeks before there is neutralization data.

They need to order the DNA, make pseudovirus, then validate it, then run the actual assays. Even working full time, that will take a while. Although the people in South Africa might have started on this quite some time ago.

The words “serotype” and “strain” will be avoided at all costs.

If you start talking about serotypes, you immediately concede that the mass infection policy is foolish, and, given the consequences, outright criminal.

You also risk opening a serious discussion of the one thing that for some mysterious reason has not been touched on at all since the start of the pandemic — the IBV literature. IBV is a chicken coronavirus, quite similar to COVID in many of its manifestations. They have vaccines against it, but it’s a never ending Red Queen game of whac-a-mole against new serotypes and variants, against which previous vaccines don’t work at all. And apparently there are some examples of really drastic evolutionary jumps there that we are yet to see with COVID, but may well do in the future. One can speculate why that has never been discussed — it’s either because nobody cares about veterinary medicine so few know about it (true) or because nobody wanted to talk about it due to the implications. But the people who study coronaviruses do know about it. Which is why none of big names has said anything about vaccines solving this, it attenuating to a common cold, “herd immunity”, or anything of the sort.

IM Doc’s mafia, which heretofore had largely been vaccine enthusiasts, with a few old codgers having reservations about their limited efficacy v. transmissions with Delta, is in a newly sober mood:

My virologist friend in [major city] – not a corona expert – reported to me on Friday that the pants are officially being shat in virology departments all over the country.

And yes – the IBV did come up in a conference I attended on Friday. MIND YOU – not from the speaker but someone in the audience that I did not know. And all the speaker could say is that he was not very familiar with it – but that there were some very disturbing parallels. He went on to add that the corona virus experts he knew were all deeply concerned about this development and that it could be a “game changer”. When the inevitable vaccine question came up – the speaker certainly was no longer RAH RAH RAH like he had been in the past. In fact, he became rather forlorn. I got the idea it is already clear to the smart kids in the room that we have a severe problem.

And even if the optimists turn out to be right about the severity of infection, that’s not that much of a break given how much more transmissible Omicron is, on top of significant and likely complete evasion of current vaccines and monoclonal antibody treatments:

Japan will close its border to foreign businesspeople and students, except those allowed for humanitarian or other special reasons, as concern grows over the omicron variant, NTV reports https://t.co/5jFzeYB05J

Israel is banning all foreigners from entering the country in response to Omicron fears, authorities announced. Pending government approval, the ban is expected to last two weeks. https://t.co/5WXfODWUVM

The UK is as usual not exactly serious:

By far the most important Omicron initiative announced today by @BorisJohnson is the PCR test within two days of arrival in UK and isolation till negative result. But it won’t be much use if, as is possible, Omicron is already seeding here.

Two days after someone arrives is an eternity, and then (unless you are dealing with a super fast lab), it’s 24 hours, more often 48 to get results.

New York has declared a state of emergency and has taken at least one concrete step, which is limiting elective surgeries (the press calls it a ban when it isn’t really). From the New York Post:

The edict curbing non-essential surgeries will kick in for hospitals with a limited capacity — defined as at or below 10 percent of available staffed bed capacity.

The new protocols will take effect on Friday, Dec. 3, and will be re-evaluated based on the latest COVID-19 data on Jan. 15.

And we have this cheery bit of overnight news. On top of UK cases having been revised from 2 to 3, they’ve gone to 9:

I will give an update on the current situation in Scotland, what we know about #Omicron so far, and what we can all do to help contain spread in a Covid briefing with @DrGregorSmith at 10.30am https://t.co/anNoHG7JLy

As we too often say, it would be better if we were wrong, but now is a time when pessimism is your friend.