Wall Street Is Close to Triggering a Climate Financial Crisis Bloomberg. Deck: “And just like 2008, the biggest losers will be those least responsible for it.”

The Scramble for EV Battery Metals Is Just Beginning WSJ

Omicron is spreading at a rate we have not seen with any previous variant. I need to be very clear: vaccines alone will not get any country out of this crisis.
It’s not vaccines instead of masks, distancing, ventilation or hand hygiene.
Do it all. Do it consistently. Do it well. pic.twitter.com/YAVfJXsviQ

Unfortunately, WHO has form. First, this is probably an indicator lagging far behind the spread. Second, Tedros will not pronounce the word “airborne,” and puts ventilation (backed by science) on a par with handwashing (not). Ruling elite failure all the way down, and that’s being charitable.

1/ Why is there such EXTREME RESISTANCE by @WHO, @CDCGov and IPC(*) to clearly state that COVID-19 is a dominantly AIRBORNE disease?

* * *
The airborne hierarchy of needs:

Airborne protections and vaccines in the hierarchy of controls: a health and safety approach to the pandemic. Vaccines are our last line of defence. pic.twitter.com/9u3iiugIQd

Omicron now makes up almost 3% of U.S. Covid cases, according to the CDC CNBC

Omicron and Delta may strike people at the same time and COMBINE to create an even worse Covid variant in the coming weeks, Moderna boss warns Daily Mail. Which has good science writing, so don’t @ me.

* * *
Assessment of a Hotel-Based Protective Housing Program for Incidence of SARS-CoV-2 Infection and Management of Chronic Illness Among Persons Experiencing Homelessness JAMA. “In this cohort study of 259 [persons experiencing homelessness (PEH)], a significant reduction in SARS-CoV-2 incidence was observed during the study period among PEH provided with protective housing compared with PEH in shelters citywide. Improvements in hypertension and glycemic control were also observed; 51% were successfully housed at departure.” CIDRAP notes: “[Protectively] results were compared with those of people staying in shelters, which the authors noted may house as many as 400 people in open rooms.” I can’t find the 400 figure, but it’s well-known that shelters are congregate settings where PEH share are. Hence, it’s remarkable that the article doesn’t mention ventilation; surely that should be a baseline for the sort of NGO-funded operation the article implicitly recommends?

Why will it take China’s Yutu 2 moon rover so long to reach lunar ‘mystery hut’? Space.com

The #SilentStrike today was so powerful that the SAC troops in Mandalay ram into each other at a clear junction, critically injuring 4 of their own. ?#WhatsHappeninglnMyanmar #Dec10Coup pic.twitter.com/J5rHVUPFHd

Once a World Leader, Israel Lags Behind on COVID Vaccinations Haaretz

How did the UK reach 200,000 Omicron infections in one day? FT. Clean living. It pays off every time. –Elmore Leonard

France Approves Controversial Plan to Renovate Notre-Dame Cathedral Smithsonian. I was prepared to hate this, but I unironically like the idea of Louise Bourgeois in Notre Dame very much. I have seen several exhibits of her installations, and she’s terrific (in all senses). Twentieth Century (High) Gothic.

How Taxes Can Support Growth and Reduce Inequality in Latin America and the Caribbean International Monetary Fund. Of all places.

The West’s nightmare: a war on three fronts Ambrose Evans-Pritchard, The Telegraph

Hey SEC! Looking for a way to make hay with a SPAC peddling stablecoins? Francine McKenna, The Dig

Ghislaine Maxwell’s ‘black book’ of contacts thought to include Prince Andrew will not be released during her sex-trafficking trial Daily Mail. “[T]he defense and prosecution in her trial have agreed.”

House Votes to Hold Mark Meadows in Contempt in Defiance of Jan. 6 Probe NECN. Still unclear to me why Merrick Garland is missing in action on all this.

The Commodification of the Wellness Industry Jezebel

Fast food workers are using 911 call logs to draw attention to a hidden “crisis of violence” The Counter. Welcome to Assholistan.

A victory for the NewsGuild of New York:

The Best Workplace Tool For Most People Is Collective Action https://t.co/90ffamIEVT 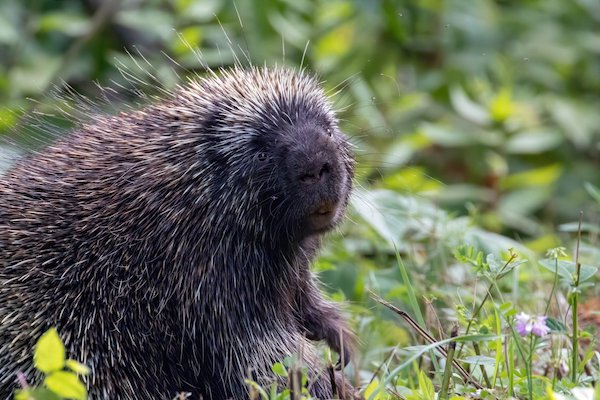 Porcupines’ quills take on various forms, depending on the species, but all are modified hairs coated with thick plates of keratin. This video by Mariette Landman shows what a formidable defense they constitute