There’s certainly lots to object to, from its terrible labor relations to its impact on the environment

I’ll address one aspect of that last issue in this post: Amazon’s use of plastic packaging. The year 2020 saw a huge surge in the company’s use of  plastic packaging, according to a new report by the ocean conservation group Oceana, Exposed: Amazon’s enormous and rapidly growing plastic pollution problem,. From the Oceana press release:

Amazon generated an estimated 599 million pounds of plastic packaging waste last year stemming from the billions of packages delivered by the company during the COVID-19 pandemic. This is a 29% increase over Oceana’s 2019 estimates. Oceana also found, based on data from a peer-reviewed study on plastic waste pollution published in Science in 2020, that up to 23.5 million pounds of this plastic waste entered the world’s waterways and seas. That is equivalent to dumping a delivery van’s payload of plastic into the oceans every 67 minutes.

“Our report found that Amazon’s plastic packaging pollution problem is growing at a frightening rate at a time when the oceans need corporate leaders like Amazon to step up and meaningfully commit to reducing their use of single-use plastic. Amazon has shown it can do this in large markets like India and Germany. It now needs to commit to do so worldwide,” notes Matt Littlejohn, Oceana’s Senior Vice President for Strategic Initiatives.

Plastic is a major source of pollution and is devastating the world’s oceans. Studies have estimated that for species, 55% percent of sea birds, 70% of marine mammals, and 100% of sea turtles have ingested or become entangled in plastic and have found that plastic film is one of the deadliest forms of plastic for marine life.Scientific reports have estimated that only 9% of all plastic ever produced has been recycled [citations omitted].

Now, I get it. We all hate Amazon, but no one wants to catch COVID-19. So I understand why people resort to ordering from the evil empire, rather than schlepping to an old-fashioned bricks and mortar store, or seeking out non-Amazon e-commerce alternatives. The widespread surrender to Amazon is reflected in its sales figures, which in 2020 surged by nearly 40%, to $386 billion.

The next time you’re going to use Amazon, bear the following packaging details in mind (I realize they reflect all global e-commerce, rather than Amazon exclusively, but given Amazon’s dominance of e-commerce, they’re a useful proxy.)

To be sure, Amazon is easy and convenient, but, is there really no alternative? 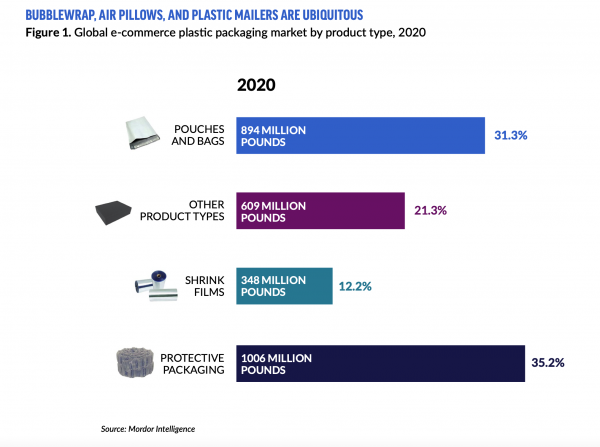 I know from first-hand experience that other companies have eliminated most plastic packaging. Weck, which makes excellent glass jars that I use extensively to ferment and preserve food, relies on crushed cardboard, and double-boxing, rather than plastic bubble wrap and other forms of plastic packaging. I’ve ordered from Weck several times during the past year, and everything has arrived safely.

Amazon could be a leader rather than a laggard in the war against plastics. Instead, it offered a pathetic response to the Oceana report, according to The Guardian:

Amazon, the western world’s largest retailer, rejected Oceana’s figures and said it had overestimated the plastic waste by 300%. It also questioned the model used to estimate the percentage likely to enter the sea. It did not provide alternative figures.

This is laughable. Even cutting the figures back to what the company cops to, that’s still lots of plastic. Oceana has asked Amazon to produce figures for the plastic it generates, but the company hasn’t deigned to comply. According to the Oceana press release:

Oceana has asked Amazon, which disputed Oceana’s estimate last year, to provide data about its plastic footprint but Amazon has so far refused to do so. The amount of plastic packaging waste estimated to have been generated by Amazon would now, in the form of air pillows, circle the planet more than 600 times.

Amazon purports to promote recycling as a viable response to the waste it generates. But when Oceana examined more closely what these recycling efforts amount to, it found that Amazon’s touching faith in the recycling fairy was especially ineffectual. Per the Oceana press release:

Amazon asserts that recycling can help solve its plastic packaging pollution problem, but Oceana’s report found otherwise. Amazon plastic packaging falls into the category of ‘plastic film’ – a material that is extremely difficult to recycle and is not accepted at most curbside recycling programs in the UK, the U.S, and other large markets for Amazon. Most often, it is landfilled, burned, or pollutes the environment, including the oceans.

To address this, Amazon directs customers who want to recycle their packaging to stores with designated drop-off locations through its Second Chance website. Oceana sent secret shoppers into 186 of these stores in 25 cities in the UK and the U.S. Representatives from more than 40% of the stores visited told the secret shoppers they would not accept their Amazon plastic packaging and managers at more than 80% of stores visited did not know Amazon customers were being directed to their stores.

Touting recycling won’t solve the world’s dire plastics waste problem. For starters, it shifts responsibility away from the source of the problem – those who generate and use plastic packaging – to consumers. Unsurprisingly, most plastics aren’t recycled – about 9% of the total amount generated. Some solution!

Instead, Oceana calls for Amazon to:

Alas, I think it highly unlikely Amazon will take action on this issue anytime soon. Jeff Bezos seems rather pre-occupied chasing his space dreams. Instead, some form of government action will be necessary to make the company address the problem. According to The Guardian:

Rachel Johnson Greer, a former programme manager at Amazon, who worked for the company for eight years, said the company would only take action on plastics if governments or a majority of customers demanded it.

On plastics packaging, India has been a leader, and has forced Amazon to stop using single use plastic packaging. The packaging protocol Amazon employs in India – no single use plastics, and instead, reliance on returnable and reusable packaging – could easily be rolled out globally – a single step that would prevent the massive amount of plastic Amazon currently uses from entering the waste stream. According to The Guardian::

Oceana has highlighted the action taken by the retailer in India, where it has eliminated single-use plastic packaging by using paper alternatives, after India’s prime minister, Narendra Modi, and its central government pledged to ban single-use plastics by 2022. The ban was delayed, but a tribunal ruled that packaging was the responsibility of producers, importers and brand owners.

Amazon also announced it would move away from single-use plastic packaging in Germany.

“If the company can do this in India and Germany, they can move away from single-use plastic packaging on a worldwide basis,” Littlejohn said.

How about it Jeff? Could 2022 prove to be the year that Amazon says no to plastic packaging?