Unless dramatic steps are taken, one of the world’s largest cities could face “Day Zero” — when supplies of water run so low that government must begin rationing the precious liquid — as early as 2028.

Many residents of the working class barrio of Azcapotzalco, in the northwestern part of Mexico City, had a very dry Christmas this year. Water stopped flowing to many households on Christmas Day, allegedly the result of an outage of three power stations in an electrical substation that provides power to wells in the neighbourhood. Representatives of Mexico City’s Sacmex Water System said the situation would be resolved in a matter of hours. In the end, it took ten days, and only after local residents had forced the issue, in classic Mexican fashion, by blocking key roads in the neighbourhood.

“They told us they were going to bring us water tankers and that the service would be fully restored the day after,” Paty Pérez, a resident of the area, told the daily newspaper Excelsior. “It is impossible for us to live without water. Azcapotzalco is one of the municipalities that always lacks water; there are elderly people who live on the fourth floor of their buildings who have to carry the water up the stairs.”

It is not just poor neighborhoods that are feeling the effects of Mexico City’s worsening water crisis. Whenever my Mexican wife and I come to her native city (where we are at the moment), we stay in a 13th floor apartment on the edge of the leafy, colorful middle-class barrio of Coyoacan, which is home not only to the Museo de Frida Kahlo but also the former home of Leon Trotsky, both well worth a visit. The apartment belongs to a generous, gregarious septuagenarian Argentinean emigree whom my wife regards as an adopted aunt.

She and her neighbours are also having problems with water. At any moment, particularly in Spring, the supply can suddenly run dry and may not return for a number of hours or even until the next day. This has been happening for many years but it began occurring a lot more frequently when work began, in 2012, on a giant skyscraper complex a few blocks away called Complejo Mitikah. The complex features two office towers, one owned by We Work, both of which are overshadowed by Mitikah tower, a 67-floor apartment building that, once finished, will be Mexico City’s largest residential skyscraper. 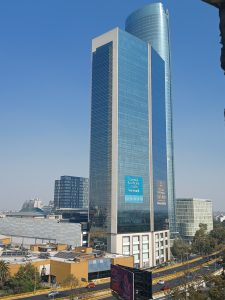 The complex is billed as a fully self-contained “vertical city” that will include a giant shopping mall, a supermarket, a private hospital, gyms, swimming pools, boutique restaurants and bars. If the skyscraper’s residents, many of whom will no doubt work from home, would rather not venture out into the city, they won’t have to; just about everything they could possibly want or need is on site.

Naturally, the complex has massively increased the demand for water in the local neighborhood, but it is other local residents that are paying the price. More and more often, the underground water tanks that serve nearby residential buildings are running dry. This is particularly true in Springtime, just before Mexico’s rainy season begins. It can take hours or in extreme cases even days before water tankers arrive to refill the tanks. On public holidays or over long weekends the government can sometimes cut off water to residents in order to carry out much-needed maintenance work.

Mexico has suffered two consecutive years of low rainfall. The situation was already severe in April 2021. As an article in El País noted in May, “surviving the dry season depends in large part on how much water has been accumulated during the wet months”:

“In 2020, the rains were not sufficient to fill all of the country’s network of dams and now, as a consequence, of the 210 biggest in Mexico, more than half are at less than 50% of their capacity. Furthermore, 61 are at critical levels at less than 25% capacity, mostly in northern and central Mexico.”

Mexico is no stranger to water crises. In 1996 and 2011 the country suffered severe droughts but as the El País article points out, lessons were not learnt. It is also true that Mexico has not exactly taken care of its precious water resources. Mexico City itself lies in the heart of a region called Valley of Mexico that was once home to a vast network of lakes. Located in the Trans-Mexican Volcanic Belt, the valley contains most of the Mexico City Metropolitan Area, as well as parts of four neighbouring states: the State of Mexico, Puebla, Hidalgo and Tlaxcala.

Between the 17th and early 20th centuries the five lakes of Valley of Mexico — Xaltocan, Chalco, Texcoco, Xochimilco and Zumpango  — were almost totally drained, partly to protect the city from constant flooding but also to help it grow. Mexico City could only grow into the vast metropolis it has become through a ruthless process of land reclamation. Xochimilco, in the southern part of Mexico City, still exists but it is much diminished. Zumpango, in the State of Mexico, was reconverted into a reservoir in the late eighties and early nineties.

A Step in the Right Direction

Lake Texcoco may also see a renaissance of sorts in the coming years. Almost a decade ago, the drained lake bed was chosen as the site for a massive new international airport, despite the fact that it continues to attract much of Mexico City’s run-off water. The ground has extremely high water content and low resistance to stress — not exactly ideal conditions for a huge international airport. But as I reported for Wolf Street, for the construction companies involved, it would have been the perfect boondoggle: once the airport was built, the chronic structural problems that ensued would have necessitated huge amounts of maintenance work, just to keep the land fit for purpose.

By 2018, hundreds of billions of pesos had flowed into the project and costs were soaring. But then in December of that year, Andrés Manuel Lopez Obrador won the presidential elections. One of his first acts was to cancel the project, after consulting the public on the matter in a referendum, much to the horror of the investment community. The AMLO government’s current plan for Texcoco is to restore the former lake and build a national park around it. Given that under Texcoco’s marshy land lies one of Mexico City’s most important aquifers, this is a welcome development for a city facing an existential water crisis.

As a recent report by Greenpeace points out, not only is Mexico City suffering from a severe shortage of water, but what water is available is distributed unevenly. In largely middle or upper middle-class municipalities such as Benito Juárez, Coyoacán, Cuauhtémoc and Miguel Hidalgo,  only 0.1% of homes do not have piped water compared to 11% in working class neighborhoods such as Milpa Alta.

The Crisis in Numbers

Mexico’s water crisis has been a long time in the making. In 2016, more than 50 million Mexicans — roughly 40% of the population — were facing perennial or seasonal water shortages in urban areas, according to research published in Nature, which ranked Mexico as one of the countries where water scarcity was likely to deteriorate the most. That was before the latest drought. According to the same study, Mexico City was the third most populous mega city on the planet facing severe water shortages (on a seasonal basis), behind Delhi and Shanghai.

The city already has a population of nearly 22 million, rising to 27 million if you include the surrounding areas, but the local authorities expect it to reach as high as 30 million by 2030, reports the BBC. It has more rainfall than London but with most of its lakes gone, much of that water is wasted.

Mexico, together with Spain, is the world’s fifth largest consumer of water on a per-capita basis, after the United States, Australia, Italy and Japan. Water consumption in Mexico, as in most of the world, is divided into personal, industrial, and agricultural use. Globally, industry accounts for 22% of the world’s annual water consumption, compared to 8% for personal consumption and 70% for agriculture, according to UN data. In Mexico, according to the National Water Commission, agriculture uses between 68 and 70% of the country´s water, industry and hydroelectric plants around 14%, while personal consumption accounts for around 10%.

Much of that water is not safe to drink. As Greenpeace reports, the groundwater in Mexico City has seen an increase in the concentration of metals such as arsenic, boron, iron, manganese and lead, as well as chemical compounds, drugs, antibiotics and other emerging pollutants. Most people who can afford to, drink bottled water, which has provided huge profits for companies such as Coca Cola, Nestle and Pepsi Co, while sharply increasing the country’s consumption of plastics.

In the last few years, Mexico has topped numerous rankings as the world’s largest per-capita consumer of bottled water. And the level of consumption keeps rising. Seventy-six percent of  households currently buy bottled water, according to a household and environment study by the National Institute of Statistics and Geography (Inegi). That number is up from 70% in 2015, according to the same document. The total amount spent on bottled water has increased three fold in the past 15 years, reports the Mexican daily La Jornada.

A recent study by the National Autonomous University of Mexico (UNAM), Latin America’s largest university, warns that time is fast running out for Mexico City. The metropolis could face its own “Day Zero” — when supplies of water run so low that government must begin rationing the precious liquid — as early as 2028.

Cape town, South Africa, was the first major city on the planet to come close to running out of water. “Day Zero” arrived in 2018, when the South African government began to set quotas and manage the amount of water that each citizen could use. The same could happen within the next decade in Mexico City, the UNAM report warns:

Water is the most valuable resource we have, but we could run of it out in a matter of years. Mexico faces an acute water crisis, but its citizens are not aware of it as water continues to flow freely from the taps.

Those actions include increasing the cost of water for industry and farmers, raising public awareness about how to reduce one’s personal consumption of water (such as by turning off the tap when brushing one’s teeth or saving shower water while waiting for it to heat up) and investing more in maintenance of the city’s water infrastructure. Some 35% of Mexico City’s water is lost in leaks as it flows along the city’s pipe network.