I’m a smidge late to a curiously underreported keynote speech by China’s president Xi Jinping at Davos, which was held online. The text is embedded at the end of the post.

Admittedly, any recounting of a presentation will wind up inserting the tale-teller’s noise in the signal, if nothing else through what was highlighted and omitted. But the filtering by Bloomberg and the Financial Times seemed odd, and the fact that the Wall Street Journal didn’t deign to take notice of it, even odder. Instead, the Journal’s front-page China article yesterday was China Seeks to Cushion Blow of Economic Pain as Momentum Slows. Here’s what the Journal serves up when you search for “Xi” and “Davos”, in reverse chronological order: 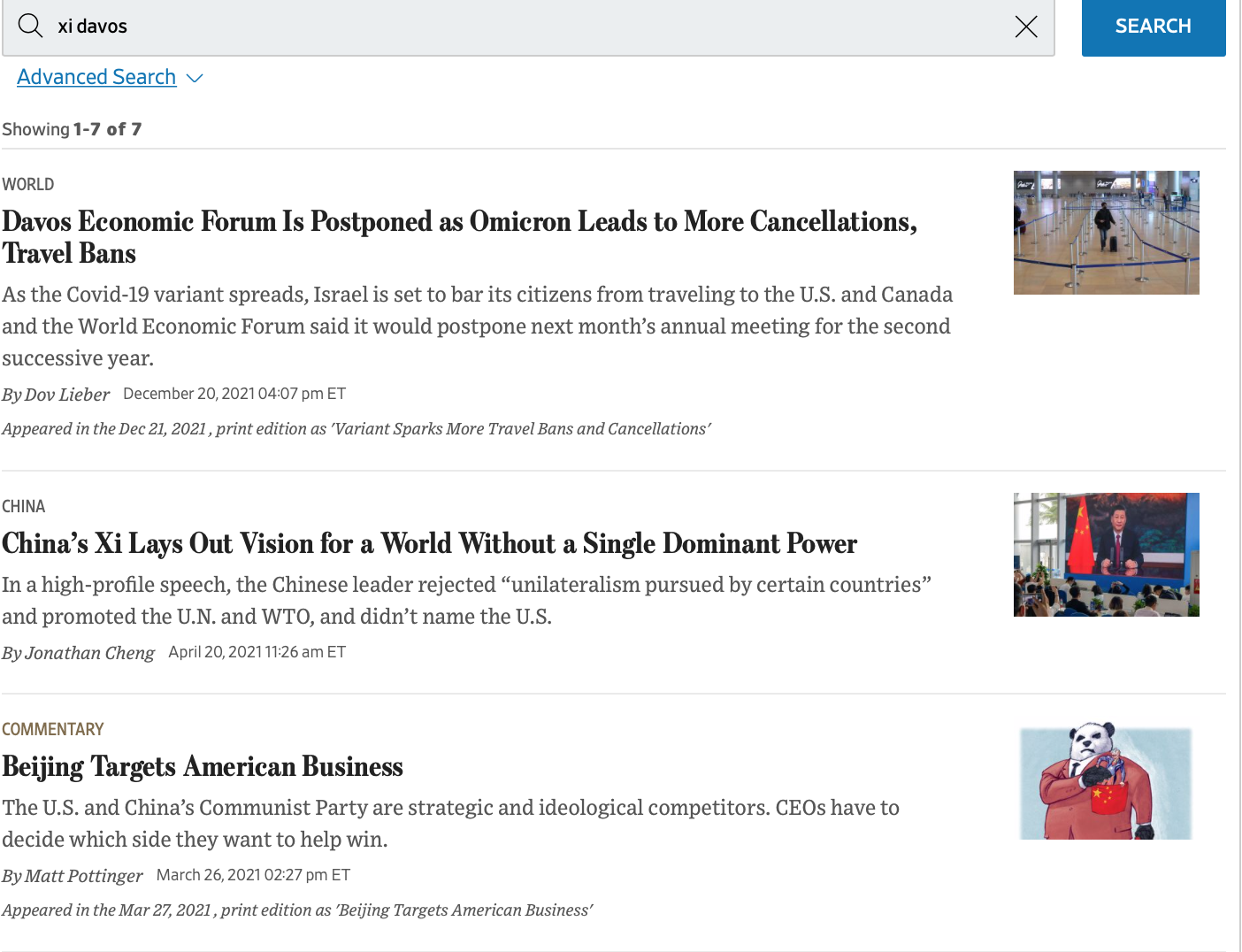 One might wonder why Xi would deign to speak to Davos billionaires. First, the Chinese leader doesn’t have many opportunities to speak to a Western audience that isn’t in the context of some immediate political business. So he would have more degrees of freedom than he would in other settings by not having topics he felt compelled to address before getting to any other messages. Second, the rich at that level often have political influence or aspire to, and have the ego to give themselves high scores of their ability to assess individuals and situations. So at the margin, the speech would be a low cost investment in playing ambassador and promoting China. Third, this was a friendly forum; no pesky journalist Q&A.

And it was a fine speech, albeit not as clearly structured as Xi’s 2021 Davos remarks: introductory formalities and clearly spelled out cultural references, and a series of measured, thought out points, on his vision for China’s growth and prosperity, the dangers of uncoordinated monetary policy at a time of high uncertainty, the treatment of foreign participants (short version, if you behave, you are welcome), a request for the US to stop eyepoking (with one of the supporting arguments that geopolitical spats are bad for commerce), and a big pitch for continued globalization and stronger world governance, provided China has a suitable number of seats at the table.

The two articles touched on these themes to some degree, as we’ll discuss below. But both completely bypassed Xi’s attention to the interests of developing economies and by implication, China’s attentiveness to them. This sure sounded like China arguing for a role as the natural sponsor/leader of developing economies. As the prior year’s Davos, Xi had set forth “four major tasks facing the people of our times;” take note of number three:

The first is to step up macroeconomic policy coordination and jointly promote strong, sustainable, balanced and inclusive growth of the world economy.

The second is to abandon ideological prejudice and jointly follow a path of peaceful coexistence, mutual benefit and win-win cooperation.

The third is to close the divide between developed and developing countries and jointly bring about growth and prosperity for all.

The fourth is to come together against global challenges and jointly create a better future for humanity.

The argument for economic coordination was if anything even stronger this time, given the divergence between the US and China’s interest rate policies. From the Bloomberg story: 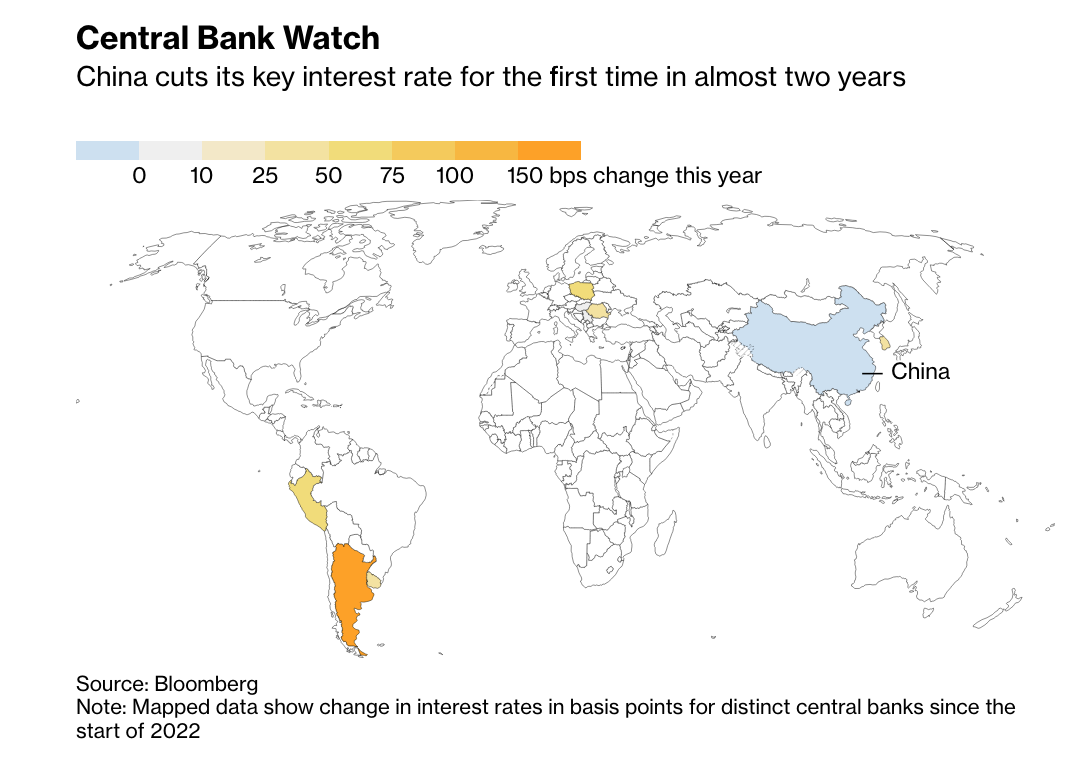 Xi made a case for coordination in the name of developing economies:

The world economy is emerging from the depths, yet it still faces many constraints. The global industrial and supply chains have been disrupted. Commodity prices continue to rise. Energy supply remains tight. These risks compound one another and heighten the uncertainty about economic recovery. The global low inflation environment has notably changed, and the risks of inflation driven by multiple factors are surfacing. If major economies slam on the brakes or take a U-turn in their monetary policies, there would be serious negative spillovers. They would present challenges to global economic and financial stability, and developing countries would bear the brunt of it…

Major economies should see the world as one community, think in a more systematic way, increase policy transparency and information sharing, and coordinate the objectives, intensity and pace of fiscal and monetary policies, so as to prevent the world economy from plummeting again. Major developed countries should adopt responsible economic policies, manage policy spillovers, and avoid severe impacts on developing countries. International economic and financial institutions should play their constructive role to pool global consensus, enhance policy synergy and prevent systemic risks.

This is a more serious concern than Davos squillionaires appreciate, unless they are currency traders. When the Fed lowers and raises interest rates, destabilizing hot money flows in and out of small economies. For instance, former IMF Chief economist, then India’s central bank governor Raghuram Rajan took issue with the Fed’s efforts to shift blame for its policy damage in 2014. From an interview with Bloomberg:

Now when they are withdrawing that money, they are saying, “You complained when it went in. Why should you complain when it went out?” And we complain for the same reason when it goes out as when it goes in: it distorts our economies, and the money coming in made it more difficult for us to do the adjustment we need for the sustainable growth and to prepare for the money going out

International monetary cooperation has broken down.

Back to 2022. This was Bloomberg’s take on Xi’s economic message:

Chinese President Xi Jinping called on nations to secure global supply chains and prevent inflation shocks, as the leader of the world’s No.2 economy seeks a smooth path to clinching a precedent-defying third term in power…

An energy crunch in China’s border nation Kazakhstan led to Russian troops being enlisted to help crush a public uprising earlier this month, bringing supply-chain risks to Beijing’s back door. China is seeking to minimize economic and diplomatic instability as Xi prepares to keep power at the ruling Communist Party’s leadership congress in the second half of this year.

“The fundamentals of the Chinese economy are unchanged — it remains resilient, has sufficient potential and its long-term prospects are positive,” he said.

Angela Mancini, partner at Control Risks Group Pte in Singapore, told Bloomberg TV on Tuesday morning that Xi avoided spelling out for a global audience the risks confronting his government.

Since Kazakhstan’s total exports to China in 2019 were $7.9 billion out of gross Chinese imports of over $2 trillion, or less than 0.4%, it’s hard to see how it creates supply chain issues, particularly since the protests are in the cities, well away from suppliers who export petroleum products to China. Kazakhstan is important, however, as a key partner in a pipeline project under development.

And why should Xi describe domestic risks to an external audience?

The Financial Times, by contrast, gave pride of place to another set of Xi’s economic points, on how egalitarian growth should be. First, let’s look at the germane section of his talk:

Thanks to considerable economic growth, the Chinese people are living much better lives. Nonetheless, we are soberly aware that to meet people’s aspiration for an even better life, we still have much hard work to do in the long run. China has made it clear that we strive for more visible and substantive progress in the well-rounded development of individuals and the common prosperity of the entire population. We are working hard on all fronts to deliver this goal. The common prosperity we desire is not egalitarianism. To use an analogy, we will first make the pie bigger, and then divide it properly through reasonable institutional arrangements. As a rising tide lifts all boats, everyone will get a fair share from development, and development gains will benefit all our people in a more substantial and equitable way.

This was the pink paper’s assessment:

Under the policy, spearheaded by Xi, the Chinese Communist party has been reshaping the country’s business and cultural landscape via a months-long series of crackdowns. This has targeted industries including fintech, education and entertainment as well as perceived societal ills such as celebrity culture, gaming and effeminate fashion trends.

The moves, which have wiped billions of dollars from Chinese and foreign investors, have sparked international debate over the political and economic motives of the policy, and made the future of investing in China uncertain.

Xi attempted to ease some concerns, insisting to the Davos audience that China remained committed to open to foreign business.

“All types of capital are welcome to operate in China, in compliance with laws and regulations and play a positive role for the development of a country.”

This is quite some cherry picking. In this speech, as in 2021, Xi spoke repeatedly about globalization as an irresistible force. This paean came before the discussion of the approach for domestic China:

Economic globalization is the trend of the times. Though countercurrents are sure to exist in a river, none could stop it from flowing to the sea. Driving forces bolster the river’s momentum, and resistance may yet enhance its flow. Despite the countercurrents and dangerous shoals along the way, economic globalization has never and will not veer off course. Countries around the world should uphold true multilateralism. We should remove barriers, not erect walls. We should open up, not close off. We should seek integration, not decoupling. This is the way to build an open world economy. We should guide reforms of the global governance system with the principle of fairness and justice, and uphold the multilateral trading system with the World Trade Organization at its center. We should make generally acceptable and effective rules for artificial intelligence and digital economy on the basis of full consultation, and create an open, just and non-discriminatory environment for scientific and technological innovation. This is the way to make economic globalization more open, inclusive, balanced and beneficial for all, and to fully unleash the vitality of the world economy.

And the crackdown started with rule-defying Chinese billionaire Jack Ma, and as far as I can tell, has gone much harder after other too-big-for-their-britches home players than foreigners. The Financial Times might consider the noteworthy part that Xi finds it necessary to remind outsiders that they have to follow local rules and not act like looters.

Again noteworthy was that Xi’s first big point for the 2022 Davos speech was the need for international cooperation to beat Covid, and that was also downplayed by the press. The one Bloomberg mention was to question China for pursuing a zero-Covid policy that is a negative for growth; the Financial Times noted only Xi calling for more use of vaccination and closing the global immunization gap.

Xi pointed out how China had delivered 2 billion doses of its vaccines, a fact that Lambert and I can’t recall ever having seen in the English language press despite our Covid fixation:

Xi also had a long discussion of the “need to discard Cold War mentality and seek peaceful coexistence and win-win outcomes” and accept other political and economic systems. Again the Western press averted its eyes.

And the press failed to call out Xi for a major lapse, given his positioning China as being on the side of cooperation: skipping over climate change and ever rising competition for resources.

Mind you, this site has not been gaga over China. But Xi has accomplished a great deal, and what he says deserves a fair hearing. The basis for criticizing China is not grand or grandiose ideas, but the degree to which China walks its talk. For instance, despite the palaver about sharing technology, foreign companies who have set up in China warn that Chinese partners are world-class in knocking off products and ripping off intellectual property.

But US leaders are no longer capable of making stirring talks about the future. Obama was given credit for being a visionary when I found most of his speeches to be uninspired. Deep down, our elites know too many people are on to how deeply corrupt our society is. They may not do anything about it, but they sure won’t swallow the lies.