The spat between the FAA and FCC over the about to begin 5G launch in the US just became front page business press news, although the battle heated up big time earlier in December.

This struggle is not only important in and of itself, but it illustrates a pathology that has become pervasive in America: money talks and the public be damned.

The very short version is that Verizon and AT&T spent oodles buying 5G spectrum rights in early 2020, where despite (or as you will see, arguably because) rulemaking, the FCC imposed no meaningful restrictions on the carriers’ use of the rights they purchased. A group representing 10 airlines is having a hissy, having lost at the rulemaking phase, they are still trying to stop the 5G rollout until the safety of the 5G operation with respect to airline altimeters is concerned. As we will again see, theoretically there is no interference, but as a saying attributed to Yogi Berra goes, “In theory, there is no difference between theory and practice. In practice, there is.”

One reason the two sides are at odds is the airlines have vastly more stringent notions of safety than communications providers, and for good reasons. The reason the great unwashed public is willing to do something so seemingly crazy as get into what amounts to aluminum orange juice cans and fly at crazy heights is that the airlines have a phenomenal safety record. Their existence depends on the perception of lack of danger despite otherwise high apparent risks (look at the safety record of gliding, when most glider pilots are professionals gliding for sport, as a contrast). So their cautiousness is deeply ingrained as necessary for industry survival.

The wireless companies in a joint letter on Sunday said they would not deploy 5G around airports for six months but rejected any broader limitation on using C-Band spectrum.

The Verge has posted a copy of the Verizon missive.

Reuters reports that Airlines for America, which represents American Airlines, Delta, FedEx, JetBlue and UPS, among others, is pretty het up and plan to file for an emergency injunction Monday if the wireless carriers didn’t climb down.

The wireless carriers attempt to claim the moral high ground by saying they’ve made the same concessions in France that they’ve offered to make here, and that should settle the matter. But even Reuters makes clear that the French network is not the same as the US one:

FAA officials said France uses spectrum for 5G that sits further away from spectrum used for radio altimeters and uses lower power levels for 5G than those authorized in the United States.

Verizon said it will initially only use spectrum in the same range as used in France, adding it will be a couple of years before it uses additional spectrum. The larger U.S. exclusion zone around U.S. airports is “to make up for the slight difference in power levels between the two nations,” Verizon added.

Sara Nelson, president of the Association of Flight Attendants-CWA (AFA), representing 50,000 workers at 17 airlines, on Sunday wrote on Twitter that pilots, airlines, manufacturers and others “have NO incentive to delay 5G, other than SAFETY. What do they think … we’re raising these issues over the holidays for, kicks?”

This gives an idea of what the airlines see at the extent of the problem:

(Thread) Kind of missed this over the Holidays, but the FAA is throwing a massive shit fit over 5g, one that may have huge impacts on air travel. The FAA is extremely concerned that 5g radios may impact various radio altimeters…https://t.co/JZsZeYkdwU

Verizon in its letter also cheekily says the airlines had all this time to upgrade their altimeters. Please. How many airlines are involved, and more important, traffic control towers and other airport equipment that is not under the control of the airlines?

The wireless carriers’ position might seem reasonable until you realize they actually can’t make assurances. Even if their equipment really truly swear to God won’t impinge upon the spectrum the carriers’ use, there’s no guarantee they won’t. From a comment on AVWeb:

Unfortunately, as people who have been graced by the magic that is RF on a personal level, from the HAM down the street to the engineer in the lab testing the gear, have learned: just because you want to be transmitting on one set of frequencies doesn’t mean you aren’t also transmitting on a whole host of others. Furthermore, old equipment is not designed with constraints nobody had ever thought of at the time in mind.

Mass-produced, cheap RF devices are among the worst offenders, and with 5G base stations deployment being estimated in the millions by the time the rollout is “complete” to get good coverage, the only way for this huge infrastructure deployment to remain profitable for the carriers is for the equipment to be cheap and installed quickly. Cheap means likely QC issues, which mean a lot of unwanted emissions (including pop-fly spurious emissions) are likely. Installed quickly means people aren’t going to be going around doing field strength surveys to make sure the antennas aren’t aimed such that they’re bouncing or even emitting something straight up on the final approach to your local airport. While it isn’t likely to be a constant issue that renders your radar altimeter visibly wonky any time you fly over a 5G coverage area, it has been demonstrated by lab testing that there is a good probability that there will interference given the sheer number of interactions and, take this one seriously; the environment the avionics were designed to operate under – was definitely not a world covered in millions of kiloWatt range ERP transmitters broadcasting with massive bandwidth 24/7, 365.

And mind you, the discussion above covers only the base stations. Passengers have this bad way of not always respecting the directive to turn off their phones or put them in airplane mode. Consumer equipment could also send signals wider than the authorized 5G frequencies.

This is shaping up to be a Godzilla v. Mothra fight. And while the air carriers lost the first round, apparently by virtue of the FCC being captured by its industry plus massive lobbying spend, one thing the Covid crisis has established is that the powers that be regard air travel and deliveries as essential infrastructure. 5G is not. United is already having to pay pilots three times their normal rate to get them to cover for Covid stay-at-homes. What happens if some of the available pool won’t come in because they want to see at least a week of flying under 5G before they show up? Particularly in light of warnings like this Air Line Pilots’ Safety Alert from early December:

Earlier this year, the United States Federal Communications Commission (FCC) awarded the mobile wireless industry radio spectrum to operate 5G transmissions in the “C-Band”, or 3.7-3.98 GHz, adjacent to the spectrum used by radar altimeters. This approval was made despite the aviation industry informing the FCC since 2018 of the need to ensure that radar altimeters are protected from 5G interference. Canada has also approved 5G in the C-Band, but with restrictions against using C- Band in the vicinity of 26 airports and other measures to ensure aviation safety.

Altitude information derived from radar altimeters has been deeply integrated into aircraft systems and automation, with the latest aircraft using it to change aircraft handling qualities and prepare systems such as ground spoilers and thrust reversers for deployment prior to touchdown. This is in addition to radio altimeter use for autoland and in Category (CAT) II/III and Required Navigation Performance (RNP) AR approaches.
On November 2, 2021, the Federal Aviation Administration (FAA) issued a Special Airworthiness Information Bulletin (SAIB), alerting operators to the potential for severe restrictions in flight operations to ensure safety at the following weblink: https://rgl.faa.gov/Regulatory_and_Guidance_Library/rgSAIB.nsf/dc7bd4f27e5f107486257221005f0 69d/27ffcbb45e6157e9862587810044ad19/$FILE/AIR-21-18.pdf 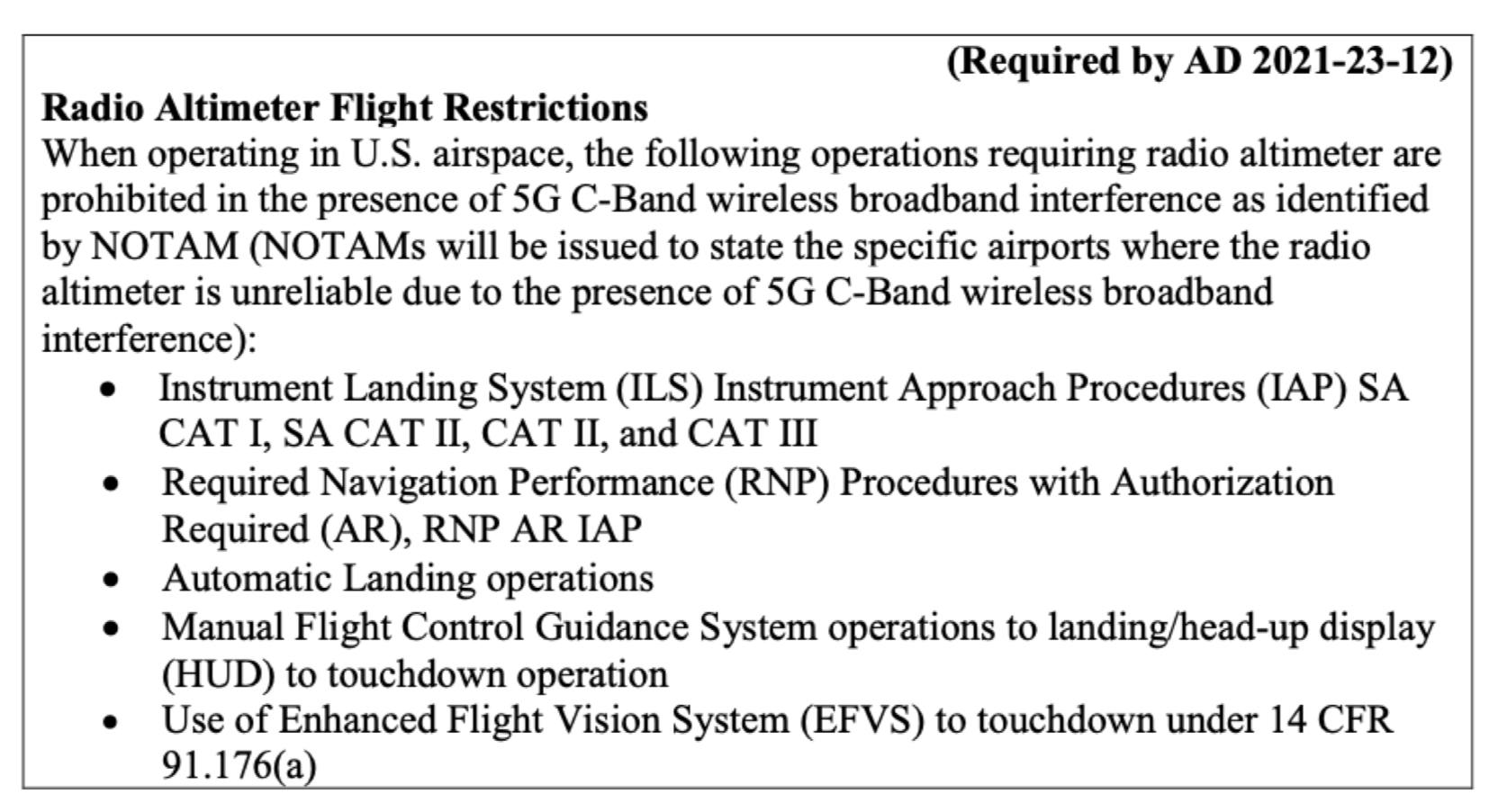