Apart from one catastrophic cold wave, it was warm-season-type threats, from tornadoes to wildfires – regardless of the calendar – that caused most of the weather havoc across the contiguous United States in 2021. The year produced 20 billion-dollar disasters, according to NOAA, the second highest number in inflation-adjusted data going back to 1980. The total cost of 2021’s billion-dollar disasters, $145 billion, was the third highest on record since 1980.

In its preliminary annual round-up of U.S. climate, released on January 10, NOAA found that 2021 was the fourth warmest year on record for the 48 contiguous states. Much of the warmth was concentrated in the second half of the year, the nation’s warmest July-to-December period on record.

The contiguous U.S. has now warmed by around 2.0°F (1.1°C) since 1895, which is close to the global average. That’s a noteworthy trend given that the U.S. was lagging much of the globe in long-term warming during the late 20th century.

Based on preliminary data from NOAA compiled by independent meteorologist Guy Walton, the U.S. in 2021 had almost three times as many daily record maximums (34,569) as daily record minimums (12,644). That makes 2021 the second year in a row with record-high-to-record-low ratios exceeding 2-to-1. A 2009 paper by Walton and colleagues predicted that the typical ratio could reach 20-to-1 by mid-century and 50-to-1 by late in the century. 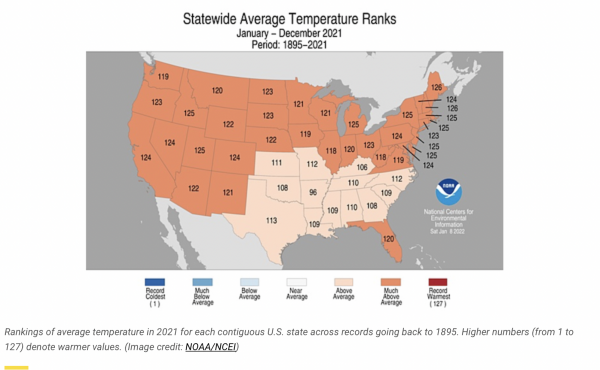 Every one of the 48 contiguous states was warmer than average in 2021, and 35 of those states had a top-10 warmest year. The annual warmth was only slightly muted across the Southern Plains and Southeast, in large part the result of a brutal cold wave that gripped much of the central United States in mid-February.

A total of 106 stations set or tied all-time record lows in February. The combined intensity and duration of the intense cold were the worst in decades over many locations – especially across Texas, where natural gas outages left millions without heat for days. At least 226 deaths and at least $26 billion damage can be attributed directly to the cold wave, according to NOAA. The impacts may be far greater when considering knock-on effects to the regional economy.

As if to make up for lost time, the nation bolted into warmer territory from March onward. Starting at that point, every interval extending to December (March-December, April-December, May-December, etc.) ended up as the nation’s warmest on record for that interval.

Intense heat and drought led to another summer of destructive forest fires across the West, with smoke and haze spreading far across the eastern half of the nation in July. According to the National Interagency Fire Center, the annual U.S. total acreage burnedin 2021 – 7.13 million acres – was considerably less than the 10-million-plus acres consumed in 2020, 2017, and 2015 and the 8.7 million in 2018, albeit well above the 4.6 million in 2019. The year’s largest fire, and the second largest in modern California history was the Dixie Fire, which raged across 963,000 acres in July. The Dixie and Caldor fires each destroyed more than 1,000 structures in California.

The most tragic heat wave of the year, and arguably the most anomalous heat wave in modern global history, struck the U.S. Pacific Northwest and far southwest Canada in late June and early July. Among the mind-bending temperatures recorded were all-time highs of 108°F in Seattle and 116°F in Portland, both on June 28. A total of 310 U.S. locations set or tied all-time record highs in June.

Early estimates showed more than 600 “excess deaths” from the heat wave in Washington and Oregon and more than 400 in British Columbia. Once researchers have combed through death certificates and other evidence, they may find that the ultimate toll was even higher. A team from the World Weather Attribution project estimated that the heat wave was roughly a once-in-a-millennium event and that it would have been “virtually impossible” without the presence of human-caused climate change.

After a strikingly mild autumn, December 2021 was astonishingly warm over large areas, especially the Southern Plains and lower Mississippi Valley, where many locations had multiple days soar well above 70°F and even 80°F. As noted by independent weather researcher Maximiliano Herrera, Houston’s average temperature for December (including highs and lows) of 67.8°F was not only higher than that of any other December on record, it was higher than for any November!

Similarly, Wichita Falls, Texas, hit 91°F on Christmas Eve (December 24), which melted its all-time high for December and beat any day from any November as well.

Preliminary data for December from NOAA showed a total of 6,321 daily record highs and 910 monthly record highs either broken or tied across the nation. 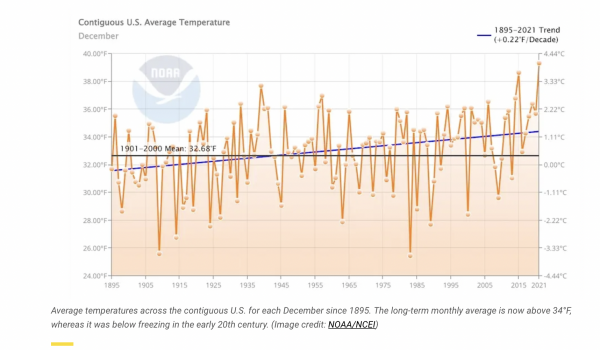 Although there were obvious upsides to the widespread warmth in December – from reduced heating bills to the facilitation of outdoor activity during a pandemic – the persistent record-warm air mass, together with ample low-level moisture from the tropics, laid the atmospheric groundwork for two devastating tornado outbreaks.

The first, on December 10-11, was the nation’s deadliest and likely most damaging on record for any December, with at least 90 fatalities, chiefly across western and central Kentucky, and a record 69 confirmed tornadoes. NOAA estimated the damage at $3.9 billion.

Then, on December 15, a massive cyclone whipped across the central U.S., spawning EF2 tornadoes as far north as Minnesota and Wisconsin – an outbreak unprecedented for December in its northward extent and in the total number of tornadoes confirmed. That total of 100 tornadoes made it one of the largest one-day outbreaks on record for any time of year, and it broke the December record set just five days earlier.

The tornadoes and widespread high winds of December 15 led to an estimated $1.8 billion in damage, according to NOAA.

With unusually cold air pooled across western Canada, a strong polar jet stream cascaded over the Rocky Mountains, leading to a fierce mountain-wave windstorm on December 30 in and near Boulder, Colorado, with gusts hitting 115 mph at Rocky Flats. The winds ripped across terrain parched by record-dry and near-record-warm conditions since September. A wildfire raced across the towns of Louisville and Superior just east of Boulder, shocking residents and sending them fleeing. The fire was Colorado’s most destructive on record and the nation’s most damaging winter wildfire on record, with 1,084 homes destroyed and at least one person killed (see our post from January 4).

Moisture and the Lack of It

As is often the case, precipitation was a mixed bag for the United States when averaged by state and across the full year. Montana recorded its ninth driest year on record, while Massachusetts had its ninth wettest.

Clearly, the nation has veered far from the widespread sogginess that was in place several years ago, when the nation’s wettest 12 months on record were recorded (37.93” from July 2018 to June 2019). 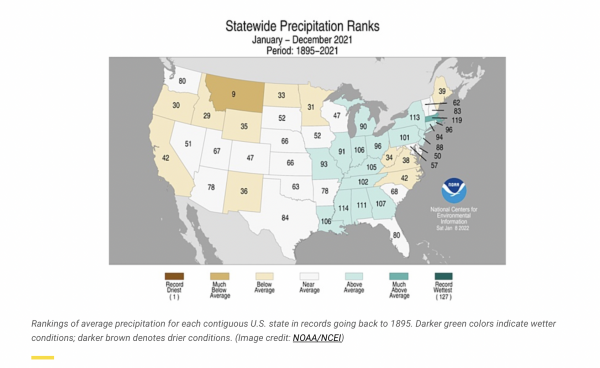 Despite the reach and intensity of U.S. drought in 2021, several devastating flood events were recorded, including a flash flood that took 20 lives in and near Waverly, Tennessee, on the morning of August 21 after a “training” thunderstorm complex dumped hours of torrential rain.

1/7
The State Climate Extremes Committee has verified a new Tennessee 24-hour precipitation record of 20.73”, measured in McEwen, TN on August 21, 2021. Follow this thread for more on the new record. https://t.co/rH3oQ3feSS @NWSNashville @NWSSouthern pic.twitter.com/uaBefi7Xy7

Category 4 Hurricane Ida was the most destructive of the year’s 2021 U.S. landfalls. Ida struck on Louisiana on August 29, making landfall at the key oil industry hub of Port Fourchon with 150 mph winds. Almost half of the homes in Grand Isle were nearly or completely destroyed. Ida caused even more trouble after it had decayed to a post-tropical cyclone and moved into the Mid-Atlantic and Northeast, where it brought torrential rains. The New York City area was especially hard hit, with Ida arriving only a few days after flood-producing rains from Tropical Storm Henri.

The remnants of Hurricane Ida caused flash flooding in and around New York and left at least 29 people dead. Here’s what it looked like around the region. https://t.co/GuQoe40p93 pic.twitter.com/vdUTGKQR7k

All told, Ida led to at least 96 fatalities and an estimated $75 billion in damage, the fifth highest damage toll from any tropical cyclone in the NOAA billion-dollar database.