Yves here. It can’t be said often that the explosion of growth of the billionaire and other super well off cohorts is strongly correlated with the drop in top tax rates.

So, in this land of plenty, what could possibly be bad about someone chasing the dream and accumulating a larger than normal portion of the pie? Isn’t this what capitalism is supposed to be all about? “Land of the free, home of the brave” and all that…aren’t we all supposed to revel in our freedom to accumulate, particularly if it results from uncommon bravery in risk-taking? Isn’t this just what Bill Gates, George Soros, and Jeff Bezos (not to mention Elon Musk) are so admired for doing?

The problem is that free and unfettered capitalism of the ilk promoted by the GOP and corporate lobbyists in DC is terribly hindered by “government regulation,” too much taxation, and purported “liberal bias for socialism” or, as Tucker might be wont to say, nattering nabobs of negativism.* Actually, that of course is a quote from Spiro T. Agnew, the only (at least I think the only) corrupt Vice President proved to have actually received piles of cash while in the White House. (Rachel Maddow’s superb Bag Man lays out this fascinating story for those who don’t recall the Nixon Years or thankfully are too young to have lived through them.)

Socialism has returned to our political conversation as a kind of epithet thrown at anyone who believes in a social safety net, progressive taxation where higher earners pay more, or constraints on corporate over-reach, like ever-larger quasi-monopolies or price gouging opportunists. In its purest form, “socialism” was used by Marx to describe a transition state between capitalism and communism in the 1800s. But in practice over the nearly 2 centuries since his Manifesto, the concept has evolved into the European notion of “social democracy” which Merriam-Webster defines as “a democratic welfare state that incorporates both capitalist and socialist practices” that describes most European systems that attempt to balance out public and private goods.

But here in the good ol’ US of A, the idea that anyone seriously espouses European social democratic ideas is a joke. The closest we got was FDR in the depression with Social Security and LBJ in the ‘60s with Medicare. Obamacare, in contrast, was a weak echo of those high-minded times, acquiescing as it did to Big Pharma in a sort of Hobson’s Choice (no real option) if a dark-money contaminated DC was even to consider it. And now, of course, the heroic Obamacare vote of John McCain has been replaced by “centrist” Sinema who has taken in Pharma dollars by the boatload. Wonder how she would have voted then, don’t you?

Our political system has become so bloated and corrupt with untraceable money, it barely rates a headline when a billionaire like Peter Theil – an out gay man – announces his departure from the Meta (Facebook) Board so he can work full time on electing Trumpists to Congress so they can join the gay-bashing, Fox-touted, anti-tax, anti-vax, and pro “freedom” crowd. I think it fair to say that Thiel has ignored GOP/Trumpian social policy just so long as another humongous tax cut for the super-wealthy might be engineered. Good ROI for his estimated “$20 million, so far” committed to this good cause. Not that intellectual consistency has ever been the strong suit of the billionaire class.

So let’s for a moment consider just how much $1 Billion really is. Just a one with a lot of zeros you say? In January 2019, historian Rutger Bregman tried to explain to a bunch of billionaires at the World Economic Forum (held in Davos) why philanthropy is not the way to address inequality. Rather, it’s taxes. On his own website, he helps us understand just how much a billion dollars is in 2019 numbers:

If you made $50k a year, and you didn’t ever spend one penny of it — you just put that money into safekeeping and saved it up — do you know how long you would have to work to save up a BILLION dollars? TWENTY THOUSAND YEARS. That’s right… Roughly 4X the length of recorded human history.

In his recent book, Davos Man, Peter S. Goodman has chosen a great subtitle: “How the Billionaires Devoured the World.” Perfect description for all of them from Thiel to Putin. (And, yes, he’s one of them, this vaunted war-monger of a Communist leader who is in the midst of invading Ukraine). By the time this is published, he may well have come to terms with what is now widely perceived as over-reaching actions that could reshape the world order, and not for the better. Whether he will be able to enjoy his super-yacht that barely reached Russian waters just days before his war was launched is anybody’s guess. It doesn’t look, though, that it will be welcomed in foreign ports anytime soon. And, for a billionaire, hanging out on a superyacht is part of what makes life worth living (ask Bezos, owner of the longest superyacht yet built at 400 plus feet). In the current era, the B-people have clear sailing to keep adding to their piles.

So, back to taxes. For the moment, let’s just consider incometaxes for the highest tax brackets. Again from Bregman’s website come these compelling numbers:

Here are the marginal tax rates by president (since WWII) for the top income brackets: 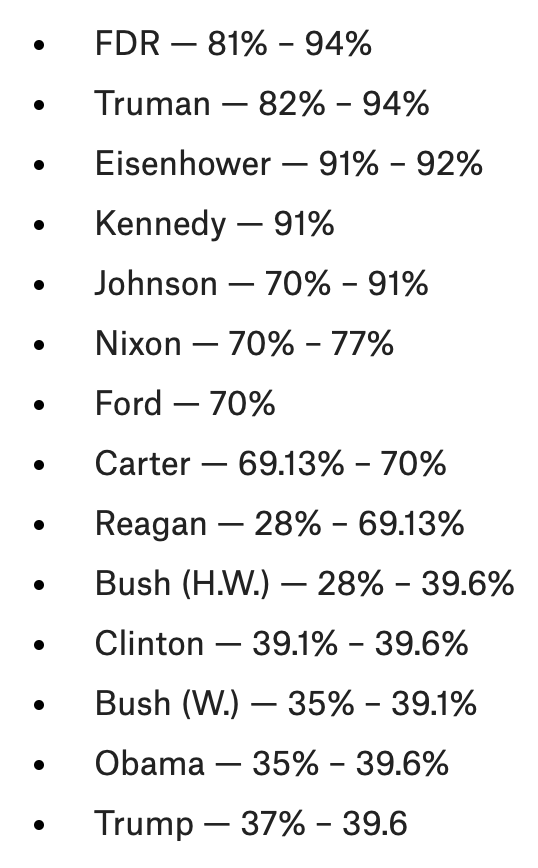 And we can see that as the top marginal tax rate decreases, so does the strength of the middle class… The rich get richer, and the poor get poorer. And they give any attempt to correct this trend the evil & scary-sounding moniker of “Socialism.”

As is clearly demonstrable in the chart, the middle class was in most ways built DURING the period of highest marginal taxation – the 50s and 60s – completely belying the standard GOP “trickle-down” argument that lowering rates creates jobs. But when you overlay this irrefutable data with the Clintonian era’s overt embrace of “Davos Man” calls for globalization abetted by the World Economic Forum (which attracts a fleet of some 1600 private jets every year) you can begin to gather just why working-class wages have been in a tailspin since Reagan’s famous line, “government is the problem, not the solution.” That the right has been so successful in turning the resulting alienation into political rage against immigrants and intellectuals is beyond telling. It is no surprise that Thiel and others continue to invest heavily in anti-government politics and the accompanying phenomenal ROI they achieve by drowning the beast in the bathtub.

Just where this dismal state of affairs ends and the pendulum swings back toward some semblance of balance is not clear. But one thing for sure is true. Dems have to decide if they want to keep dark money flowing and their diminishing number of increasingly safe seats, or if instead they want to step up to embrace powerful economic policies that really would change peoples’ lives. Like a wealth tax. Or the kind of Estate tax in the Eisenhower years (70%). Or serious penalties for hiding wealth off-shore. Or putting the light of day on “shell companies” used primarily to hide assets from tax authorities. Any of those things might begin to erode the emerging economic royalty that is able to permanently endow nearly endless generations of heirs that, thanks to the Supreme Court, will be able to spend untraceable and countless dollars defending their privilege.