Yves here. Wolf does not set a timeline on when more shale gas output and LNG transport and harbor facilities can be built to fill Europe’s energy gap. However, some readers suggested another potential choke point, and I’d be interested in a sanity check: those LNG-carrying ships. Apparently the big spherical storage chamber is particularly fussy to build. Note Wolf does not display that type of tanker, so I wonder if the lower-slung designs will prevail.

The Status of US Natural Gas. 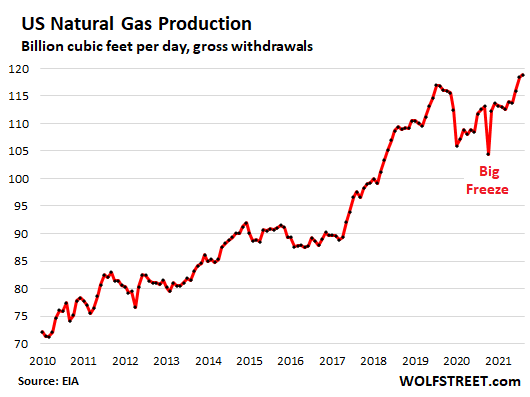 As the price of natural gas in the US collapsed in 2008 amid surging production from fracking, the industry tried to find an outlet. Companies invested in building more pipelines to Mexico, and exports of pipeline natural gas to Mexico rose. And companies invested in large-scale LNG export terminals along the Gulf Coast, and LNG exports from the first of those terminals took off in 2016.

Total exports of natural gas via pipeline and LNG (red line) spiked by 26% in 2021 to a new record of 6.65 trillion cubic feet for the year. Total imports of natural gas, denoted by a negative number (purple line) has remained in the same range since 2013. 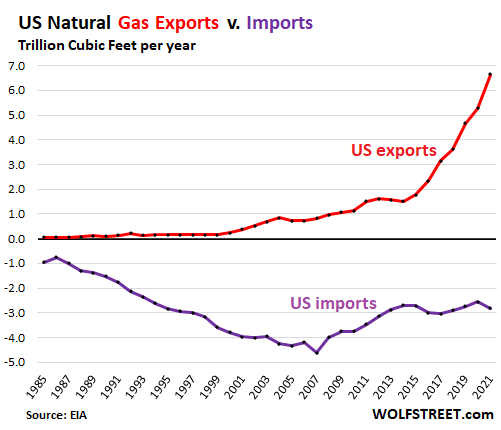 In 2017, the US became a “net exporter” of natural gas, exporting more natural gas to the rest of the world than it imported: 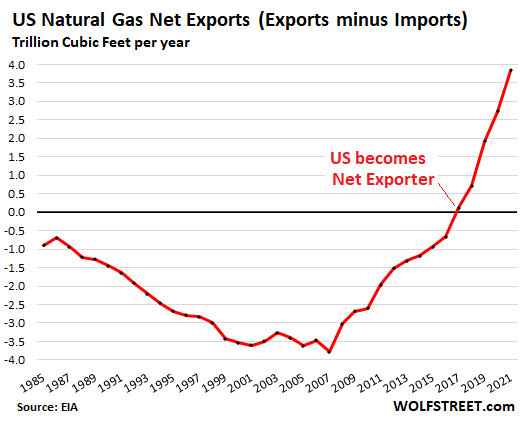 LNG imports essentially ceased, except during the coldest months in the winter in some New England regions that are not well connected via pipeline to producing regions in the US.

The Canada trade: The US exports natural gas to Canada and imports from Canada due to the regional pipeline infrastructure in place. About 30% of US pipeline exports go to Canada. On net, the US imports more from Canada than it exports to Canada.

The Mexico trade: The US does not import natural gas from Mexico; this is a one-way trade, with the US supplying Mexico with ever larger amounts of pipeline natural gas. About 70% of US natural gas pipeline exports go to Mexico. 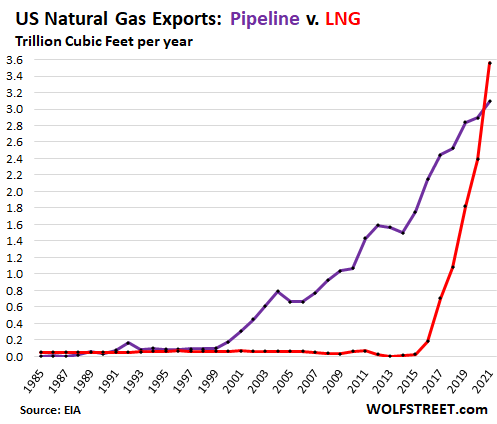 Here is our look at The Huge Ships for the Booming LNG Trade: Designs, Technologies, and Challenges for liquefied natural gas carriers. 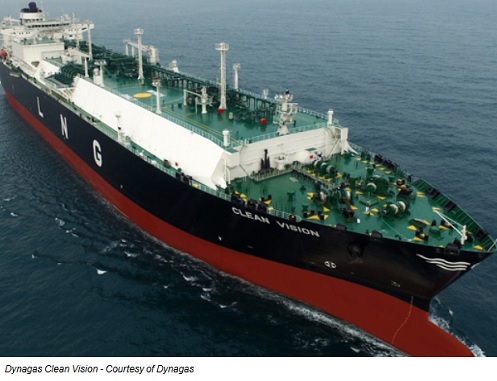 US LNG exports by country.

The list below shows the largest 25 recipient countries in 2021, in billion cubic feet per year, according to EIA data. South Korea has been the largest buyer of US natural gas. China has now surpassed Japan as the second largest buyer. China was a large buyer but in 2019 essentially stopped as part of the trade war, but recommenced in 2020. Brazil has emerged as the fourth largest buyer in 2021.

By comparison, in 2021, the US exported 2.16 trillion cubic feet of natural gas to Mexico via pipelines. This is about as much as the US exported in LNG to the top eight countries on this list combined.

Also note the European countries that bought US LNG in 2021.

In terms of the US as a bigger supplier of LNG to Europe, well, at the moment, there is not a lot of excess capacity left in the US to export more LNG to anywhere. Major additional LNG shipments from the US to Europe would largely be a shift away from other customers. LNG export capacity continues to be ramped up in the US, and even though it’s already in progress, it still takes time. And ramping up export capacity further than is already being planned will take even more time.