Yves here. More collateral damage from the Ukraine conflict, this time China’s lending to emerging economies. The US has been threatening secondary sanctions. Worse, one has to wonder if the postponed Pelosi trip to Taiwan is saber-rattling that the US might recognize Taiwan. China would almost certainly retaliate, the question is how.

China and Russia have built close financial ties over the past ten years, with Russia becoming the largest recipient of Belt and Road lending. Given the sums at stake, the war in Ukraine is putting China’s overseas lending portfolio at higher risk than ever before. This column argues that this is likely to make Chinese state-owned banks more cautious in extending fresh international loans and in rolling over old ones. Because China is a common lender to many developing countries, they now face the added risk of a ‘sudden stop’ in foreign lending.

Editors’ note: This column is part of the Vox debate on the economic consequences of war.

Russia’s attack of Ukraine is causing staggering human suffering and destruction. The impacts on global commodity markets are being acutely felt, as oil and wheat prices have soared, and volatility has increased markedly (e.g. Balma et al. 2022). The broader economic implications are only beginning to be understood (e.g. Danielsson et al. 2022, Bachmann et al. 2022, Korn and Stemmler 2022).

Looking ahead, a central question is the role of China and the Chinese–Russian relationship. So far, the public debate has mainly focused on China’s potential support for Russia as well as the long-term effects for trade between the two countries (e.g. Palmer 2022). What is less understood is just how financially interconnected the two countries already are.2 Russia is the largest foreign debtor to Chinese state-owned banks, accounting for more than 15% of Belt and Road lending between 2013 and 2017 (Custer et al. 2021). This column summarises the debtor-creditor relationship between Russia and China and discusses potential spillover effects to the rest of the world, particularly emerging markets and developing countries (EMDEs).

China’s Overseas Lending Portfolio and the Role of Russia

China’s state-owned banks and enterprises have invested in and lent heavily to Russia, the Ukraine, and Belarus. Cumulative Chinese lending to Russia since 2000 exceeds $125 billion and has mostly financed Russian state-owned enterprises in the energy sector. Total Chinese lending commitments to Ukraine are estimated at $7 billion and have largely supported projects in agriculture and infrastructure. In addition, Chinese banks also have considerable exposure towards Belarus, with around $8 billion in cumulative lending since 2000. Taken together, the three countries account for close to 20% of China’s overseas lending during the past two decades.

For China, the war implies yet another increase in the exposure of its overseas loan portfolio towards debtor countries at risk of default. China’s exposure towards distressed debtors had started its upward march as early as the mid-2010s, when Venezuela defaulted on its debts. Default risks intensified and spread geographically with the pandemic, when more and more developing economies entered distress; almost 60% of low-income countries are now in debt distress or at high risk.2 As a result, China’s state banks now hold a large amount of potentially ‘distressed’ debt. Figure 1 shows the share of China’s total credit portfolio to borrowing countries in distress, which has increased from about 5% in 2010 to 60% at present. The figure traces the share of cumulative overseas lending that has been extended to countries currently in debt distress or involved in a war.

Figure 1 Share of Chinese loan claims to borrowers in distress 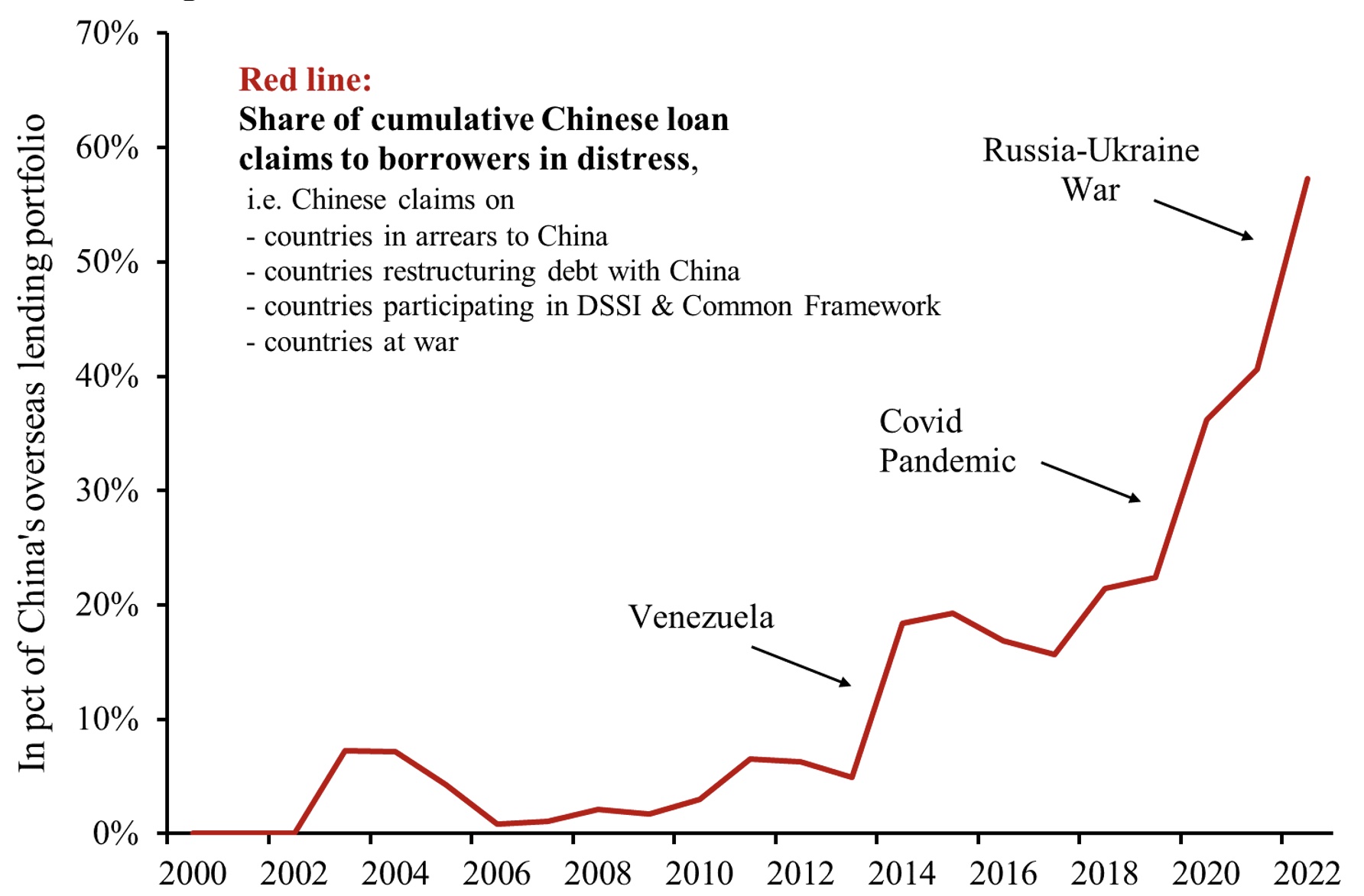 Note: This figure shows the share of cumulative Chinese lending to developing countries that are in distress. The line counts all recipient countries that are in arrears to China, that have restructured debt with China (bilateral or under the DSSI) or that are at war. Data is from Horn et al. (2021, 2022), Custer et al. (202) and the World Bank International Debt Statistics.

Figure 2, which takes a different angle focusing on sovereign risk ratings, arrives at a similar conclusion. The average credit quality of China’s lending portfolio has deteriorated considerably in the past ten years. On average, recipients of Chinese loans were downgraded by five rating brackets, compared to an average downgrade of two brackets in a GDP-weighted benchmark portfolio of EMDE debt. 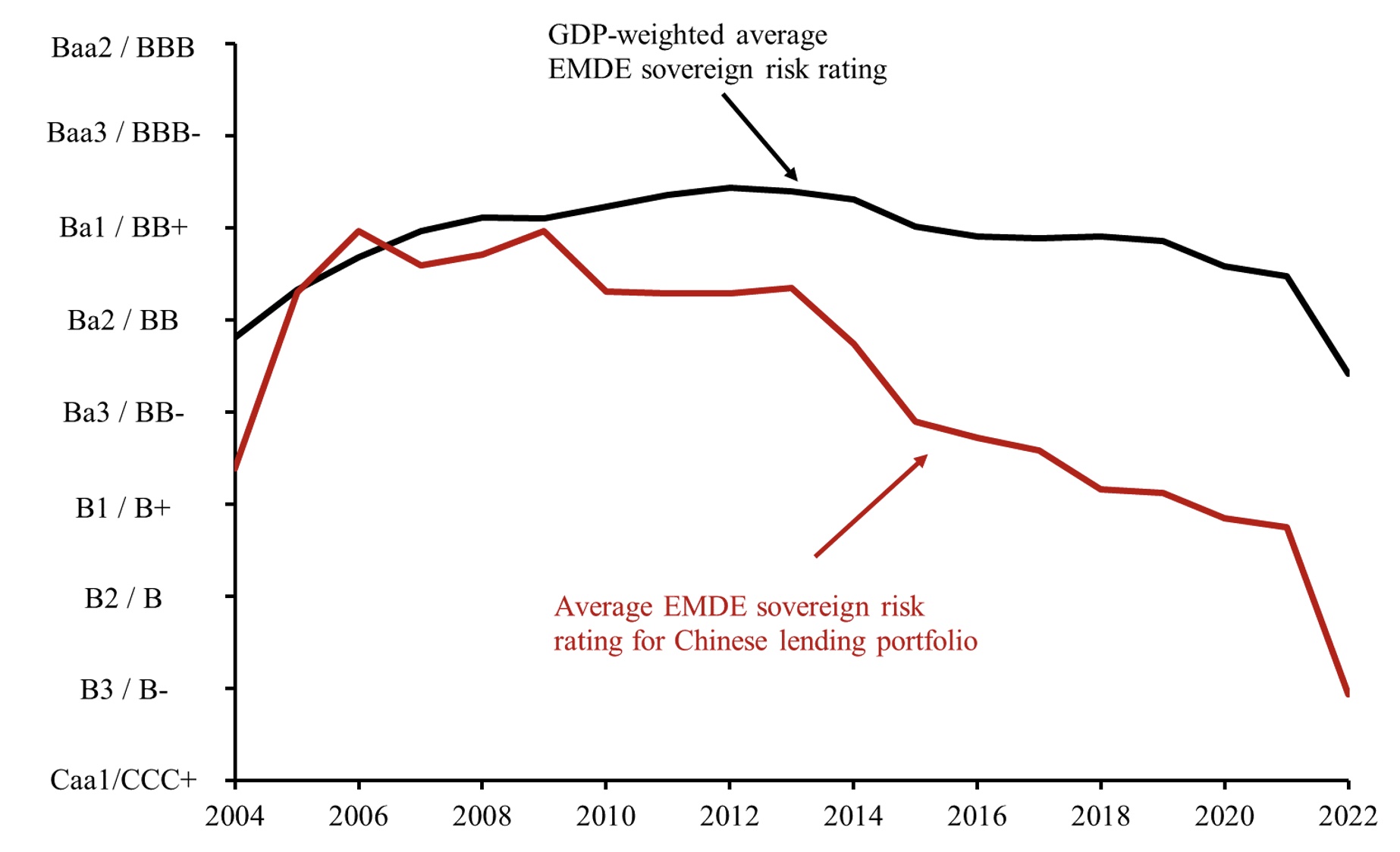 Note: This figure shows the average sovereign credit risk ratings for 108 developing and emerging market countries, for which data is available. The credit risk rating is an average across ratings by Moody’s, Fitch and S&P. The black line shows a GDP-weighted average (with GDP measured on a PPP basis), while the red line shows the average rating of China’s overseas lending portfolio, which was obtained by weighing ratings with cumulative lending commitments. Data is from Horn et al. (2021), Custer et al. (2021), Reinhart et al. (2017) and the World Bank World Development Indicators.

China’s overseas lending and credit relationships remain exceptionally opaque. Chinese lenders require strict confidentiality from their debtors and do not release a granular breakdown of their lending (Horn et al. 2021, World Bank 2021). Moreover, Chinese official loans and related credit events are not on the radar screen of major international credit rating agencies and no systematic data on related defaults are collected by international organisations such as the OECD, the IMF, or the Paris Club. Most Chinese debt-restructuring deals are arranged bilaterally and with little or no publicly available information. As a result, there is a substantial knowledge gap on what happens to Chinese claims in situations of debt distress and default.

In a new paper (Horn et al. 2022), we help to fill this knowledge gap by assembling an encompassing dataset of sovereign debt restructurings with Chinese lenders from a variety of sources. Since 2008, Chinese creditors arranged at least 71 distressed debt restructurings – more than three times the number of sovereign restructurings with private creditors (we record 21 bond and bank debt restructurings) and higher than the total number of Paris Club restructurings with distressed debtors (68 cases) during the same period. As our earlier work documents, China has become the most important official player in international sovereign debt renegotiations. Moreover, Chinese lenders follow a crisis resolution approach reminiscent to Western lenders in the 1980s and 1990s. Except for symbolic, debt cancelations of small zero-interest loans, Chinese lenders almost never provide deep debt relief with face value reduction. Like their predecessors, they arrange reschedulings that offer some grace period, or short-term cash flow relief. Nominal debt write-downs are extremely rare as are reductions in the interest rates charged. The result is often serial debt restructurings. It remains to be seen whether Russia’s substantive debts to China will follow this set pattern, as has been the case for other oil producers (Angola, Ecuador, and Venezuela, among others). 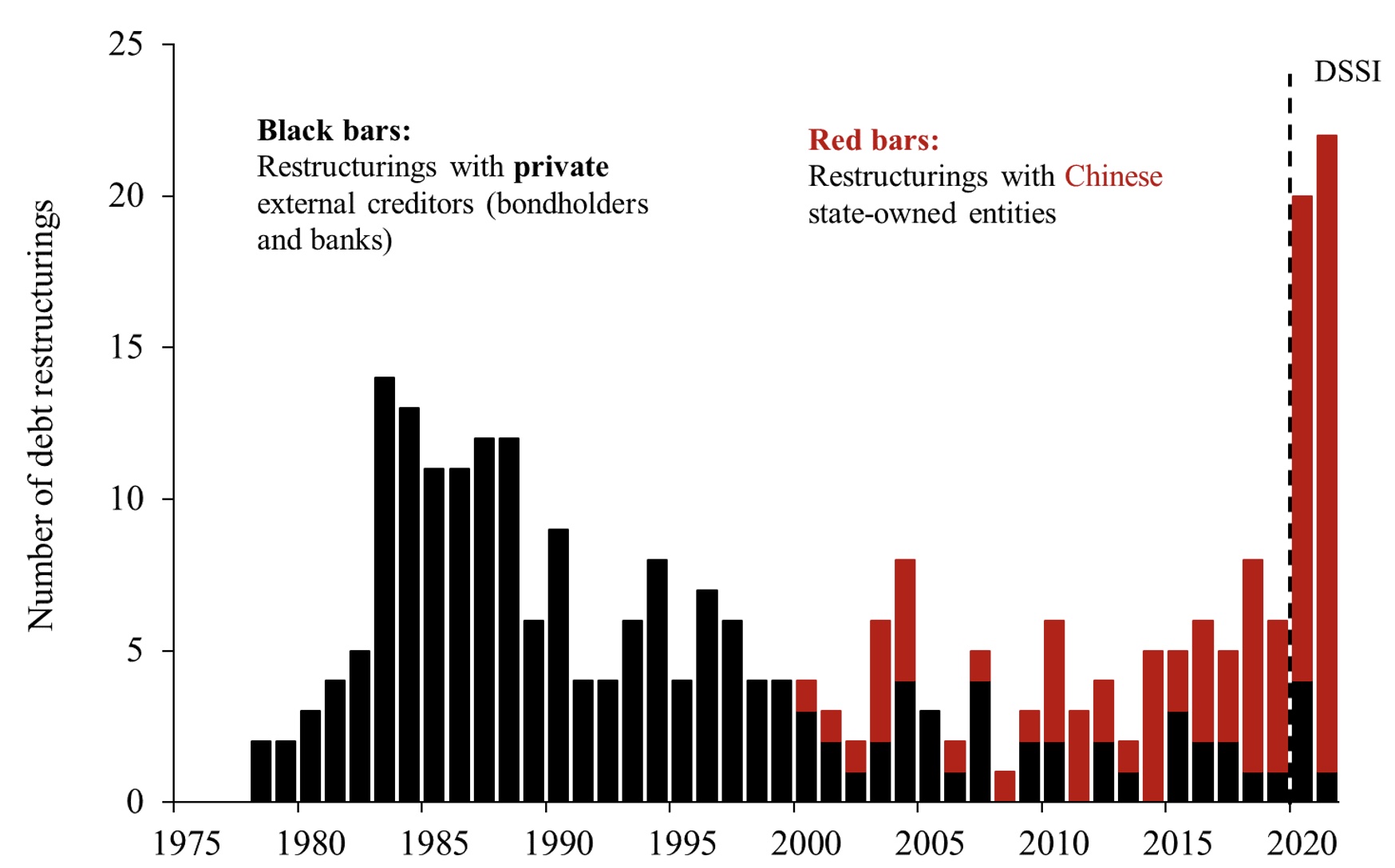 Source: Horn et al. (2022).
Note: This figure combines data on distressed debt restructurings on private external creditors (bondholders and banks) from Asonuma and Trebesch (2016) with those on Chinese creditors from Horn et al. (2022). The Chinese cases include 33 debt reschedulings with countries in high risk of or at debt distress in the wake of the DSSI over 2020-21. To avoid bias, 149 “symbolic” restructurings of minor, zero-interest loans are excluded.

Against this backdrop, it is no surprise that comparatively little is known about the financial link between China and Russia (or China and other countries, for that matter). Data on defaults and arrears are not publicly available. In fact, since 2008, the only ‘truly’ reliable data on sovereign defaults are for sovereign bonds, which are tracked meticulously by rating agencies and the global press.

We do know that China’s state banks use innovative contractual designs with elaborate safeguards against financial and political risk. In this sense, they are better poised to deal with the financial fallout they are now facing. Gelpern et al. (2021) show that a significant share of China’s lending is collateralised, especially to commodity exporting countries. This implies that Chinese lending to distressed countries is not necessarily in default or non-performing but might be serviced through the proceeds of commodity exports. Russia is a case in point: an important share of Chinese lending took the form of advance payments for oil deliveries. Under a 2013 agreement, the state-owned China National Petroleum Corporation (CNCP) made advance payments of at least $30 billion to Rosneft in exchange for long-term oil deliveries through the Russia China oil pipeline. It is highly probable that Russia may continue to service the loans in kind, even if it were to default on other creditors (as was the case with Venezuela) and despite the sanctions imposed by Western governments.

Global Implications: Roadblocks in the Belt and Road?

What are the broader global implications of these developments? Kaminsky and Reinhart (2000) stressed that cross-border financial contagion often arises in the context a ‘common creditor’ (in this case China). When a portion of the loan portfolio becomes impaired, the common lender rebalances risks by lending less to other potentially risky borrowers. The result is less or no new lending and a reduced appetite for rolling over pre-existing debts of other (sovereign) borrowers. This web of cross-border lending sets the stage for a sudden stop – including to borrowers that have no other bilateral trade or finance connections with the borrower(s) in distress (see also Kaminsky et al. 2003, Kalemli-Ozcan et al. 2013, Morelli et al. 2022).

The available evidence suggests that China’s multi-year overseas lending boom had already largely ended and is hitting fresh roadblocks with the Russia-Ukraine war. This is especially bad news for EMDEs, at a time when global financial conditions are poised to tighten as major central banks attempt to rein in rapidly rising inflation. Such a sudden stop impacts much of the developing world who owe large amounts of debt to China. Net transfers from Chinese bilateral creditors to developing country public sector recipients have turned negative in 2019 and 2020 after peaking in 2016 (Figure 4). This means that principal and interest repayments to China now exceed fresh disbursements.3 Chinese policy banks have turned from a source of developing country growth (Müller 2021) into net ‘global debt collectors’. The Russia risks could amplify that trend. 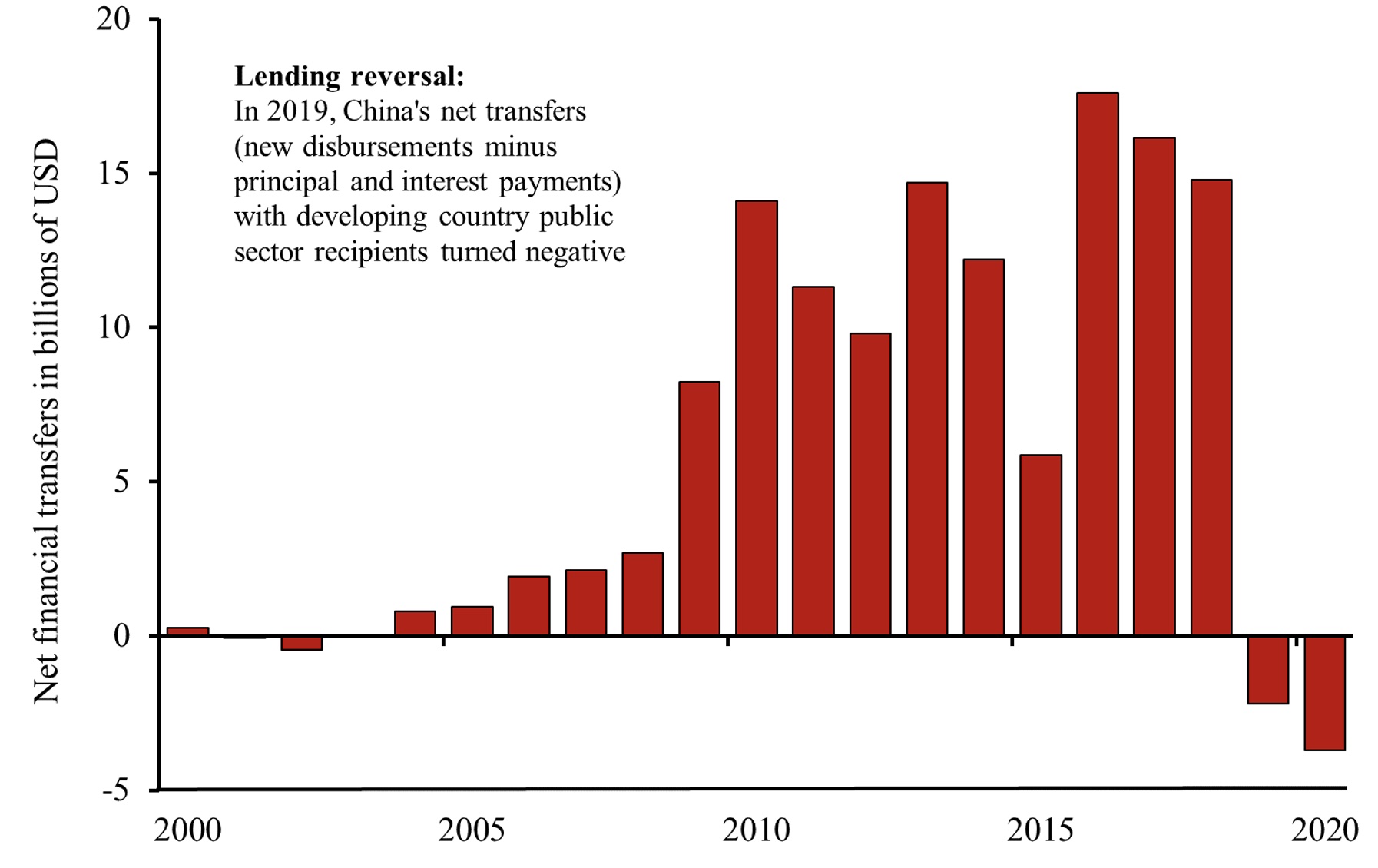 The Global South faces new risks of a ‘sudden stop’ in Chinese lending and ripple effects may be substantial. As Chinese banks face pressure both at home (Rogoff 2021) and abroad, their appetite to provide fresh financing and meaningful debt relief to developing countries is poised to decrease. Moreover, it may become more challenging to refinance existing debts that are coming due.4 Chinese loans have comparatively short maturities (Horn et al. 2021) and need to be rolled over frequently. For many poor and highly indebted countries this implies a growing dependence on Chinese debt ‘evergreening’, because alternative sources of (re-)financing may be unavailable or prohibitive in cost.

In sum, the Russia-Ukraine war is likely to have significant financial implications not just for China and the countries in Central Asia that are closely linked with Russia, but also for capital flows and debt restructurings in dozens of developing countries spanning nearly all regions. Many of these same countries will also be impacted by the rising cost of food and energy, yet another by-product of the war.

Authors’ note: The authors would like to thank Manuela Ferro and Martin Raiser for helpful comments and suggestions.