Yves here. This new OilPrice post makes a point that oil analysts have made elsewhere, that the draining of oil from the Strategic Petroleum Reserves is bullish for oil in the intermediate term, since the stock will have to be replenished, which means more buying in the future.

However, the important additional information provided is that the Biden plan of increasing shale gas production levels in six months, which is when the Strategic Petroleum Reserve releases are set to ens, appears to be mere hope. There are shortages of critical materials for frackers that will limit their ability to ramp up output.

But perhaps the US is not embargoing Russian oil despite Biden’s claims. Reader Glass Hammer pointed to the latest EIA report. Note the line for Russia, with supplies still coming on the week of March 25, when Biden imposed the supposed ban on March 8: 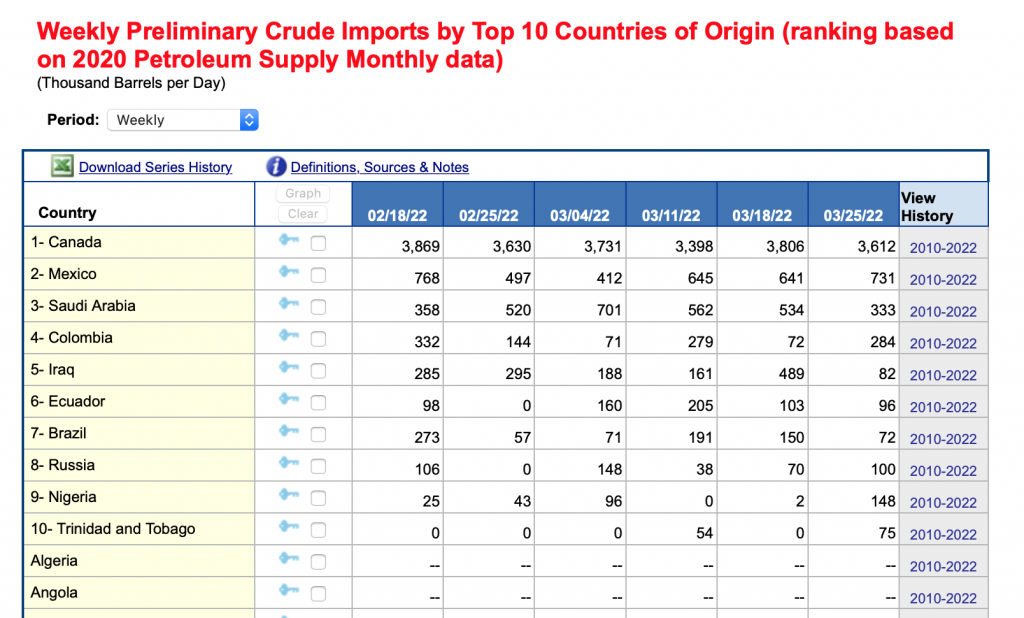 Look closely at the table. Russia is listed as number 8, which as the headline explains: “ranking based on 2020 Petroleum Supply Monthly data”.

But if you look at the amounts supplied by nation the week of March 25, Russia is actually the #6 source, so at least that week, Russia was more important to the US than it had been in the same month in 2020. Russian officials taunted the US about it.

Now this could be an artifact of deliveries, that the US is wink and nodding in cargoes that were contracted before the Biden embargo began. But it may be that the embargo is running on an honor system basis, and not everyone is honoring it. Indirect confirmation comes from this Telegraph India article: Tanker loaded with barrels of Russian oil loses buyer:

A tanker loaded with one million barrels of Russian oil set sail from Murmansk this month, headed for Philadelphia. Then, in the middle of the Atlantic, it did an abrupt U-turn.

The ship, Beijing Spirit, had apparently lost the buyer for its oil. It removed “Philadelphia” as its listed destination, according to the global maritime data provider MarineTraffic, and listed its new destination as “For Orders”, which indicates that the oil on board is for sale…

“Once you put the crude somewhere in a tank on land, it is anonymous,” MVan Schail said. “You blend it with some other crude, load it on another tanker and sell it as European Sour Blend and nobody knows its origin was Russia.” At the same time, at least seven tankers are still sailing towards the US to offload their shipments before the US ban on Russian oil takes full effect on April 21.

So the embargo is not yet stringent. But as other sources pointed out, oil sold into storage is not subject to embargo. So a trader could buy it, take delivery and then resell it. There would be intermediation costs but Russian crude is selling at enough of a discount that it could be an attractive play, even before allowing for the direction of prices likely to be up during any storage/oil laundering time.

This week, the Biden administration revealed that it will release as much as 180 million barrels of crude oil in a bid to calm oil prices, which have remained above $100 per barrel for an extended period of time. The International Energy Agency, meanwhile, is coordinating a smaller but international reserve release of some 60 million barrels and has called an emergency meeting to discuss how exactly to go about it.

It remains unclear whether part of the 180 SPR release in the United States will be a completely separate endeavor or if some of these barrels will be part of the IEA release. Earlier this year, the U.S. had agreed to release 30 million barrels as part of the IEA push. What is clear is that the success of these releases in calming down oil prices is quite unlikely.

The United States last year announced the release of 50 million barrels in an effort to bring down prices t the pump, which were eroding Americans’ purchasing power and weighing on the President’s approval ratings.

This pressured prices for a few days before they rebounded, driven by continued discipline among U.S. producers, equal discipline in OPEC+, and a relentless increase in demand for the commodity.

Then Russia invaded Ukraine, and the U.S. banned imports of Russian crude and fuels. It also sanctioned the country’s financial system heavily, making paying for Russian crude and fuels too much of a headache for the dollar-based international industry. Prices soared again before retreating some, but remain firmly in three-digit territory.

As of mid-March, the Department of Energy said, some 30 million barrels of crude from the strategic petroleum reserve had been sold or leased. That’s more than half of the 50 million barrels announced in November, and it appears to have had zero effect on price movements.

But the new reserve release is a lot bigger, so it should make a difference, shouldn’t it? It amounts to some 1 million bpd over several months, per reports about White House plans in this respect. Unfortunately, but importantly, oil’s fundamentals have not changed much since November.

U.S. shale oil producers, the companies that a few years ago prompted talk among analysts that OPEC was becoming increasingly irrelevant, have rearranged their priorities. They no longer strive for growth at all costs. Now they strive for happy shareholders.

This has given more opportunities to smaller independent drillers with no shareholders to keep happy. Yet these have also run into challenges, mainly in the form of insufficient funding because the energy transition has had banks worrying about their reputations and their own shareholders.

Pandemic-related supply disruptions have also affected the U.S. oil industry’s ability to expand output. Frac sand, cement, and equipment are among the things that have been reported to be in short supply in the shale patch. Now, there’s a shortage of steel tubing, too.

Meanwhile, OPEC is doing business as usual, sticking to its commitment to add some 400,000 bpd to oil markets every month until its combined output recovers to pre-pandemic levels. Just this week, the cartel approved another monthly addition of 432,000 bpd to its combined output despite increasingly desperate calls from the U.S. and the IEA for more barrels.

OPEC has been demonstrating increasingly bluntly that its interests and the interests of some of its biggest clients may not be in alignment right now. It has refused to openly condemn Russia for its actions in Ukraine and has not joined the Western sanction push.

On the contrary, OPEC is gladly doing business with Russia. And Saudi Arabia and the UAE, the two OPEC members that actually have the capacity to boost production beyond their quotas, have deemed it unwise to undermine their partnership with Russia by acquiescing to the West’s request for more oil.

In this environment, releasing whatever number of barrels from strategic reserves could only provide a very short relief at the pump. Then, it may make matters even worse. As one oil market commentator on Twitter said about the SPR release news, the White House will be selling these barrels at $100 and then may have to buy them at $150.

Indeed, one thing that tends to get overlooked during turbulent times is that the strategic petroleum reserve of any country needs to be replenished. It’s not called strategic for laughs. And a 180-million-barrel reserve release will be quite a draw on the U.S. SPR, which currently stands at over 580 million barrels. If oil’s fundamentals remain the same, prices will not be lower when the time to replenish the SPR comes.

This seems the most likely development. The EU, the UK, and the United States have stated sanctions against Russia will not be lifted even if Moscow strikes a peace deal with the Ukraine government. This means Russian oil will continue to be hard to come by for those dealing in dollars or euros.

According to the IEA, the shortfall could be 3 million barrels daily, to be felt this quarter. OPEC+ is not straying from its course. In some good news, at least, U.S. oil production rose last week for the first time in more than two months, by a modest 100,000 bpd.