Yves here. In the US, the idea that voting can change anything seems quaint. And independent of voting serving as a mechanism for registering discontent, most governments have moved to the right, which is what typically happens in the wake of financial crises that fail to produce meaningful reforms.

Another reason to be skeptical of this cheery view is the staggering decline in the competence of political leaders and appointees, along with professional bureaucrats. How many in the West rank as being impressive? I come up with Michel Barnier, Gary Gensler (badly underused at the SEC, he should be Secretary of Treasury) and perhaps Ireland’s Simon Coveney, who is at least canny. Perhaps readers can come up with some more names, but that’s an awfully short list.

Voters often face a key choice between continuity and change. But does voting for change – voting incumbents out of office – deliver better livelihoods for citizens? This column uses data from national elections conducted worldwide since 1945 to show that electoral turnovers lead to improvements in governance, economic performance, and other measures of national performance over the subsequent years. These findings suggest that turnovers play a positive role by bringing in new leaders with better incentives to deliver tangible benefits for the electorate.

Across democracies worldwide, millions of voters are becoming more disillusioned with electoral politics. Many voters report in surveys that their voices are not being heard. Some are increasingly turning to political parties with radical populist platforms (Guiso et al. 2017). This voter resentment may be related to deteriorating living conditions in the West, especially the secular decline of manufacturing employment (Dorn and Levell 2022) and the rise of inequality (Piketty et al. 2017), all of which has resulted in a decline in trust in democratic institutions (Algan et al. 2017). Another factor may be the rise of mobile internet (Guriev et al. 2019), which has facilitated the spread of ‘alternative truths’ and allowed populist parties to thrive in many countries.

Yet another simple explanation might be that elections fail to deliver the improvement in economic livelihoods that voters are asking for. Many voters might feel that, after all, elections do not really matter for their welfare. We explore this hypothesis in a recent paper (Marx et al. 2022), where we compile a new dataset of national election results from around the world since 1945. Our main research question is simple: we ask whether ‘voting for change’, namely voting incumbent candidates or parties out of office, delivers improvements in governance, economic performance, and other measures of societal welfare.

This research question is central to the study of all elections. Short of staging a revolution, casting ballots against the incumbent is the only way under a democracy that citizens can change their national leadership. In the words of Adam Przeworski (1991), elections reflect the most fundamental characteristic of democratic systems – their ability to process social conflict and power transitions in a non-violent way.

Addressing this question raises a fundamental problem. National elections are not random events, and their outcomes correlate with a variety of underlying economic and social factors. In particular, incumbents who struggle to win re-election may have performed relatively poorly or faced particularly adverse economic circumstances (Brender and Drazen 2008). Other studies have shown that economic downturns combined with low levels of trust affect the likelihood of leader turnovers across countries (Nunn et al. 2018).

We therefore compare the performance of national economies after the close re-election of an incumbent candidate or party, relative to the close election of a challenger candidate or party. We use state-of-the-art regression discontinuity techniques to estimate the effect of electoral turnovers close to the regression discontinuity cut-off, i.e. for those elections where the opposition only narrowly edged out the incumbent candidate. In these cases, we show that the electoral outcome can be considered almost random.

Until now, close-election regression discontinuity techniques had almost exclusively been used to study local or regional elections (see Girardi 2020 for an exception). Our large dataset of presidential and parliamentary elections allows us to extend this approach to the national level and evaluate the impact of turnovers across a large sample of countries (Figure 1).

We show that electoral turnovers improve the performance of countries along several dimensions. For example, an electoral defeat of the national incumbent candidate or party results in an improvement of 0.34 standard deviations in economic performance on average during the following four years. This is mainly driven by a relative decline in inflation and unemployment after the close election of a challenger. These effects are large in magnitude and materialise gradually over time: the boost in economic performance is largest three years after the close election of a challenger candidate or party.

Figure 2 provides a visual illustration of these effects, measured either across the four years following a national election (left-hand panel) or for each year in the subsequent electoral cycle (right-hand panel). We also estimate an improvement of 0.22 standard deviations in a general index of country performance combining economic indicators (GDP per capita, inflation, and unemployment), international trade, human development, and indicators of peace and democracy. 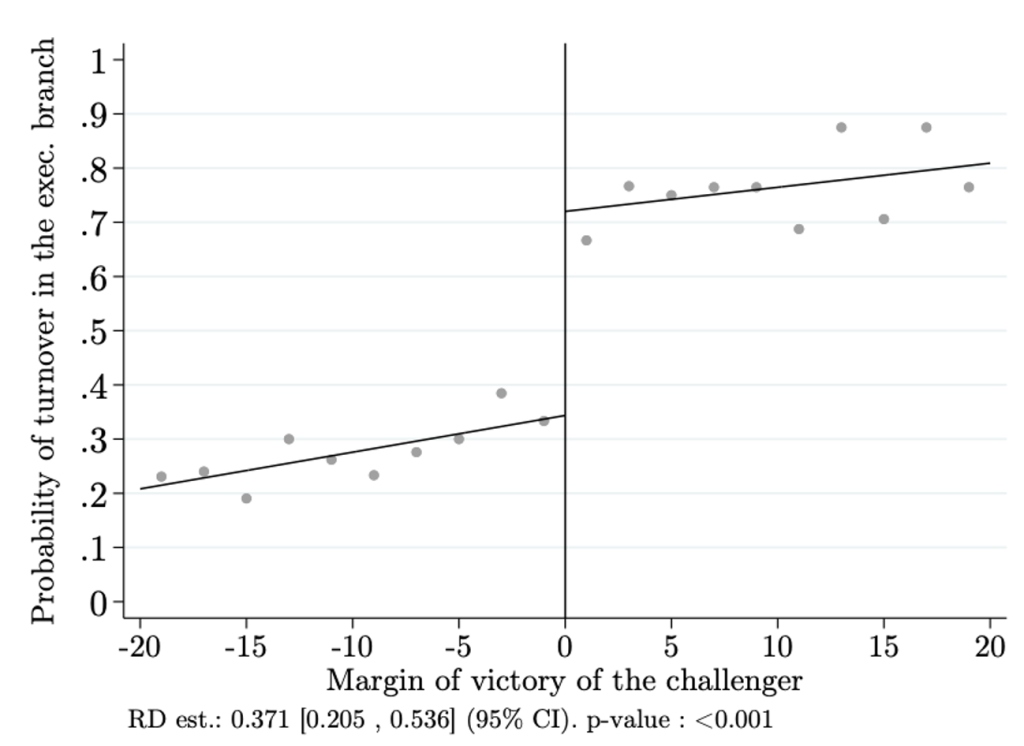 Furthermore, turnovers matter more when the member of the executive appointed following the election holds more power, and when there are fewer institutional constraints on them. These effects are intuitive: weaker checks and balances and stronger executive powers vested in national leaders translate into more consequential electoral outcomes at the national level.

We provide additional evidence showing that the positive effects of electoral turnovers likely hold for elections further away from the regression discontinuity cut-off, namely elections that are less close. Using a method developed by Angrist and Rokkanen (2015), Figure 4 shows that the increase in economic performance resulting from a turnover also holds for elections won by a larger margin. Furthermore, we show that ‘unlucky incumbents’ who face close re-election battles as a result of a global oil shock perform no differently from other incumbents (Arezki et al. 2020). This suggests that the effects we find are not driven by the poor quality of incumbent candidates in our sample of close national elections.

Figure 4 Effects of turnovers on economic performance, away from the regression discontinuity cut-off 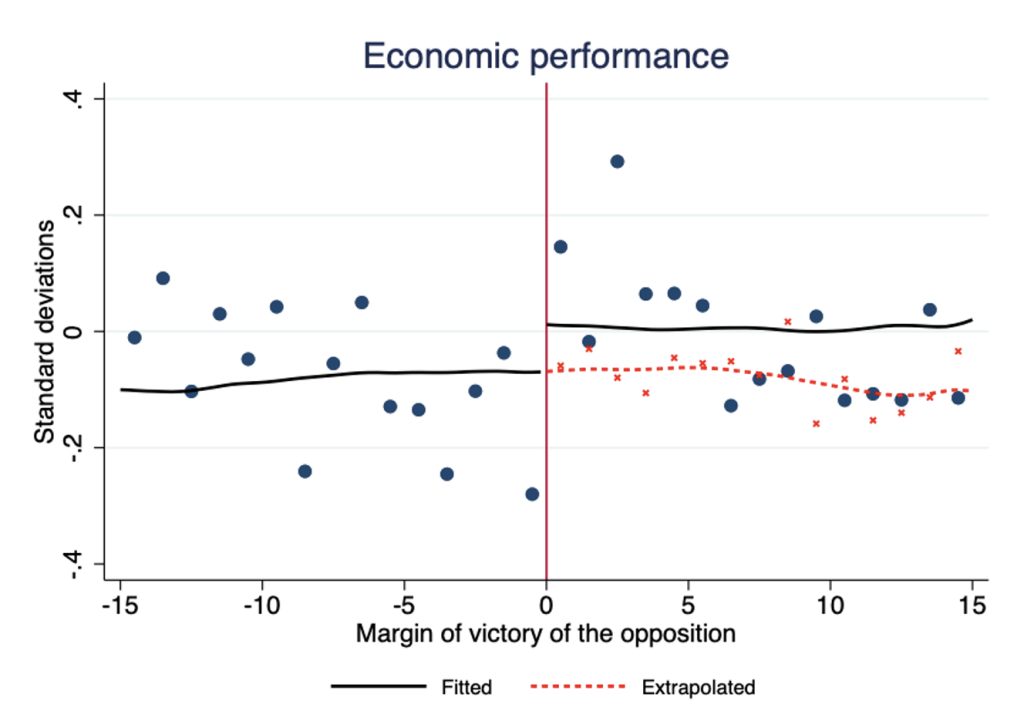 Overall, the effects we find are surprising since there are many reasons to expect that electoral turnovers could negatively affect a country’s performance – for example, by bringing to power less-experienced political leaders (Alt et al. 2011), by increasing policy uncertainty (Alesina et al. 1996), or by creating instability in bureaucratic personnel (Akhtari et al. 2022). Instead, our results suggest that turnovers improve leaders’ incentives to perform well and to deliver tangible benefits to their electorate.

Indeed, turnovers also improve the quality of governance and reduce (perceived) corruption, a standard measure of politician performance in the political economy literature (Ferraz and Finan 2011). A possible interpretation is that reputation and re-election concerns are likely more important for newcomers to political office, relative to long-serving incumbents (as in Ashworth 2005). The French have a phrase, ‘l’usure du pouvoir’ (‘the erosion of power’), which captures this intuition.

Our detailed data allow us to rule out a range of alternative explanations, most notably the possibility that electoral turnovers bring to power leaders with different characteristics. We show that, on average, challengers who win close national elections are no younger, no more left-wing, no more populist, and no less liberal than re-elected incumbents. In addition, the close election of a left-wing candidate or an illiberal candidate has no discernible impact on country performance, in sharp contrast with the large effects of electoral turnovers we observe in our data.

Previous research has shown that democratisation episodes tend to improve economic growth (Rodrik and Wacziarg 2005, Acemoglu et al. 2019). Our results offer some reasons to be cautiously optimistic about the long-term prospects of electoral democracy. Without regular turnovers in national leadership, societies can fall into institutional sclerosis and economic stagnation because they fail to implement disruptive policies, as Mancur Olson (1984) famously observed. Democracy, in its various forms, remains the only political system with a built-in mechanism to engineer frequent leader turnovers and policy change. As such, citizens would be ill-advised to do away with these systems in favour of more autocratic regimes.