It looks like the efforts to bolster the creaky European consensus for continuing to provide unquestioning military and economic support for Ukraine is starting to backfire. Even though the Orban government in Hungary has been a lightening rod of criticism for its refusal to back an EU oil embargo (it finally won a carveout of pipeline oil, the type it uses), weakening support in Italy is likely of much greater concern to Eurocrats. And it looks like an gambit to discredit some of the high profile Ukraine skeptics has backfired.

As we’ll discuss in detail, the leading newspaper, Corriere della Sera, published a list of a dozen “filoputiniani” or “Putin lovers,” on Sunday. An editorial in Il Foglio lists some of its members. Per a machine translation:

Among the profiles published by the via Solferino newspaper is Vito Petrocelli, a senator expelled from the M5s [Five Star] and dismissed from the role of the president of the Senate Foreign Affairs Commission. Laura Ruggeri, freelance journalist, who writes articles in the pro-Putin Strategic Culture Foundation magazine. Then there are Alessandro Orsini, Professor of Sociology of Terrorism, often a guest on television broadcasts and political debates, Maurizio Vezzosi, freelance analyst and reporter, Giorgio Bianchi, photojournalist who manages an account with over 100,000 subscribers. And again: Claudio Giordanengo, dentist in 2019 candidate with the League [Lega Nord]; Manlio Dinucci, promoter of the “No Guerra No Nato” committee; Alberto Fazolo, economist and freelance journalist who fought with the separatists in Donbas.

It was obvious that this material was leaked, presumably from the intelligence services, so then the question became how. The first target of suspicion was Copsair, which translates as Parliamentary Committee for the Security of the Republic and supervises the various spook services. But if you read the first part of the Il Foglio editorial, its chairman denies that Copsair asked for investigations and was not the source of the leaks. Of course, the intel types could have provided the dossiers to Copsair and been annoyed it hadn’t acted on them.

Our DLG, Reality Czar, who alerted us to this story and has read most of the major accounts in Italian, provided this overview:

Corriere della Sera did an enormously stupid thing, proving one more time that the big establishment papers are in bed with the “intelligence community” and like it.

So a dozen people were listed and photos published in the Sunday edition of the paper of the “filoputiniani” (Putinlovers) who are passing along propaganda. There is now an enormous scandal. The word McCarthyism is being used here. La sporca dozzina, the dirty dozen, according to Marco Travaglio, who is one of them.

As Fatto Quotidiano remarks—but they didn’t include Pope Francis, who has criticized the war in Ukraine quite directly and clearly.

Massimo Cacciari, who has also insisted on a negotiated settlement with Ukraine likely going neutral, is wondering why he didn’t make the list.

Screen capture below. Some of this is local politics that I can’t expect you to get. But it is part of the rapid breakdown in consensus, which leads back to the incompetence of the U.S. and U.K. elites. (Bojo is not admired in Italy.) 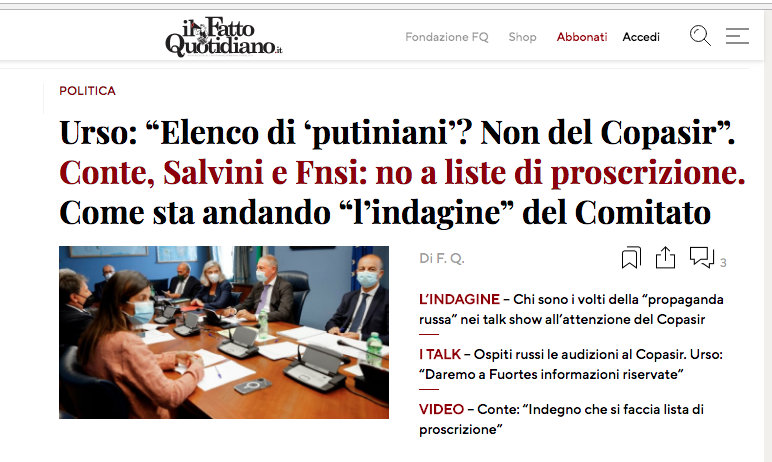 Keep in mind that the impetus for this leak may be that there is supposed to be a vote in parliament, finally, on 21 June or thereabouts on Italian participation in the Ukraine war. Right now, as in the USA, the war is being carried on without parliament’s assent or oversight. This is Giuseppe Conte’s big criticism, and he is instrumental in forcing the vote. Tied to this is Article 11 of the Italian Constitution, which does not allow participation in aggressive war (defense of the borders only), which is being invoked by many commenters these days. The result is that Article 11 likely doesn’t allow shipment of armaments to Ukraine. More impetus to embarrass the dissidents.

Note that the dirty dozen are not not the most prominent war doubters in Italy. Matteo Salvini, the head of the Lega Nord party, and not-yet-devoid-of-influence former prime minister Silvio Berlusconi have been questioning the cost to Italy.

Italy had also tried to revive peace talks, albeit by presenting (apparently informally) a four point plan that was wildly short of anything Russia might consider. But in keeping, a few days before Henry Kissinger said what seemed to be unthinkable at the World Economic Forum, that Ukraine needed to negotiate with Russia and be prepared to cede territory, Prime Minister Mario Draghi called for a ceasefire and tried to finesse the issue of whether Italy would provide Ukraine with more arms. Note that in addition to the constitutional question, key members of Draghi’s coalition are also opposed. From Reuters on May 19:

“A ceasefire must be achieved as soon as possible,” Draghi told the upper house Senate…

There is little public support in Italy for supplying military assistance for Ukraine, opinion polls show….

“When someone, even in this House, repeats the call to send in more weapons … I won’t stand for it,” said League leader Matteo Salvini, addressing the Senate after Draghi.

The 5-Star’s lower house leader Davide Crippa said arms shipments were “not effective in building peace” and called on Draghi to show “more courage” by holding a vote on the issue.

More detail on the growing political scandal from DLG:

Some quotes from today’s Fatto Quotidiano, which is highly incensed.

According to Marco Travaglio on the front page in a column called The Dirty Dozen, the secret services were indeed gathering dossiers on journalists, intellectuals, and politicians who are dissenting and not toeing the dominant line of thought (which would have Draghi and the Partito Democratico as the main exponents). These dossiers were leaked to Corriere della Sera, which published details on the dirty dozen, along with their photos.

As in any political crisis like this, the intelligence “community” isn’t talking, and the parliamentarians are claiming not to know. Critics are asking why there was no oversight.

nside the paper, Ilaria Proietti has a newsier discussion of the scandal, in which she points out that one odd coinkydink is that Vito Petrocelli, also 5Stars, like Conte, was just forced out as chair of the parliamentary committee on foreign affairs—and now finds himself on the list as a “filoputiniano.” The implication is that the intelligence community was investigating him as a parliamentarian, which is against the law.

Giuseppe Conte is quoted by Proietti as calling them investigations (presunte inchieste) and uses the term “proscription lists,’ which goes back to ancient Rome and is a rather bloody reference.

Massimo Cacciari is quoted in a third article, an interview with Tommaso Rodano, as saying that he thinks parliament didn’t know about the dossiers/investigations. Yet he also uses the word “vile” to describe the events. Let’s revive the word “vile,” please.

As always with Our Dems, they can’t wait to fail. There’s an embarrassing quote from Enrico Borghi in the Proietti article in which Borghi brushes it all aside with “we’re at war to defend the republic” stuff. “Balle,” as we say here.

So there is some mystery, just as when dealing with Mr. Big Jim Comey, as to how these dossiers and accusations escape from the secret services. If we go by U.S. practices, the dossiers do exist—something Marco Travaglio considers almost normal—but the leaks and manipulation are well timed indeed.

Finally, Alessandro Orsini, one of the dirty dozen. is threatening to sue Corriere della Sera for defamation. More background from DLG:

Orsini is a professor at LUISS, the business school in Roma (kinduva MBA program), originally started by and supported by Confindustria, you know, that organization that thinks the minimum wage should be 9 euro/hour and that labor costs have to go down. He is a prof of international relations with a specially in study of terrorism.

He has been in a controversy about his appearances on TV. In particular, he has caused controversy by contradicting the prevailing views of the war on Ukraine on a show called Cartabiancq,

The funny thing about Alessandro Orsini is that he looks like the typical earnest junior professor—tall, skinny, disorderly blond hair. He looks harmless, and he has shaken things up considerably. He’s a good writer—his columns are highly readable.

Remember that Italy has been in a slow-moving depression since the end of the financial crisis. It was particularly hard hit by Covid due its close connections to China (fashion industry), its aged population, and its thinned-out hospitals (a side effect of austerity). It still has the weakest banks in Europe and they happened to be particularly exposed to Russia (Unicredit was still hemming and hawing about what to do about its Russia operations. It’s just “widened” its search for buyers, which Mr. Market weirdly took as positive, when that means they haven’t found anyone yet who will meet Unicredit’s minimum). And Italy is the second biggest buyer of Russian gas, after Germany. All of those add up to the sanctions blowback being particularly painful when there wasn’t much enthusiasm for the war from the get go. So this dossier scandal could put simmering tensions on a full boil.